Mahindra’s XUV700 has been going through a lot of ups and downs. Earlier this month, Mahindra recalled the AWD variants of the SUV for inspection of the propellor shaft bolts. After that, Mahindra issued another recall for the replacement of rear wheel coil springs.

On the other hand, Mahindra also announced that bookings for its flagship SUV crossed the 1.5 lakh mark. Those who booked the SUV will have to wait, as the waiting period extends to more than a year, depending on the variant/colour combination. So far, Mahindra has delivered about 42,000 units of the XUV700. This means more than 1 lakh customers are still waiting to bring the XUV700 home.

Meanwhile, the customers who were able to bring the XUV700 home have to face multiple recalls. Thus, we say that the XUV700 has been having its share of ups and downs. The SUV was in the news for a recall, new bookings milestone and now, again for a recall. In one way, it is good to see the automaker issuing recalls for issues. However, the number of issues is a bit concerning. Seeing the recall news could also lead to customers cancelling their bookings.

The company has now issued a “critical recall alert” for its flagship SUV. The issue pertains to the alternator belt and auto tensioner. The exact issue is unknown. However, Mahindra has directed all the service centres to replace both the parts on the XUV700. Sources also suggest this recall only applies to the AWD variants, although there is no confirmation.

In addition to this, Mahindra has also initiated a recall for flashing the Electronic Steering Column Lock (ESCL). The same is visible in the photo from the source. Both the recalls fall under the “Red” recall type. Therefore, XUV700 owners must check if their vehicle is a part of the affected vehicles. If it is, these owners should get the necessary repairs done as soon as possible. 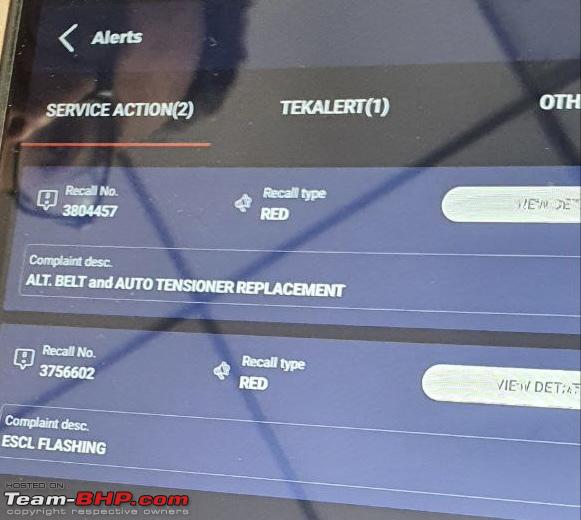