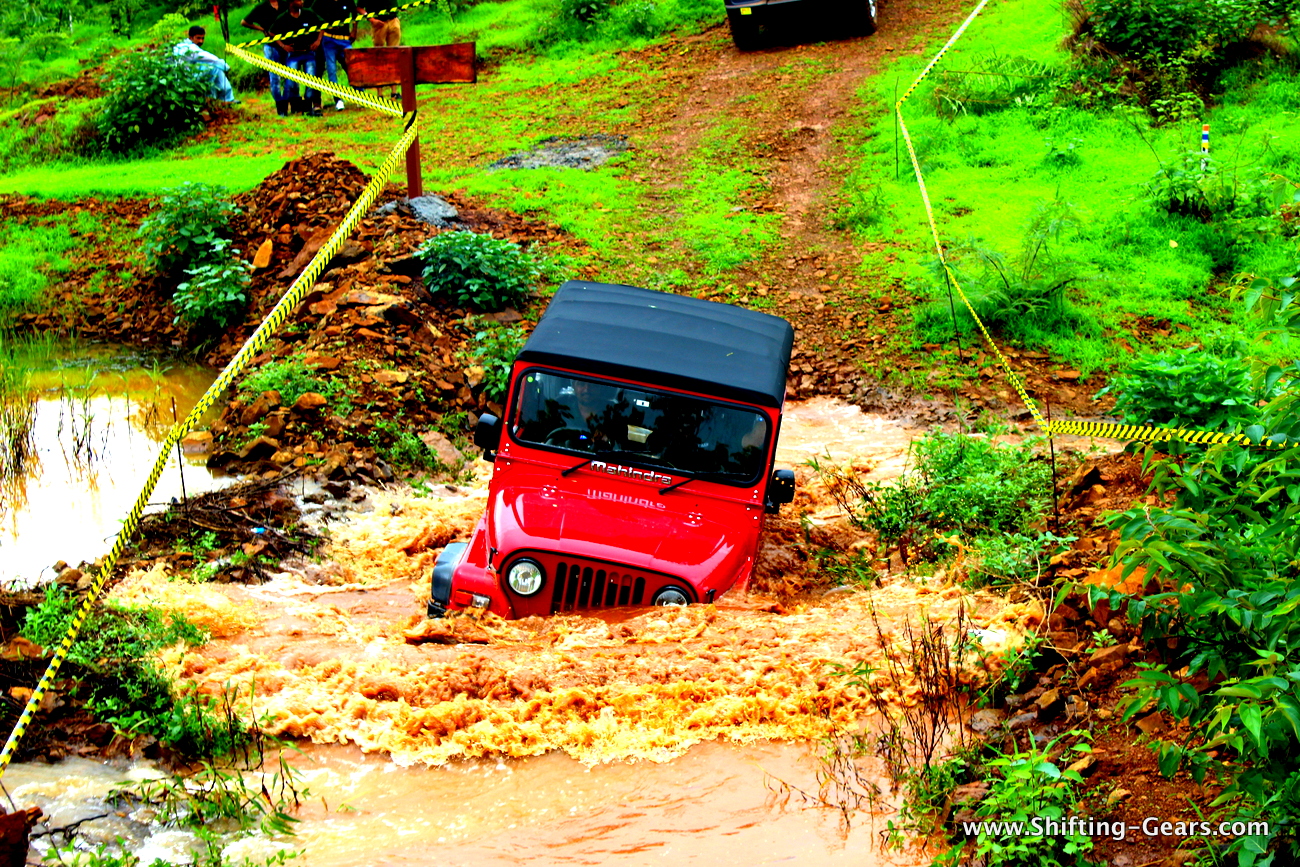 Mahindra likes to call it an icon, and we do not deny that. Mahindra has recently introduced the facelift Thar CRDe 4×4 in India priced at Rs. 8.03 lakh (ex-showroom Nashik).

Launched almost half a decade back in 2010, the Mahindra Thar is the only true off-roader available off the shelf as a brand new model. The Thar is a predecessor to the MM540 which was discontinued long ago. The only reason the Thar came into existence was the gaining popularity of off-road activities here in India and even those who loved to do more on their weekend getaways. 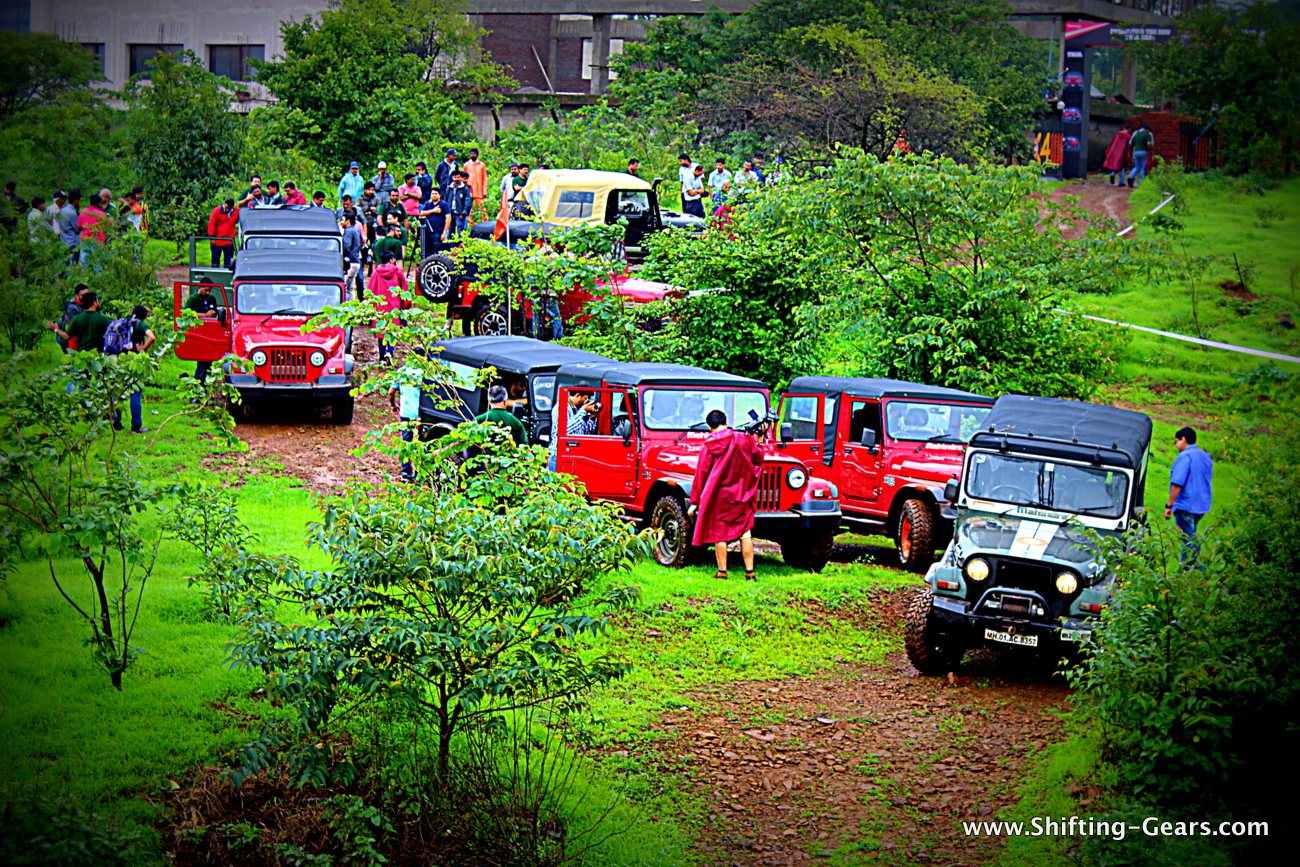 Adding clarity to this facelift scenario, Mahindra has only introduced updates on the top-spec CRDe variant, and not on the workhorse DI model. Mahindra claims that for the utilitarian purpose that the Thar DI is put to, these new set of upgrades were unnecessary & would have resulted in higher prices which would have lead to a negative impact on sales.

The That continues to be built at Mahindra’s plant in Nashik & is not really a hot selling product. It is not really a hot selling model with sales numbers rarely over 1,000 units a month. With this update, Mahindra is trying to attract those buyers who want to drive on roads unknown, but with relatively better features now. Mahindra invited us to test the Thar’s capabilities at their off-road facility near Igatpuri in Maharashtra & here is what we found out…

Exteriors:
The Mahindra Thar is a mid-sized full-blown off-road SUV. And in its exterior skin, it does shout out to be very comfortable out in the wild. With the facelift, the Thar does try to pose a bit harder than before to appeal to a new audience while not offending the fanboys too much. While looks are subjective, we think Mahindra has done a decent job to incorporate changes, although they’re limited. 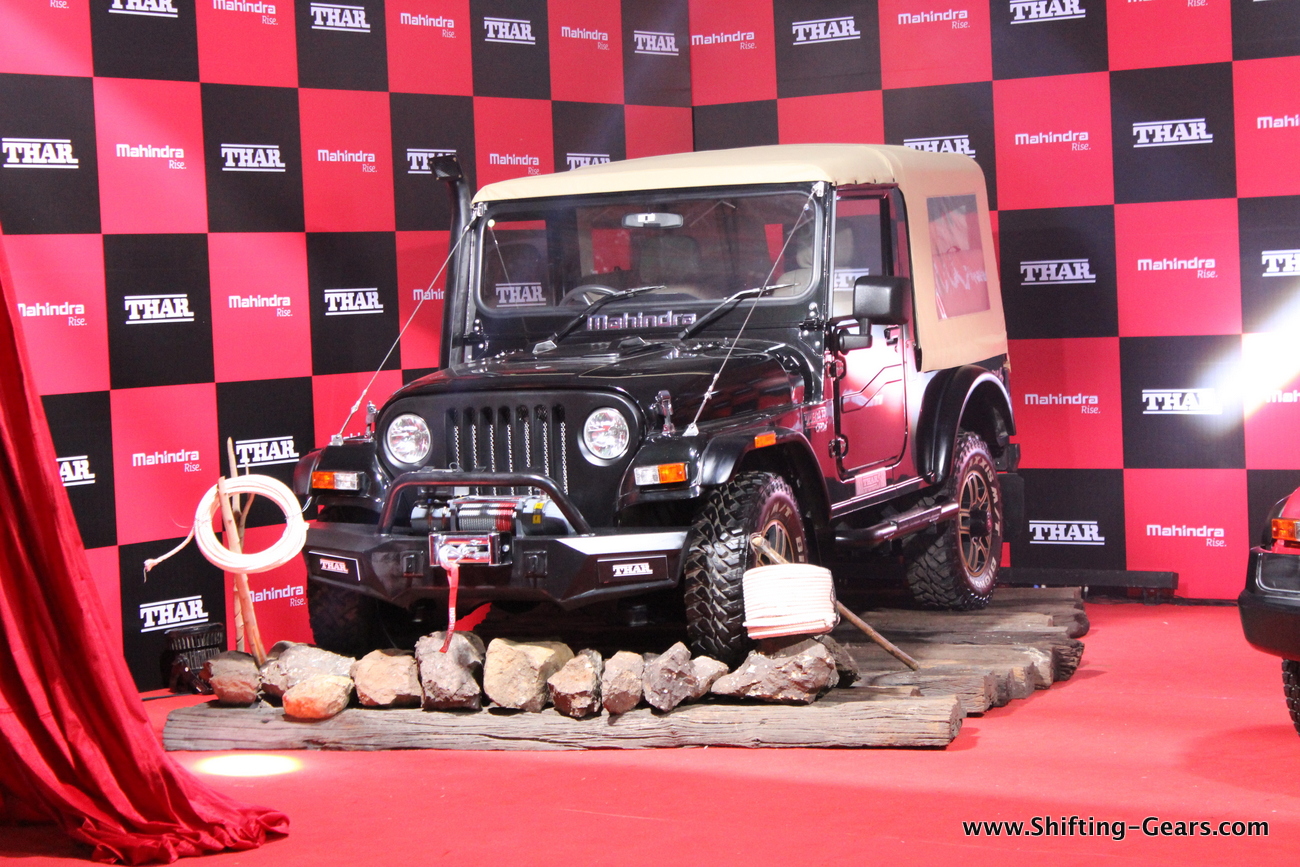 At the front, to the unknown, there’s no significant change which can easily help distinguish this as a newer model. Look closely, and Mahindra has restyled the front bumper. The primary reason for doing this is that the CMV regulations state that there should be no gap between the bumper & main body of the vehicle. Hence, these new bumpers try & stick to the front body as closely as possible. Mahindra likes it the cheesy way and have ‘THAR’ embossed on this black bumper, just under the conventional front grille. Headlamps are now of the clear lens plastic category, and not glass. Apart from this, everything else remains the same with turn indicators mounted above the bumper on either side, the typical bonnet with release levers on either side, an almost vertical front windscreen, etc. Wiper linkages are new, since existing customers gave a feedback that they wouldn’t remain functional for long.

Come to the side, and again, you’ll barely notice any changes. The body work remains identical to the pre-facelift model. What adds some spice here are the new black plastic wheel arches. Not only do they add some visual appeal, they also help owners who install spaced out alloy wheels. Another change seen here is the new side step, in black. This is a must to help you get in & out of the Thar. We wish it had some more grip because when wet, your foot can slip on this. Mahindra has also redesigned the canopy which now is sloping at the back, and not really flat. The canopy continues to have a plastic section which allows light inside so that rear passengers do not feel claustrophobic. The material used for this canopy is also different. Everything else including the Thar badge on the front fender, 4×4 badge on the rear fender was seen before. At this price though, we wish Mahindra should have been a little kind in offering alloy wheels as a part of standard equipment. For an almost bare-bones vehicle costing over Rs. 9 lakh, alloy wheels would have surely sweetened the exterior package. 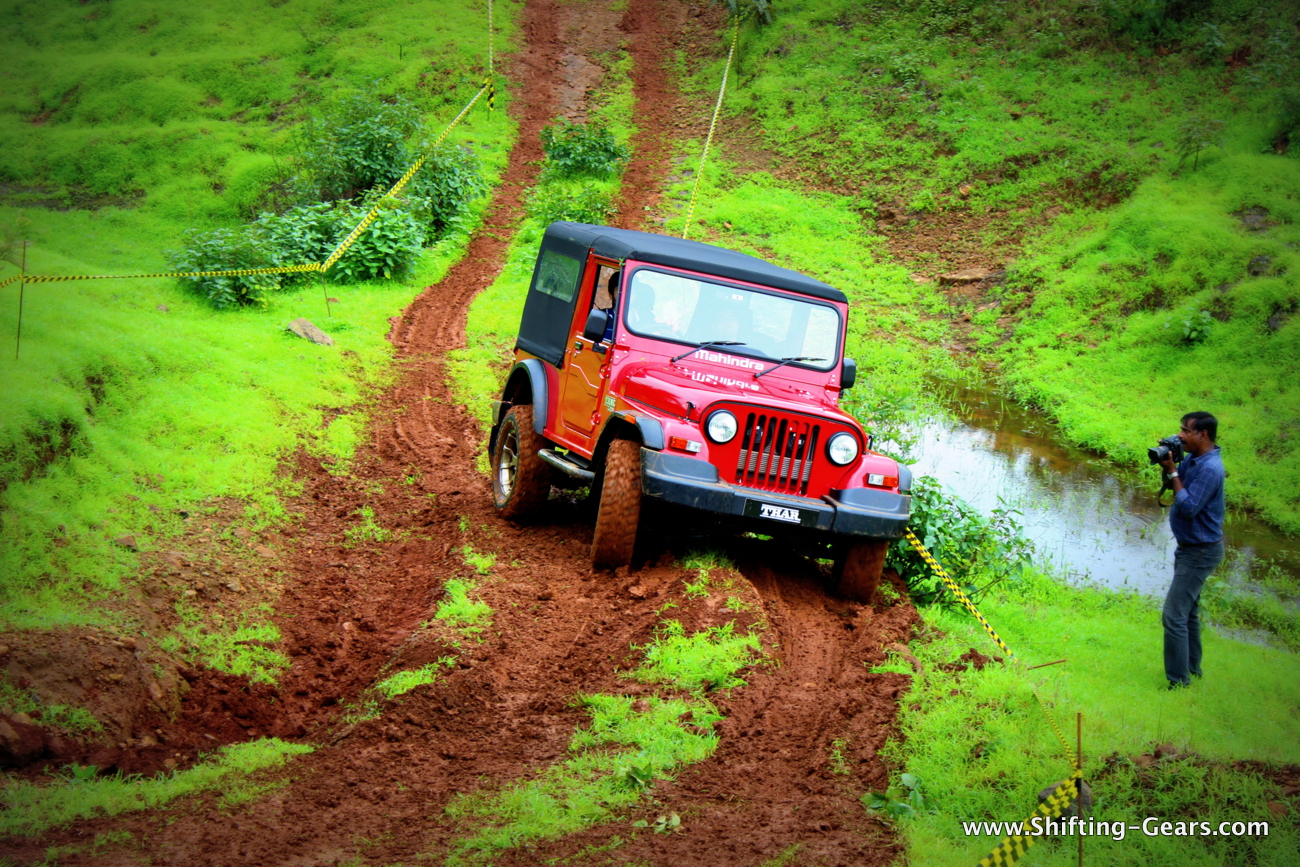 At the back, Mahindra makes use of revised rear bumpers. Tail lamps, number plate placement, reflectors, etc. are standard affair. Spare wheel is conventionally mounted on 5th door. Exhaust pipe is twisted to direct gases to the right. The locking mechanism of the 5th door was a bit buggy & did not function as easily as we expected.

There’s nothing really to talk much about the Thar’s exteriors. It continues with the world war inspired, typical JEEP-like look & we really love that. We’re glad that there wasn’t too much of messing around.

Interiors:
Most owners & potential customers for the Thar have been complaining that inside, the car felt more like a substandard commercial vehicle rather than a model designed to attract enthusiasts. Mahindra have now tried their bit to add some glamour to the interiors of the Thar, and we think this is a decent attempt, but not the best.

The new Thar now gets a completely redesigned dashboard with beige & black interior theme. Beige is used in abundance inside the cabin which does make the interiors feel roomy, even though they’re quite cramped in reality. The dashboard also sits a bit higher than before, but does not interfere with the visibility department. There’s a new 3-spoke steering wheel with silver inserts which does is decent to touch & feel. It’s even contoured to rest your thumb. The steering wheel is now placed much better after it has been moved a bit to the right. Remember the old Thar owners complained that the steering wheel was offset to the left? Behind, you get a 3-pod instrument cluster with chrome surrounds which try to make the interiors feel a bit premium. The leftmost section houses the fuel & engine temperature gauge, speedometer in the center & tachometer to the right.

Center console by default comes with a XL sized ‘Thar’ faceplate. This is actually a placeholder for your double-din infotainment system. Below, you get round AC vents with silver accents which are placed a bit too low to direct cool air on your face. You can twist the silver ring to shut down a particular vent. AC controls seen below are easy to use, but horrible in the touch & feel department. AC performance is average, even on a cool & rainy day. On a hot summer day, the AC will struggle to keep you cool. Front demister has also been introduced. There are 2 cupholders on the floor console ahead of the gear levers. The gear knob also gets silver accents. Mahindra now offers a lockable glovebox with the updated Thar and there is a dashboard mounted grab rail for the front passenger. 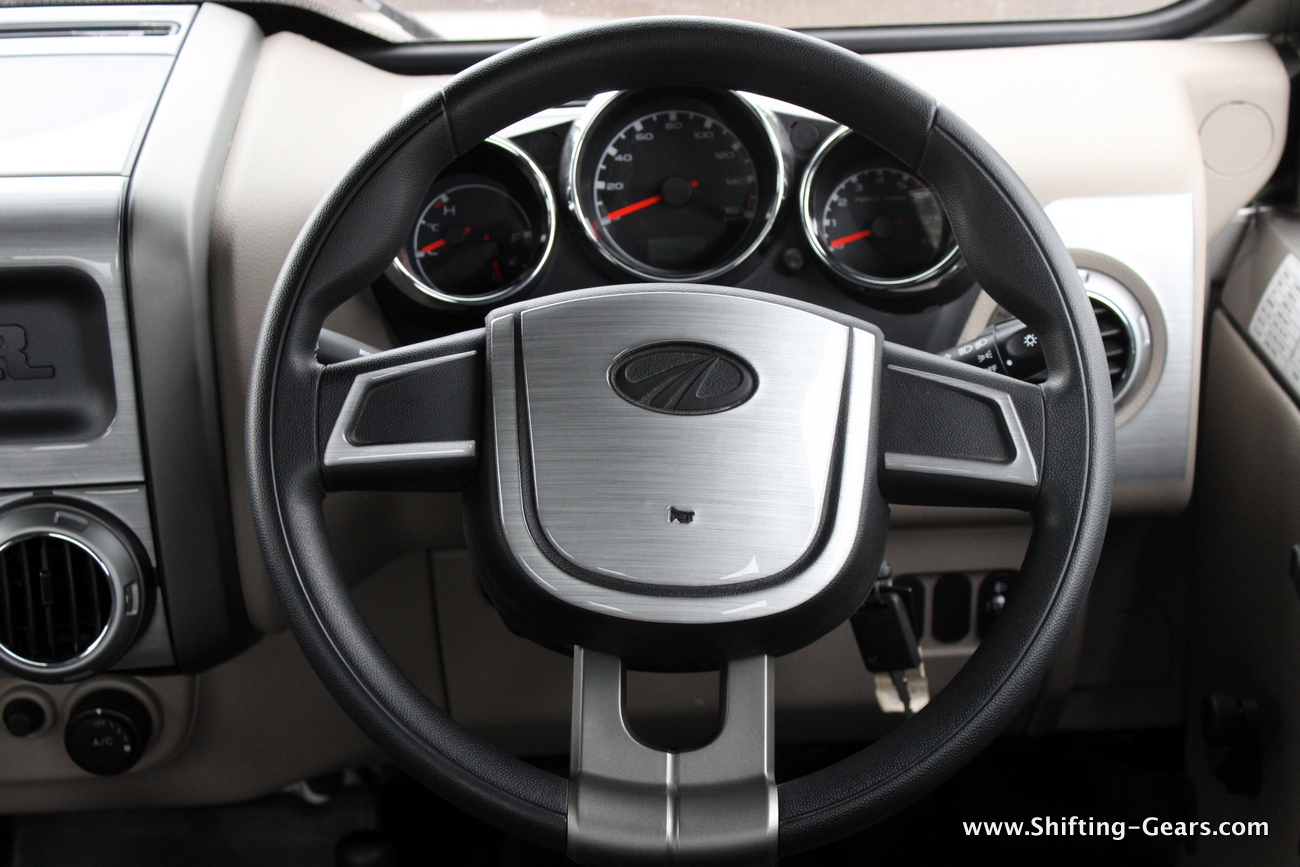 Just informing the unaware, the Mahindra Thar is a 7-seater SUV. It offers 2 front seats & 2 side facing seat bench for rear passengers. On the updated Thar, Mahindra offers new art-leather seat covers which do feel better than the quality of fabrics they use on other models. Seats are average & there’s nothing to talk more about them. A visit to the aftermarket is necessary if you need more supportive seats at the front. Getting in & out of the Thar is a task & a bit flawed too. The opening to get inside is rather small & given that you have to climb, finding the ideal way to get in will take some time. 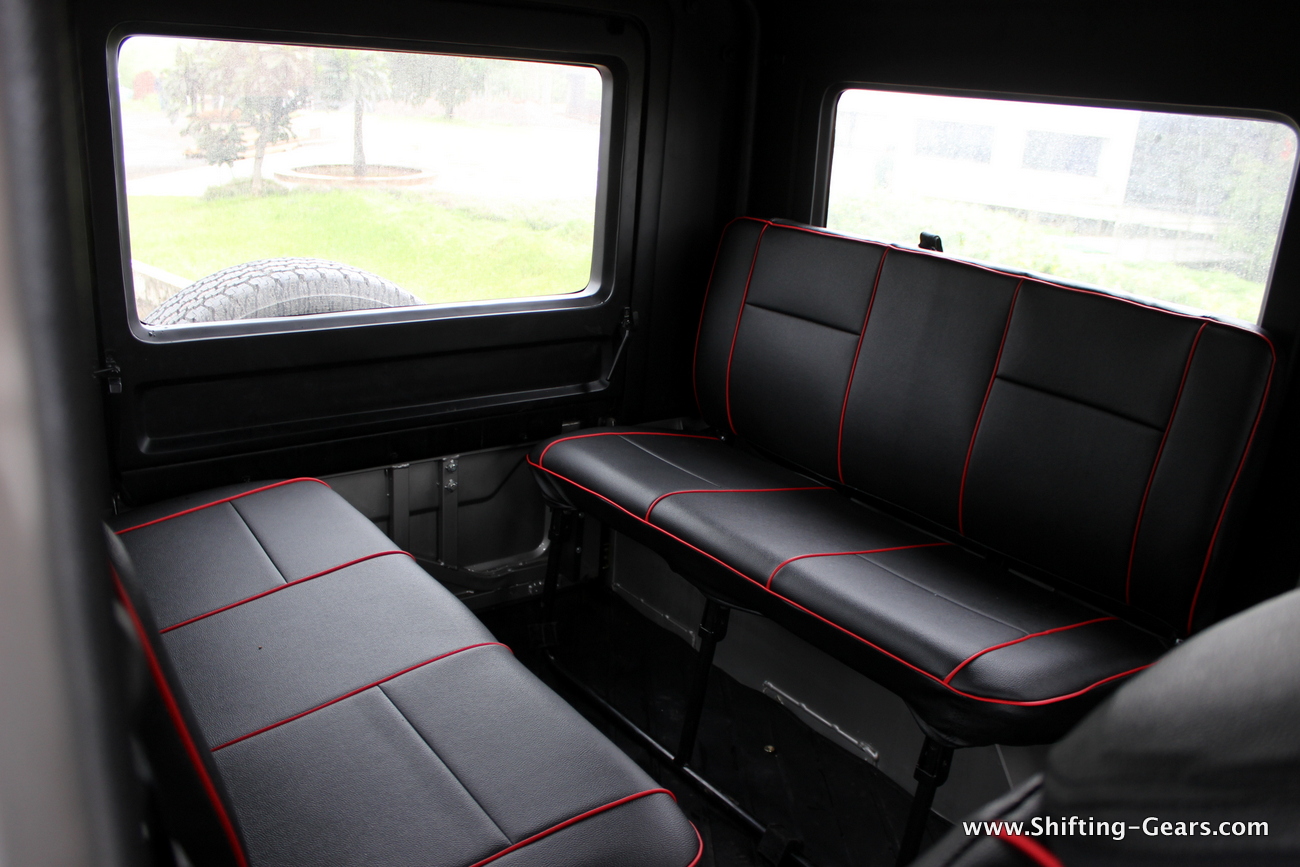 Overall, there’s significant changes on the inside. But, the quality of plastics used is very, very rudimentary. It just does not feel like you’re inside a Rs. 9 lakh vehicle with the Thar. Even the key which Mahindra offers is so ugly & cheap, you will never want to flash it. Even the Mahindra Gusto scooter has a much more glamorous key.

Long journeys in the Thar will be a big NO! From the owner (driver) as well as other occupants.

Engine, performance & handling:
Mechanically, the Thar does not get too many changes. 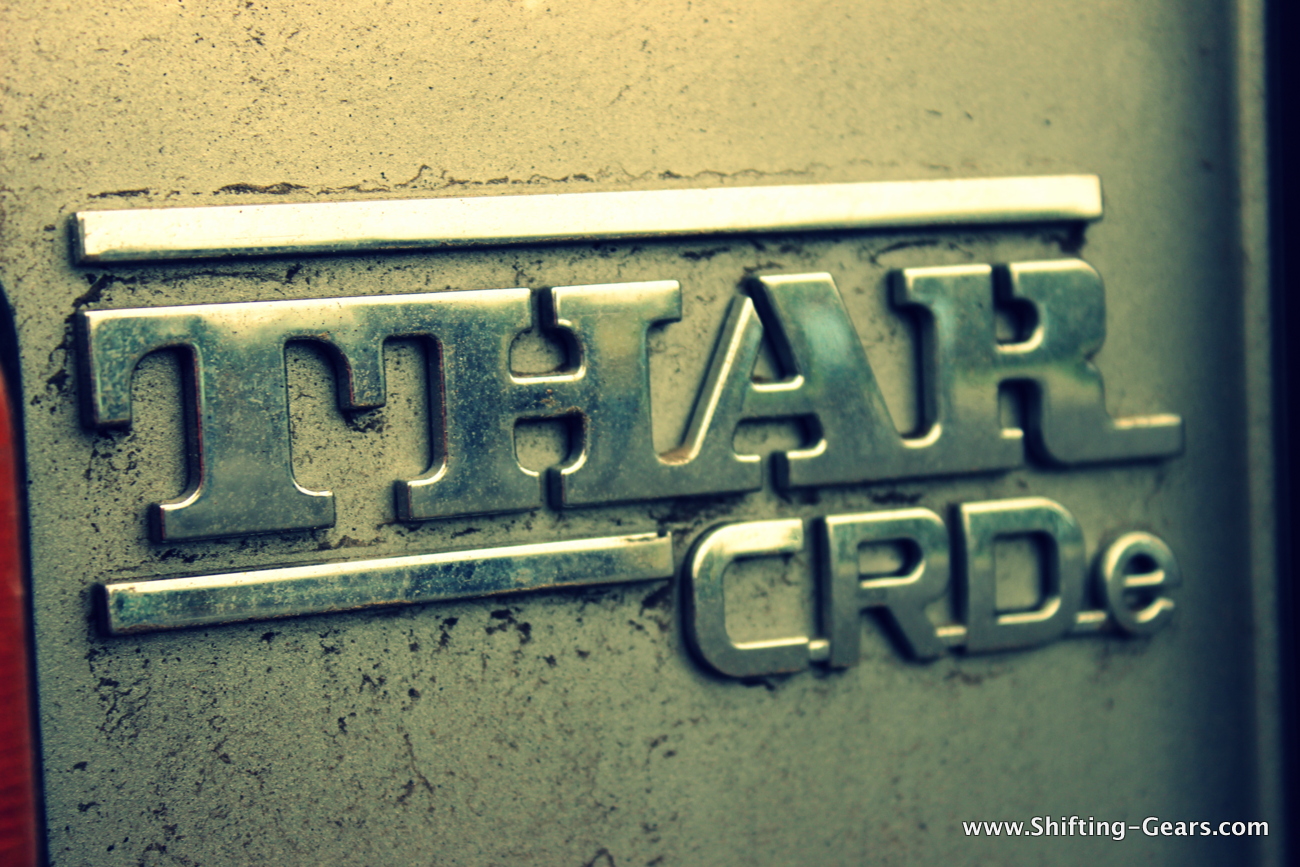 The Thar CRDe is powered by a 2,498cc, 4-cylinder, turbocharged diesel motor producing 105 BHP of power and 247 Nm of torque matched to a 5-speed manual gearbox. The capable SUV is offered in 4WD avatar and now also sports a mechanical locking differential.

Fire it up & the Thar shouts out loud & clear that there is an oil burner under the hood. No improvements have been made to the NVH levels & if existing owners feel some difference in the new models, it could be that the new dashboard is actually filtering out some engine noise.

Slot in first & the Thar has ample torque to get rolling without 0 throttle input. The engine is very tractable and one can simply release the clutch to keep progressing in city traffic. Peak torque kicks in under 2,000 RPM and turbo lag is nearly non-existent. This is no mile muncher, but the Thar will have enough grunt on the highways. Achieving triple digit speeds will not be a problem, but then the vehicle is not built for this. 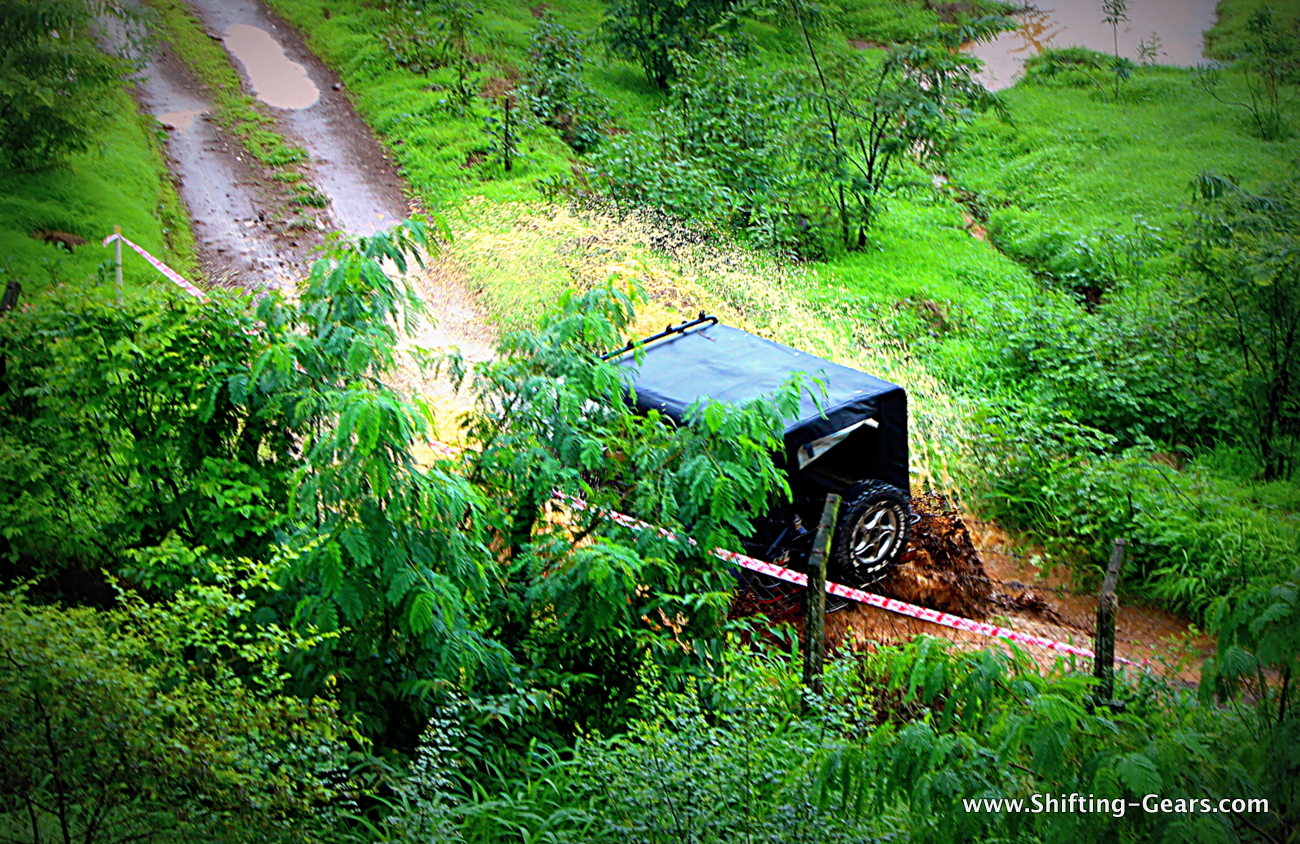 Where the Thar really shines is on broken roads & where the roads nearly do not exist. The 4×4 transfer case from Borgwarner with high & low ratios is what gives character to the Thar. Slip the ratio to 4-low & all you have to do is direct the steering – release all the pedals and the Thar will tackle almost every obstacle thrown at it with ease. With power sent to all four wheels, progress is guaranteed unless you really dump the wheels in some not-so-grippy slush.

The Eaton sourced rear locking differential does come into play during hardcore articulation situation. This unit though manages only the rear wheels & transfers all power only to the wheel which is getting traction. It takes away power from the wheel which is spinning faster (RPM accounted) & transfers all of it to the one which is grounded. While off-roading though, the engine noise gets in the cabin a bit too much for our taste. And with AC on, expect a bit of more music. 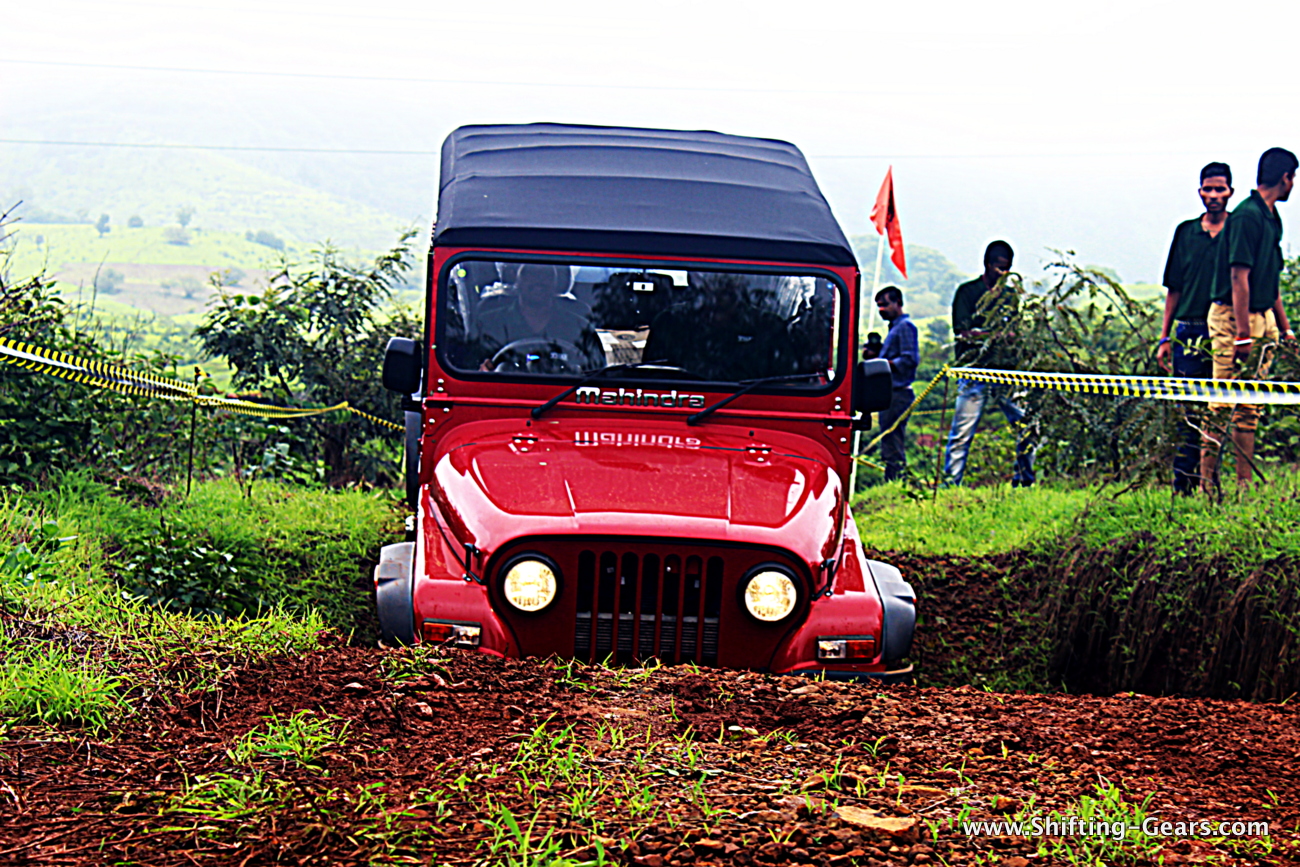 Gearbox is average & does feel economy grade to operate. Gear gates are not really well defined & shifting feels a bit rubbery. Also, the pedals are placed a bit upright & feels like driving a commercial vehicle.

Power steering is offered as standard on the Thar.

Suspension setup on the Thar includes an independent torsion & stabiliser bar at the front and a semi-elliptical leaf spring with shock absorbers at the back. Ride quality with one occupant is rather stiff but eases up as the number of passengers increases. The Thar comes with a healthy 200mm ground clearance & 27 degree departure angle and 44 degree approach angle. You don’t need to think twice before attacking steep inclines (obstacles).

Braking performance comes from disc brakes at the front & rear drum brakes. For the purpose the Thar is built for, we felt this stock setup was adequate.

For a Rs. 9 lakh vehicle though, there’s no safety feature in the That at all. Not even ABS. 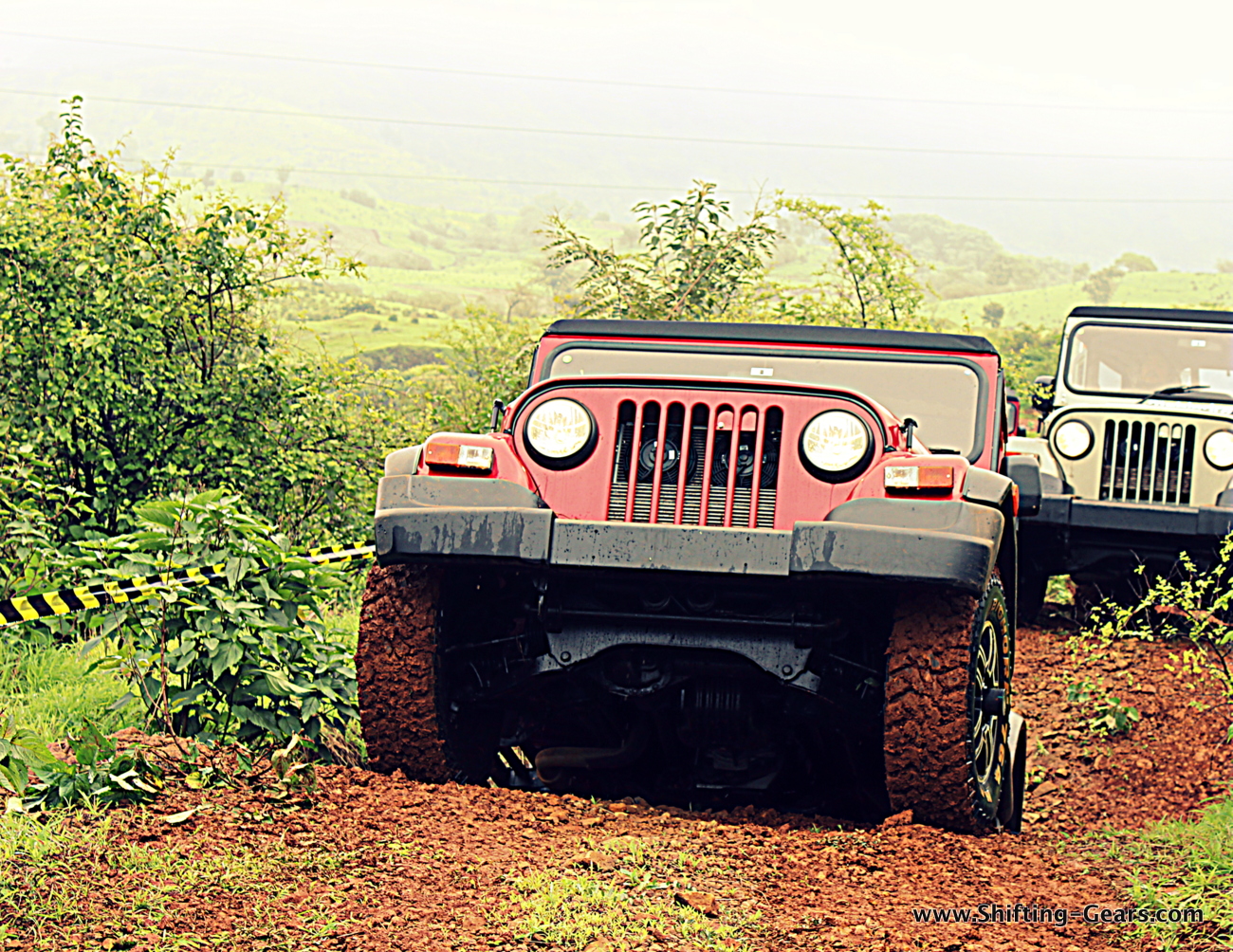 Should you buy one? Well, if off-roading is what excites you, the Thar is the best bet. It is the cheapest REAL off-roader & continues to retain the abilities to be easily fixed by almost any mechanic. To add more to your ownership experience, Mahindra even organises off-roading events for you to play around with your toy. The only negative is that every time you sit to justify the price tag, there will be no other positive except for the off-roading capabilities. But trust us when we say this, buy a Thar, and it has the potential to last longer than you would.