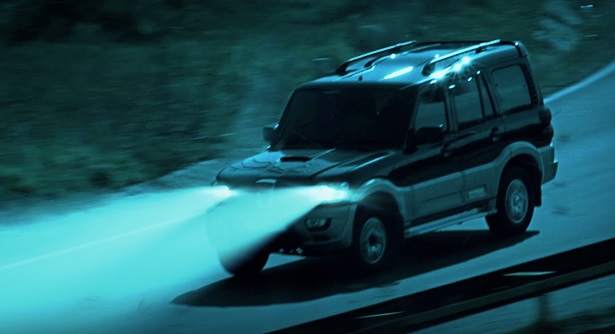 Mahindra is expected to launch the Scorpio facelift around October this year. The home grown utility vehicle manufacturer has been testing the SUV rigorously and will soon launch it in the Indian marketplace.

The Scorpio was launched in 2002, and the upcoming facelift will offer exterior, interior and some mechanical changes. The SUV gets a lighter shade dual tone interiors with beige and grey colours. The dashboard seems to be heavily revised to look much more with the current times. Steering wheel resembles to the unit found on the XUV5OO with steering mounted audio controls. Instrument cluster has been redesigned too and gets a blue backlight now. It also has a MID placed between the speedometer and the tachometer. Information such as TPMS and differential lock is also displayed in the instrument cluster, along with the gear chosen shown in the MID. ORVM electric adjustment knob is found to the RHS of the steering wheel, below the AC vent. Next to that, you have the button to release the fuel lid and the headlamp level adjustment.

Gear stalk still looks the same crude and tall unit, with a beige gear knob. AC vents get chrome / silver finish. Centre console gets piano black finish. A driver armrest in beige is also to be seen in the images. Power window switches seem to have been moved to the door pads for better ergonomics. Rear passengers also get an AC vent, and a charging point below.

Apart from this, going with the current trend, expect the facelift to come with LEDs at the front and back. It also gets revamped headlamp, fog lamp and bumper areas along with a new design for the alloy wheels. The Scorpio facelift is expected to use the same 120 BHP, 2.2-litre mHawk and the 75 BHP, 2.5-litre m2DiCR engines mated to a five-speed manual gearbox.