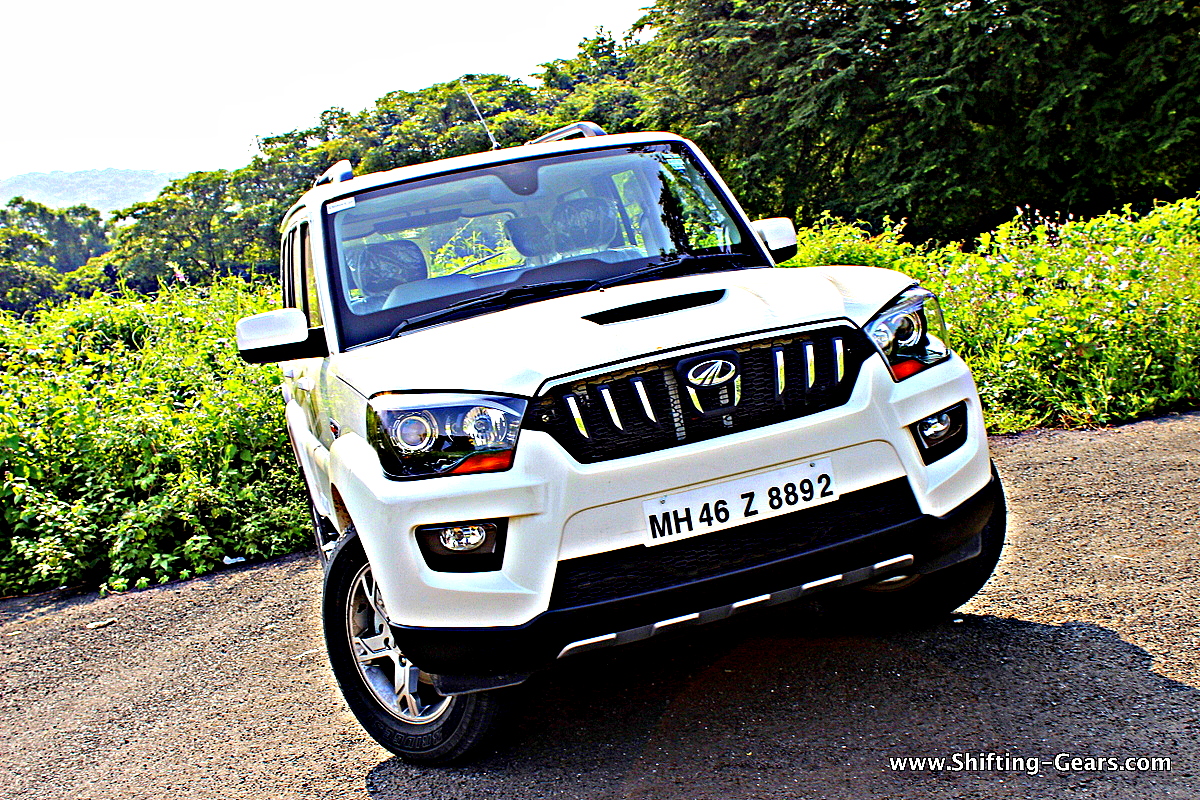 Mahindra had first launched the Scorpio SUV in 2002. Prior to that, in the mid 1990s, the company used to manufacture Willis Jeeps and other modified versions and some more utilitarian products. The company planned to enter the SUV segment in 1996 and finally delivered the Scorpio to the Indian market in 2002. The second generation Scorpio was revealed at the 2006 Auto Expo which was given a facelift in a couple of years and was being sold till date. In the past 12 years of the product life cycle, Mahindra has sold over 4.5 lakh Scorpio SUVs and has maintained an average sale of 50,000 units over the past three years; which is commendable considering the primary competitor – the Tata Safari sales are currently flagging. 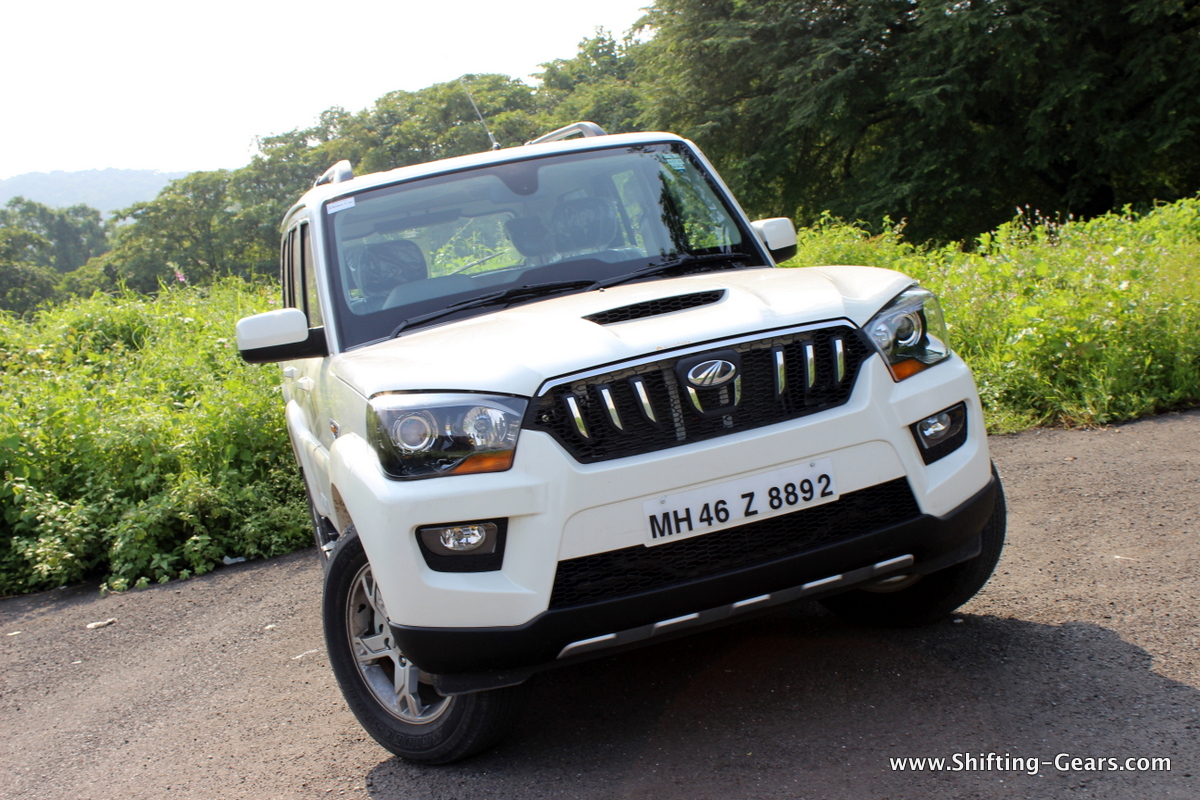 The Scorpio was first launched in 2002, and although the design is subjective, we are glad that things have changed noticeably

Over the years, Mahindra kept experimenting with the Scorpio and launched multiple variants. The SUV got a Getaway pick-up version, Micro-Hybrid technology, mHawk diesel engine and much more. With the new generation Scorpio which was launched yesterday, Mahindra claims that 29% of the cost comprises of electricals. With the numerous spyshots of the test mules being spotted and finally, last weeks scooped images, there were mixed reviews about how the Scorpio looks. But hey, good or bad, it was time for a change. Where most people who love clean and understated designs will find the new Scorpio too cheesy, there is a solid demand for products designed this way too. Don’t forget, a major part of Mahindra’s sales comes from the Tier-II, Tier-III and rural regions; where an extra bit of flare works wonders. 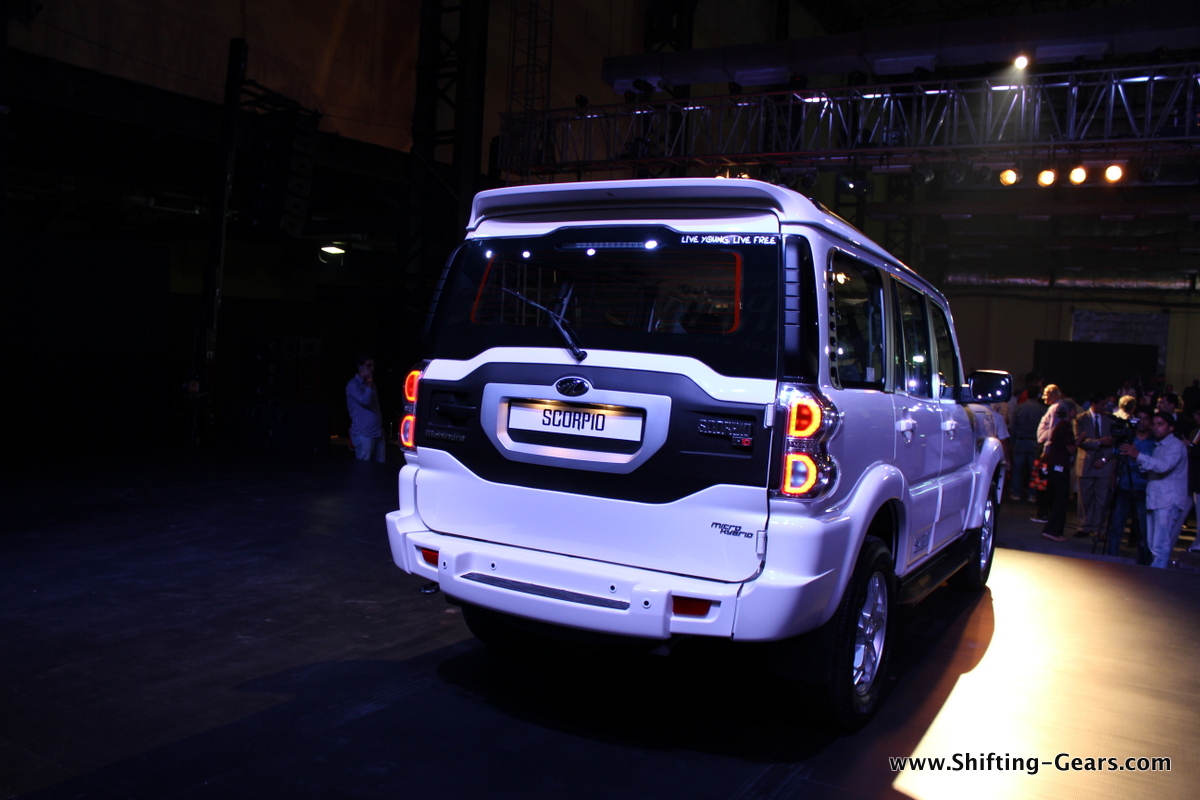 Since the festive season sentiment suggests us Indians to book a car on auspicious days, and the Scorpio launching during Navratri, we thought of taking the SUV for a short spin and compiling a few points which can help you make or break the deal. So what does the new Scorpio have to offer us? Let’s find out…

Exteriors:
The front and rear end of the car has been extensively revised, however the side profile remains almost identical to the outgoing model. At the front, you get a dual projector headlamp setup which is smoked out and has a LED DRL eyebrow. Headlamps have static bending technology which help in better illumination of the road when you turn the car. A new front grille with honeycomb mesh and chrome inserts with a chrome strip on top. Air-intake via a bonnet scoop which adds to the muscular design language and a silver painted front skid plate. Bumper design has been revised and the fog lamps are recessed with black housing. Front bonnet now drops a little lower than it used to on the previous generation. Windscreen rake angle appears to be unchanged. 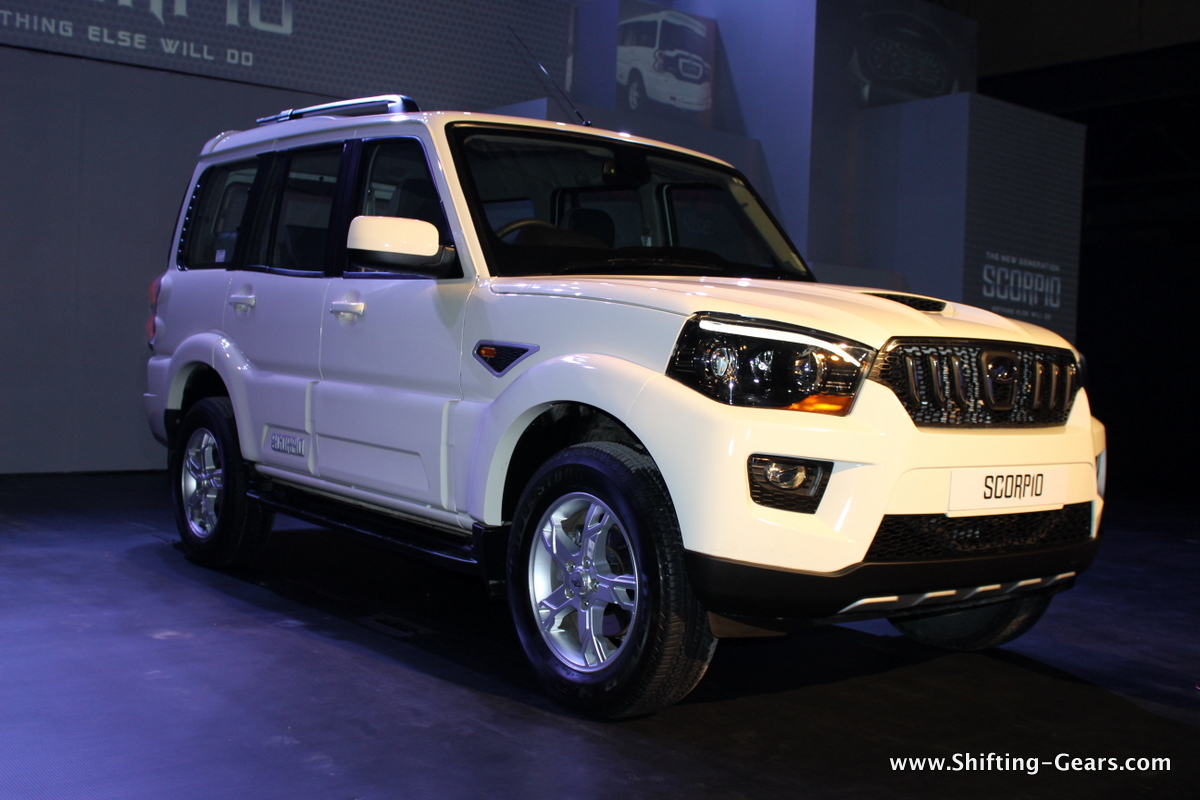 From the side, the Scorpio sees little changes. Body shell remains the same but gets tweaked body mouldings on the side and a Scorpio badge on the rear door. Blackened B, C and D pillars look good and Mahindra also provides roof rails in black which adds to the bold look. You get 17″, 5-spoke alloy wheels which are more form over function and look decent. A full size side step in black and a fender ornament with turn indicators and engine badge on the LHS wrap up the side profile.

At the back, there is a lot of clutter. A good thing which Mahindra dropped is the useless reflector strip which used to run all the way up to the roof from above the tail lamp. This has been replaced by a black plastic piece which can be used as a grab spot while jumping in the third row seat. Rear bumper gets 4 reverse parking sensors and a single step to aid ingress. On the rear door, you have a black and silver applique which will either attract or repel a prospective customer. It has a silver surround for the number plate recess and a black applique around it. This black section is a dust magnet and keeping it clean will be a pain. Plenty of badging at the back which includes the Scorpio badge, variant name, company name, 4WD sticker and a Micro Hybrid tag as well. Last, the Scorpio gets new LED tail lamps in a chrome unit. Scorpio is etched even in the tail lamp which we think was unnecessary. Also, the blue lens for the reverse lamp is rather weird to look at. You also get a chunky spoiler on higher variants and a cheesy ‘Live Young Live Free’ decal below.

Exterior paint quality is good, but not excellent. There were a few inconsistent spots on the body mouldings. Shut lines and panel gaps are pretty utilitarian as well.

Interiors:
Step inside the new Scorpio and you will instantly notice the new and much modern looking dashboard compared to the outgoing model. Ditching the round and curved design, the new dashboard is rather flat. It gets a dual tone, grey and black colour scheme and looks much with the times. Top section of the dashboard and the centre console are seen in black, while the rest of it is grey. You get silver accents running across the dashboard and a cheesy chrome Scorpio badge under the leftmost AC vent. AC vents get chrome surround and directing the wind on your face is an easy task. Steering wheel is a straight copy-paste job from the XUV5OO, but does not get a leather wrap. It hosts the cruise control and audio control buttons and the horn pad is easy to operate as well. Blue backlit instrument cluster has two dials for the speedometer and tachometer and a MID in between. MID displays the fuel and temperature in digital bars, gear selected, DTE, average fuel consumption, odometer, trip meter and service reminder. The 6″, colour display, touch screen infotainment system has DVD, CD, USB, Aux, Bluetooth and GPS compatibility. Touch feedback is a 7/10 and the screen reflects under the bright sun. Sound quality is average and if you like crystal clear music experience, speaker upgrades is a must. AC controls are from the premium parts bin and touch and feel is above average. Also, on a hot sunny day, the AC kept us cool. Another good change is the gear stalk. It is relatively short and does not perform any bold dance moves when on the move. Yes, there is a lot of lateral movement, but it is lesser than it was previously. Gear knob falls in your hand nicely and is more car like than the bulky typical UV unit. 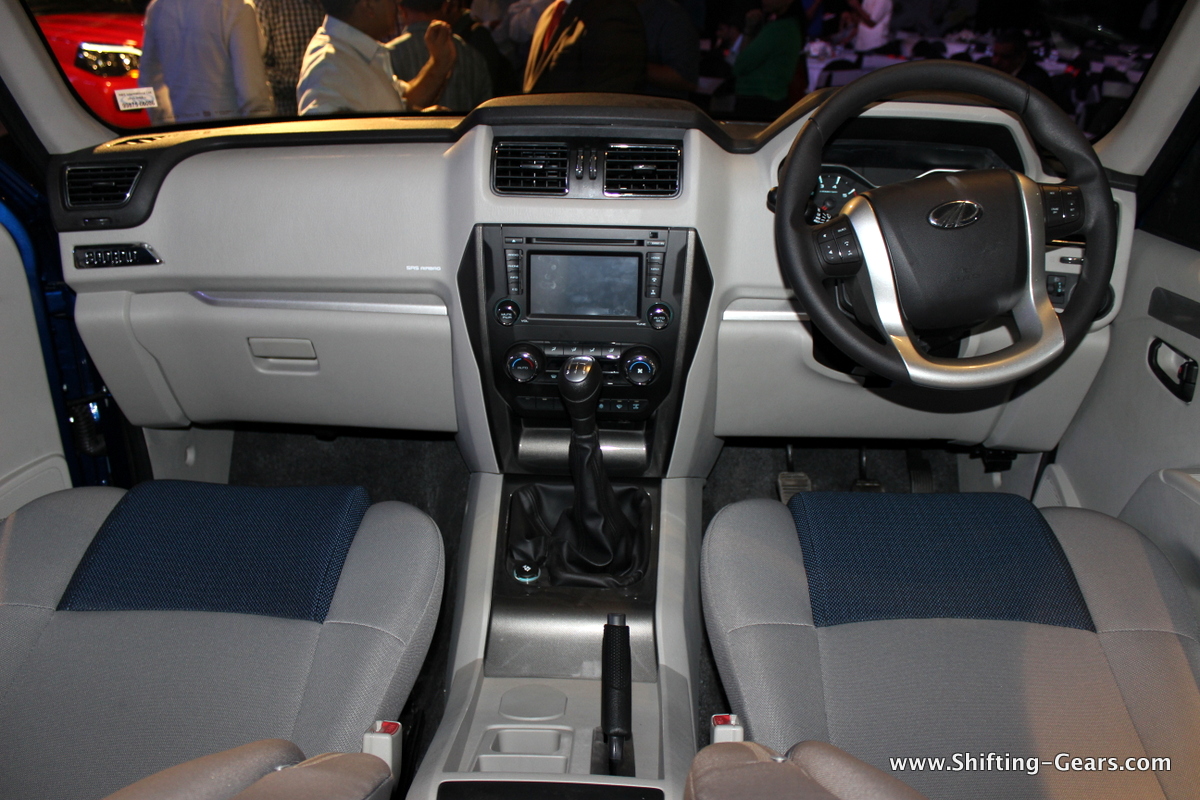 All new dashboard, looks fantastic compared to the outgoing model

Seats are on the soft compound side and we would have liked it if they were a little firmer to aid better comfort on long drives. The driver seat is accommodating and even those on the heavier side won’t have an issue here. Seat height adjustment and the front and back range provides a good driving position to shorter and taller drivers. The bonnet is clearly visible to provide better judgement in crawling traffic. Driver armrest falls all the way down to touch the seat-base and does not lock half way where we would have liked it. Driver doesn’t even get a dead pedal, but we assume, Mahindra will add this once they come out with the automatic variant (which is months away as of now). 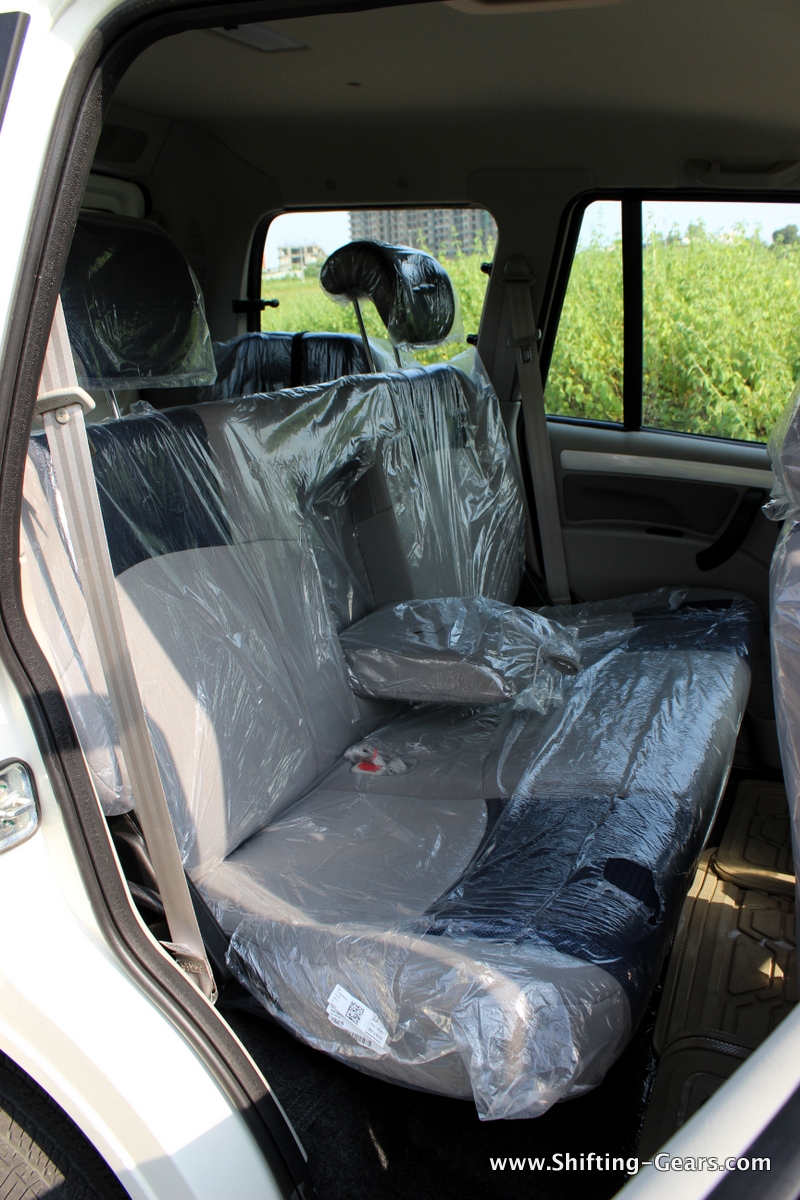 Getting in the second row seat is quite a climb, as is the case with all ladder on frame SUVs. Once seated, you will notice that the seat back angle is rather upright. Legroom is enough for passengers of 5’8″ of height, however, a reclined seat would have made it more comfortable for taller occupants. There is one thing you notice instantly when you get in the Scorpio, the quality of seat fabric is very poor. Touch and feel is at par with budget hatchback and it just does not do justice to the price Mahindra is asking for the Scorpio. There is no floor hump, so having three in the 2nd row seat will be easy. AC vent is provided between the front seats and a small storage spot below that. However, we think a roof mounted AC vent would be more effective and also, considerate for the third row passengers. 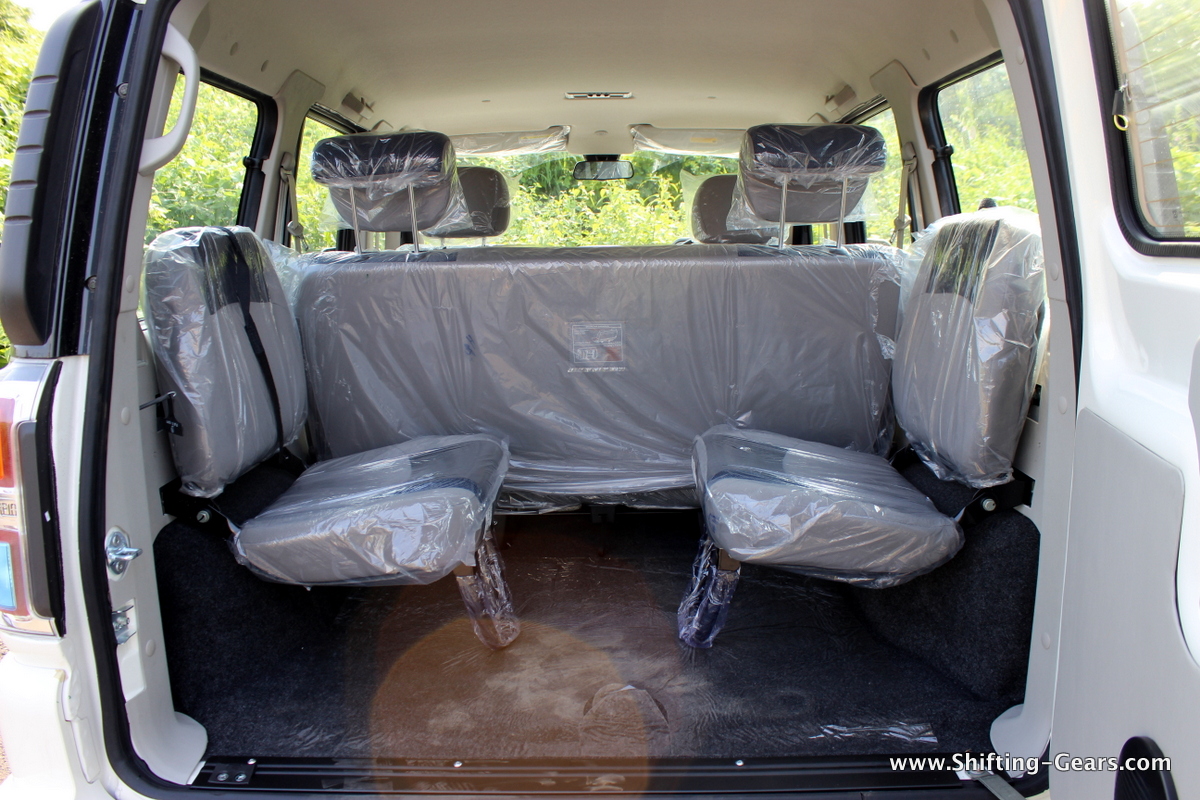 Third row is sideways facing. Not many would want to be in this position when traveling long distances. Headroom is in limited quantity for taller passengers and if you plan to carry luggage, leg room is gone for a toss too. Getting in and out of here is quite a task again and is a big NO for the elderly. 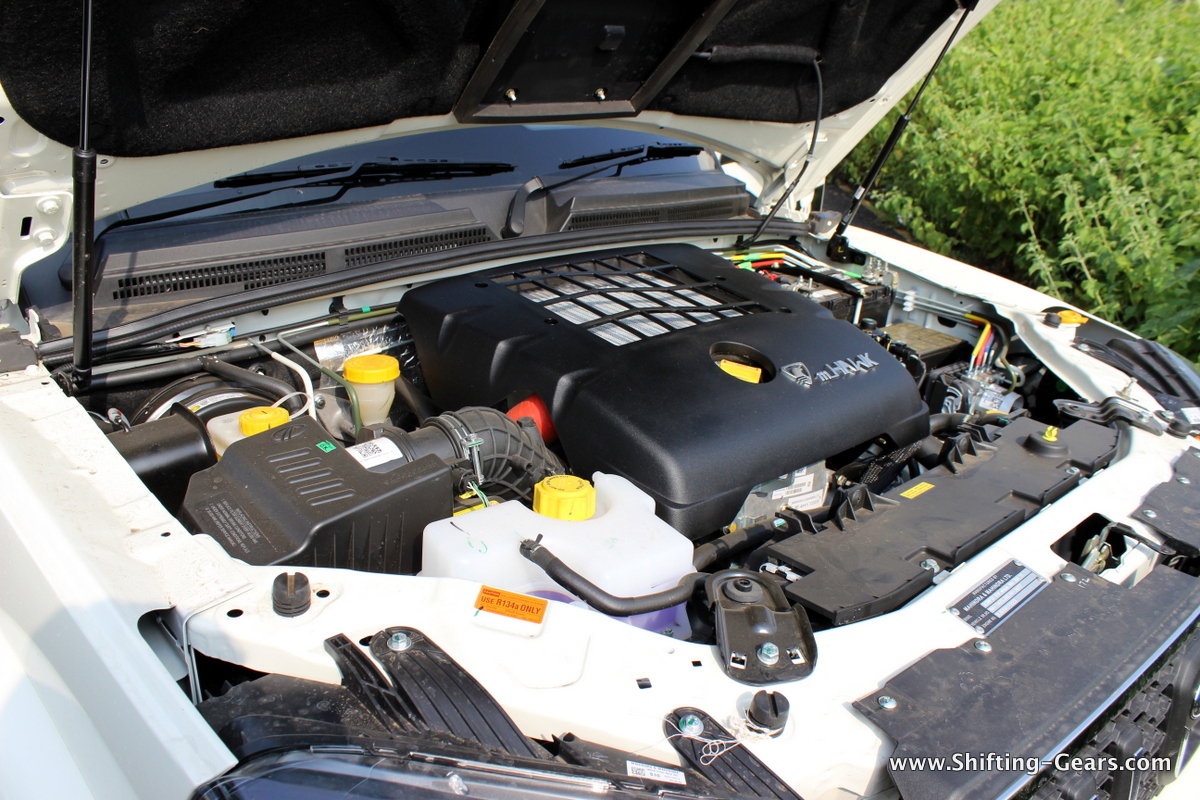 Mahindra has made a lot of changes under the skin as well and this is not just a facelift. Changes include a new clutch with better NVH, shift-on-fly, new front and rear suspension, improved ABS, new chassis, better in-cabin vibration insulation, light weight banjo axle and front and rear anti-roll bar. The Chassis now has increased stiffness and meets European crash safety norms as well. With the known negative of the previous Scorpio being the soft suspension, Mahindra has reworked the setup to control body roll and increase stability. Turning radius has also been reduced from 5.7m to 5.4m which is more car like now.

Fire up the engine and the shake seems lower than it used to be previously. Even the gear stalk’s lateral movement is significantly lower indicating Mahindra has definitely worked on the NVH levels. The diesel motor is fairly audible inside the cabin, as is the case with most of the SUVs. Slot it in first gear and you notice that the gear gates are not perfectly defined, but are better than before. Gear throw has been reduced as well. Clutch requires moderate level of effort and bumper to bumper traffic conditions can be a little uncomfortable. Press the accelerator and the Scorpio does have a fair amount of suspension play. Every time you shift a gear, the vertical movement from the front end is noticeable. Driving around corners, the chassis is much stiffer and although the suspension bobs around during gearshifts, the body roll is well controlled mid-corner. Steering weight is adequate, but feedback is minimum even though it is a hydraulic unit. At speeds up to 80 kmph, on undulated surfaces, the Scorpio now feels more planted than before and the occupants are relatively more comfortable. As is the case with most diesel engines, the power delivery on the Scorpio begins to taper beyond 3,500 RPM suggesting an upshift. 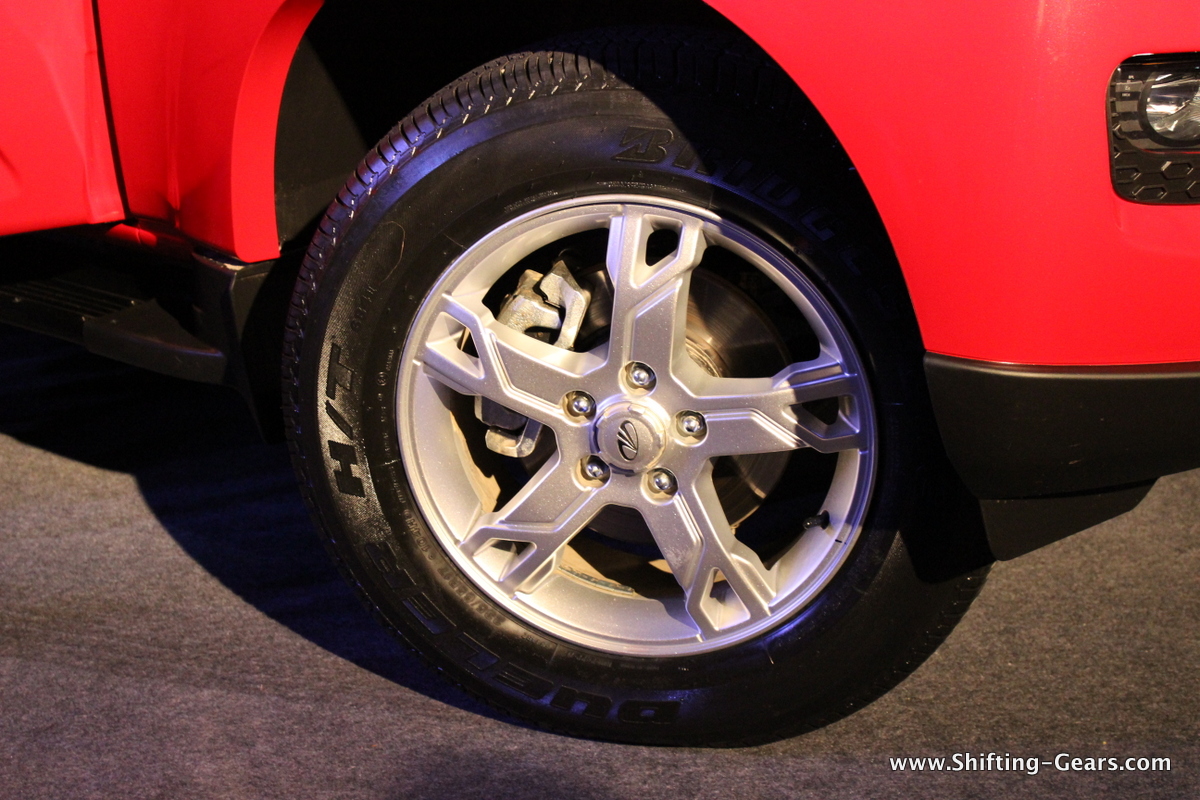 Braking performance is weak. The brake pedal has a long travel and the brake bite feels very spongy. Also, there is a noticeable amount of nose dive when you hit the brakes hard. It will take some time getting used to how much pressure you need to apply on the brake pedal to stop the car at the desired spot.

So if we have to sum up the the Scorpio from the driving dynamics point of view, it is worlds apart from it’s predecessor. The ride is stiffer, more plaint at high speeds and almost better in every aspect. Don’t get us wrong though, the Scorpio is no corner carver; but is a significant improvement.

So if you’re in the market for a new SUV this side of 15 lakh, the Scorpio is a worthy contender. With other options which include the flagging Tata Safari Storme, Renault Duster and Nissan Terrano; the Scorpio has much more room to offer with a host of features as well which the competition does not have. Yes, looks are subjective, but the Scorpio will stand out among competition considering the LEDs at the front and back and rather boxy and tall body style. In the coming months, we will put up an even more extensive review of the Scorpio and put it through it’s paces with the 4WD tech as well.

Click here to check out the Mahindra Scorpio photo gallery.