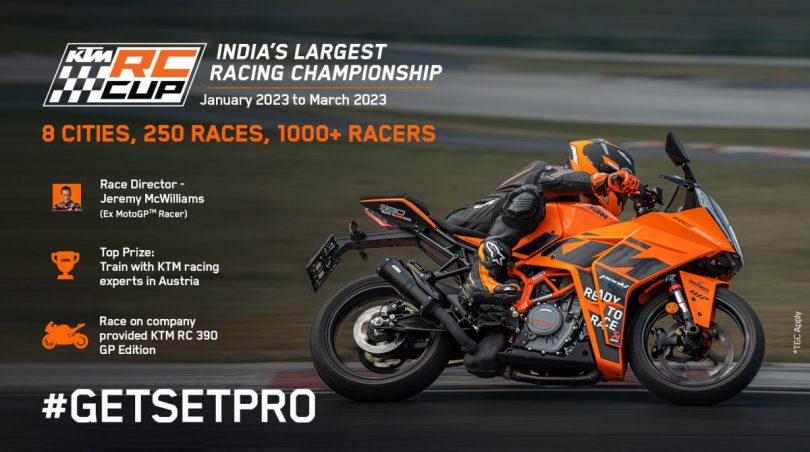 The KTM RC Cup has begun in India. The event will be spread across 3 sections – Selections, Qualifiers and the Finale. Enthusiasts pan-India will be able to part of the this event that is a part of the KTM Pro-XP. This offers KTM owners to taka part of experiences that will make them pro riders.

Location and schedule of the KTM RC Cup

The first round, that is the Selections, will be taking place in eight cities – Mumbai, Vadodara, Delhi, Ranchi, Hyderabad, Bangalore, Coimbatore and Chennai. The racing championship has received a good response and the race organisers are expecting over 1000 riders to participate in this event.

The first lot of the selection took place in Mumbai at the Raymond’s ground, Thane. Here 130 racers rode the KTM RC 390 GP to set a lap time. The top 10 riders were selected on the basis of their lap times. The races moving ahead to the Qualifier rounds are Kayan Zubin Patel, Rajesh Swami, Mihri Sakpal, Roshan Gawad, Rushabh Gala, Jatin Porabia, Neeraj Ballurgi, Devilal Punjaram Lunja, Divy Parmar and Dhiraj Baikar. The Mumbai event concluded with a thrilling race under the floodlights on the 14th of January 2023. In this race Kayan Zubin Patel won while Rajesh Swami came second and Vignesh Karangutkar was placed in the third position.

The Qualifiers will be held in Chennai where the top 10 from each of the 8 cities will participate.

The Finale too will be concluded at Chennai where the top riders from the qualifiers will race it out to become the winner of the KTM RC Cup.

Prizes for the winners of the KTM RC Cup

The Top 3 will be awarded a visit to the global headquarters of KTM in Austria and will be able to train  with the Race Director in Austria, interact with KTM Factory Racing athletes, watch a MotoGP race live at the Red Bull ring and visit the prestigious KTM Motohall.