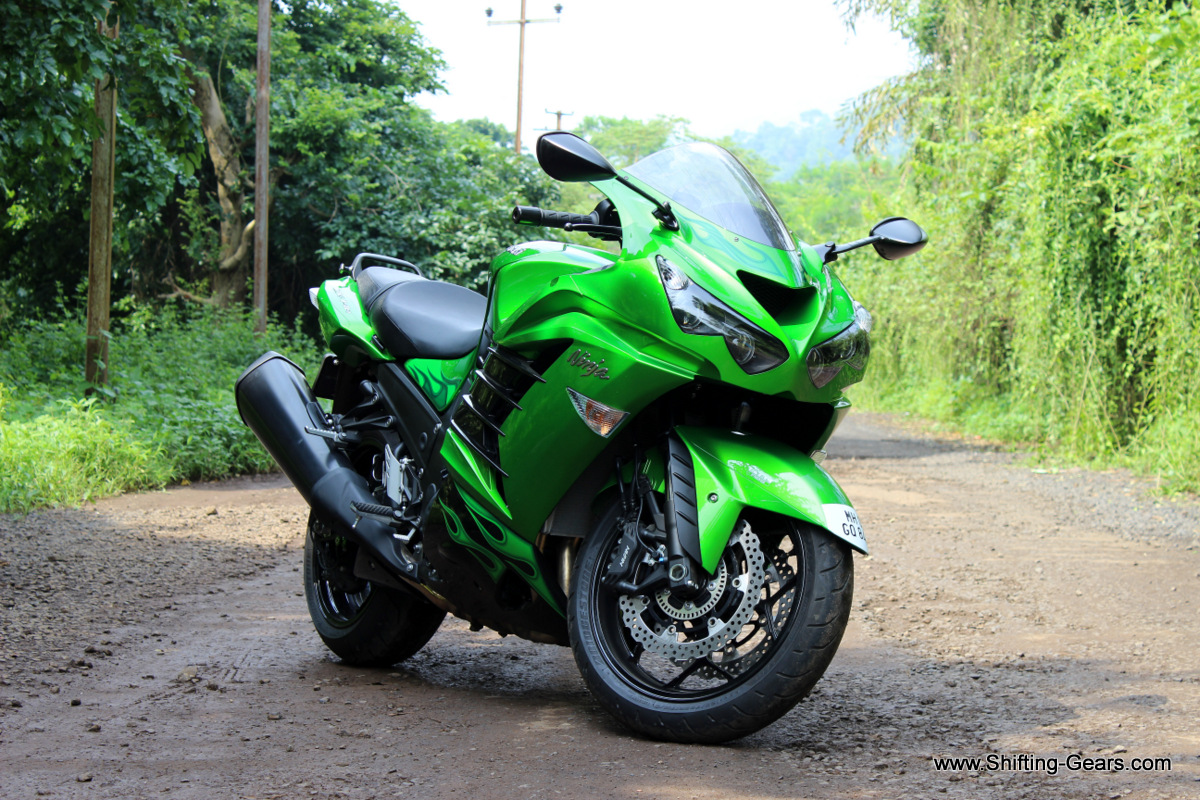 The Kawasaki ZX-14R, or the ZZR1400 for the European market was the brands most powerful superbike when launched. It was first introduced at the 2005 Tokyo Motor Show and was launched as a 2006 model year motorcycle.  It replaced the ZX-12R and Kawasaki claims that the ZX-14R is the fastest accelerating production bike. The primary objective of this Kwacker was to directly challenge the Suzuki Hayabusa. Labelled as the ‘gentleman’s agreement’, the Japanese motorcycle manufacturers and their European counterparts as well as rivals made this agreement to keep a tab on the ever increasing top speed limit. However, the fight between the Hayabusa and the ZX-14R continued, and is probably game till date, now that the Kawasaki holds the fastest production bike title. But how important is it to ride a bike with this title? What does it feel like? Is it worth it? Let’s find out… 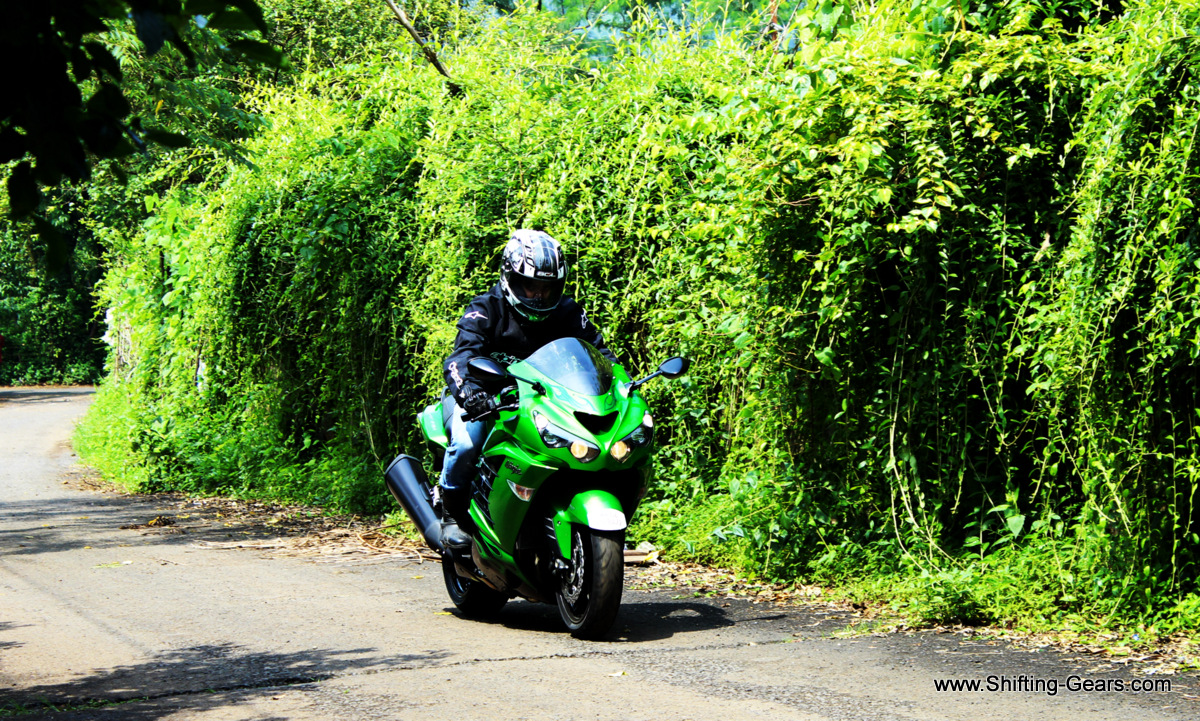 Styling:
Big displacement, big horsepower, big titles; but does it look the part? YES! One glance at this green motorcycle and there’s just one thing that comes to your mind – it’s huge. Look at it from any side; front, side or rear; the dimensions are massive. It is evident from the design that the bike was designed to achieve the top speed title. At the front, the quadruple projector headlamp setup is the star feature (second to the engine of course). The bike is already wide, and this elongated headlamp setup adds to it. On low beam, the projectors at the centre are functional, while high beam turns on the middle one. It has a white pilot lamp on either side. Between the headlamps, you have a V shaped air duct. If you ever happen to see the bike in your rear view mirror, I’m sure you’ll slow down to have a better view from the side as well. Road presence is just outstanding. Above the air duct, you have a bubble shaped wind deflector, which works like a charm when on higher speeds and crouching. ORVMs have long stalks. Once you set them in place, the viewing angle can be adjusted separately by twisting the mirror section. 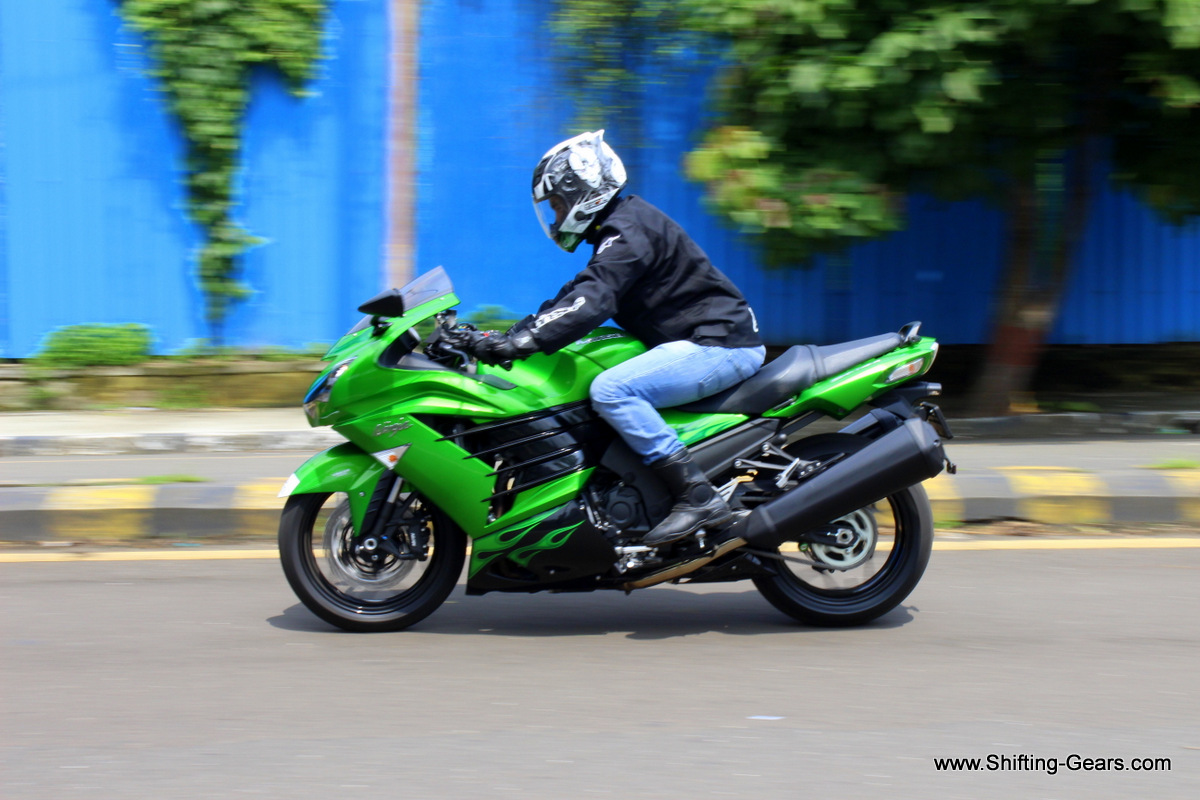 From the side, the bike looks very front heavy. The fairing is rather long when compared to other sports bikes. Viewing head on from the side, you will notice that the fuel tank and the pillion seat end at the same height. Pillion seat is more; well, accessible by not being too high. Although the front end looks bulky, the XL sized exhaust pipes on either side add that much more to the visual weight at the back. They are simply huge and are painted in black, no silver tip or any other fancy stuff. Turn indicators are integrated in the body panels, both at the front and back. Another styling highlight on the sides is the thematic quadruple fins on the fairing. On the 2013 model, this section was body coloured. However, the 2014 model gets it painted in black, to break the monotony. Seats are long, and of the step-up category, but not split. Not having split seats might satisfy those on the heavier side a wee bit more. 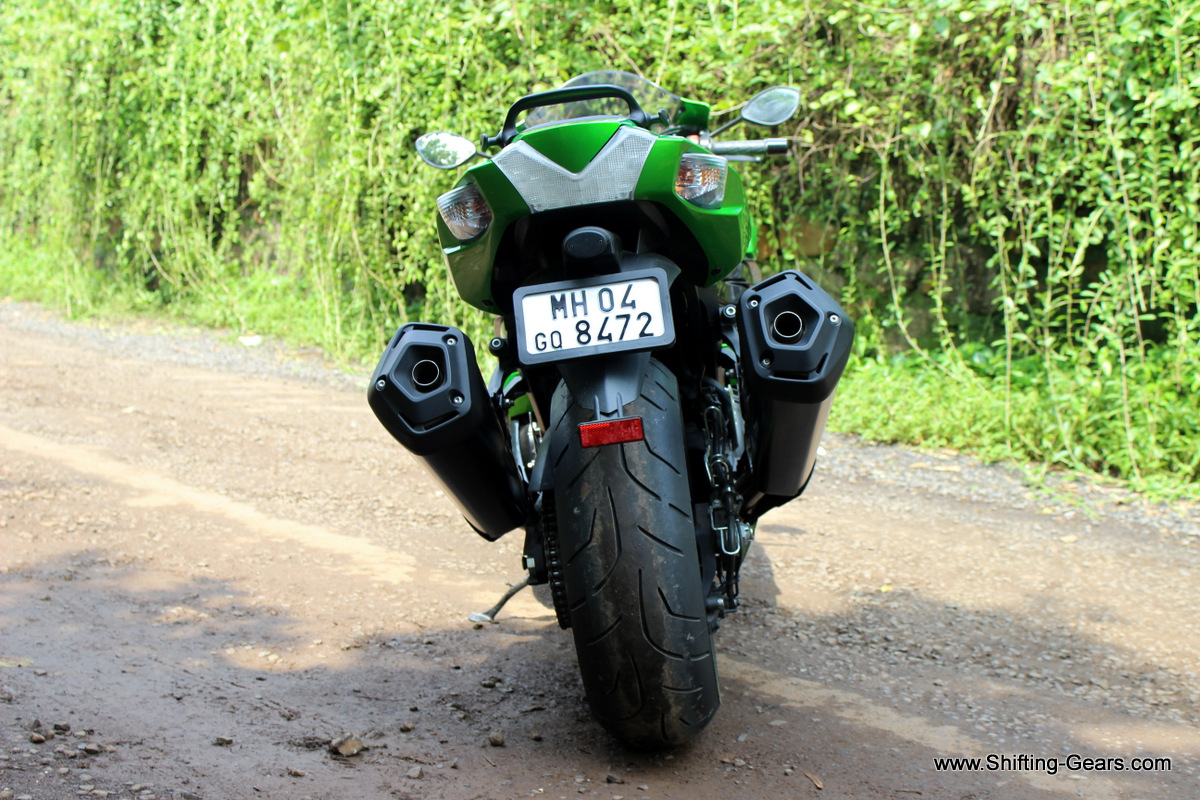 At the back, you get V shaped LED tail lamps. Honestly, we’ve seen better rear ends. This one looked pretty ordinary. Also, the white plastic lens cover on the tail lamp was far from looking premium. Turn indicators of the clear lens category sit right next to the tail lamp, integrated on the body panel. Dual exhausts with the all-black end can add to the visual width at the back. A grippy 190 section rear tyre is exposed quite well with the short tail fender housing the number plate.

Ergonomics:
Amongst motorcycle enthusiasts, the ZX-14R is not popular only because of the brawniness of its engine, but the ability to roam around the city, highway and country roads with two up. The rider is happy at all times, be it on a drag strip, or a relaxed breakfast ride. Riding position has a perfect balance between sporty yet comfortable. Reaching the clip-on handle bars sees quite some travel from the rider seat, but they aren’t placed too low, and neither is the rider seat high up. However, shorter riders will need to struggle a bit here. Also, the taller you are, the bike would suit you better. It is just too big to look proportionate on a rider under 5’8” of height. Seat is long, soft and very accommodating. And unlike other superbikes, the ZX-14R keeps the pillion happy too with the ample seat room. Control switches, brakes and gear levers are easily accessible by the rider. ORVMs have long stalks, resulting in almost negligible obstruction from your hands in the mirror. For the pillion, getting on and off the bike is easy, thanks to the relatively low pillion seat height. Also, full size grab rails are a good thing to have here. They get two hooks for carrying convenience as well. Clutch and front brake lever can be adjusted to suit your preferred position. 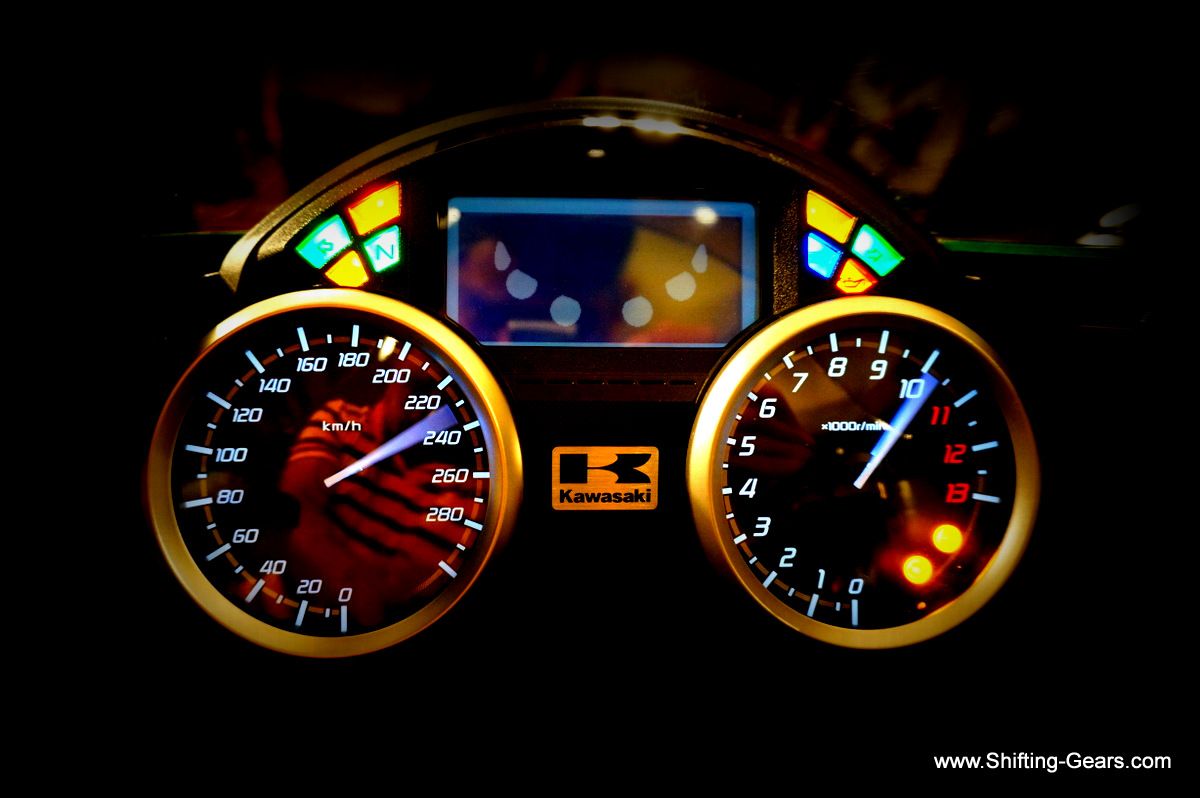 When you turn the ignition on, the instrument cluster performs a test run

Instrumentation and technology:
Instrument cluster has two big analogue dials for the speedometer (left) and tachometer (right) with a Kawasaki logo in the centre. Above these two dials, in the centre sits a MID. MID displays external air temperature, DTE, fuel gauge, gear position indicator, odometer, clock and dual trip meters. It also helps you switch between the 3 traction modes and power modes. Controls are easy to understand and the bike responds to the changes quickly. Around the MID, you have a couple of tell-tale lights. 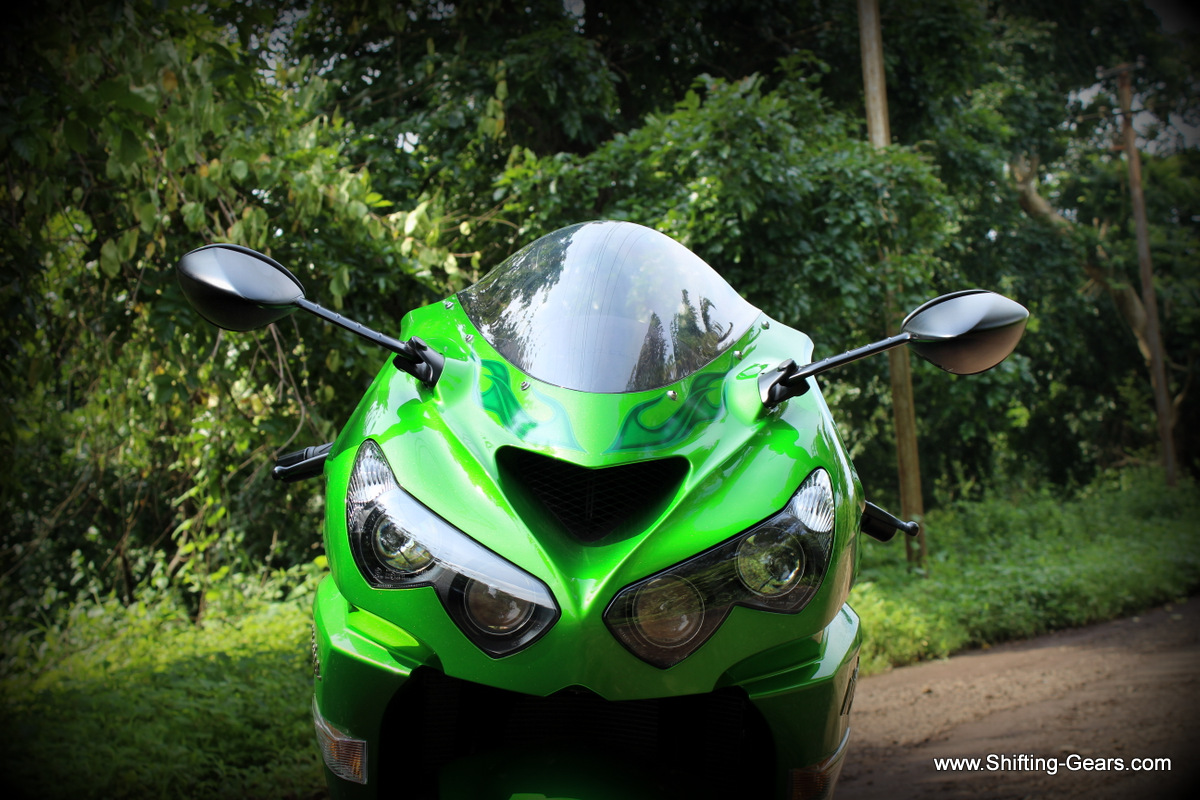 Engine performance and handling:
Powering the ZX-14R, you have a liquid-cooled, 4-stroke, in-line four, 1,441cc, DOHC, 16 valve engine with fuel injection. It produces 200 PS of power @ 10,000 RPM and 210 PS of power @ 10,000 RPM with RAM air. Torque figures are at 162.5 Nm @ 7,500 RPM. 4mm longer stroke increases displacement of the powerful in-line four-cylinder engine to 1,441cc. Bore and Stroke are now 84mm x 65mm. Compared to its predecessor, the new engine offers more torque across the revv band, and substantially more power in the mid-high range. Acceleration from 4,000 RPM and up is notably stronger. Adding to this, the aerodynamic performance reduces drag and contributes to wind protection and stability at high speeds.

Fire up the bike and the exhaust note is rather low and smooth. On idle, the bike feels very refined and tamed. However, slot it in first and the story changes. Shifting to the first gear from idle is a noisy affair. Release the clutch and the ample low end torque pulls the bike comfortably, without any throttle input. However, we do not recommend lugging the engine for long. The bike is very tractable and the peak torque kicks in at a low 7,500 RPM. City commute is absolutely no problem, if not for the bulk of the bike. Heat is surely more compared to other (read lower capacity) litre class bikes, but is well controlled and we did not have to keep moving out feet just to ease off. Power delivery is very linear and the bike accelerates without too much drama, or the front wheel lifting up often. At city speeds, the bike might seem very manageable, but wring that throttle and the acceleration is mad. Not that it is unsettling, but the bike gains momentum rather quickly. We recommend attacking those corners cautiously though. At 268 Kg, the bike is super heavy and can throw in some surprises for those new to this machine. Another place where you feel the heavy weight is while backing up the bike. It is heavy, and backing up with a pillion on board will make it even more difficult. 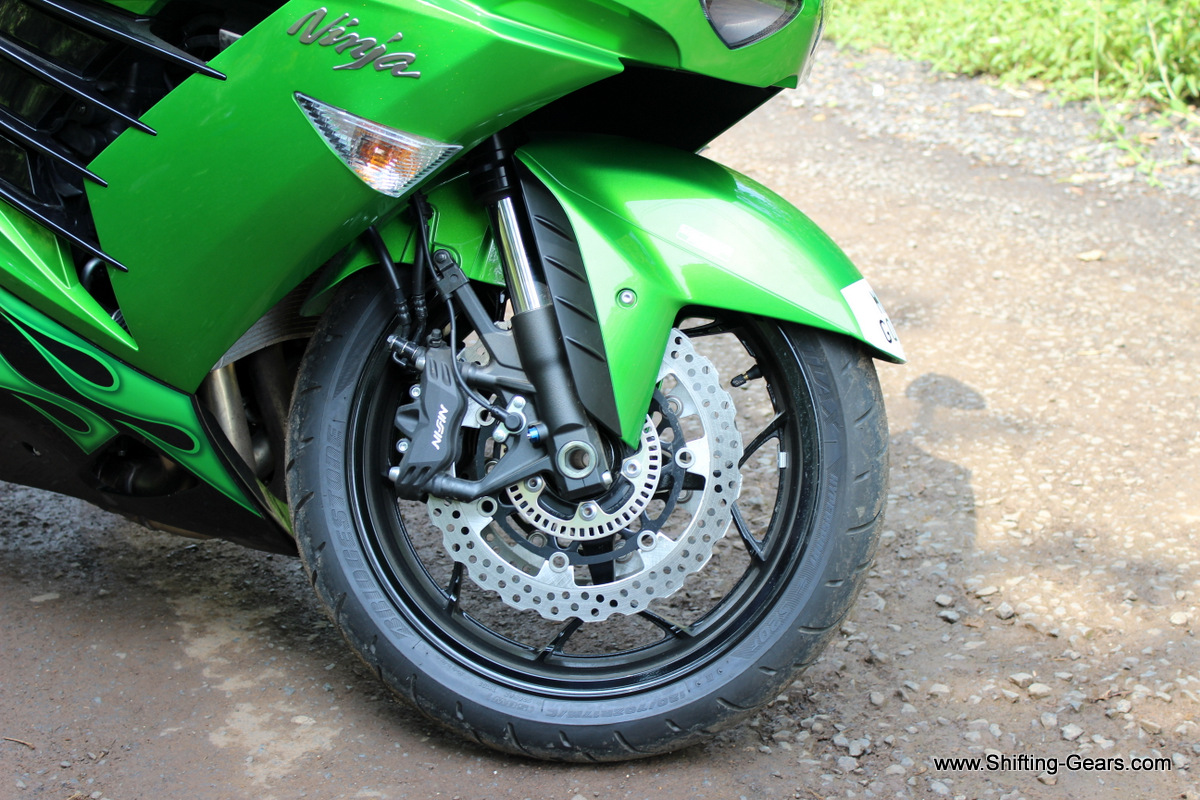 Reiterating, we could commute on city roads at city speeds up to third gear without any hesitation. For enthusiastic figures, the bike can achieve 0-100 kmph in 2.9 seconds and 0-200 kmph in 7.6 seconds. Top speed is electronically limited at 299 kmph.

Kawasaki’s monocoque frame is a hollow composite of aluminium parts. It uses the engine as a fixed member so that chassis rigidity is formed not only by the frame, but the combination of the frame and engine together. Joining the engine and front and rear suspension units, the hollow box-style frame envelops the engine from above. In addition to being made from lightweight materials, its main section also acts as the air cleaner box and battery box, enabling parts to be reduced for even greater weight savings. Further, because the frame does not run beneath or alongside the engine, the chassis can be made very compact. Stiffer springs for both the front fork and rear suspension deliver a firmer, sportier feel. Along with the new springs, damping settings were also revised to suit the significantly greater output. Adding the 268 kg weight of the bike to this, it feels planted at all times. Moving over speed-breakers needs slowing down, a bike with 125mm of ground clearance has high possibility of scraping and leaving you in tears. On bigger potholes, the bike is a little nervous and also allows the jolt to be felt by the rider. Brake bite is acceptable and lets a progressive feel on the levers.

End result is a dominating open-class, supersport motorcycle with brilliant city tractability and the fastest acceleration when need be. Perfect balance between sporty, yet comfortable; and not to forget a happy pillion too. Aftermarket is already overflowing with plenty of accessories for the ZX-14R, so you have a unique one for yourself. As seen on our test bike, the flame decals were an aftermarket purchase. What can be a downer though is the low availability. Kawasaki, even though it has been in the market for over half a decade, has limited number of dealerships (it is working on adding more though). The new born Triumph has a much wider reach in terms of sales and service network in India.

Click here to check out the Kawasaki ZX-14R photo gallery.