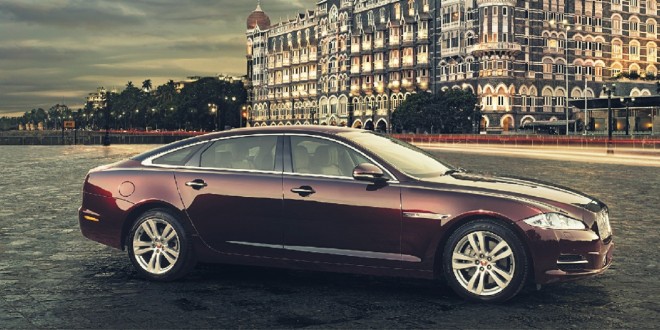 In June 2015, Jaguar announced that its flagship model XJ, has achieved remarkable performance with a growth of 300% in just one year since start of its local manufacturing in India in June 2014. With such a sales figure, reviewing this luxury British sedan was top priority, & Jaguar Land Rover arranged for a test drive in the Mumbai region.

The model we test drove was the XJ 3.0L diesel portfolio variant which costs under Rs. 110 lakh (ex-showroom). 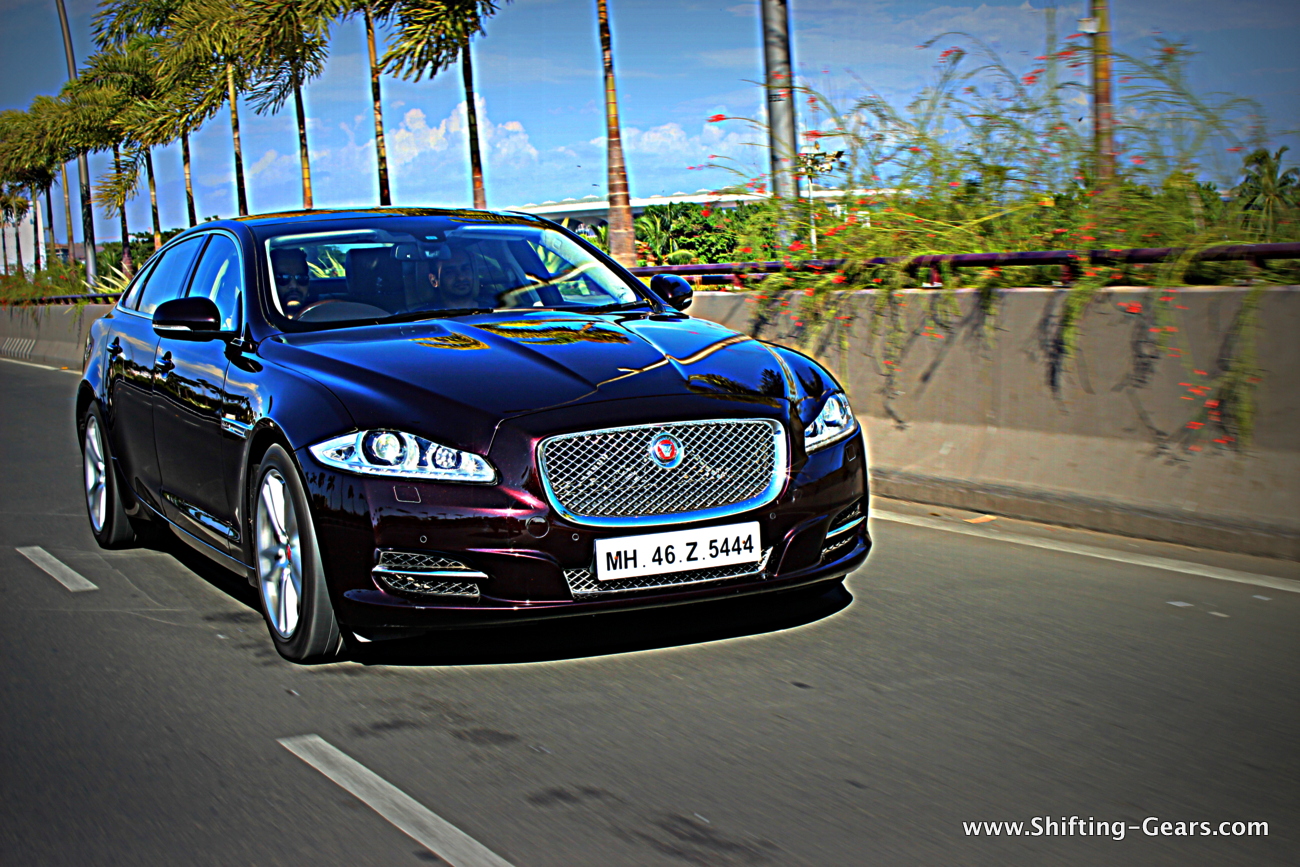 Although you see fewer Jaguar’s on the street compared to the top 3 German rivals, the brand is slowly getting more popular in the luxury segment with sales increasing consistently. With more models being planned for the immediate future, there’s more news about such sales performance expected to be circulated.

The model we have on sale here in India is the X351 model which was first unveiled in 2009. Yes, that long ago. Also, there’s a facelift model which is going to be launched in 2016 which means that the product could have a life cycle of over 8 years at least. The XJ is brought to India via the CKD route and is locally assembled at Pune, Maharashtra.

Exteriors:
One look at the Jaguar XJ & it might not look like something that is straight out of a SciFi movie by 2015 standards. Neither does it really match up to the new & upgraded competition such as the Mercedes-Benz S-Class. But be assured, if you want to buy a flagship luxury sedan and wish to make a statement, the XJ does this job exceptionally well. With fewer cars out on the street, the brand value for the brand is very high and the XJ is quite an eyeball magnet. 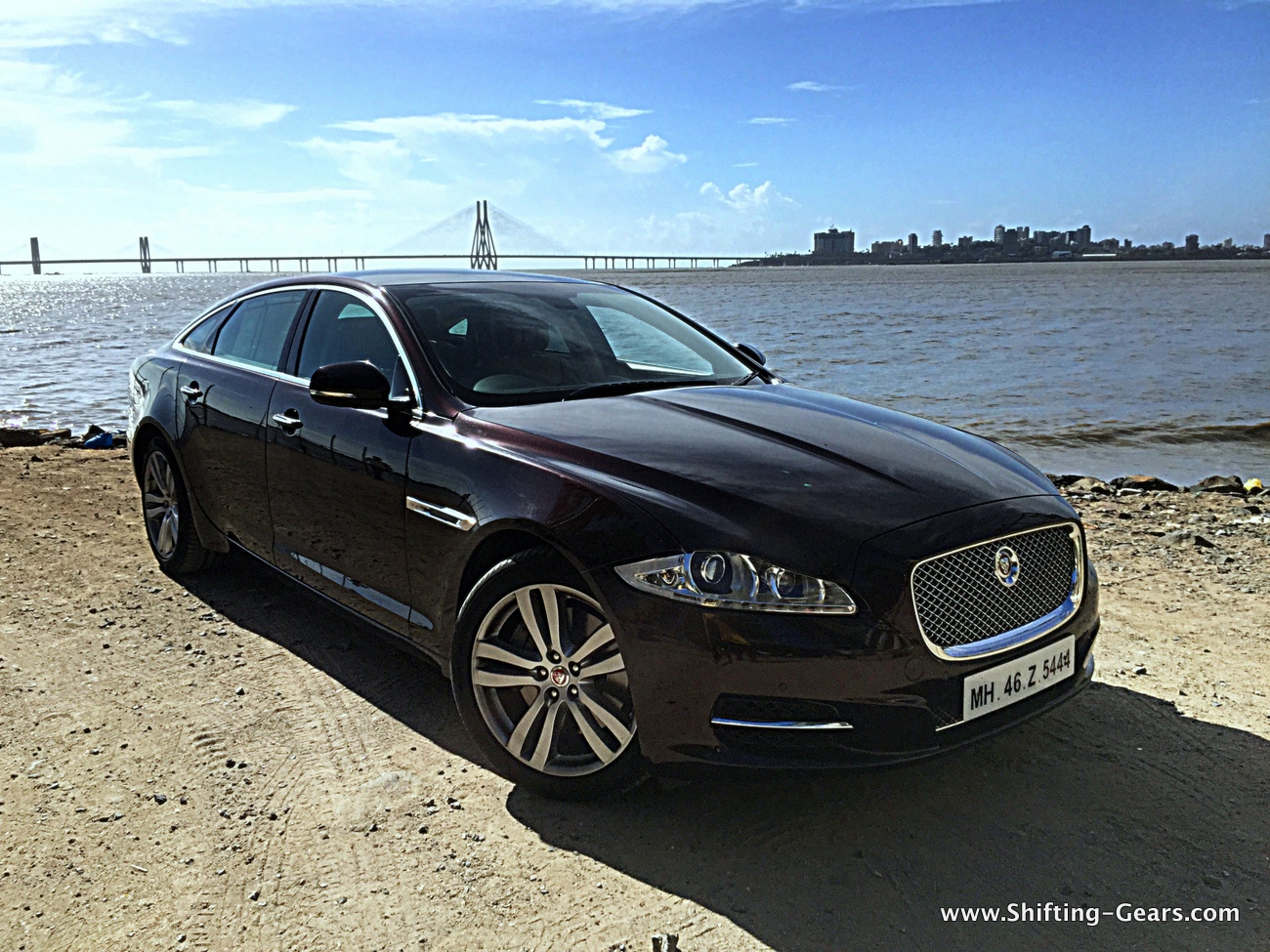 Out in front is a large & prominent chrome grille with a mesh like design which also houses the Jaguar logo. Quite like the logo itself, the front shout outs to make an impression. Front end design is like no other & you will not mistake it for any other model in the segment. Next to the grille, on either side you have sleek headlamps with LED DRL & a projector setup with HID. Below, where you get fog lamps, you get a chrome strip on the XJ. Also, the lower air dam on the bumper is almost covered by your number plate. The bonnet has prominent crease lines making an impression that there’s a very healthy & potent motor inside.

On the side, what strikes out the most is the 5 bi-spoke silver alloy wheels which fill up the wheel wells nicely. Also, the chrome garnish around the window sills shows off the cars length & sloping roofline very well. You also get a chrome ornament on the front fender & chrome accents on the door handles. There’s nothing fancy on the Jaguar’s exteriors. The brand likes to keep it underrated & classy. And there’s nothing wrong in that. 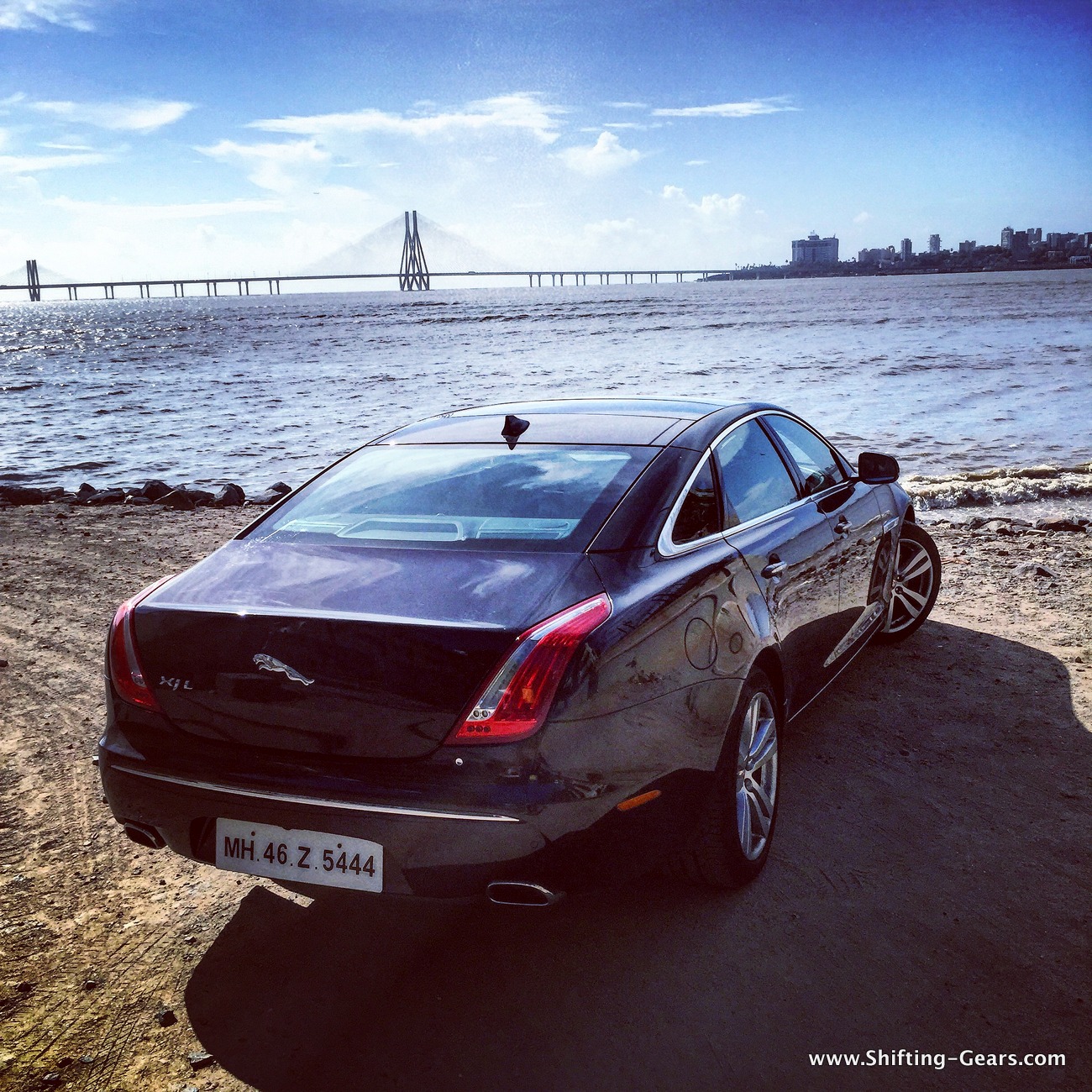 Come to the rear, and the sloping silhouette gives it a coupe like look. On the rear bumper, you have a chrome strip in the centre & twin exhaust tips on either end which stand out nicely. The tail lamps are stacked vertically, and offer good lateral visibility as well thanks to the LED setup. There’s a sharkfin antenna on top of the roof, above the rear windscreen. Badging is kept on the minimum side with just ‘XJ’ slapped on the tailgate. What’s interesting is the small chrome button below the RHS tail lamp, which is to pop open the trunk.

Overall, placed side-by-side with the competition, the current generation XJ will not really be the best looking model. But if you ask people, which brand they would prefer, we’re sure the brand will not be the last name in this race.

Interiors:
Underrated design language continues on the inside as well. Compared to latest competition which comes equipped with all the latest bells & whistles & hundreds of buttons on the dashboard; the XJ looks very simple & plain. Not bland though. The XJ offers the right amount of luxury feel & appeal inside the cabin. Jaguar offers a dark brown & beige interior colour combination. 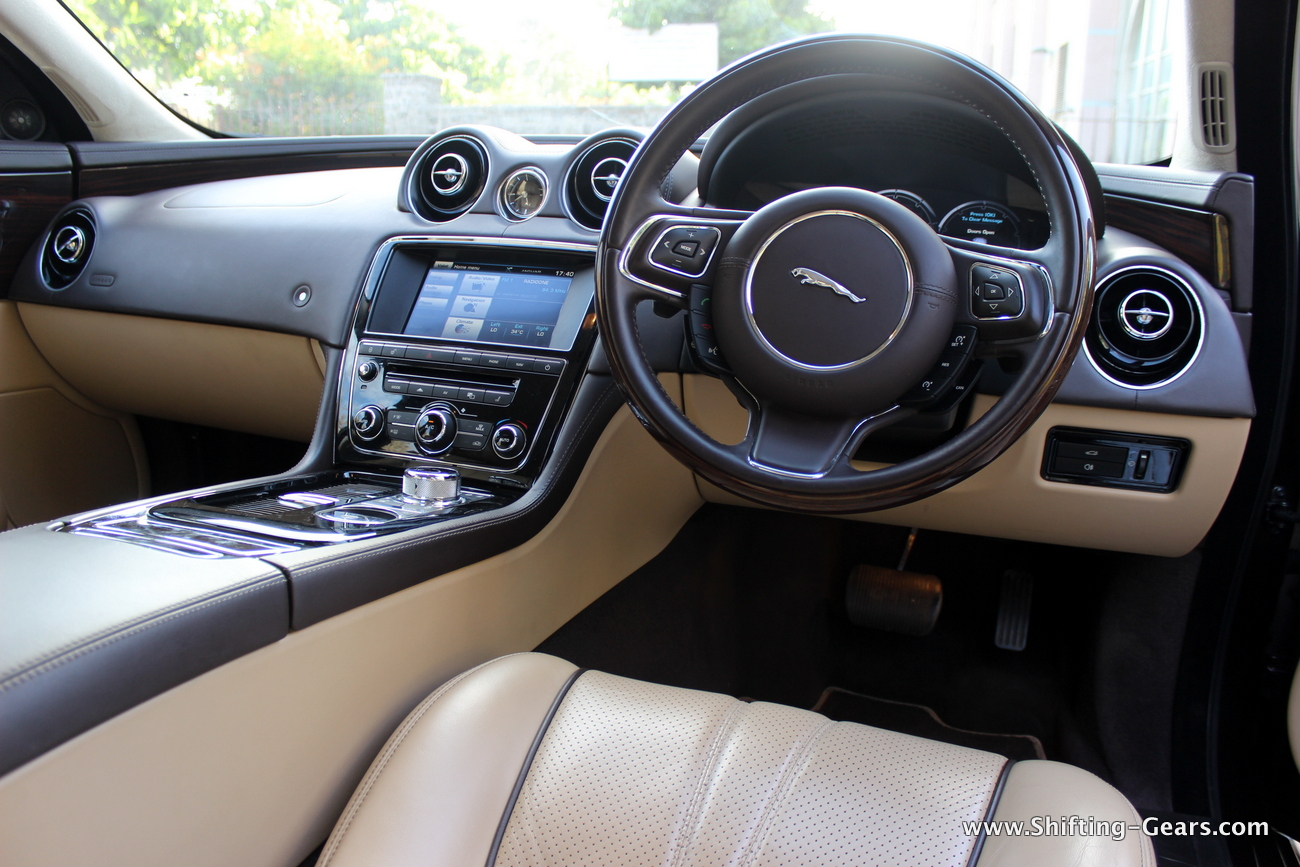 The steering has a deep dish like structure with the horn pad recessed noticeably. The steering with wood inserts also has heating option, which will barely be used here in India considering our weather conditions. Behind the steering, you have a 3 dial TFT instrument cluster display which looks a little boring & basic for this class of a vehicle. It does the job though by offering a host of information such as speedometer, odometer, revv counter, music info, fuel gauge, engine temperature, door open warning, exterior temperature, etc. It usually sports a bluish green backlit, but turns red when driving in dynamic mode. 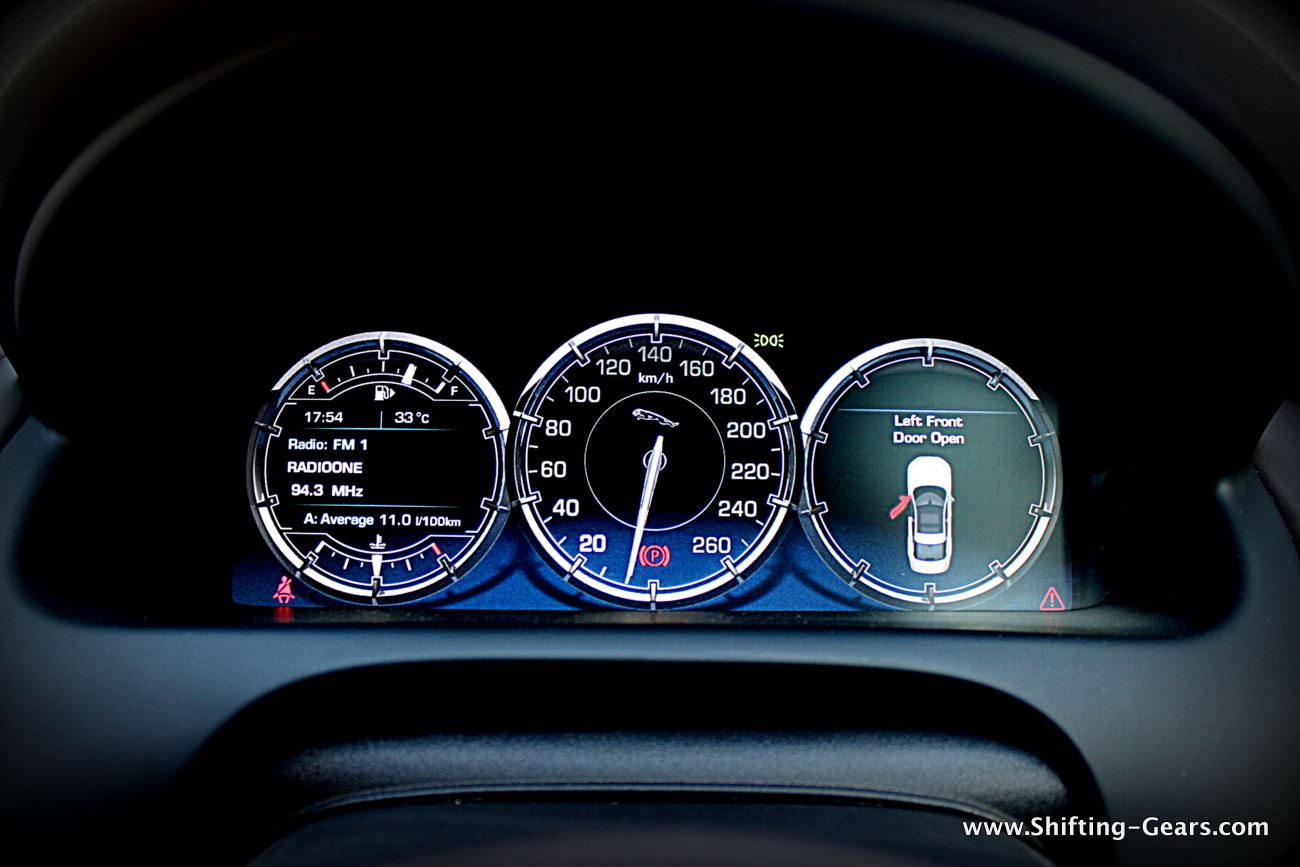 Centre console has two round AC vents on top which even carve out the dashboard in the same shape. There’s a analogue clock placed in between to add to the classy appeal. Below, you have a touchscreen infotainment system which looks dated. Touch & display quality both feel a bit below the mark. The Meridian surround sound audio system with 20 speakers delivers a very good music listening experience. Below this, you have the stereo & automatic climate control buttons. On the flat section of this centre console, you have the gear lever which is a rotary knob in chrome & feels very, very good. It pops out when the XJ is turned on. Other driving related buttons are placed here, next to the gear dial. This centre (floor) console is raised noticeably which also works has a driver & front passenger arm rest. On top, the XJ gets twin panoramic sunroofs. 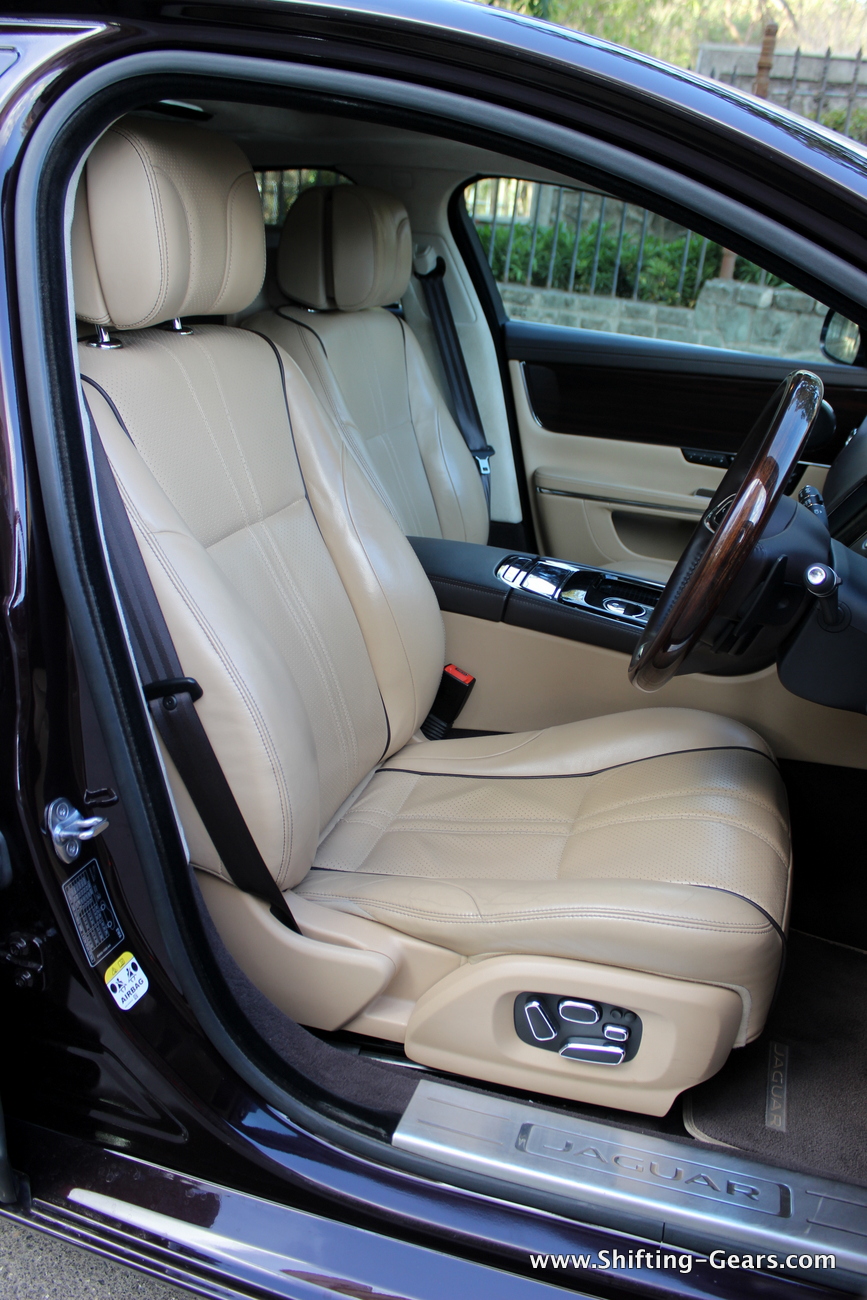 Driver seats wrapped in leather & electrically controlled get cooling function. This will be much appreciated considering the weather here in India and since sunfilms have been banned. Driver seat adjustment will keep the shorter as well as taller drivers happy. What most customers in this segment like is the massage function, which is available in the XJ as well. It keeps your back feeling good throughout the journey, but is preset for a couple of minutes & one needs to switch it on manually. 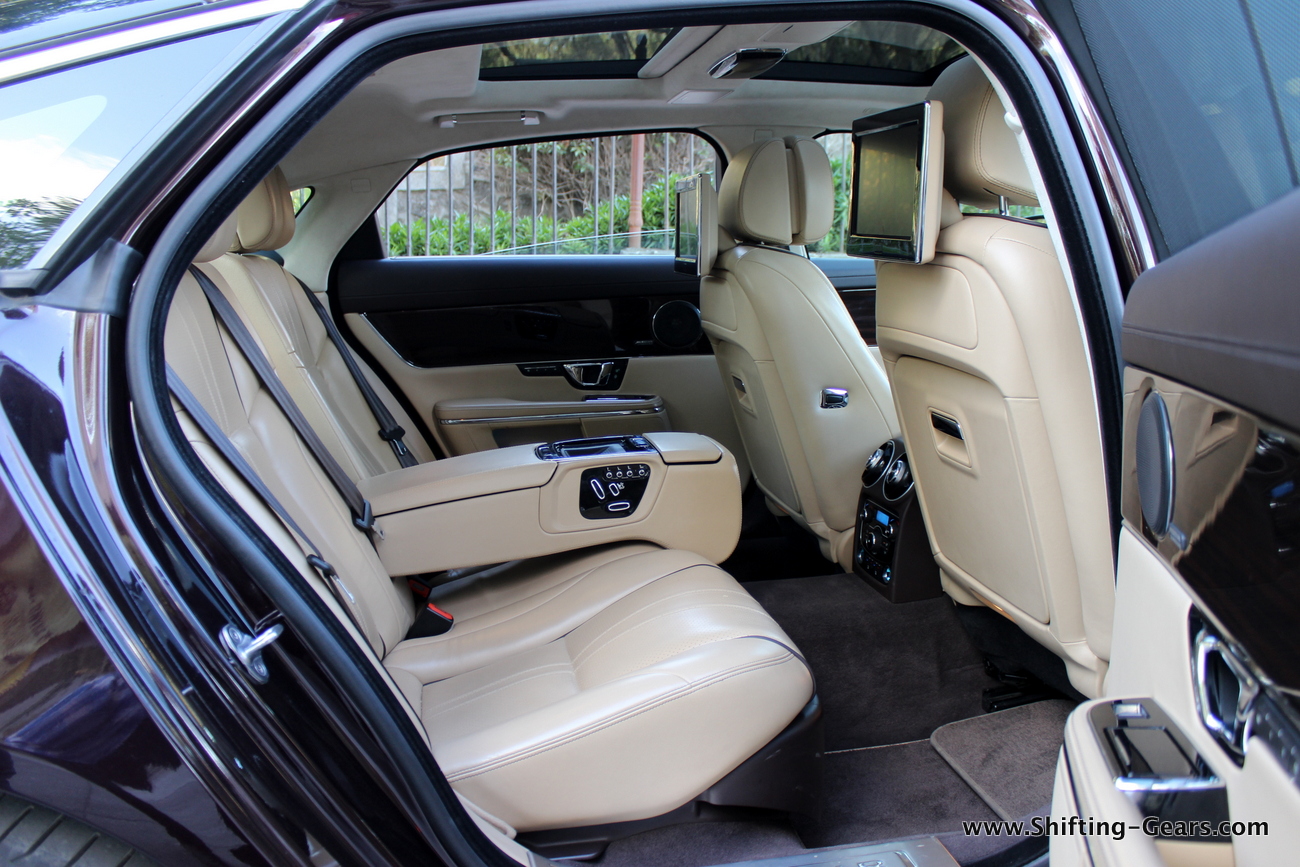 Back seat is where the game gets better. With a car of this size, rear seat comfort is very good. There’s ample room for two over here with the backseat reclining you offer you the best of comfort. Drop down the centre arm rest and you get all the electric controls for the rear seat. There’s also an ash tray placed in this centre console. Between the front seats is a small rear climate control unit with 2 AC vents & independent temperature setting. You also get 2 power units on this console. Cooling & massage functions are obviously available on the rear seats as well. 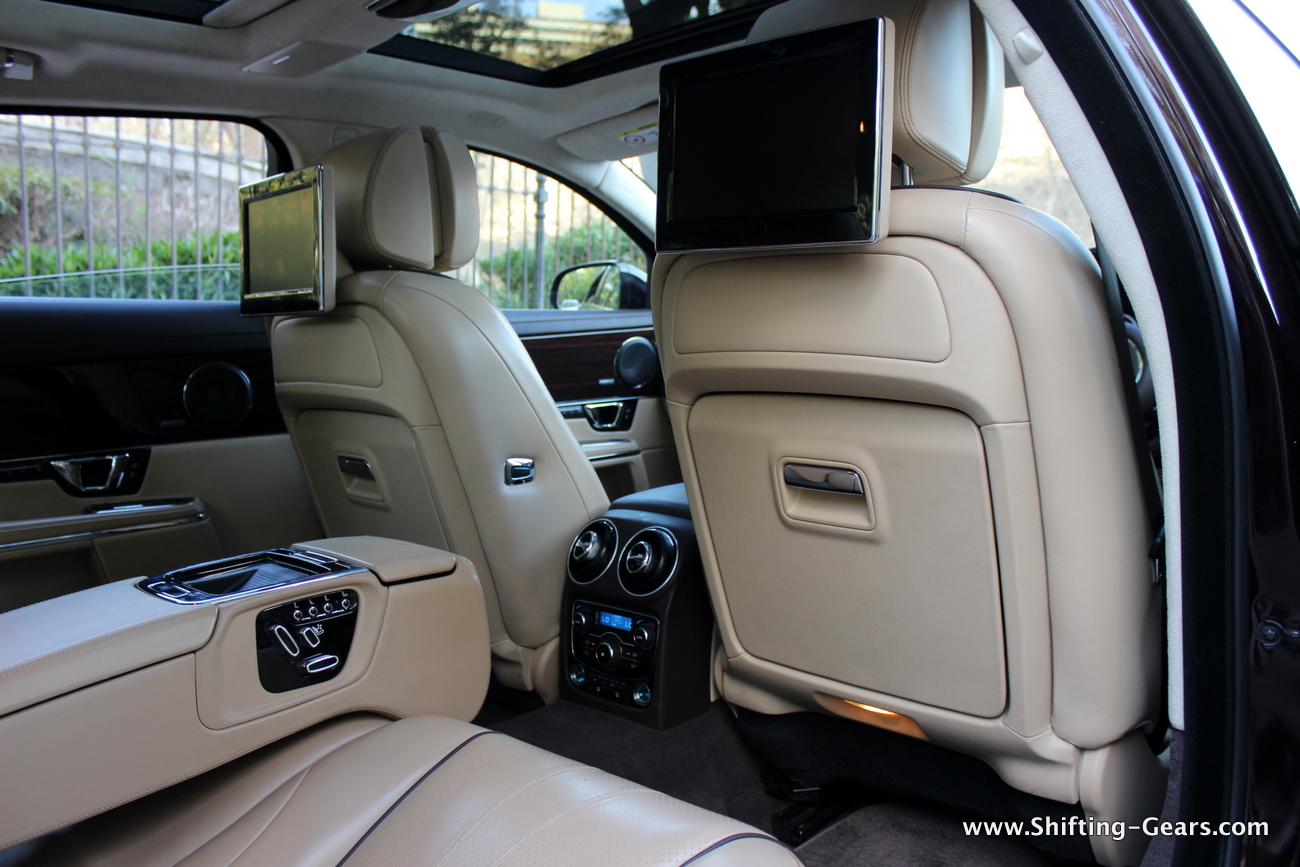 Open the boot and you can easily push in 3-4 large size bags. To close the boot, all you need to do is press a button.

Engine, performance & handling:
Powering the XJ diesel, the variant we drove, was a 3.0L, V6, turbocharged motor producing 275 PS of power & 600 Nm of torque matched to an 8-speed automatic gearbox. The steering wheel gets paddle shifts as well when the driver feels a little enthusiastic. The engine helps the XJ portfolio sprint from 0-100 kmph in 6.4 seconds and has an electronically limited top speed of 250 kmph.

Start off in the city & what you notice first is the silent cabin. NVH levels, as expected from a car in this class is exceptionally good. The diesel motor is barely heard inside the cabin & not heard at all from the rear cabin. 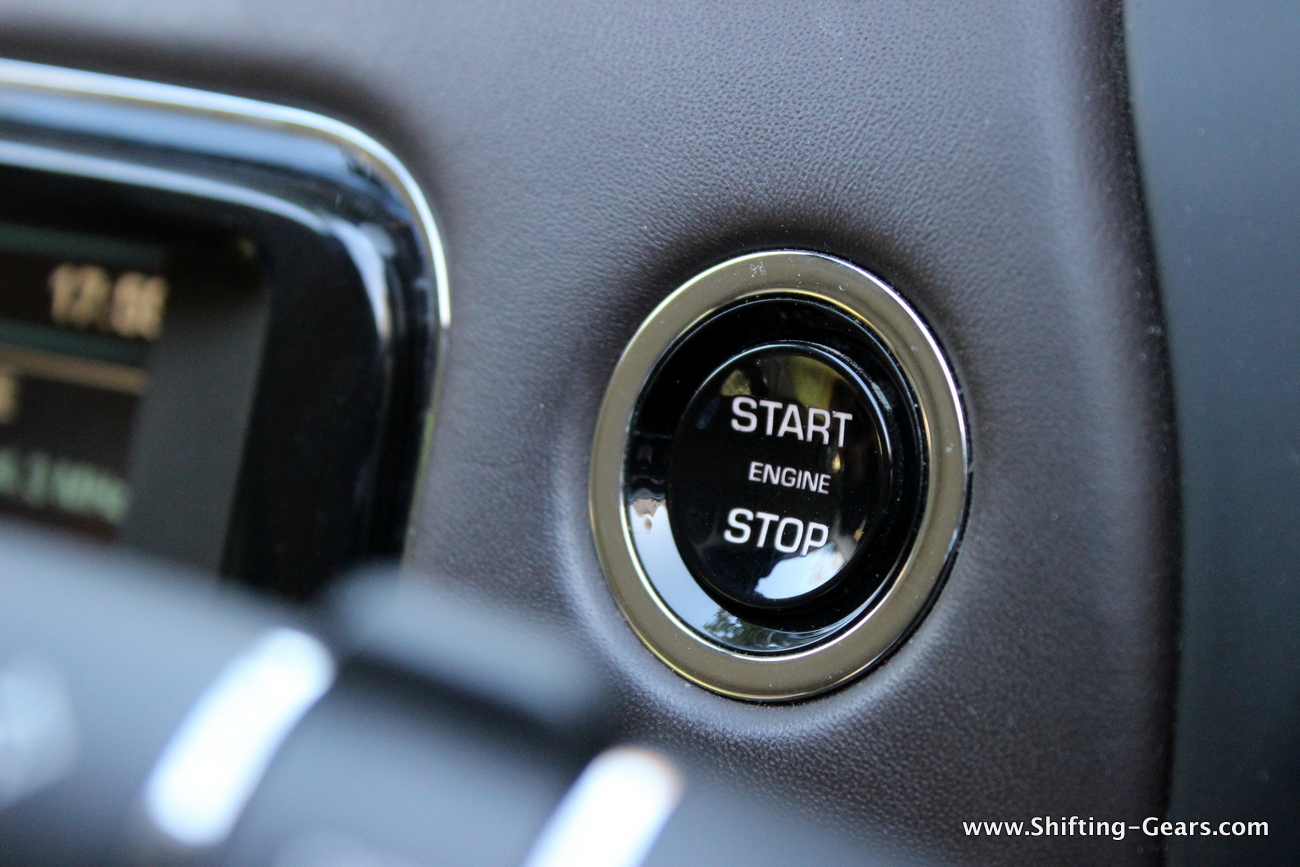 Jog the dial to ‘D’ mode and the XJ crawls with ease. In comfort mode, the gearbox tries to shift gears as early as possible to maintain a calm and composed ride quality. Although the steering and other controls are light, driving the XJ in tight city conditions however is a bit tricky. It is a flagship sedan and the size shows when you’re stuck in traffic. One cannot think of switching lanes easily because of the size of this vehicle. So if you want to enjoy the drive, we suggest you skip traffic situations or driving around the city late at night.

Hit the highway, switch to sport mode (or use the paddle shifts), and the engine responds much faster & stronger. In this case, the engine also shifts faster & later which can be felt by the passengers. In sport mode, the engine revvs clean all the way till 4,500 RPM while in Dynamic mode, the revv counter drops after touching the 5,000 RPM mark. At 100 kmph in top gear, the XJ’s motor feels very comfortable just at 1,400 RPM. However, a small tap on the engine is good enough to prompt a downshift & overtake traffic.

The XJ is a long car, and hence, only a sedate driving style is what suits the best. However, with ample electronic aids, the XJ is tight around corners as well. With adaptive dynamics, the XJ maintains composure even when on your favourite twisties. However, one needs to be careful while pushing hard as the rear does feel heavy around mid corners. If you’re driving in rain or moist conditions, you can even switch to the winter mode which will offer you better traction. 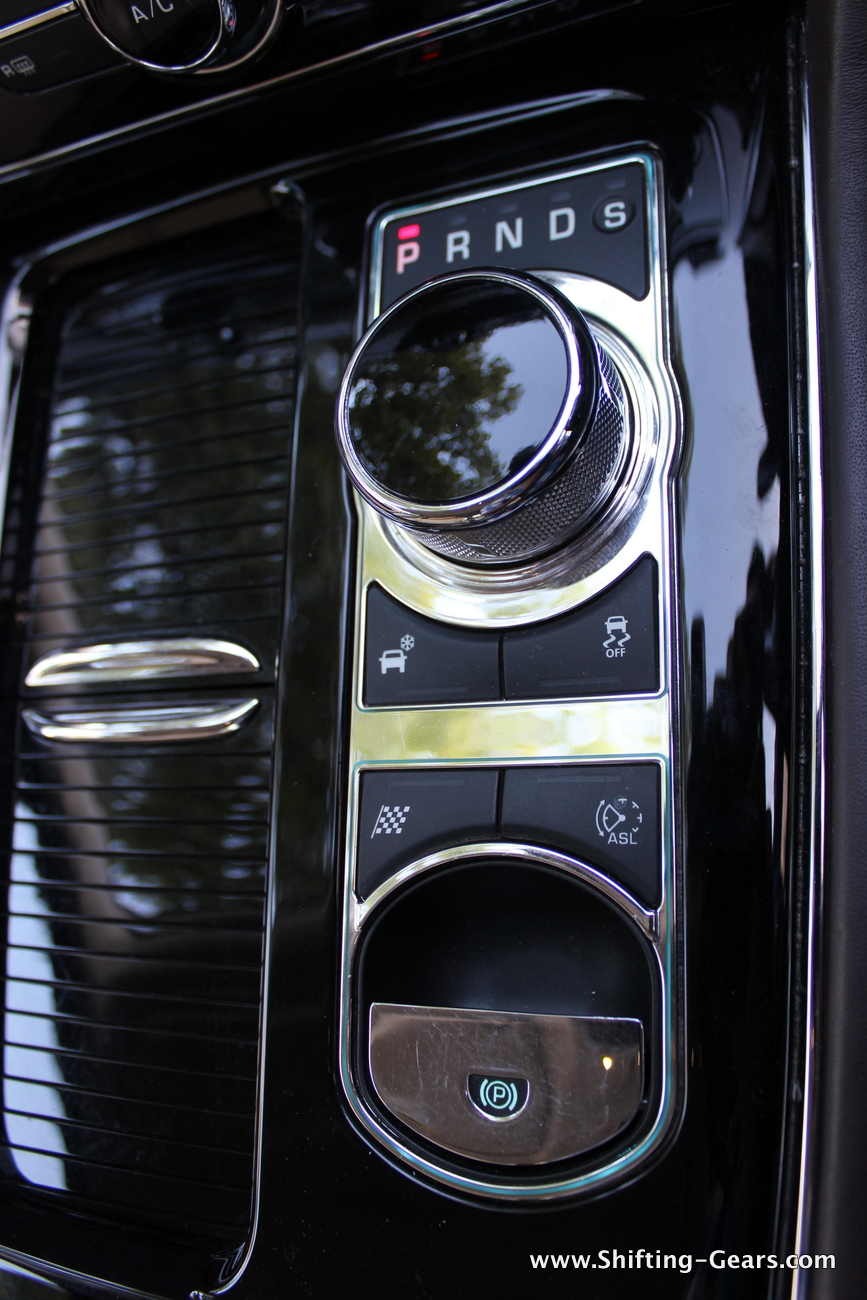 Ride quality is very comfortable for front as well as rear passengers. While moving over potholes, the cabin remains calm & absorbs the thuds well. Ground clearance however is on the lower side and you need to be careful not to scrape the lower body over speed breakers. Braking performance from all four disc brakes is as good as any other car in the segment. Brake bit is progressive & does not make the occupants uncomfortable.

The luxury segment in India has 5 top brands battling out to lure customers. Jaguar slots in behind Mercedes-Benz, Audi & BMW in the sales & service department while Volvo is further behind the British brand. Click here to read what’s in store with the new Jaguar XJ facelift heading to our showrooms in 2016.