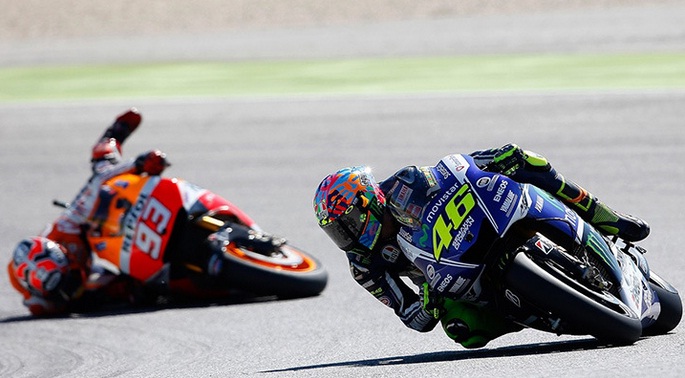 It’s 6th of November and the beginning of the most hyped MotoGP Season ever.

People are biting their nails in excitement to see the most hyped trio rivalry in the history of MotoGP including star riders Valentino Rossi, Marc Marquez & Jorge Lorenzo.  Not to mention, that, this season of MotoGP has been with the utmost twists and turn and rivalry actions that audience could ever crave for. From Valentino Rossi pulling out Marquez wide at the corners of Sepang, or be it the crash of Marc Marquez and Honda Racing Corporation blaming Rossi for the fall or the decision of FIM for Rossi to start from the back end of the racing grid at the last race of the season, i.e. Valencia.

Things were never very tidy in MotoGP and Rossi has also previously been claimed of doing nuisance with other riders over the track (let’s not forget Casey Stoner) while the utterly huge fan following of Valentino and his VR46 brand has never ever seen such a high too, which, they are witnessing for the Valencia race.

In a recent set of events, CAS has cancelled out the appeal filed by Valentino Rossi against the decision of FIM for cutting three points and starting from back of the grid. Rossi claims that he never touched Marc intentionally and it was him who first went inside. Rossi had also claimed that he just wanted Marc to go wide and loose the race line but Marc intentionally slowed down at Sepang Circuit to benefit Lorenzo. But, after being rejected with an appeal, that Valentino and team were looking up to, Valentino gave a statement saying “I regret of making Marquez go wide”. On the other hand the HRC star rider Marc Marquez told media “I expect no apologies from Rossi, but, i just want to talk to him after the race”.

8th November is the race day. Rossi still is leading championship by 4 points. Practice session starts from today, all eyes on the Italian track. Fans will be colliding, it’s not just a clash for title but a clash of ego, clash of stardom, clash of passion, clash of rivalry. Let’s see who wins.