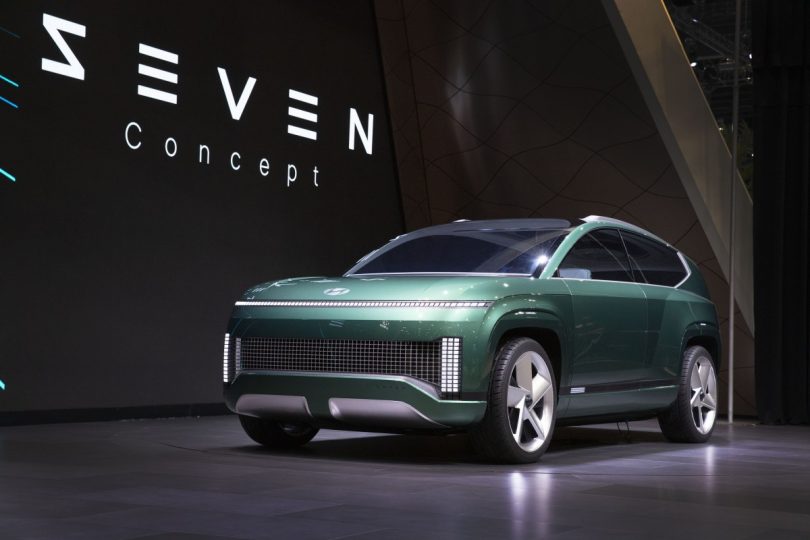 South Korean automotive giant Hyundai has unveiled its latest SEVEN sport utility electric vehicle (SUEV) concept at the AutoMobility show, LA. Hyundai will display the new SEVEN concept alongside its IONIQ 5 and the XCIENT Fuel Cell from November 19th-28th. The new SEVEN concept opens a new chapter for Hyundai’s IONIQ brand as it showcases itself as a dedicated BEV.

Prior to this, Hyundai unveiled its 45 concept in 2019 and the Prophecy concept in 2020. According to Hyundai, differentiated design and technology innovations prioritize customer values over industry norms for an electrified mobility future. The SEVEN concept SUEV also represents the brand’s commitment to achieving carbon neutrality by 2045.

To break away from the traditional design language of an SUV, Hyundai has implemented other unique styling elements. These include a low leading-edge hood, a single streamlined roofline, an elongated wheelbase, and Active Air Flaps for enhanced aerodynamics. The concept SEVEN also sports IONIQ’s signature Parametric Pixel lights which sport a Welcome Light Sequence on start-up. The lights feature a design that links digital and analogue styles with an emphasis on every single pixel.

Hyundai has designed the concept’s interior to mimic a premium lounge in preparation for an autonomous driving era. Along with a 3.2-meter wheelbase and flat floor, the SUEV sports Pillarless Coach Doors, revealing the interior. For the driver’s seat, Hyundai offers a retractable control stick that hides away when not in use.

The lack of traditional driving controls has allowed Hyundai to implement an ultra-slim cockpit with integrated screens. The brand has added swivelling lounge chairs with a curved bench seat which are customizable depending on the driver-controlled modes. Thanks to the flexible seating position, passengers can customize the various in-car appliances offered on the SEVEN concept.

Hyundai has focused on a human-centred approach which enables the concept of SUEV to envision a future of mobility and connectivity. Other interior details include a built-in mini-fridge, shoe-care compartments, and a panoramic screen roof that displays passenger-based content. Hyundai has also implemented a Universal Island console, specially-designed home appliances, and a multi-functional Smart Hub graphic user interface.

To ensure a safe and healthy travel experience, the SEVEN concept SUEV uses a variety of eco-friendly materials. These include a Hygiene Airflow System, UVC Sterilization, hygienically-recycled exterior bio-paint, and several renewable materials throughout the interior. These consist of materials made from mineral plaster, bamboo wood, and bio-resin to reduce pollution from the production process.

To ensure that all surfaces inside the SEVEN remain clean at all times, Hyundai has used copper and hygienically-treated fabric. The Hygiene Airflow System takes inspiration from the airflow management found on passenger aircraft. In vertical mode, the roof-rail mounted air-intakes allow air to pass through the bodywork. This air then exits via the exterior vent behind the rear wheels, which allows for increased airflow.

In horizontal mode, the air flows from the dashboard to the rear vents reducing cross-contamination among the front and rear passengers. Hyundai has designed the system to act independently regardless of the vehicle’s position or movement. Upon vacating the vehicle, the UVC Sterilization system activates, during which the control stick, first-row storage drawer, and speakers pop up. After this process, the UVC lights sanitize the cabin space of all bacteria and viruses.

Hyundai claims that the SEVEN will provide an outstanding driving range with fast-charging capabilities thanks to its versatile E-GMP platform. The brand states that with a 350-kW charger, the SUEV can charge from 0-80% in about 20 minutes. Hyundai has also designed the concept to achieve a driving range of over 300 miles. 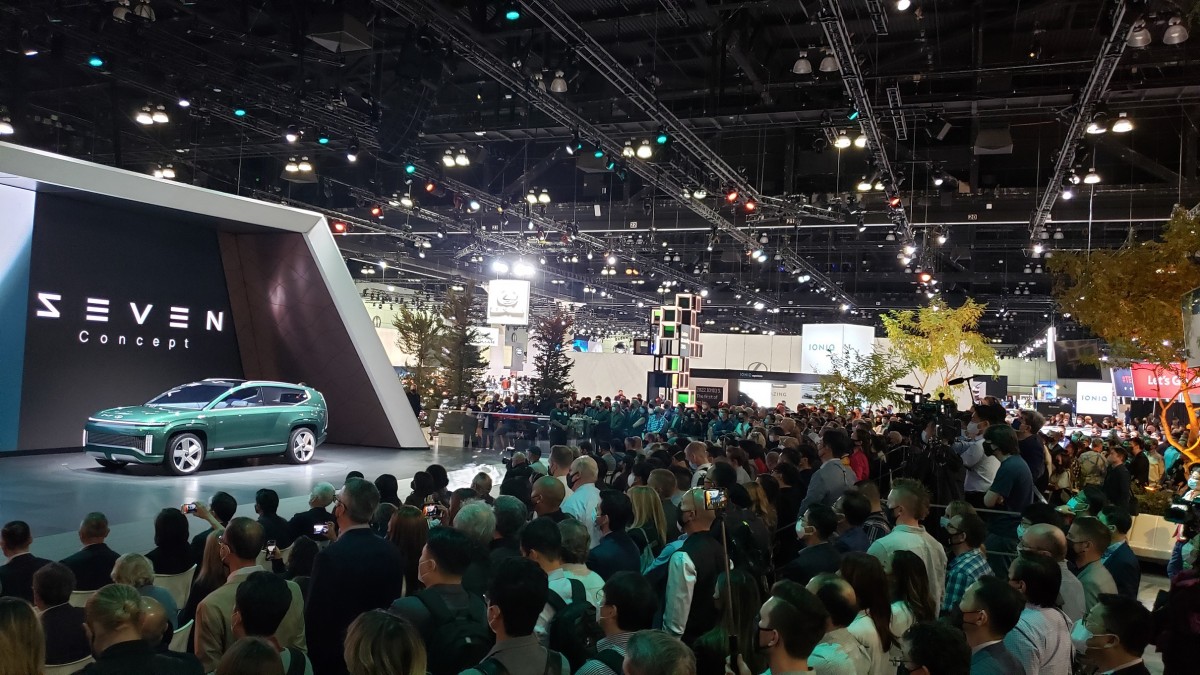 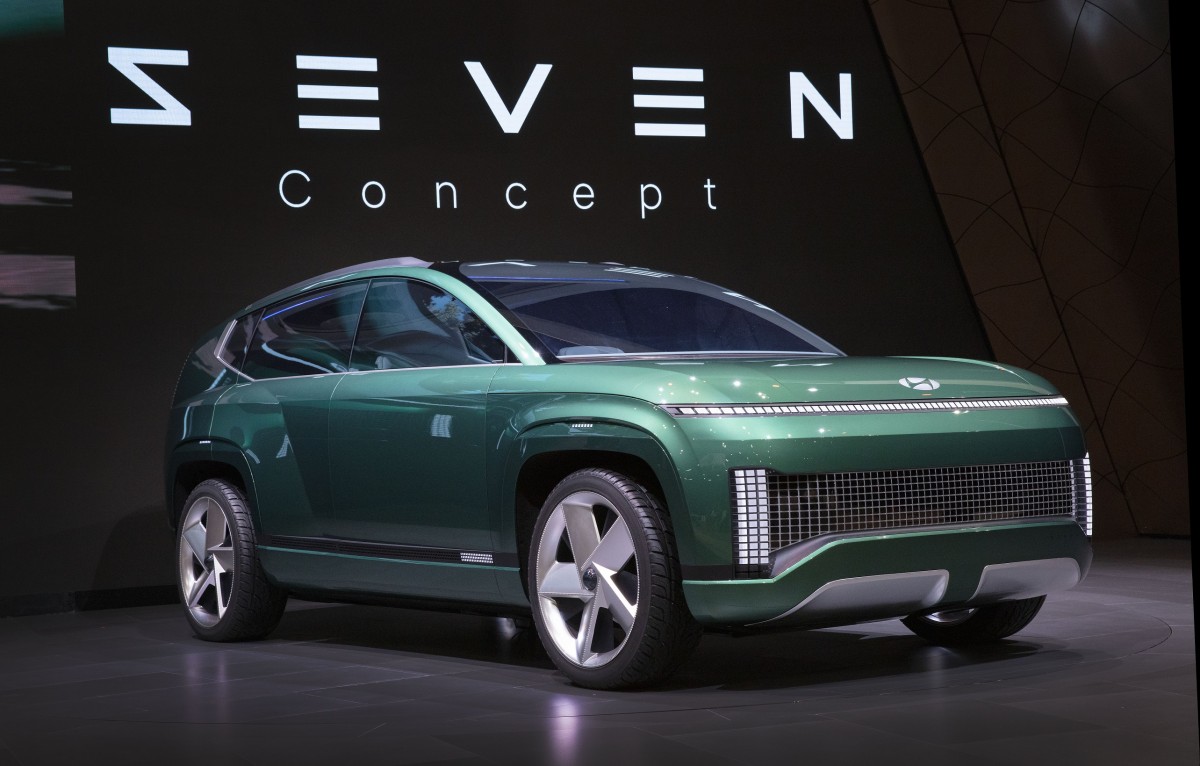 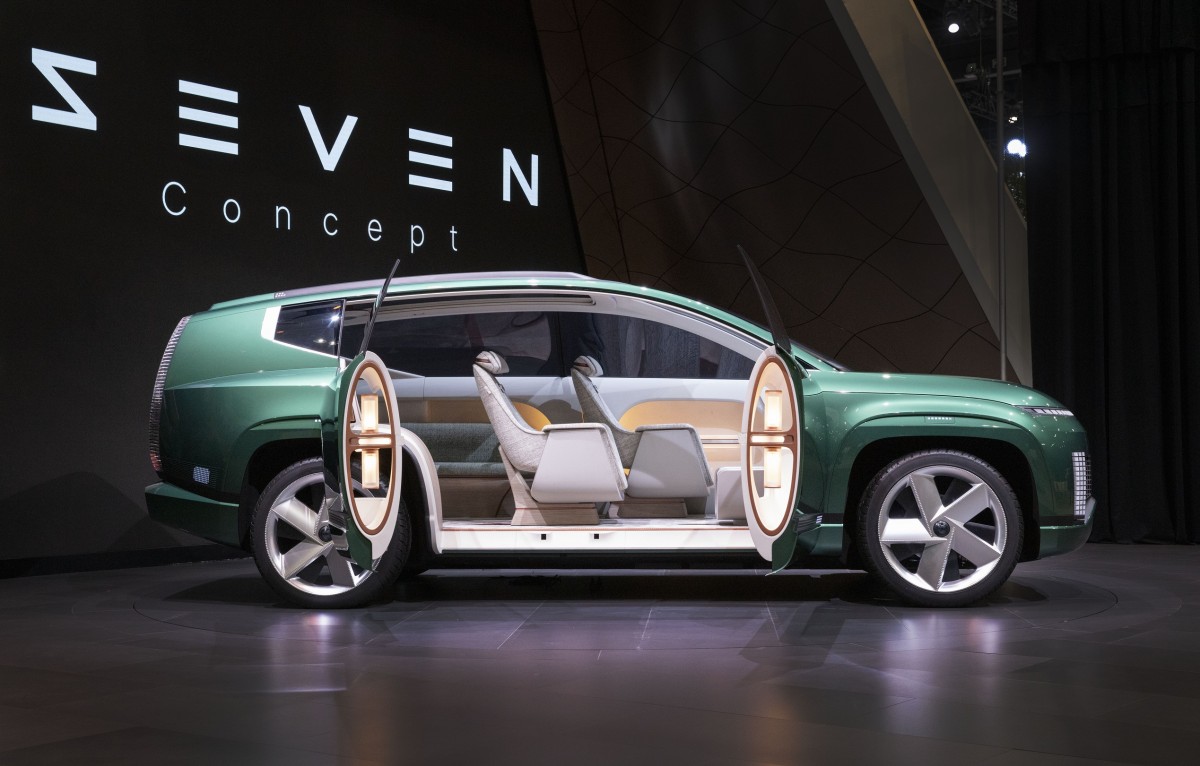