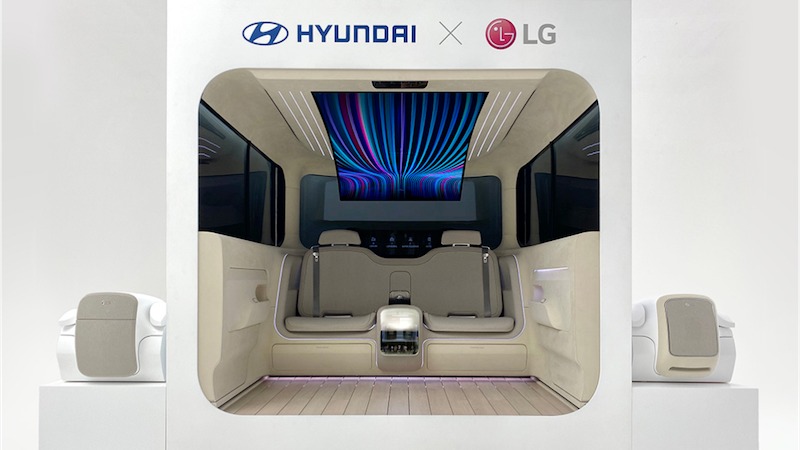 After the launch of its new Battery Electric Vehicle division dubbed the IONIQ, Hyundai Motor Company has unveiled the IONIQ Concept Cabin which showcases the latest in-car experience that Hyundai will be offering for its dedicated EVs in the near future. The IONIQ Concept Cabin made in partnership with LG Electronics and gives us a glimpse of the possibilities in Electric Vehicle interiors.

The new concept cabin will boast features such as a ceiling-mounted 77-inch flexible OLED screen for the passengers that emit sound through the headrests creating a personal sound zone. The IONIQ EVs will also have “Clothing Care” and “Shoes Butler” that allows occupants to handle tasks on the go. In addition, the IONIQ cabin will also be kept clean and disinfected by employing a floor cleaning robot along with the overhead UV LED lights.

Hyundai reveals that the brand will exploit the abundant interior space and vast power supply capacity of EVs to integrate the home electronics and appliances in the future IONIQ EVs, which will all be customizable according to the needs and lifestyle of the customer. The brand has also revealed that the value-added experiences will be equipped on the IONIQ 5 which is slated for its debut early next year.

The IONIQ electric vehicle will make use of the E-GMP (Electronic Global Modular Platform), Hyundai’s dedicated EV platform, and Hyundai will introduce three new innovative electric models in the next four years to fulfil the demands from the accelerating global EV market.

Earlier the brand announced that under the IONIQ brand it will launch three numerically numbered electric vehicles with even numbers used for sedans and odd numbers for SUVs. The first model under the IONIQ brand will be the ‘IONIQ 5’ a midsize CUV (Crossover Utility Vehicle) based on the concept EV ‘45’. The second in the range will be the IONIQ 6, a sedan that will be introduced in 2022 based on the Hyundai Prophecy Concept and the third, a large SUV IONIQ 7 is slated for its debut in 2024.