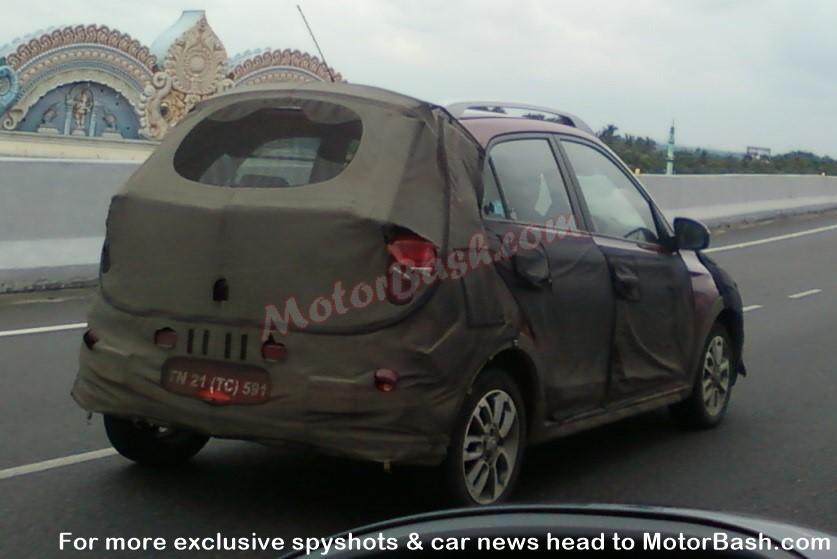 We all know by now that Hyundai is working on a compact-SUV in the form of the ix25 which has been spotted testing multiple times on Indian soil. Now however, another test mule has been spotted which is expected to be the recently launched Elite i20 based crossover.

To cash in on the compact-SUV and crossover fever of the Indian market, Hyundai seems to jump into the bandwagon of releasing a beefed up version of their hatchback and simply pose like an off-roader. The camouflage used on the test mule is typical of Hyundai with a raised tail section. On the test mule, you can also find body cladding over the front wheel arch and chunky roof rails. The car also seems to be riding taller and hence, the ground clearance also seems to be worked upon. The car sports new alloy wheel design, ORVM with LED turn indicators, functional rear fog lamps on the rear bumper, slightly different window sills and tail lamps look similar to the Elite i20 (from what is visible). Number plate is mounted conventionally on the rear bumper unlike the higher placement on the ix25.

The crossover once launched will fight against the Volkswagen Cross Polo, Toyota Etios Cross and Fiat Avventura.

This test mule however clears the air about the pricing for the ix25. Since this is a beefed up Elite i20, the pricing will be higher by ~ Rs. 50,000. Hence, this crossover for its top model should command somewhere close to Rs. 10 lakh on-road. So the ix25, which will be a full-grown compact-SUV and not a crossover will surely have the pricing significantly higher than this, and probably, more close to the Renault Duster than the Ford EcoSport.