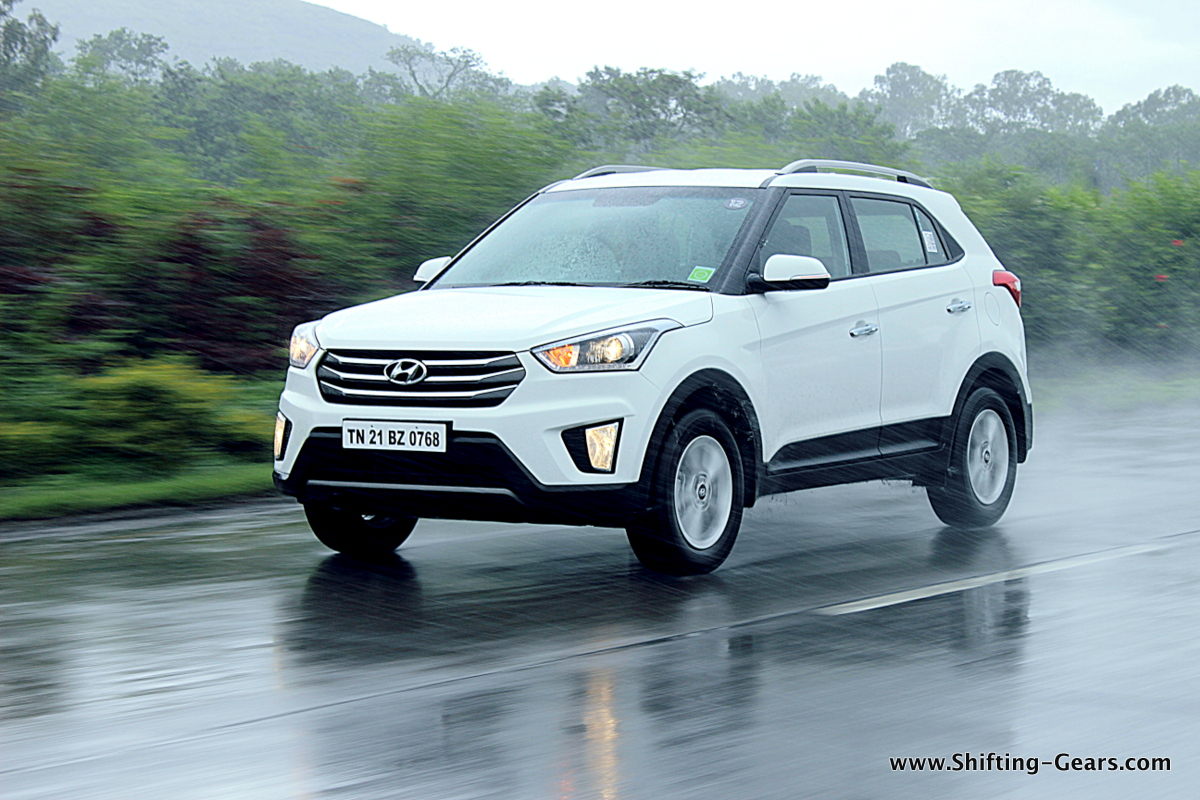 Hyundai has hit a home run with the launch of the Creta SUV in the Indian market. While most of the Hyundai products have always managed to wow customers, the Creta, which stands at a much higher price point has also helped the South Korean manufacturer maintain their stand of introducing cars which are well accepted in the segment.

Within 2 weeks of launch, Hyundai claims to have registered over 20,000 bookings for the Creta & the waiting period for certain models is as long as 8 – 10 months. 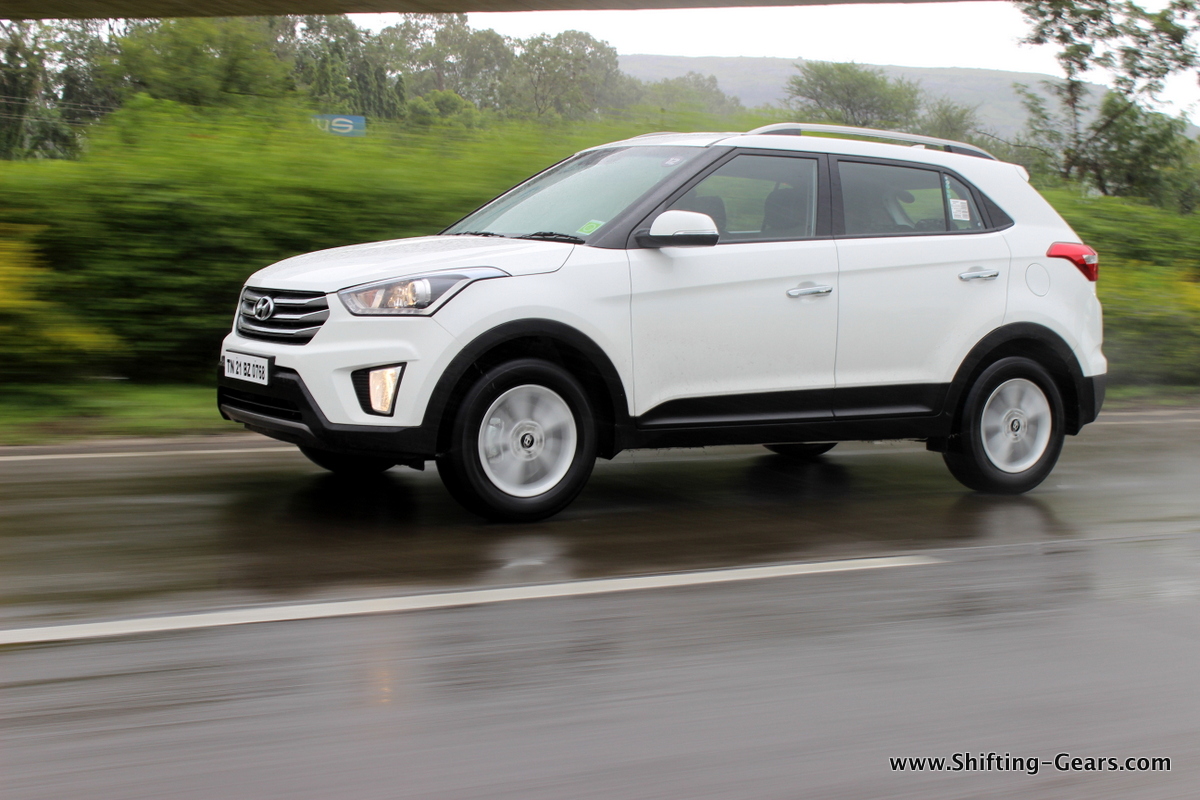 Hyundai invited us to drive the new Creta post the official launch and we got out hands on both, the 1.6L petrol & diesel versions. Sadly, the 1.4L diesel-powered Creta was not a part of the media drive. We’ve driven both the powertrains for over 100 kilometres in the city, hills and on open highways.

The petrol motor of the Hyundai Creta is a 1,591cc, 4-cylinder, naturally aspirated unit with variable valve timing which produces 123 PS of power @ 6,400 RPM & 151 Nm of torque @ 4,850 RPM matched to a 6-speed manual gearbox. Hyundai claims that this motor can deliver up to 15.29 kmpl of mileage. Realistically, expect the car to deliver around 9 – 10 kmpl within the city & around 15 – 17 kmpl on the highway. There’s no DTE or instantaneous fuel efficiency displayed, so the calculation will have to be done manually. 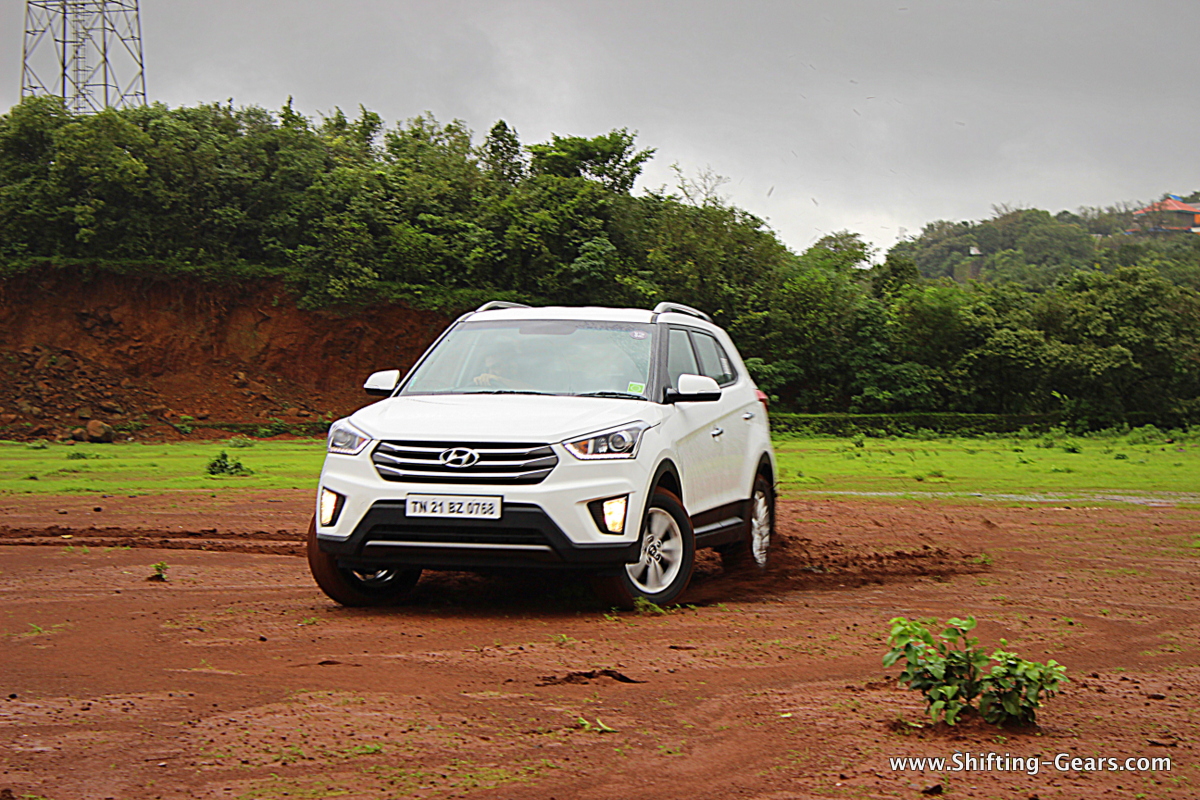 Fire up the petrol motor and the engine idles a notch below the 1,000 RPM mark. NVH levels are fantastic and you can barely tell that the engine is running. Our fellow journalist tried to crank the engine although it was running. There almost 0 vibration felt on the paddles, steering or gear lever.

Start off and the engine calmly gains momentum. The petrol motor is refined and the revvs climb clean. There’s not too much of torque available lower down the revv range and hence, you do have to push the pedal to keep moving forward. Don’t hold this as a negative though, it’s just that the crawling abilities are unlike SUVs, which are primarily powered by diesel units. Low-end performance is adequate and if you floor the pedal, you can spin the wheels even in second gear. Power delivery is linear, but you do feel a slight spurt over 2,000 RPM. For the city, the Creta is a decent performer. Steering is light & zippy, clutch pedal has medium travel and is light too. The gear throws are also short & the gear gates are well defined as well. With a good viewing angle from the driver seat, the Creta is easy to maneuver in traffic as well.

Hit the highway, floor the pedal, and you will be surprised with the refinement levels. Even at triple digit speeds, the engine is barely audible inside the cabin (in top gear). Although, if you stay higher in the revv range, say above 3,000 RPM, the engine does get audible inside the cabin. The Creta petrol accelerates quickly well over 80 kmph, in second gear itself. There’s no torque steer felt as such (it’s not as torquey anyway) while gunning it down the straights. Mid-range performance will keep most of the drivers happy but the top-end grunt feels a bit lacking. Power delivery tapers off beyond 4,500 RPM and things don’t really excite beyond that point. We wouldn’t say that it is underpowered, but is surely isn’t exciting enough. If speeds drop noticeably, rolling back to action in the same gear takes time. It takes a looooong time if you let the speed drop below 60 kmph in 6th gear and then floor the pedal to make swift progress. You have to downshift, more than just 1 cog to gain momentum. 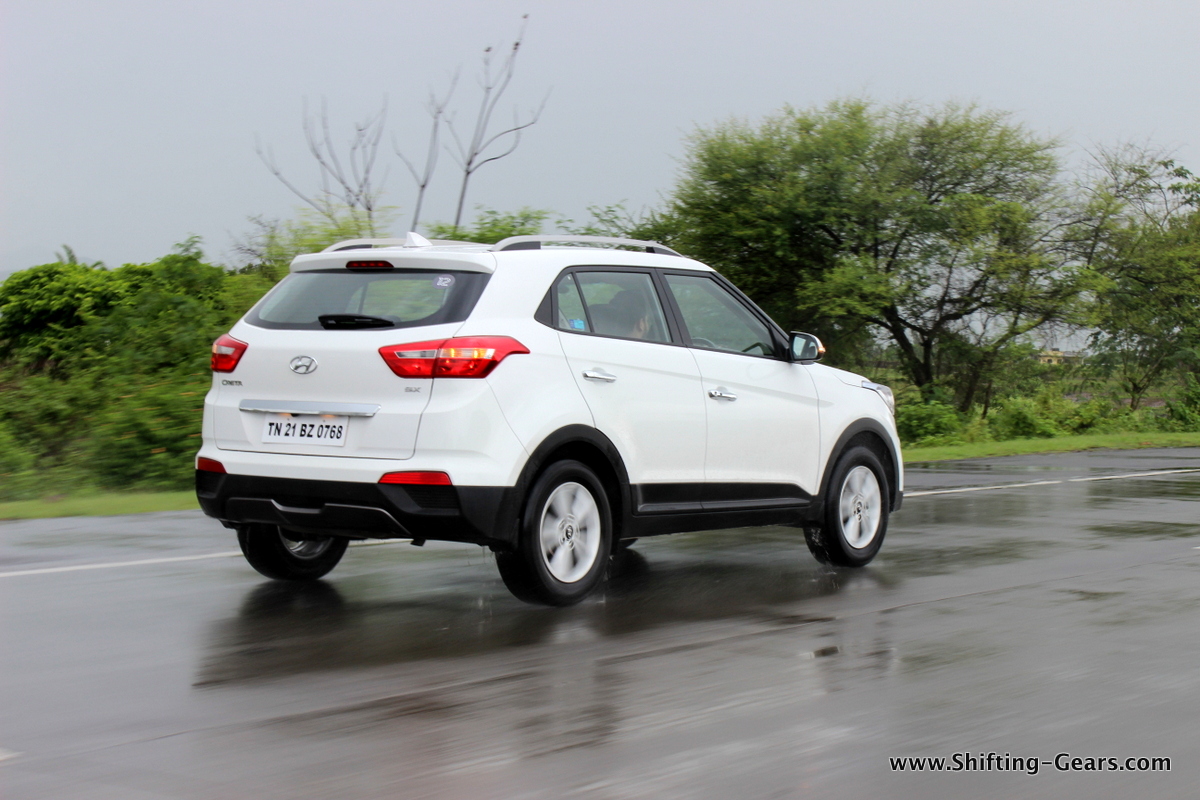 Hit the ghats & the engine clearly feels deprived of torque. We drove it up & down the Lonavala ghats twice, back-to-back and found out that the gearbox needs to be worked a lot. The petrol motor, even with 2 on board doesn’t really manage to keep up the momentum. Even 3rd gear was insufficient at times and a downshift to 2nd was inevitable. After we got to grips with the power band though, we managed to play with the Creta in the ghats nicely. We just hope there was a little more grunt available to reduce the number of gear shifting. 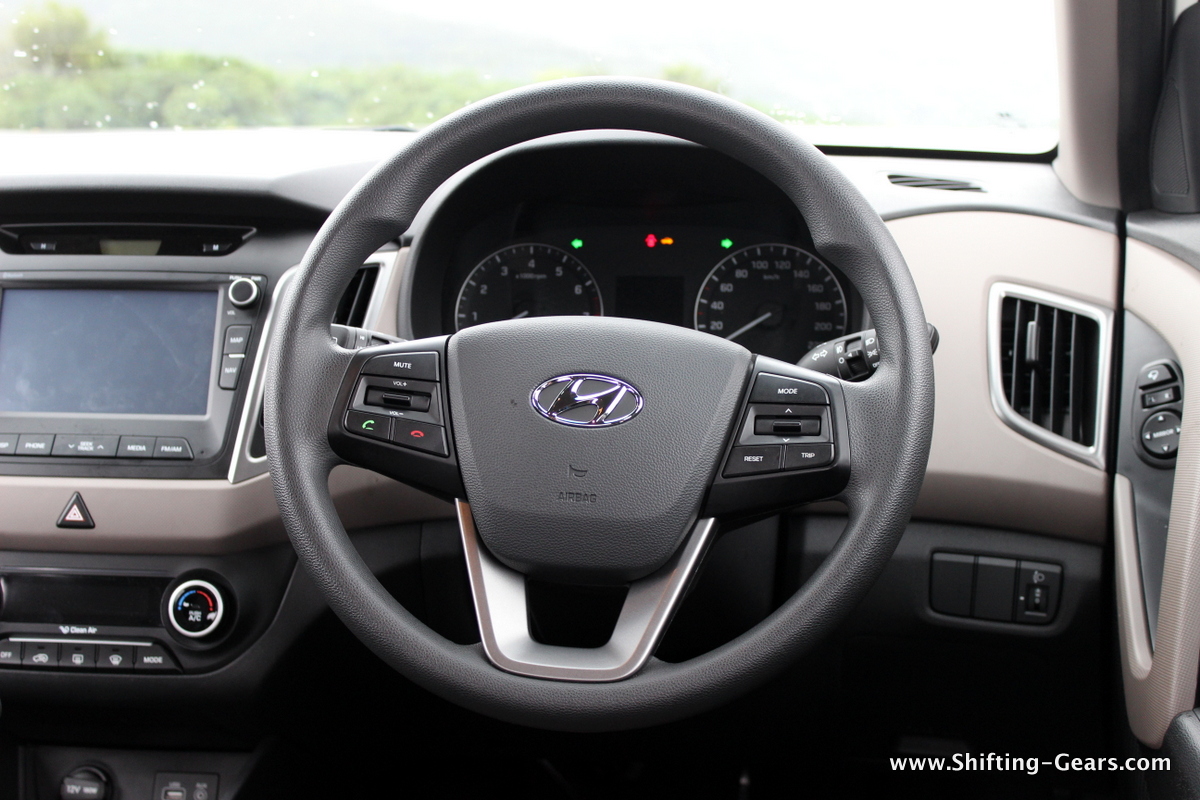 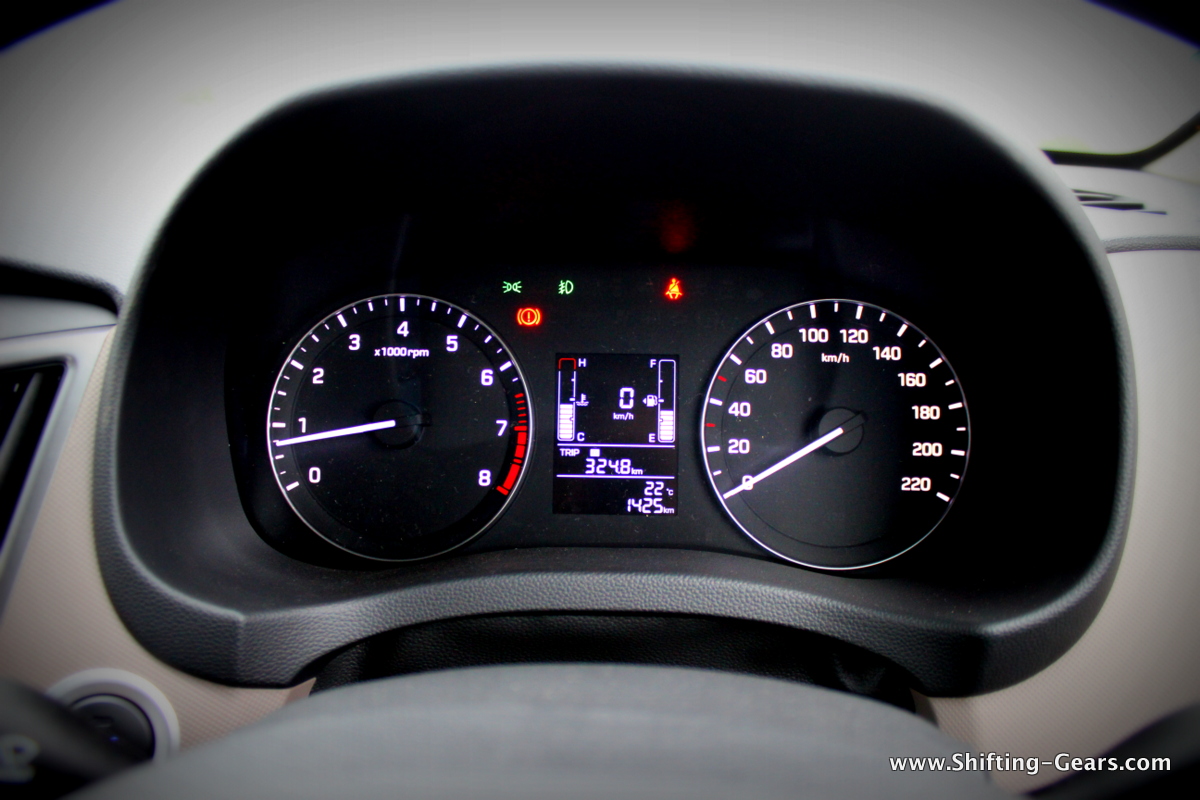 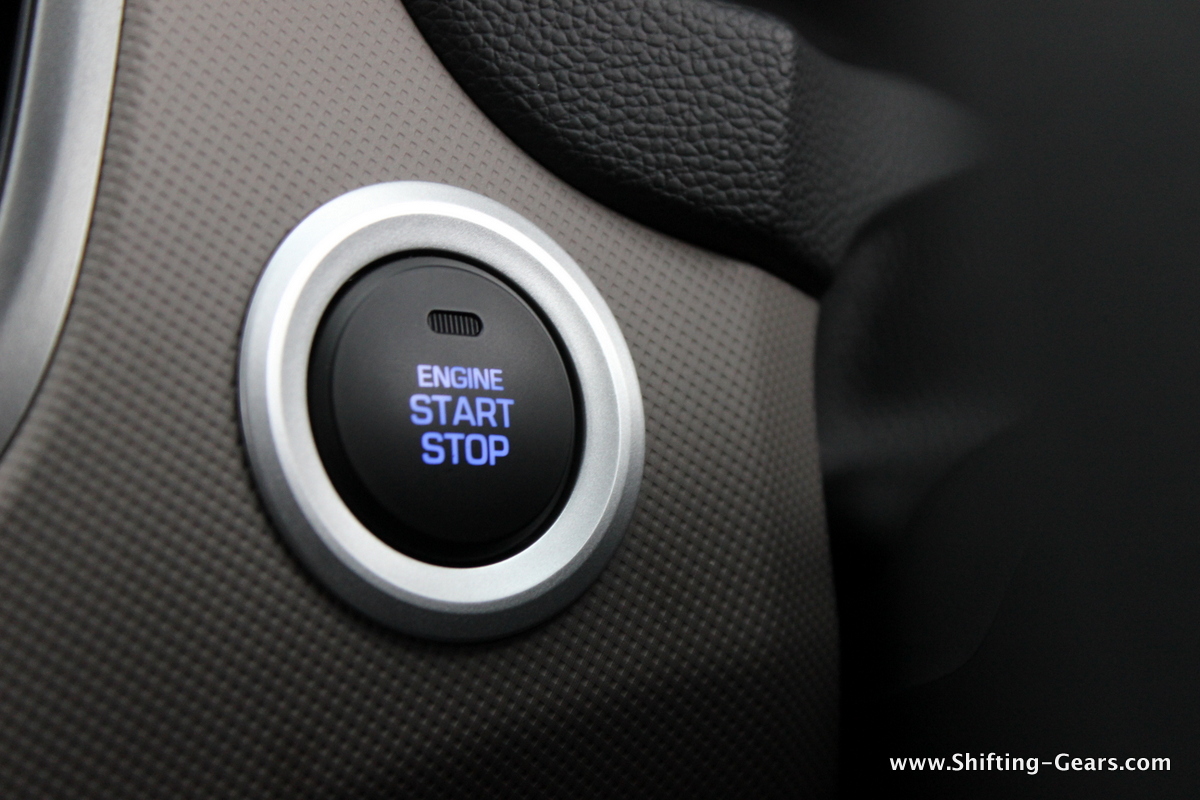 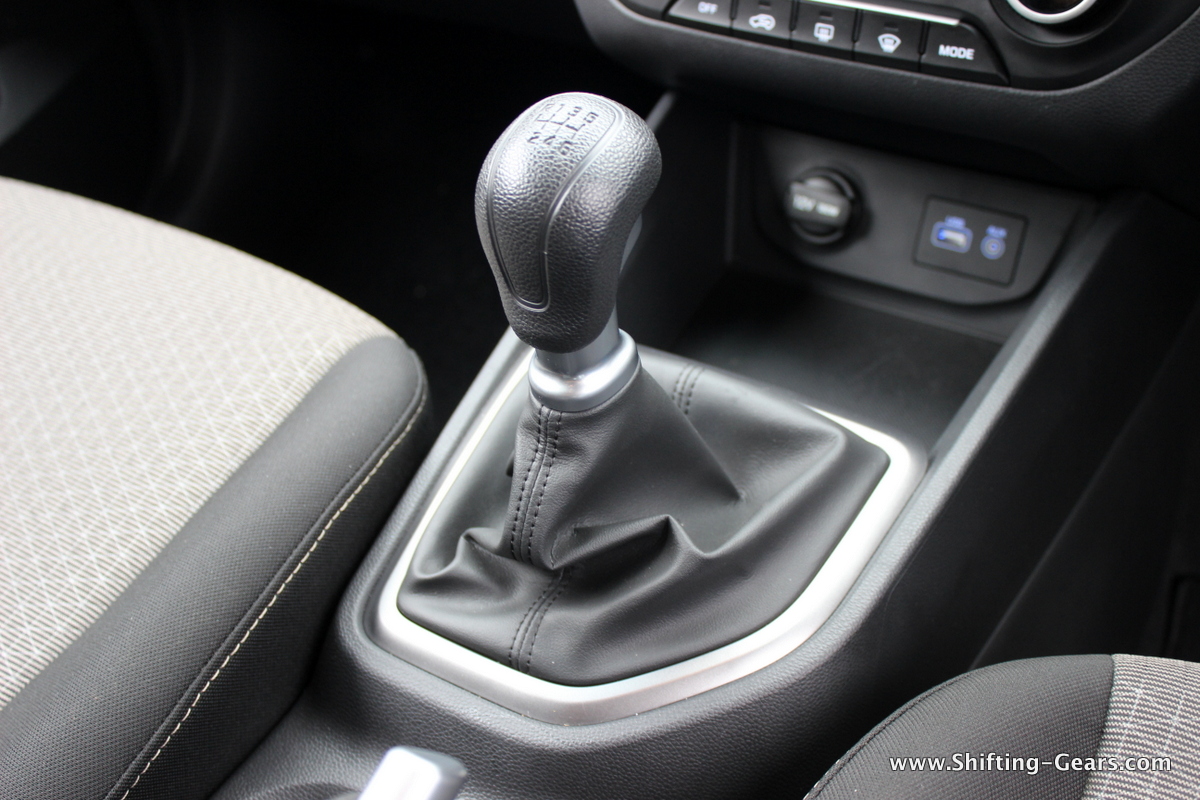 Fire up the oil burner under the hood and the NVH levels are segment-best. The likes of Honda really need to buy a diesel Hyundai product and learn a thing or two about NVH. The engines are super refined, and barely audible inside the cabin. The clatter is audible only during a cold start in the morning, but once the engine heats up, it’s as silent as the petrol. No vibrations felt, anywhere. Even when you revv the engine hard, it sounds almost like a petrol motor.

Lift the clutch & the Creta has ample torque to get moving. In stop & go traffic, just releasing the clutch will take care of the crawling requirements. However, the 1.6L motor does have noticeable turbo-lag & you have to press the pedal to move out quickly. It’s only beyond 1,800 that the turbo starts responding with speedometer climbing swiftly. It is best to keep the engine on the boil, or almost on the verge of it while driving in the city. The turbo-lag does take away a few points from the engine tractability department. Light clutch with less travel on a diesel motor is again typical of Hyundai’s and will be appreciated by potential customers. The pedals feel very car-like, and not heavy as is the case with most SUVs out in the market. The light EPS steering wheel helps the driver to zip around within the city with ease. 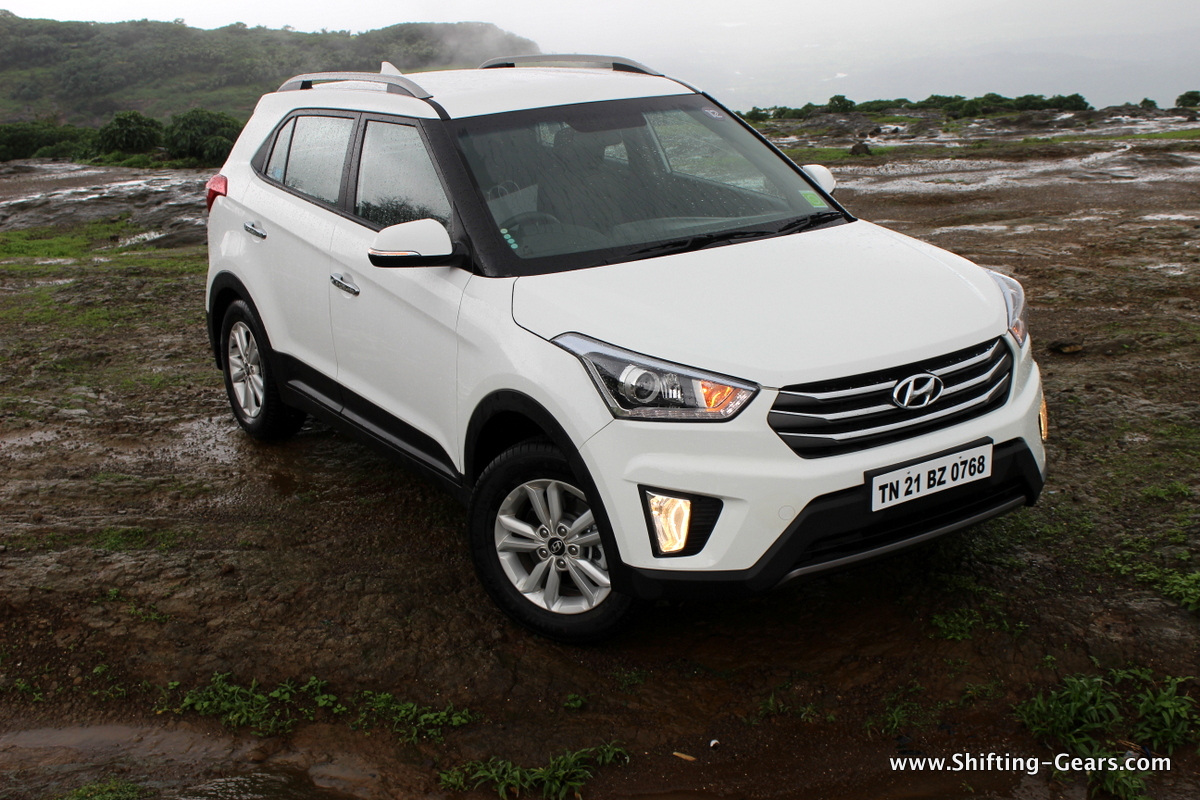 The 1.6L Creta diesel comes with not only a 6-speed manual gearbox, but also a 6-speed automatic, which is a segment-first. The manual gearbox is easy to use with slick gearshift quality & well defined gates. The 6-speed autobox on the other hand is still far away from the likes of the Volkswagen DSG. Although shift quality is seamless, it takes almost a second for the gearbox to respond. When pushed hard, this is clearly evident when the engine RPM stays in place before it drops when the cogs have changed. We’re glad though that Hyundai got a 6-speed unit & not decided to continue with the 4-speed autobox from the Verna. Using the tiptronic mode is fun, for times when you wish to intervene. The electronics do intervene in ideal gear shifts and prevent you from upshifting early or downshifting too hot.

Hit the highway, gun the Creta diesel, and all the horsepower will all the torque combined does offer decent punch. Climbing and maintaining triple digit speeds is fairly easy & the cabin remains quiet too. At 100 kmph, the RPM needle hovers around 2,000 in top gear. The engine in manual mode does pull all the way up to 5,000 RPM, but there’s no point doing this. Beyond 3,000 RPM, the engine noise is fairly audible and power delivery tapers off soon. It is best to upshift around or below 3,000 RPM when driving sedately. Stay in the power band and there will be no complaints. But if the RPM drops below 2,000 RPM, you will have to downshift. Unless you are really patient & can forgive the turbo-lag, everytime. The talking point for the diesel Creta will be the refinement.

Move to the twisties & unlike the petrol, the diesel Creta has ample torque to maintain the flow. Although turbo-lag can catch you at times, things are better than the petrol motor for sure.

Most enthusiasts still do not consider Hyundai’s as drivers cars. Well, we would like to ask most of these who rant about super soft suspension what car do they drive, and on which race track? Because aam junta clearly doesn’t care about this and it shows in the sales numbers Hyundai is managing. Not that the suspension setup & handling department is still flawed. Since the Grand i10, Hyundai has really upped their game when it comes to the dynamics department. Ride quality on the Creta is good and the SUV tackles bad patches really well. The suspension setup soaks up the bumps but large potholes do allow some thuds to be heard inside. High speed stability is also probably the best by Hyundai standards and the suspension stays planted even while encountering undulations at triple digit speeds. There minimum vertical movement felt, which was a sore point on Hyundai’s in the past. The Duster is still the benchmark in this department. Overall, the occupants stay at ease, for most of your driving requirements. With 190mm of ground clearance, we did not worry while driving over broken roads. But with 5 on board, the rear end of the car squats down noticeably and there is a chance of scraping the bottom over speed bumps. 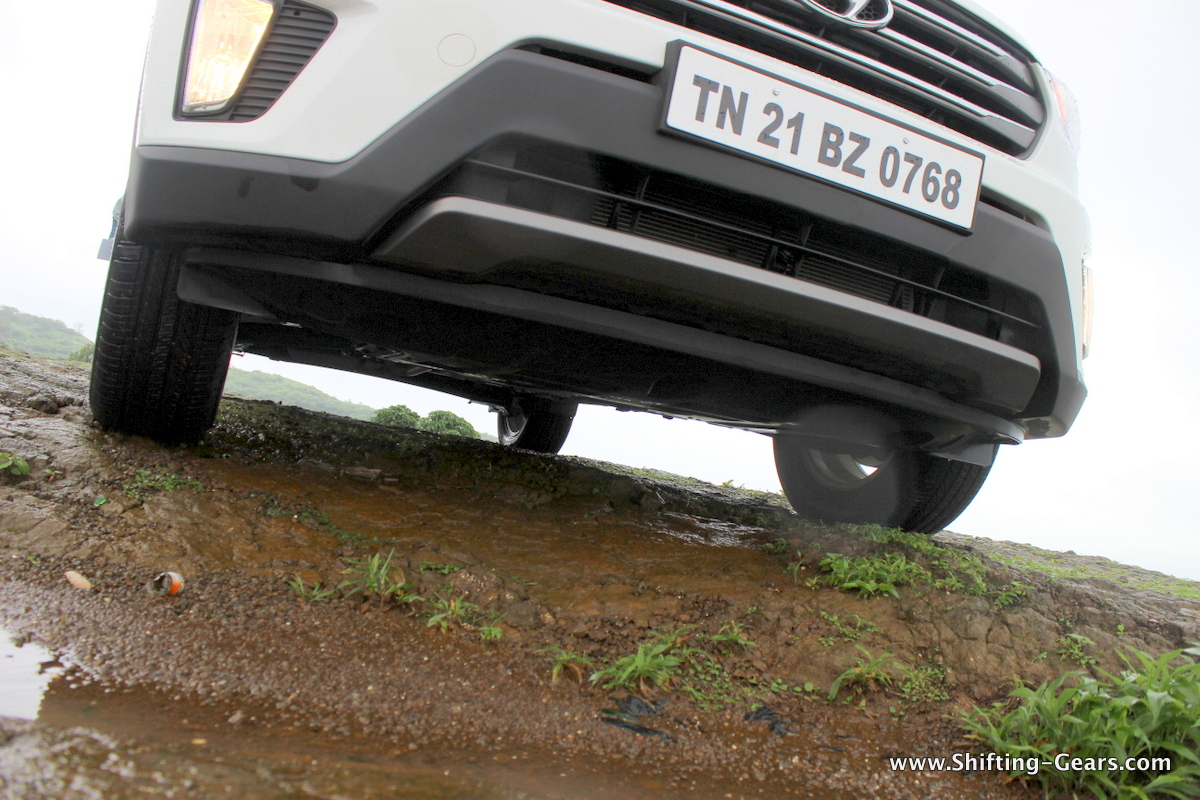 Steering feedback from the EPS unit has improved (by Hyundai standards). It is light within the city & does weigh up adequately on the highways. It feels direct & even in the centre, it does not feel as vague as other Hyundai’s do. With a height of 1,630mm, the Creta is a tall product and there is a decent amount of body roll felt when pushing really hard. However, with improved dynamics thanks to the better steering and suspension, you can negate the body roll easily. You can push the car into a corner without thinking twice. It is almost car-like to drive around.

We wish Hyundai does consider offering 4×4 / AWD as an option in the long run to fend off the Renault Duster completely. Till then, the Creta remains as a strict soft-roader.

Braking performance comes from disc brakes at the front and drum brakes are the rear. Although this is adequate, missing rear disc brakes are a glaring omission at this price. Hyundai has taken this feature out from the new Verna & i20 as well while the previous generation models had it. Under hard braking, the Creta has some amount of nose dive, but it stops in a straight line. ABS does kick in, but the shuddering is not felt prominently on the brake pedal. Seat belt pretensioners work well and occupants would remain safe under panic braking. Bridgestone tyres offered as stock have enough grip for the on wet as well as dry roads. We did push the Creta a bit harder than planned, but the tyres did not squeal even once. 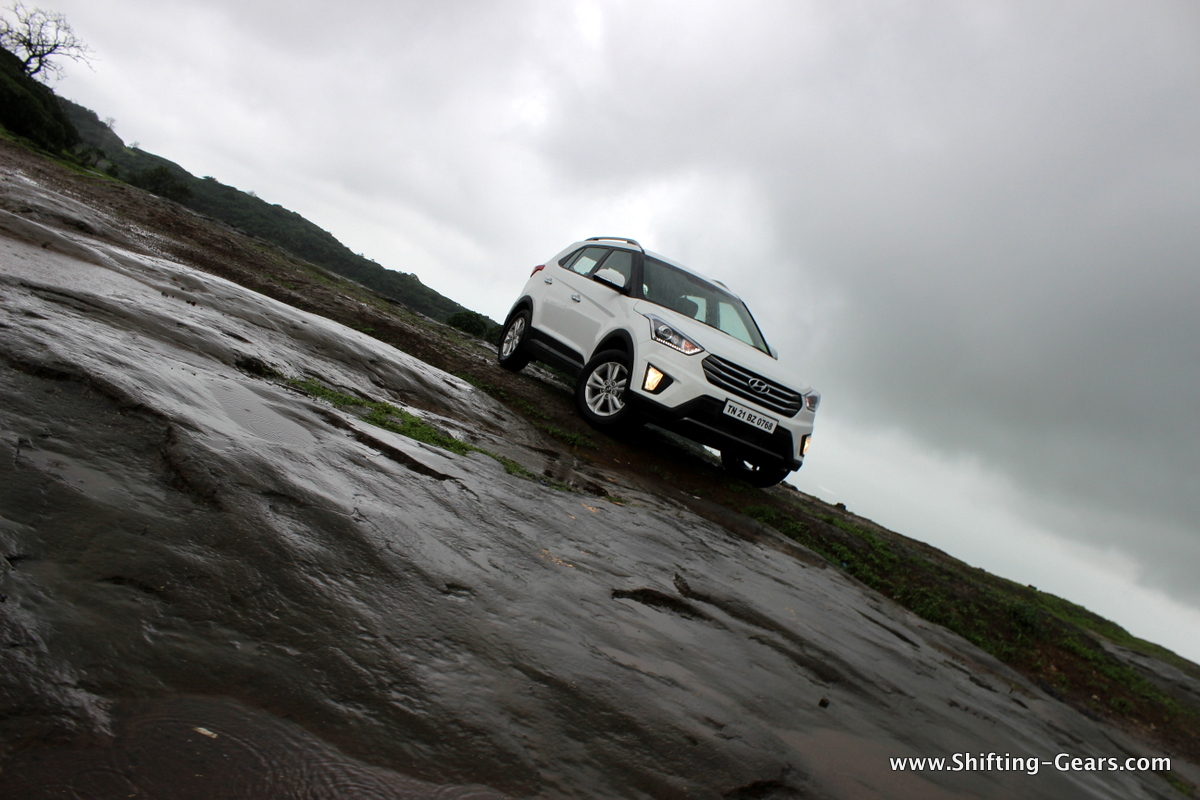 While the sales numbers are giving out the verdict themselves, we would like to add that the Creta is a very good option for those who want the looks of an SUV but want car-like dynamics. It does look big from the outside & the stance is felt everytime you get off the vehicle, which is a bit tall. But once inside & used to the cabin, it feels almost like a premium XL-sized hatchback / sedan & not a truck-like utility vehicle. Even before registering a month into the market, Hyundai has managed to get the Creta in the top 10 selling models in July 2015. Although some features have been missed, the Fluidic Sculpture 2.0 styling is sure to attract buyers to the showooms & tick most of their boxes. Do we think it is overpriced? Well, a little. But does it offer segment best quality inside-out – DEFINITELY!

Click here to check out the Hyundai Creta photo gallery.