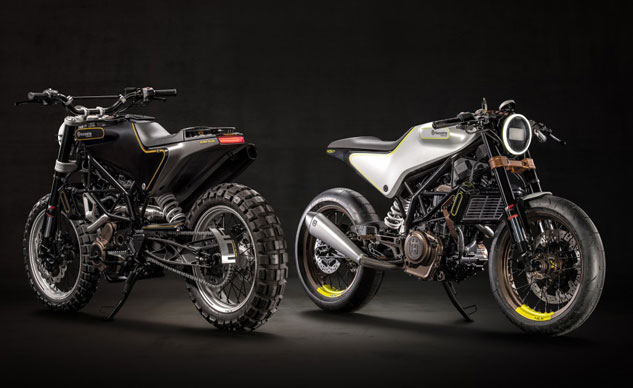 Bajaj had confirmed the launch of two motorcycles, the Husqvarna Svartpilen 401 and the Vitpilen 401 in India by the end of 2019. The bikes were also spotted testing on Indian soil recently indicating that Bajaj intends to launch the motorcycles in November this year, as per new information. The Swedish brand was acquired by KTM in 2013 and both the bikes are likely to be sold through the KTM dealerships.

The KTM dealerships which currently run on the bright orange KTM theme will have to accommodate the Husqvarna brand and will mostly be done in a side by side approach. The dealerships will have to accommodate new signage and are expected to expand their floor for the new brand. It is to be noted that the Husqvarna bikes under the skin are sharing nearly components with the KTM bikes already sold in India.

The Husqvarna Svartpilen 401 and the Vitpilen 401 share the mechanical components with the KTM 390 Duke. The Svartpilen is a Scrambler and Vitpilen is a Cafe Racer and features a neo-retro design with spoked rims, a round headlight, a flat seat along with modern upside down fork, powerful disc brakes on both ends and more. Both the bikes are expected to be powered by the KTM 390 Duke engine which is a 373.2cc, single-cylinder, four valves, DOHC motor producing 43.5 BHP of power @ 9000 RPM and 37 Nm of torque @ 7000 RPM mated to a 6-speed gearbox with Bosch engine management system and a slipper assist clutch. Internationally, Husqvarna is likely to offer the model in an automatic clutch option. It is expected that this engine will be tuned differently via the EMS for a different characteristic.

The chassis is a powder-coated steel trellis and the suspension hardware will be similar to the KTM 390 Duke with a WP 43mm upside down front fork and a multi-step adjustable WP mono-shock with preload on the rear. Brakes are expected to be hydraulically operated 320mm disc with a four-piston radially mounted caliper on the front and a 230mm disc with a single-piston floating caliper on the rear with dual-channel disengageable ABS.

For the Indian market, the bike will be added with grab rails and a saree guard as per mandate and was seen testing with the grab rails recently in camouflage. The production model will be priced at a premium and is expected to be slightly expensive than the current KTM 390 Duke which is priced at INR 2.48 lakh ex-showroom, Delhi.

Both the bikes will be locally manufactured to keep the costs in check.

There have been numerous reports of the Husqvarna Svartpilen 401 and Vitpilen 401 hitting the market in the past, however, things have been getting delayed time and again. Also, with new bikes from almost every manufacturer in the premium <500cc segment, it remains to be seen how Husqvarna tries to differentiate itself, primarily from KTM siblings.