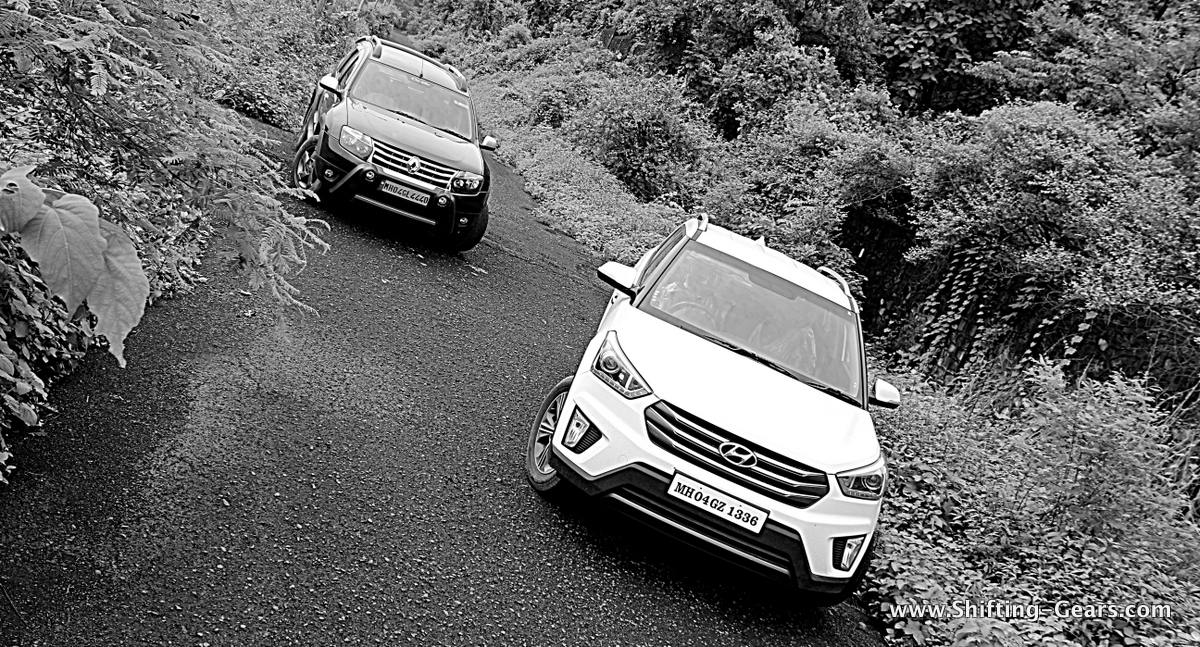 So, this is quite a common question out there in the new car market at the moment – ”Should I buy the Hyundai Creta or the Renault Duster?”

Well, let’s help you out in this quick, but decisive comparison.

Firstly, we’ve reviewed both the Creta & the Duster in detail: Hyundai Creta Review | Renault Duster Review. This comparison story will only highlight stuff which could help your buying decision. 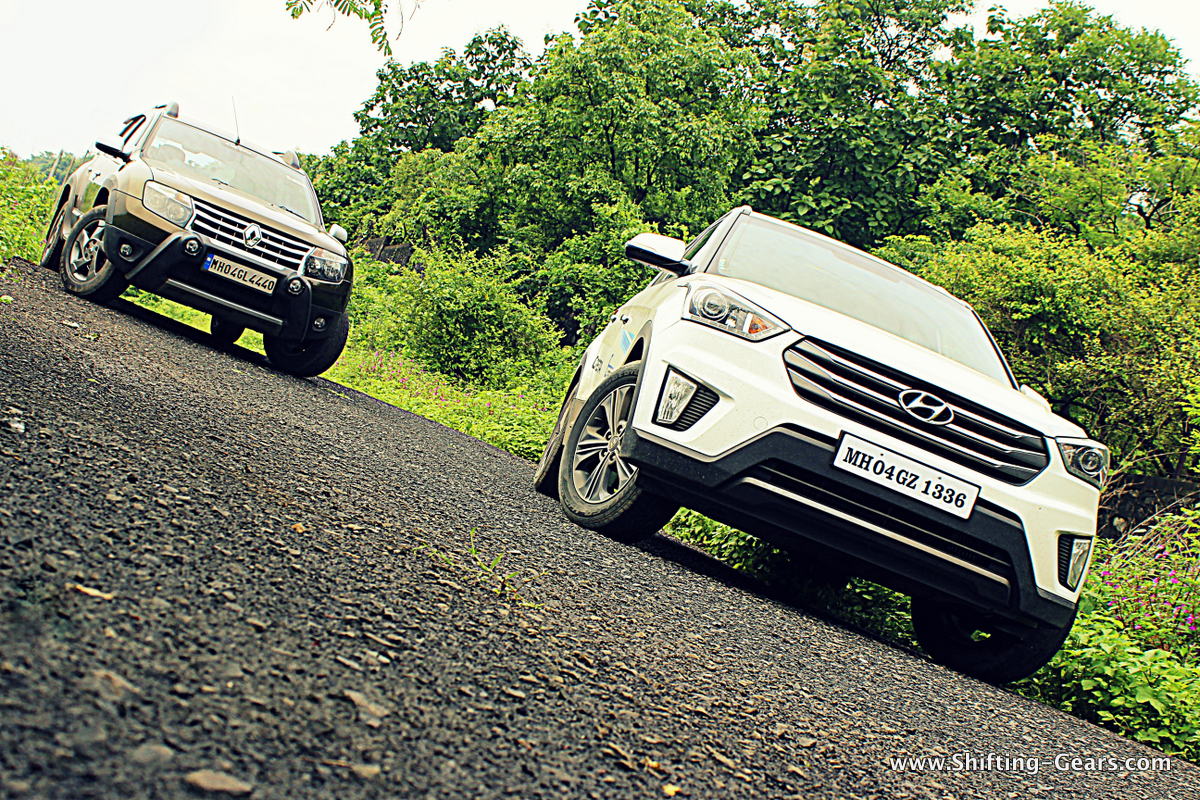 So, the Renault Duster has been a very popular product in the compact (not sub-4 metre) SUV segment for a long time. Not because it was something extraordinary, but because it enjoyed the first mover advantage. It was the Duster which kicked off this budget, monocoque, compact-SUV space here in India. But now, the demand has been decreasing month-on-month, and with the arrival of the Creta, things look a bit hazy for the Duster. With 8,424 units dispatched in July 2015, Hyundai has recorded the best ever sales performance by an SUV in the first month itself in the Indian automotive history. With this, Hyundai beats the likes of Renault Duster, Nissan Terrano, Ford EcoSport, Mahindra Bolero & Mahindra XUV5OO in the first month itself. Hyundai has already ramped up the production capacity for the Creta to bring down the long waiting period which is around 10 months at the moment. On the other hand, Renault recorded a 6 month low of 1,005 units for the Duster & you know why…

Exterior:
When you look at both the cars parked side-by-side, it’s two different stories altogether. The Renault Duster has a typical SUV stance and it does squat nicely. The new Creta on the other hand looks more car-like & slightly tall-boyish.

At the front, both cars get a heavy dose of chrome in the grille section, but the hexagonal layout on the Hyundai is trying a little hard to please than the Renault. Also, Hyundai offers projector headlamps with LED DRLs which do stand out while looking at both these SUVs head-on. 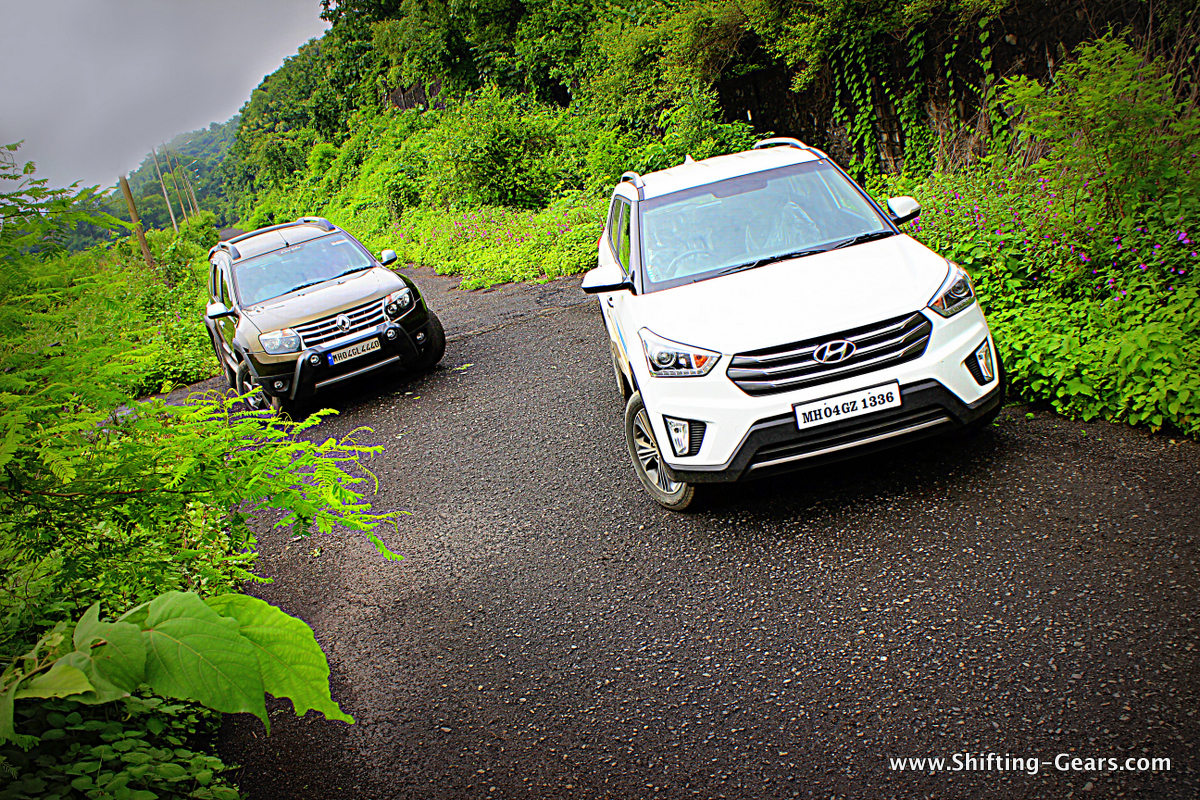 Side profile of the Creta is cleaner compared to the Duster. It just gets a couple of bold crease lines & mild plastic cladding. The Duster on the other hand tries hard to pose like an SUV with the flared wheel arches. The Duster lacks appeal because the sheet metal does look dull & boring. Unless you consider the adventure or AWD variant which gets body cladding or decals respectively.

At the back, it’s the Creta which is a little quirky to look at. May be because of the chrome garnish placed over the number place housing which feels a little out of place. But after spending a couple of days with the car, we made peace with it and it doesn’t really look odd anymore. The Duster continues with the bare bones design even at the back, with a small tail lamp unit.

To each his own, but the Creta looks like a far more better finished product on the outside. It is sharp with fine crease lines all around the body while the Duster gets curves all around. Age does show on the Duster, and the Creta will suit the needs of a 2015 customer better in the looks department. 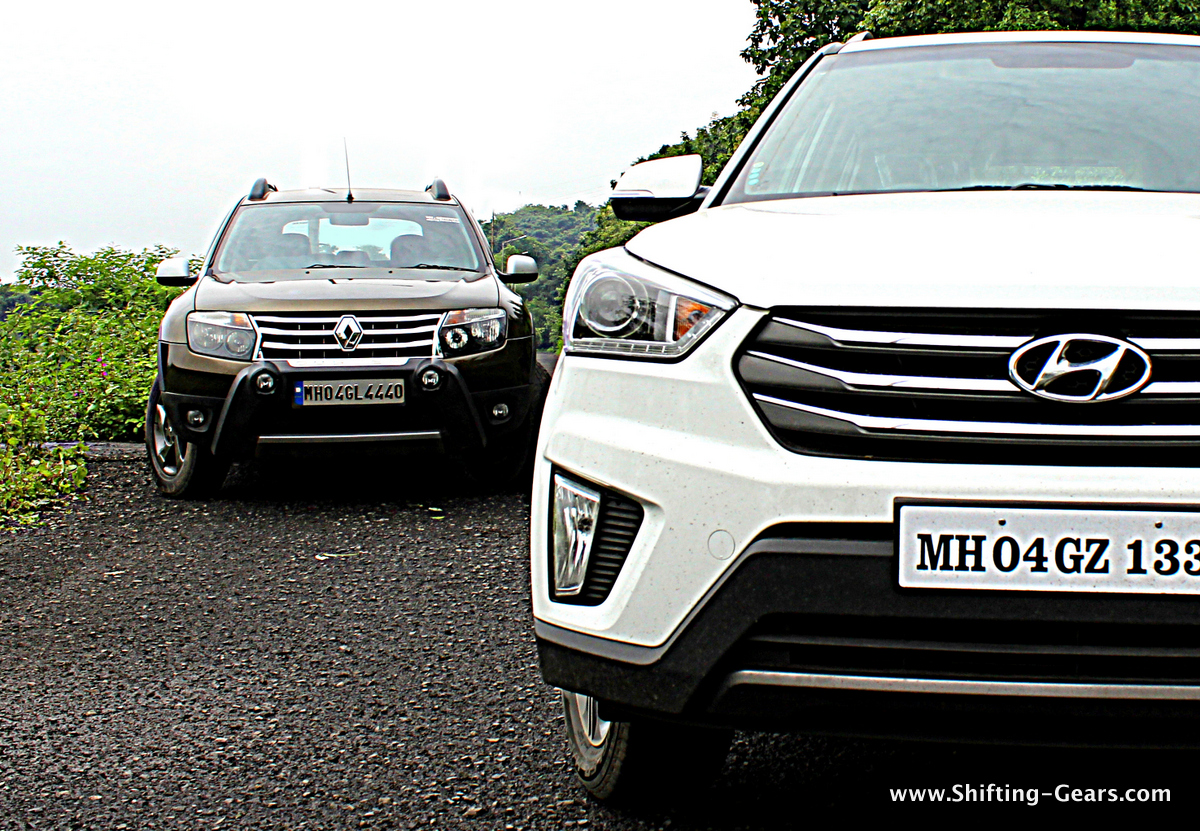 Interior:
On the inside, the Hyundai Creta literally hammers the Renault Duster & almost every other product in the segment. Fit & finish, quality, touch & feel is phenomenal on the Hyundai. The Duster on the other hand feels cheap on the inside with the quality of plastic not really being up to the mark. Yes, Renault has updated the Duster over the years, but the Creta just sets a benchmark which other manufacturers now have to catch up to.

The dashboard on the Creta looks very premium compared to the Duster. The steering, instrument panel, stereo system, switches, etc. is a notch above in the Creta. The Duster just feels like a generation older, and cheaper. Also, ergonomics in the Renault are really messed up. One will feel at home in the Creta almost instantly while the same person will have to spend some time to familiarize in the Duster. 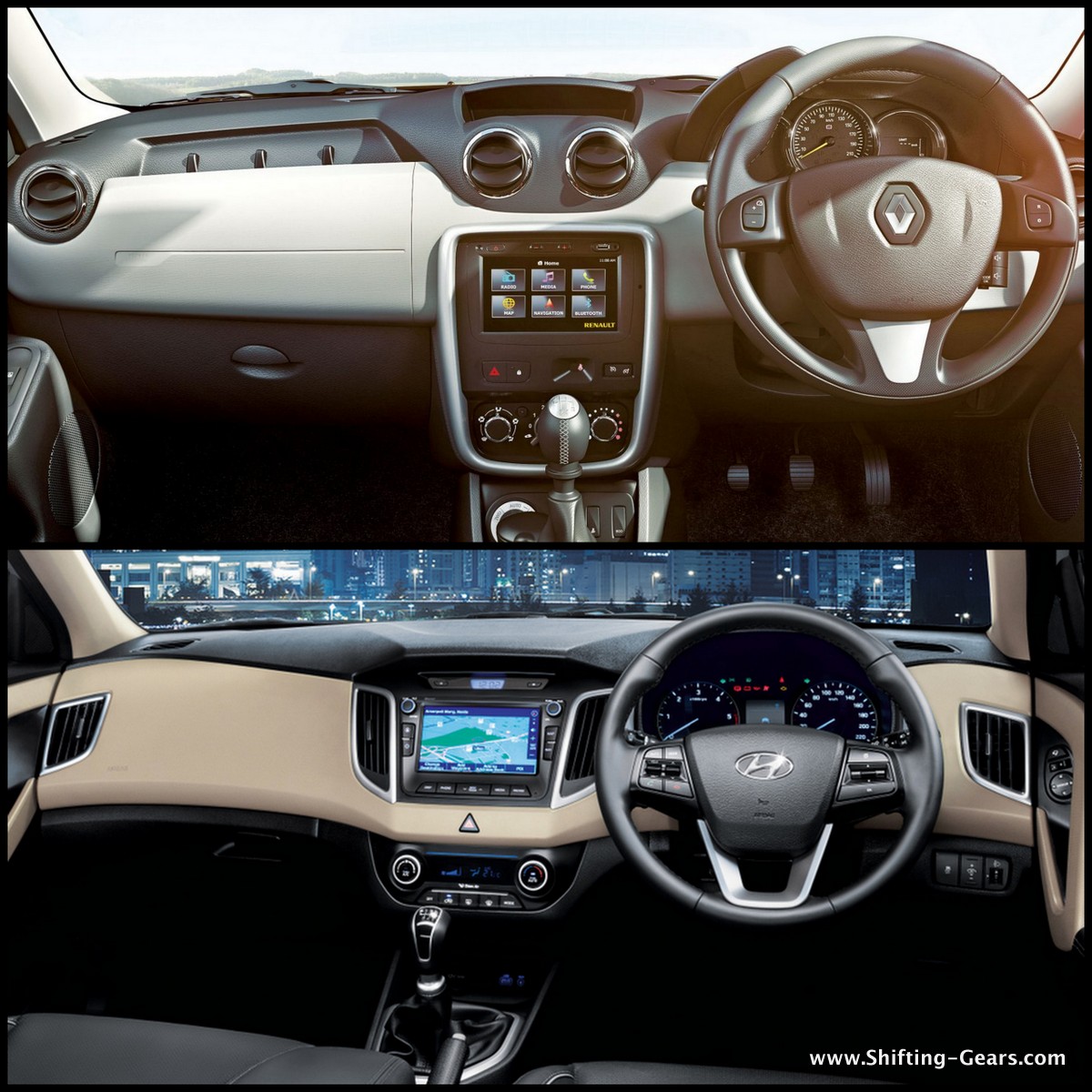 Try yourself! Hop inside a Duster first & then the Creta; very few would feel like getting inside the Duster again.

For example, try the control stalks (Headlamp & Wiper) on both the cars. The ones on the Creta feel of superior quality & touch & feel is brilliant. The Duster on the other hand feels crude & using the high / low beam function makes an annoying click sound. Features such as automatic climate control missing on the Duster is a glaring omission. What the Duster has better on the inside is a more informative MID. It’s inexplicable why Hyundai has not been offering a detailed MID on their new models which competitors are offering it in segments below.

Both the cars are 5-seater SUVs with the Duster offering an optional jump seat in the boot, which is practically unusable. Both cars have supportive front seats & the driver stays in place even while driving enthusiastically. Surprisingly, the cabin space in the Creta felt a bit more even though it is the Duster which has a longer wheelbase. But still, the Duster has better cabin comfort. Also, the cabin in the Creta feels a little claustrophobic due to the high window sills in the 2nd row which limits the light coming in.

The Creta gets rear AC vents while Renault ditched their fan blower from the Duster sometime back. This will surely be noted by potential customers who wish to go out for long drives often. 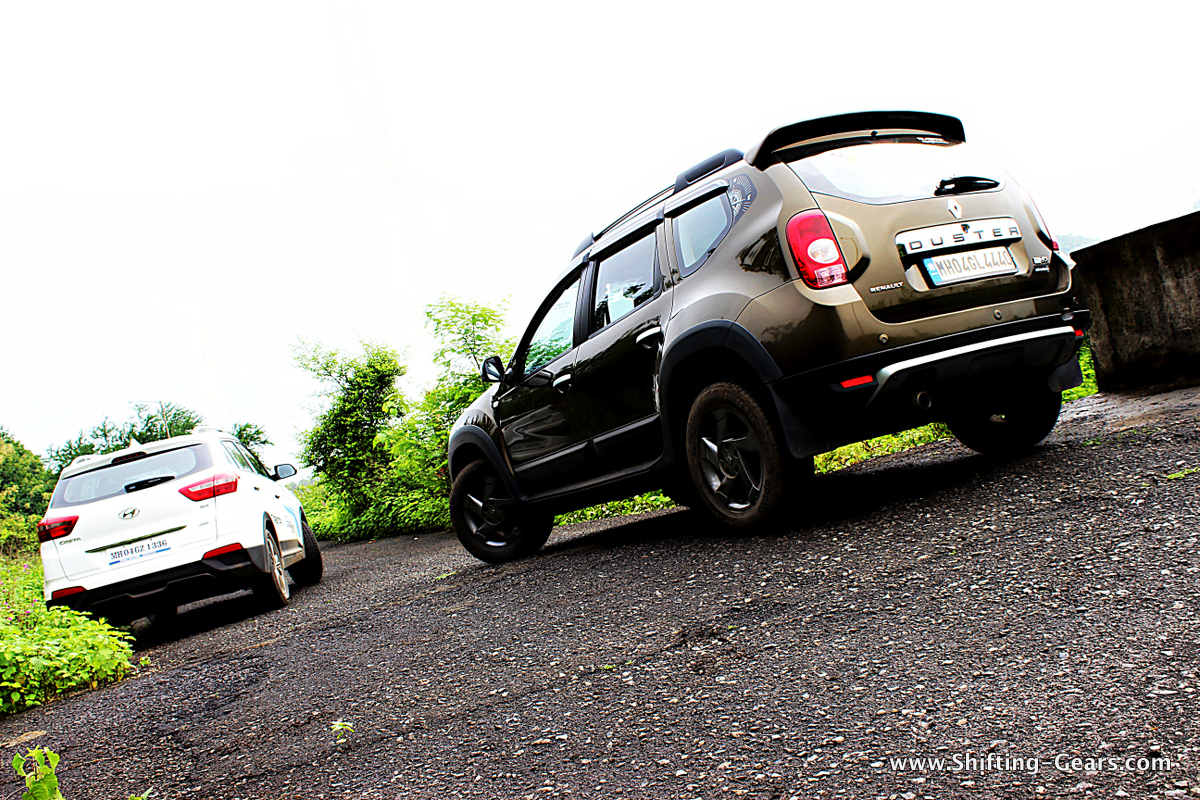 The Creta is not only more powerful, but even more efficient than the Duster in both petrol & diesel versions.

Fire up the engines on the Creta & refinement levels are best-in-class. Hyundai cars always have really good NVH & the Creta is no different. In comparison, the Duster’s engine does sound a bit gruff, in idle or in motion. Both the cars, in their diesel avatar, deliver power in a linear fashion. Both models in the higher tune however do suffer from some turbo-lag. But when in the ideal RPM range, the Creta revvs clean all the way to the redline without feeling strained while the Duster really makes you feel that it is being worked upon.

If you’re looking at simple city commuting primarily, then the Duster diesel in the 85 PS avatar is the most tractable in this lot. The engine has ample torque lower down the revv range to allow you to start off in 2nd gear from 0 kmph with ease.

Gearbox on the Creta is silky smooth with very well defined gear gates. Gear throws are also short coupled to a very light clutch. The Duster’s gearbox on the contrary feels very rubbery & even sounds a little notchy. The clutch & steering are also on the heavier side on the Renault. This makes the Creta very easy to drive around city traffic. 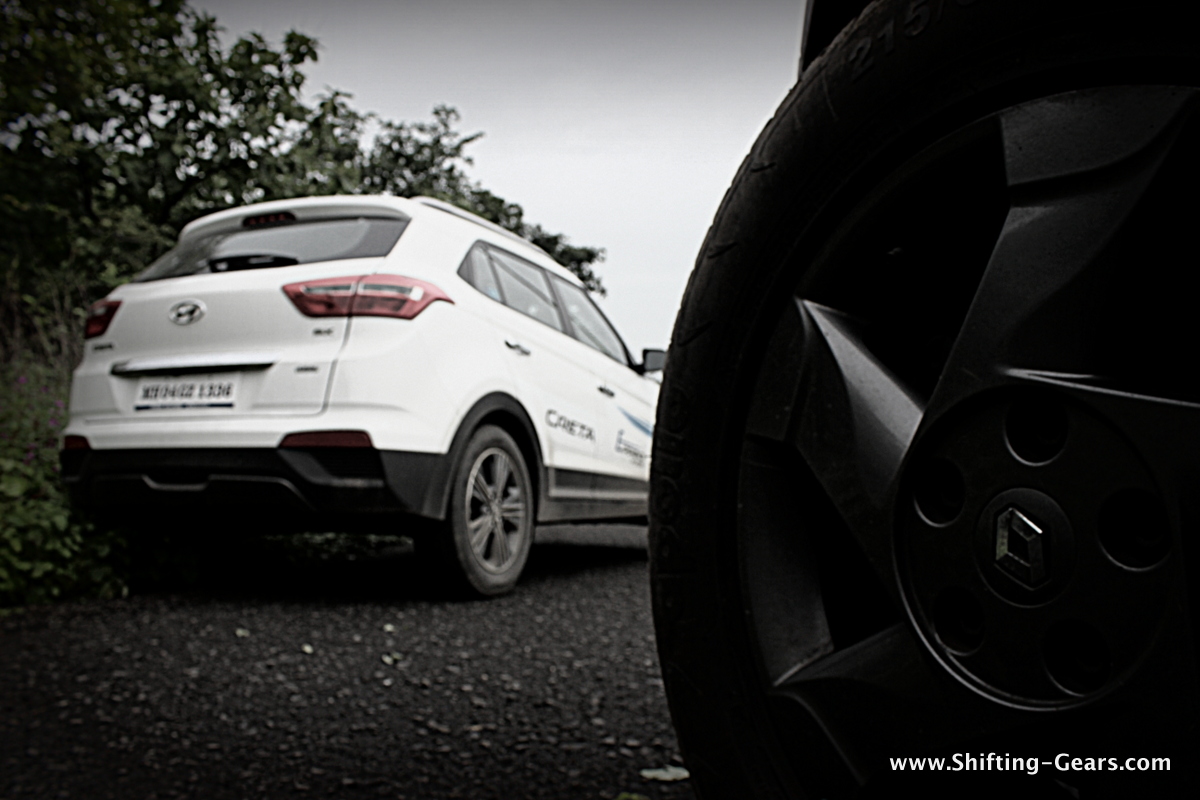 Ride & handling:
Expecting the Hyundai to be a total dud here? Well, not really. The current range of Hyundai models ever since the Grand i10 have had a sorted suspension setup. The Creta is a well balanced SUV & stays planted even at high speeds over undulated roads. City or highway, an average customer will be very happy with the Creta. The Duster on the other hand has a superior suspension setup. With the Duster, you can simply glide over broken roads without having to worry about jerks being sent in the cabin. The suspension of the Duster mutes the thuds better than the Creta. Stability of the squatting Duster is also a tad bit better in comparison, backed by a well weighted steering wheel. 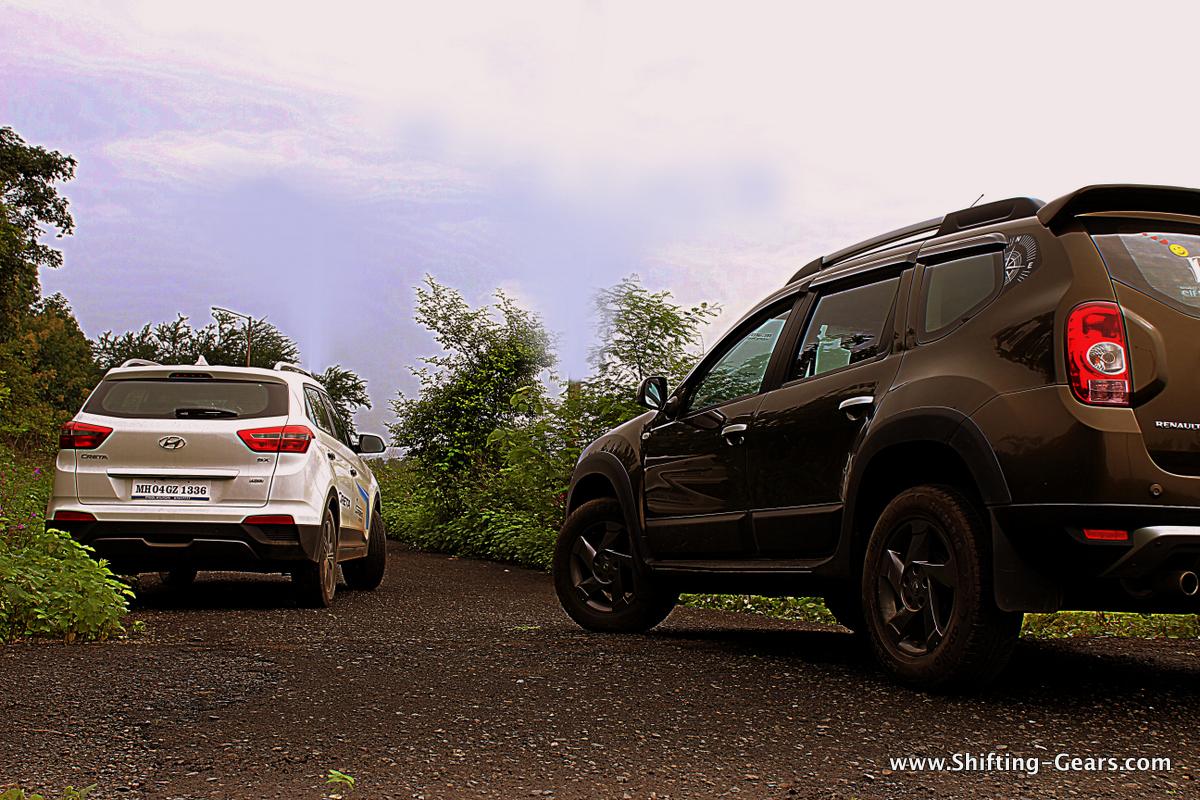 If you want a fully loaded SUV, there is no doubt that the Creta is a clear winner. The Duster now struggles to justify its price tag with poor quality of parts & lesser features compared to the Creta. It’s just hard to ignore now. Just marginally better driving dynamics cannot make up for lesser equipment for a car costing over a million rupees. Not to forget, the Duster is a budget product for a budget brand Dacia globally. Hyundai however has built the Creta as a premium offering in the segment, and it shows.

Hyundai’s service network is also far more accessible compared to Renault which is still evolving in the Indian market. If you’re confused between these two cars, we recommend, try the Duster first & then the Creta… The decision will be easy.

Thanks to Modi Hyundai for arranging the vehicles for a quick comparo.