Flipkart announces its commitment towards e-mobility by setting up a target to deploy more than 25,000 electric vehicles by 2030 under its logistic fleet. This announcement is in tune with the company’s recent initiative to help develop homegrown innovation and the e-commerce marketplace. The company has already made partnerships with key players in the electric vehicle market having the likes of Hero Electric, Mahindra Electric and Piaggio. Recently, Amazon also made a similar announcement about its commitment to e-mobility.

Flipkart is already operating electric 2-wheelers and 3-wheelers in some selected cities like Delhi, Bengaluru, Hyderabad, Kolkata, Guwahati and Pune, though the number will expand exponentially in the near future. Flipkart says that it is also planning to add electric 4-wheelers to its fleet which will enable the movement of higher quantities of packages. The Indian e-commerce company will accomplish the first and last-mile deliveries using these electric vehicles across the country and help reduce the carbon footprint. Flipkart will also conduct various awareness programs which will encourage more people to join the e-mobility movement. As per plans, Flipkart will also install charging infrastructure near its 1,400 supply chain facilities.

Hero Electric will play a vital role in providing some of the most affordable and efficient products to Flipkart’s logistic partners. Under the ‘No Emission’ mission, Hero Electric perfectly resonates with Flipkart’s go green ideology. The Nyx series is the perfect electric vehicle two-wheeler to accomplish last-mile deliveries. This electric scooter claims to have a range of 150 km per charge which is already in use, making thousands of deliveries across Bhubaneswar, Guwahati and Kolkata. Mahindra Electric will provide its ever-popular Treo Zor to Flipkart. Mahindra claims that this three-wheeler electric vehicle has the best in the industry power of 8kW and with the highest-in-class payload capacity of 550kg. Treo Zor is the perfect candidate to replace the traditional diesel-powered cargo three-wheelers which are known to be the major contributor to air pollution. Ape’ EXtra FX from Piaggio is another three-wheeler electric vehicle that does the duties under Flipkart’s electric logistic fleet. With more than 30 lakh customers Piaggio is synonymous with reliability and customer experience and Flipkart will try leverage from this. 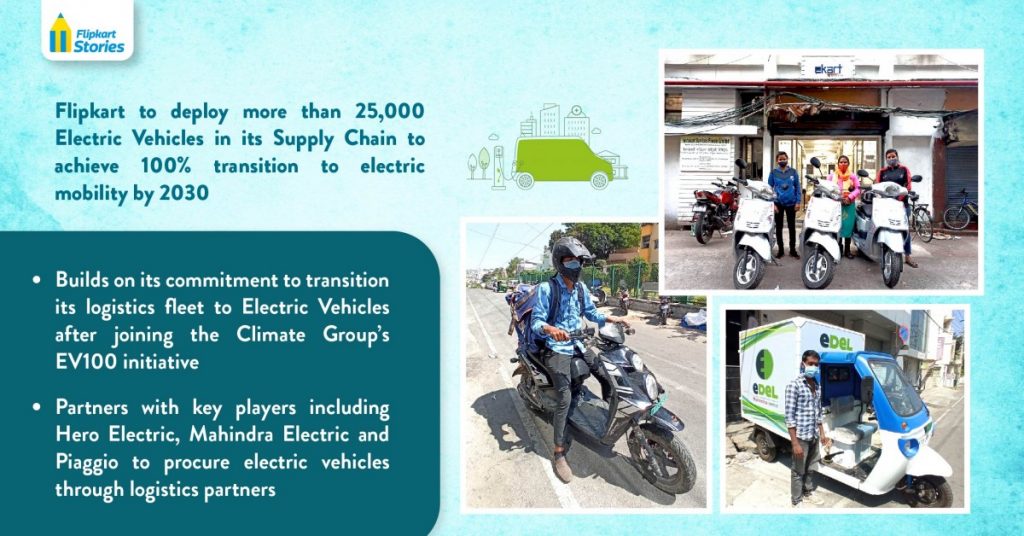