Home » Fine of INR 5,500 for cars without HSRP and colour-coded stickers 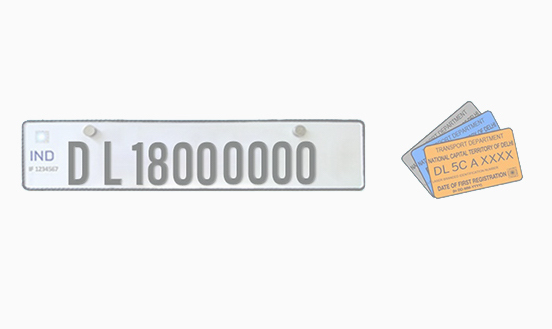 In a recent notification released by the Delhi Transport Department, they announced that vehicles running without HSRP (High-Security Registration Plate) and colour-coded stickers will be applicable to be fined up to INR 10,000 which is compoundable up to INR 5,500.

All the offenders are liable to face prosecution under the amended Motor Vehicle Act. Currently, the operation is laid down across 9 out of 11 districts and each team has been advised to take strict action against the violators. For the ones who have applied for the HSRP plate but did not receive it will have to show the slip of application as the proof. Also, vehicles which are registered under other states outside Delhi are exempted from this. The notification is in tune with the notice issued by the Ministry of Road Transport and Highways (MoRTH) that directed all the vehicles in India sold before 1 April 2019 to have High-Security Registration Plate and colour coded stickers affixed.

These plates are made up of aluminium and fixed on to the vehicles using two non-reusable locks. Upon precise scrutinization, one can find the Ashoka Chakra on the top left and on the bottom left a 10-digit PIN is laser-engraved on the reflective sheet. The main advantage of these registration plates is that these cannot be easily tampered as compared to the old number plates, which could be very easily manipulated. More often or not it was found out that vehicles used in illegal activities had stolen or tampered number plates affixed which made it really difficult to catch and track the culprits. Another important feature of these number plates is that the font style used is uniform across all the vehicles which makes it easier for the traffic police controllers and cameras to keep track of them. In fact, the MoRTH is constantly spreading the awareness of installing the HSRP plates on social media channels as well.

The colour-coded stickers help identify the fuel used in the car. Like, the vehicles running on petrol or CNG will have light-blue coloured stickers meanwhile the diesel vehicles will get the orange-coloured stickers. The other details mentioned on the sticker include the registration number, a laser branded pin, the engine and the chassis number.