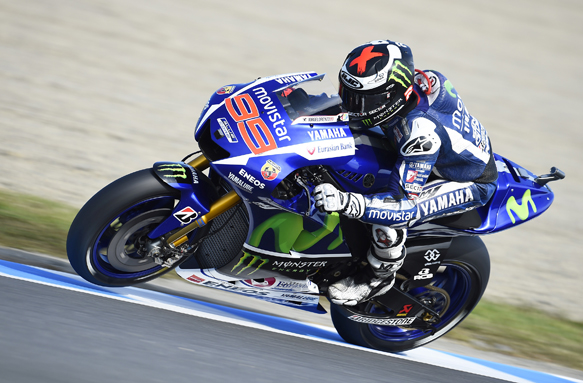 On the following events to the final action of MotoGp 2015, at the qualifying race, Jorge Lorenzo grabbed the pole position leading himself to start the final race of GP planned to held at Valencia,Spain. With his skills, the star Yamaha rider Jorge broke the previously created records at the circuit by making himself the fastest man on the track.

Lorenzo had a record-breaking lap of 1 minute, 30.011 seconds at the Ricardo Tormo circuit outside of Valencia, 0.488 seconds ahead of Marc Marquez and 0.505 seconds in front of Dani Pedrosa.

Another star rider and the most controversial too, Valentino Rossi, who was just behind of Lorenzo with just 1.460 seconds, fell on turn 8 where his Yamaha R1-M lost control and fell drifting into the gravel. With the fall Rossi finished 12th in qualifying which won’t affect much as he has to already start at the last of the grid due to the penalty. Rossi wasn’t seriously hurt in this crash though.

While Marc Marquez from Honda Racing, finished third in the qualifying race, In order to win, Valentino needs to finish the race at least second to win the MotoGP 2015 championship.

Let the game decide who wins or looses, but, audience and fans are sure to get an exciting Sunday for themselves.