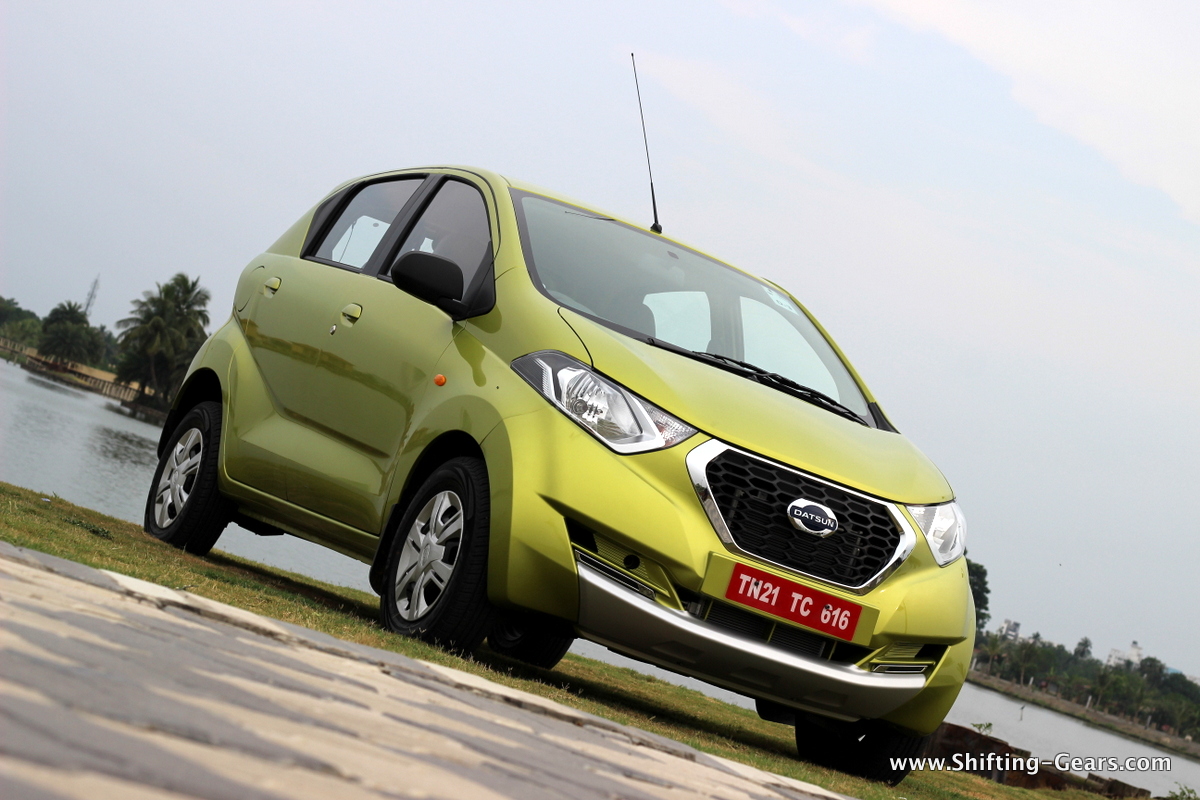 Datsun India entered the market three years ago. The models on sale here are the GO and the GO+. The GO is a basic simple no nonsense hatchback and the GO+ is the cheapest 7 seater vehicle in the country. The year they have come out with the Redi-Go. 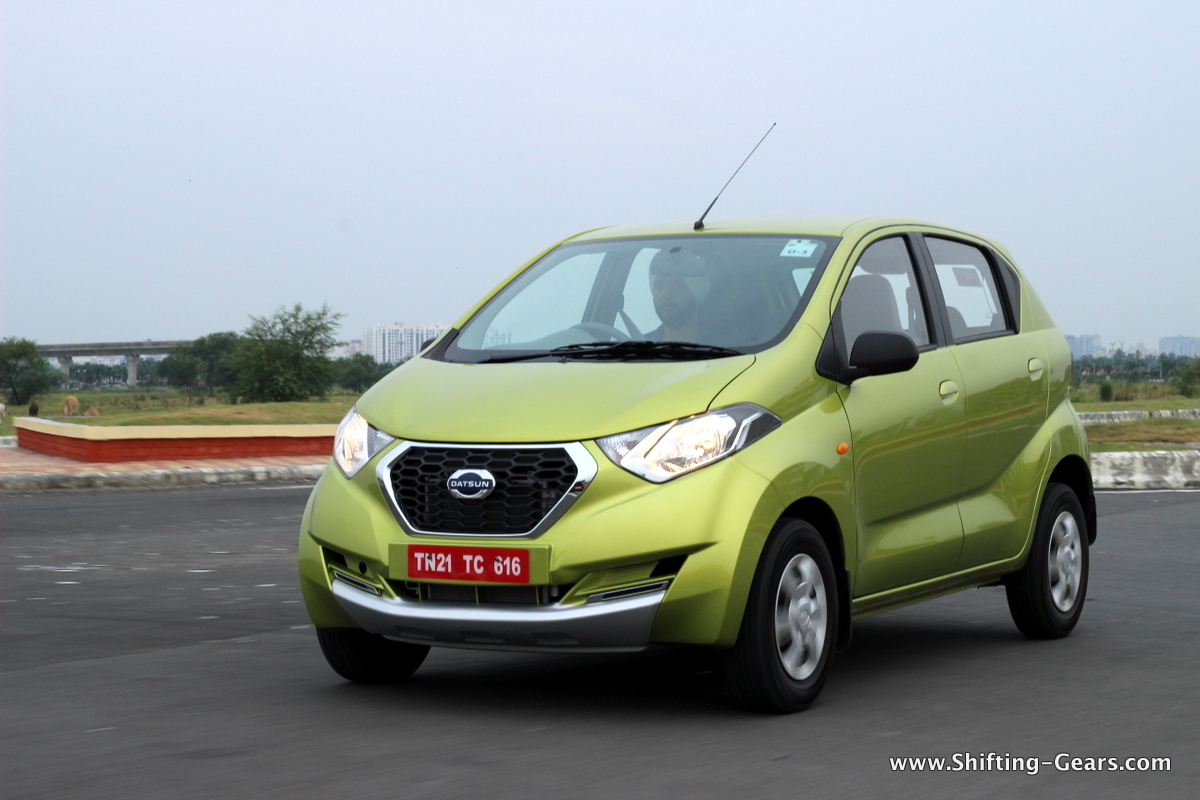 This car is built on the same platform as the Renault-Nissan CMF.  KWID by Renault, Datsun has aimed to target the A segment market. The company invited us to try out this new entry and we tested it to see if this could be a good competition to its siblings.

Exterior:
The Japanese call this car YUKAN which means Brave and Bold. Take a first look at the Redi-Go and you could clearly see the intention of the designers to keep the idea of this car as real as possible as their proposed concept. A combination of a crossover which is compact and at the same time, an urban hatchback. This has resulted in a very smart looking vehicle. The front end has an angular grill with a back swept headlamp. A pretty funky look. 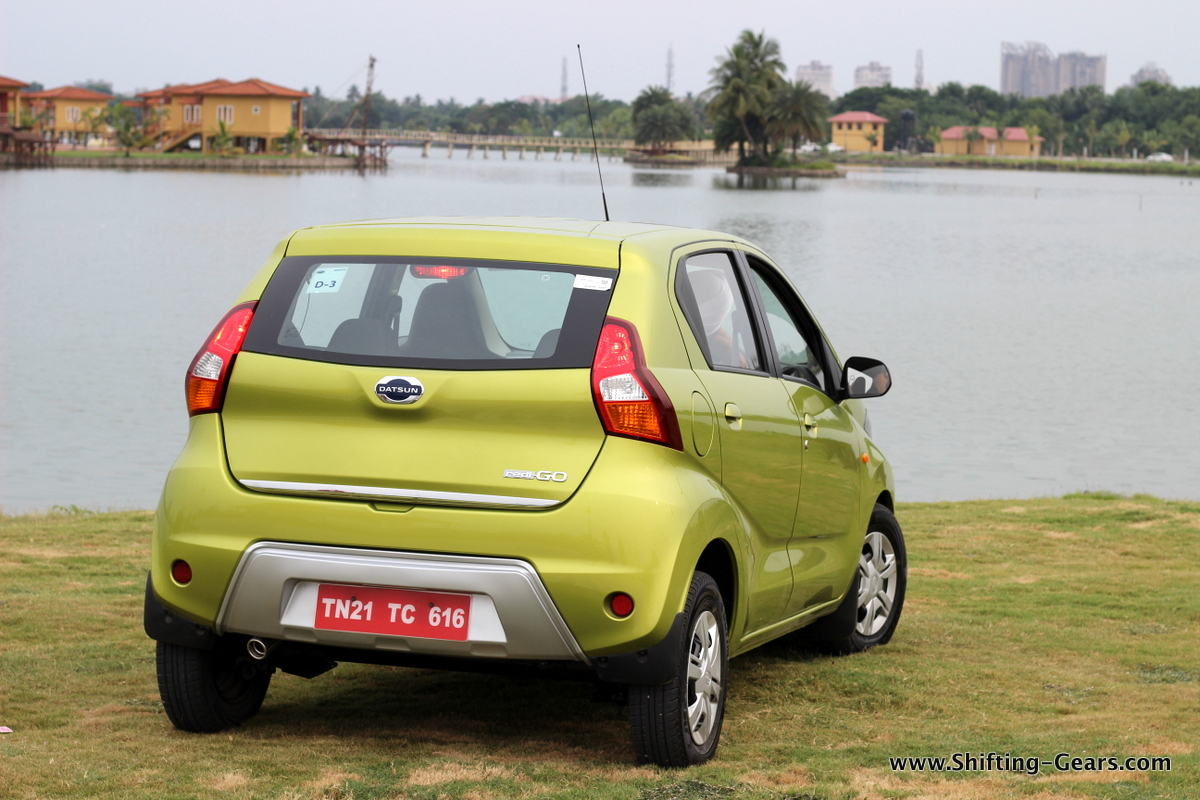 The car has a length of 1,541 mm and a ground clearance of 185 mm. This makes it the second tallest in its segment. The side facade of the car has a whole profile of sheet metal and the designers of this car have smartly merged 3 lines which give it a distinct visible angle. This helps in breaking the continuity of an entire large piece of a body part. The rear end of the car has a neat and fit design which makes this car look pretty modern overall.

Interior:
The Datsun Redi-Go’s interiors are similar to the Renault Kwid since both these cars are based on the same platform. Basically, both of them have more or less similar interiors. The Datsun will not get the touchscreen as the Kwid. The cabin size is similar but the boot is smaller. The console is analog and it has a three spoke steering wheel. 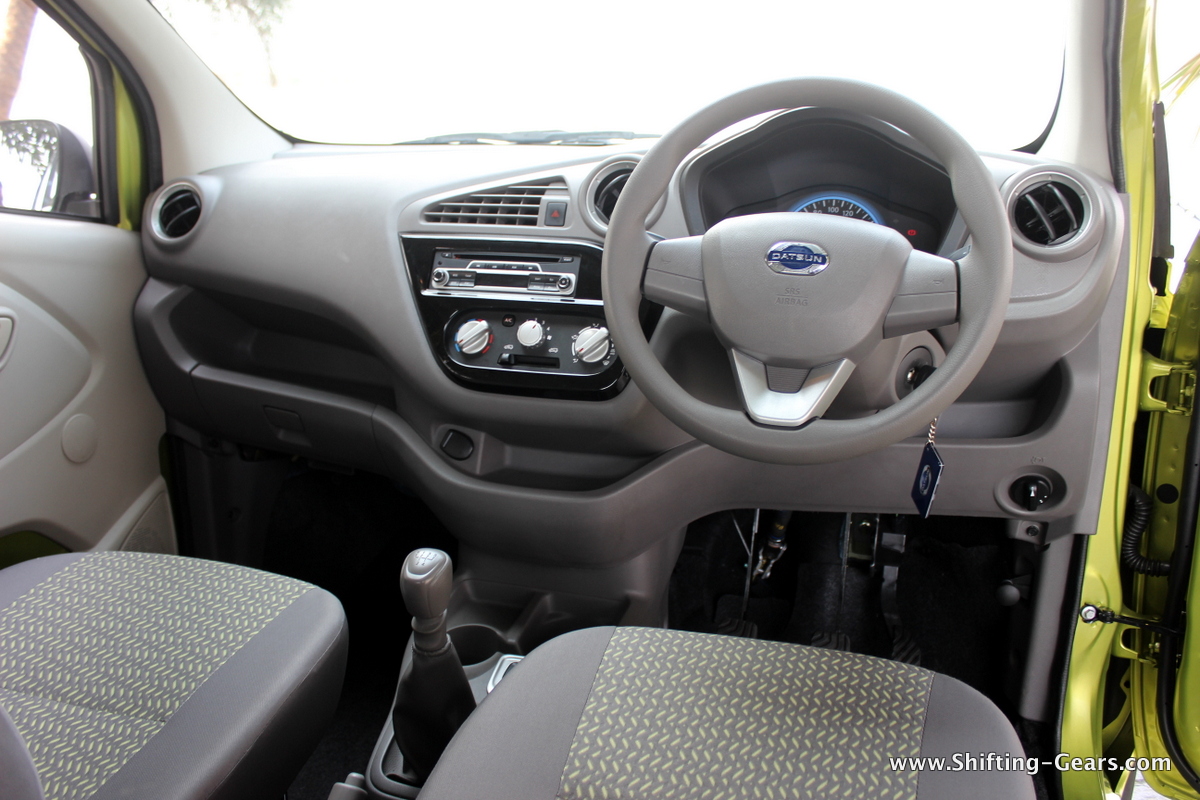 There is enough storage space on the dashboard, and floor console. The seating position of the Redi-Go is higher than the other cars in its segment and also higher than the Kwid. This is one of the key differentiating features in the car and it adds to better all-round visibility. The Redi-Go will be positioned more as a micro-compact-sized crossover with a footprint of the Renault Kwid.

The car has ample amount of storage on the dashboard and the floor console. The seating posture is higher than all the other cars in a segment because of which it has an advantage of all round visibility. It has grey color interiors with two different shapes for the AC vents at the centre. There is a circular one and other is triangular. There is an aftermarket music system. The instrument cluster has an analogue speedometer and a digital tachometer. There are two power windows at the front. Basically the Redi-Go is a micro-sized-compact crossover marked on the footprint of Kwid which has well designed Uber Cool styling which would certainly appeal to the younger masses. 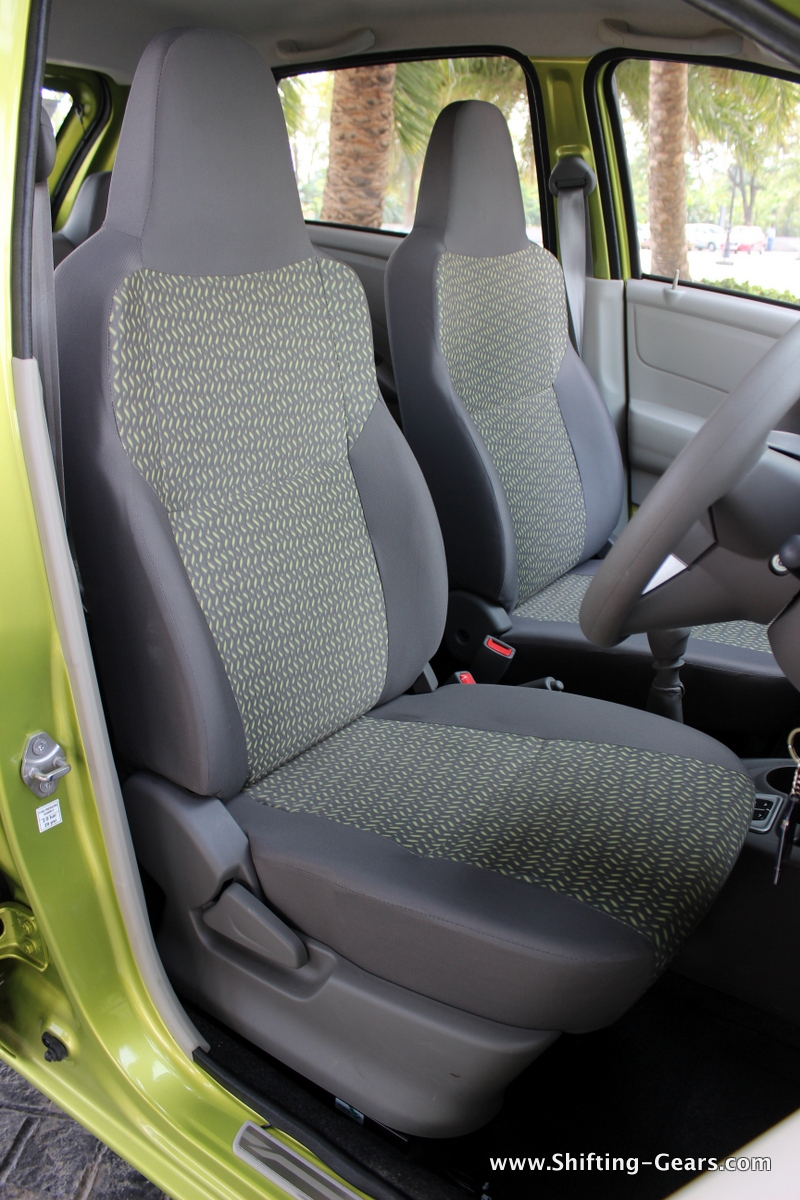 Engine, performance & handling:
The new car comes with a 3 cylinder petrol engine which displaces 800cc delivering 52 BHP of power and 72 Nm of torque. It has a 5-speed gearbox and currently the company does not plan to release any diesel engines. It also wouldn’t be getting the 1.0 litre petrol engine wouldn’t be launched with the AMT (automated manual transmission gearbox). Renault and Nissan will be increasing the capacity of their manufacturing plant in Chennai in March for the CMF-A platform so as to enable to keep up to the production line demands for both, the Kwid and Redi-Go. The engine is noisy at higher revs but overall it has the fastest 0-100 among all the models as claimed by Nissan. 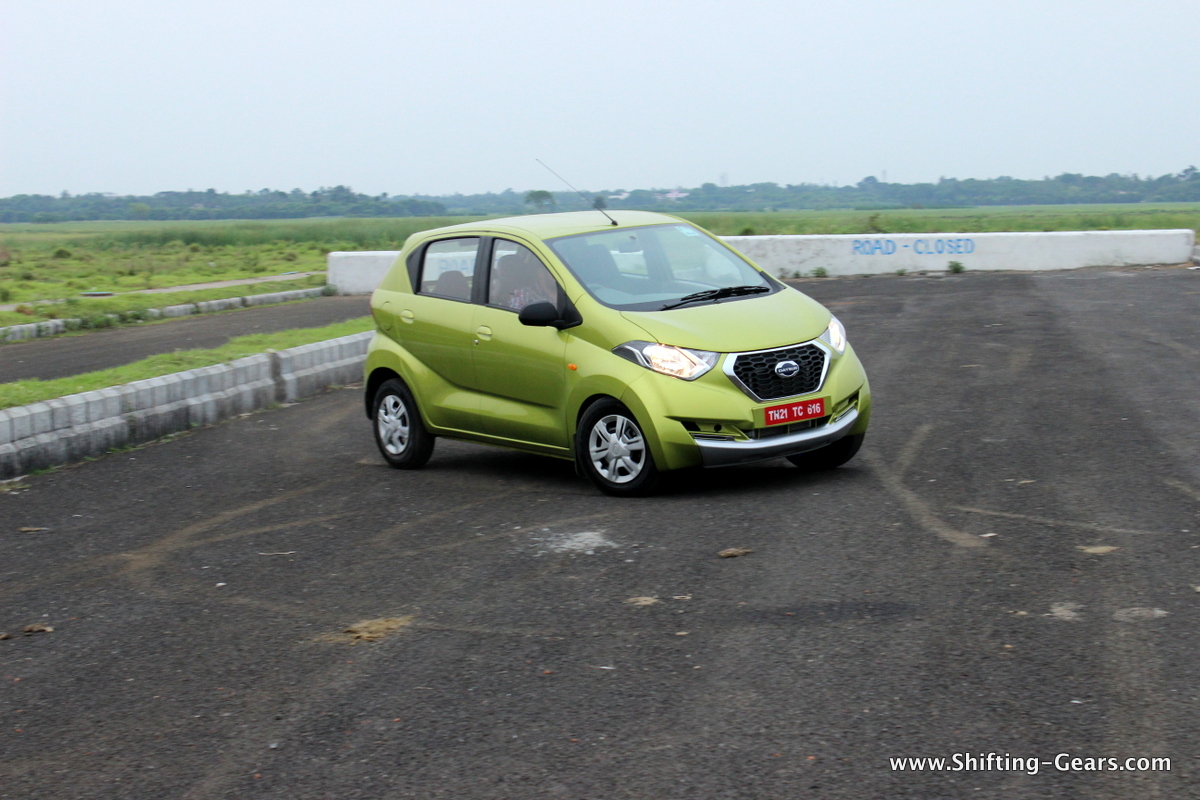 This car is purely designed for the urban Indian commute. Datsun has managed to make this car lighter than the Kwid. It’s a peppy car to zip around town and one can see how light it feels on the wheels. The top model has an electronic power steering. Owing to its good height the car is real easy to judge around and hence makes this a success for city driving. The engineers confirmed that there were no significant changes on the platform for the Redi-Go. 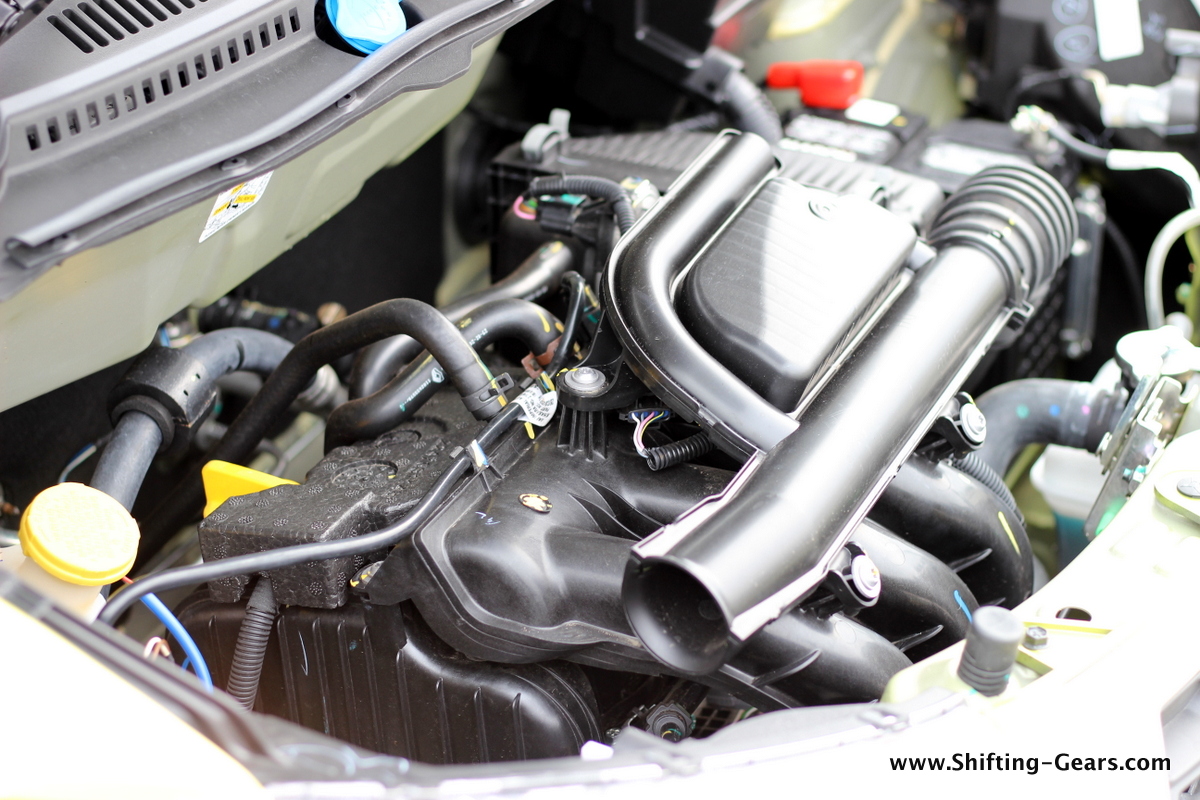 The platform which is split into separate modules of engine bay, dashboard, front and rear underbodies and electrical/electronic architecture offers various possibilities. This effectively means that the same platform can spawn a hatch, sedan and even a compact SUV. The front suspensions are McPherson struts with lower transverse link while the rear makes use of a twist beam with coil springs. Despite the tallboy design, body-roll isn’t that pronounced.

The grip levels of the 155/80 R13 Ceat tyres were good for city roads. Even on winding roads, the rubber holds on to the tarmac without losing on confidence. I could sum it up by saying that this car is a good handler while driving but at high speeds, this can get a little shaky. Clearly this indicates that it’s more likely preferred to be a city commuter rather than high speed driving. 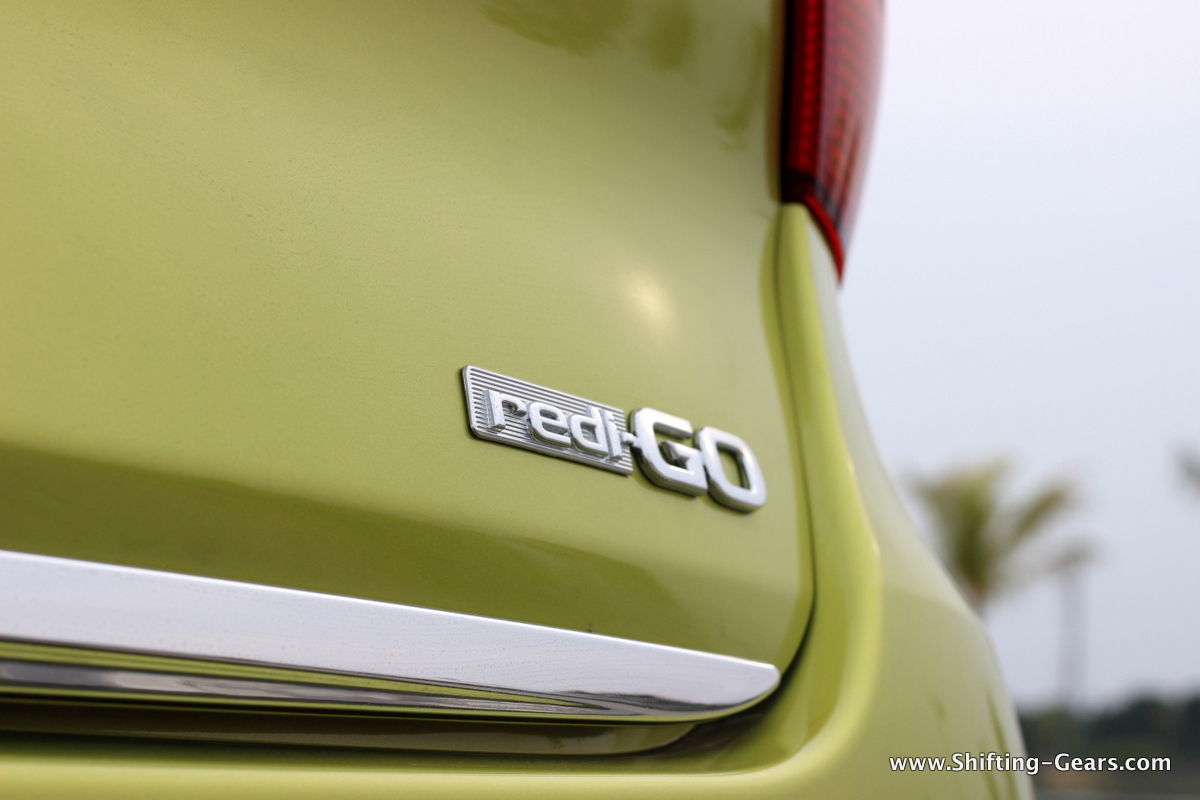 Datsun is pricing the RediGo at Rs. 2.5 – 3.5 lakh. This pricing would certainly increase the rate of sales for Datsun but at the same time, this may affect the Kwid. Renault has a better quality of styling, interiors and equipment which make it an overall package in comparison to the Maruti Suzuki Alto which is now looking like an old workhorse in the A-segment. Apart from the Kwid which is also a good looking vehicle for first time small car buyers, the Redi-Go is a very good looking urban commuter, and the sales figures are showing that things are in favour for Datsun.

Click here to check out the Datsun Redi-Go photo gallery.