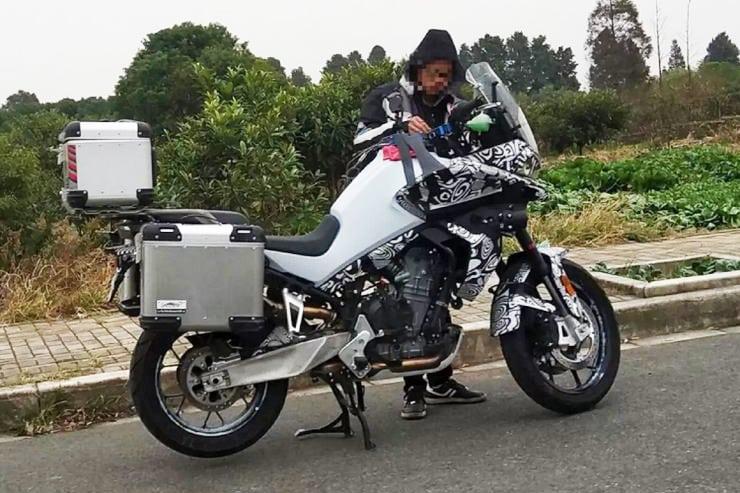 A new contender in the adventure sports segment has been spotted testing abroad. The spied motorcycle is a new adventure class motorcycle from CF Moto which appears to have been testing the bike to compete in the 800cc segment.

The CF Moto adventure motorcycle was spied in full camouflage covers and appears to be in the pre-production stage. The motorcycle is tall and daunting by its appearance and has been styled like a full-size enduro with a large fuel tank, long travel upside-down front forks, a tall windscreen, a mini fairing, a single scooped-up seat, upright handlebars and the photographed test mule was equipped with hard case panniers and a top box. Hardware also includes alloy wheels, a dual-disc setup on the front and a single disc on the rear wheel. The production model could get a wire-spoked version with full off-roading capabilities.

Unconfirmed reports have also suggested that the CF Moto adventure is likely to be powered by the KTM 790 engine as it is the brand’s partner since 2017. If the rumours are to be believed the CFMoto adventure could make space in the 800cc segment which is dominated by the Triumph Tiger, BMW 850GS, KTM 790 Adventure and the likes.

Talking about the engine, the KTM 790 engine is powered by the 799cc LC8c liquid-cooled new-generation parallel-twin cylinder with an 8-valve DOHC cylinder head that is able to produce 95 Hp of power and 88 Nm of torque matched to a 6-speed transmission with mechanically operated anti-hopping clutch (slipper clutch).

As of now, CF Moto has four products in its product portfolio for India which includes the 300NK, 650NK, 650MT and 650GT. The 650GT which comes with a full faired design and a large touring windscreen, ergonomic seats and handlebar are capable of being equipped with luggage panniers for long-distance riding.

The chances of the CFMoto adventure coming to India are slim at the moment and all depends on how the existing line-up fares in the Indian market.