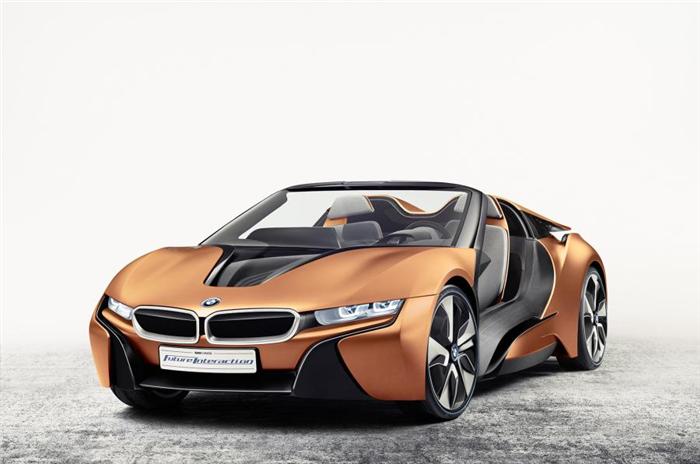 The concept car is actually based upon the already launched hybrid sportscar i8, and is basically a door-less version. Also the car is enriched with the BMW’s latest self driving technology and internet based features. 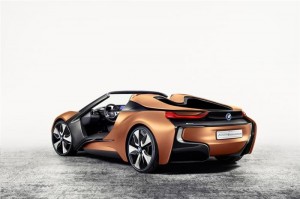 The interiors of the car mainly include three digital display units with with 110x400mm, 21″ panoramic displays. Stretching from passenger side to the center console of the dashboard. New head up display units which display the car dynamics, navigation and driver side field info, new two spoke steering wheel with drive mode selection and multimedia feature buttons are also included. 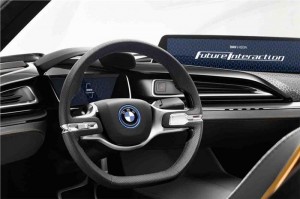 Also, a new high definition 3D instrument cluster has been invented for driver. The instrument panel gives information about the front moving traffic and the oncoming traffic, which is out of sight from driver. This system will improve the safety of driver and passengers in both modes, the manual and the autonomous mode of driving.

The panoramic display is claimed to be equipped with the BMW’s Open Mobility Cloud System that can also lead to video calling in the autonomous driving mode. 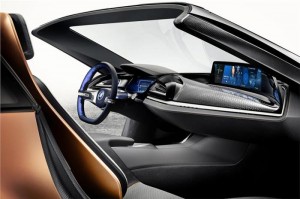 Another unique feature is the Air Touch. The dashboard has been fitted with sensors that allow the passenger or driver to control the panoramic display features by gestures like hand waving and signaling.

Pure Drive, Assist Drive, Auto Drive are the three driving modes with which the i Vision Future Interaction Concept has been equipped with. Under Pure drive mode, the car delivers optimum levels of performance with driver assist function kept in the background. In Assist mode, the assistance systems become more involved with the driving of the car and actively intervene in times of need. In Auto mode, the car is fully autonomous, controlling all aspects of driving including steering, acceleration and braking.

Technology is surely taking it’s toll everywhere and this car is just another example of it! Brilliant isn’t it?