If there is one segment of motorcycles in India which really sell, it’s the 150cc category. And if there is a company that dominates this segment, it has to be Bajaj Auto. And this year Bajaj has cleverly used the spirit of patriotism to market their latest commuter. It’s called the V15 .

It is built partly with the scrap metal from Indian Navy’s now decommissioned and dismantled aircraft carrier, INS Vikrant. This bike has been brought into production to pay tribute to the legendary warship. The metal from INS Vikrant has been used only in the fuel tank and the percentage mixed is a well -guarded secret. 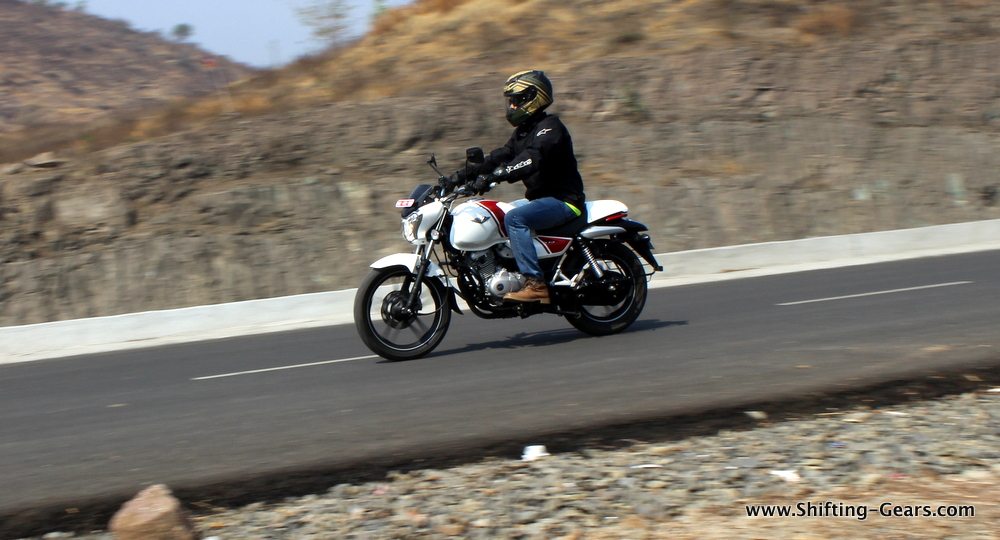 The motorcycle itself has been developed from ground up with an all new design, new double cradle chassis and a newly developed engine that is exclusive for the V15. The engine, with a new stroke and bore configuration, has been tuned to deliver a healthy low end mid-range power and torque and is aimed at hassle free city riding.

We were invited to Pune to test ride this bike and see how it fared overall.

Design:
The bike has a totally new and unique styling. It is the combination of a cruiser and has all the instincts of a café racer along-with keeping in mind its purpose of being a commuter. This is a bike which is a pure combination of 2 motorcycles. On the first look you would observe the trapezoidal headlamp with chrome edges and a sleek visor over it. Then you notice the chunky steel tank that comes from the steel from the INS Vikrant, while the fuel cap is finished in chrome having INS Vikrant text written on it.

Holding along the tank is a single seat followed by a cowl. This is the only 150cc motorcycle in India which has a rear seat cowl. The tail end gets the LED lamps and a mudguard which resemble a Suzuki Intruder. 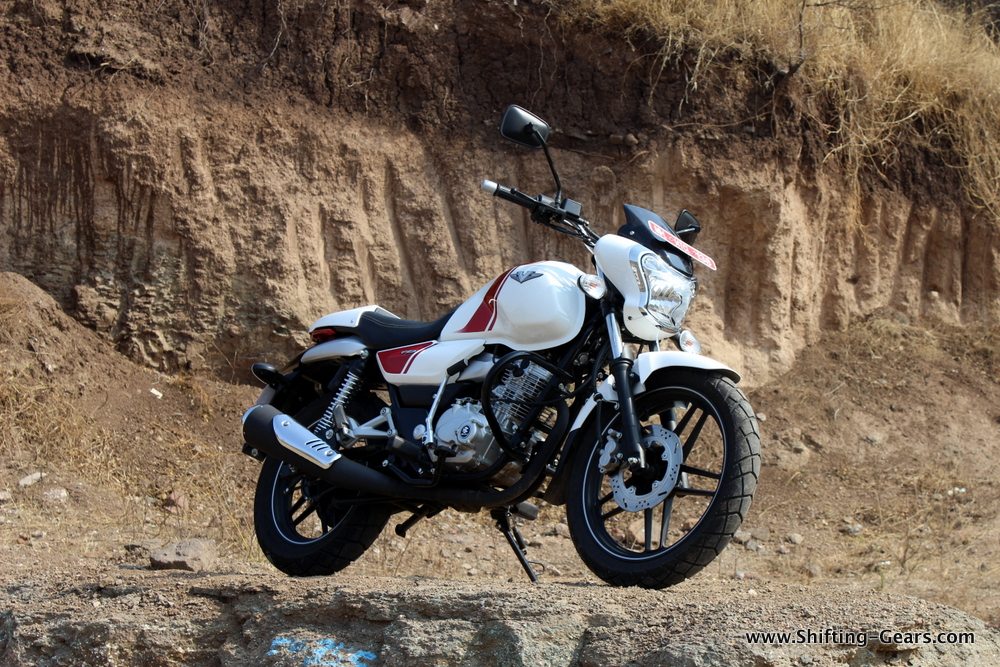 The bike comes with 10 spoke matte black alloys with a thicker rear wheel. The engine block is finished in grey and a black exhaust with chrome bits designed as a silencer guard and an exhaust tip. The judicious use of chrome on this bike does give it an attractive and a premium feel. 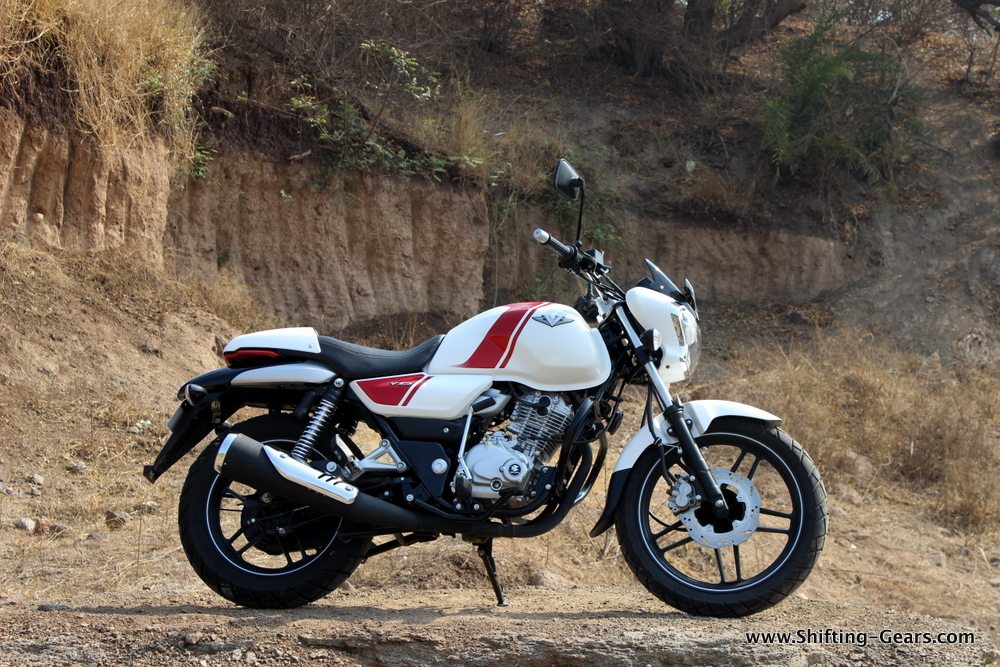 I personally think that Bajaj have definitely hit the right note with the organic form of this bike except the headlamps which look a tad bit out of the place.

The Bajaj V15 gets an analogue meter and a digital fuel gauge which turns red once the fuel goes into reserve. There are LEDs for the indicator, high beam, neutral gear and not to forget the blue Bajaj logo but all these are barely visible in bright day light. There’s no tachometer on the console either.

The finish of the switch gear is decent, the switches are easily usable but the commuter misses out on an engine kill switch. Cost saving is evident in this department to cover up the additional costs in the other departments. 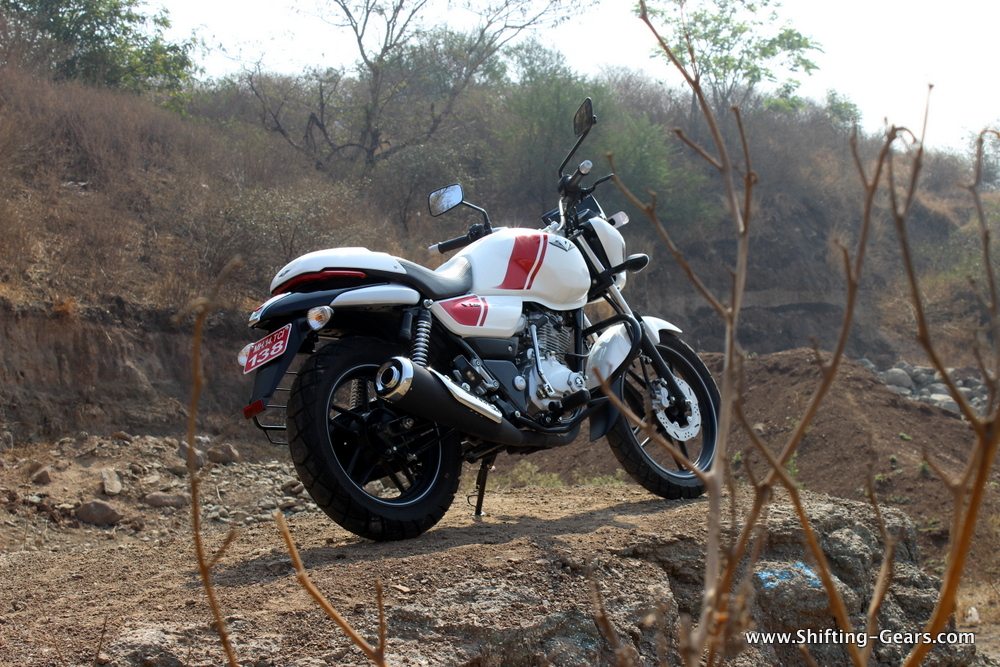 Ergonomics:
This is a city commuter and the ergonomics are basically upright with straight handlebars and front set foot rests. The seat is really comfortable and is great especially if you have to ride for a long time as the seat lets your posture sink in.

The tank is pretty big but accommodating enough for your legs. The rear seat is hidden under the cowl and can be accessed by allen keys which is integrated into the key of the bike. The rear end gets a grab rail should you choose to remove the cowl.

These new additions to the bike have really made it different from the rest of the bikes in its segment. The overall new design philosophy somewhat resembles the combination of a Harley Davidson and the Avenger. It sure would catch your eye from different angles as to a fusion of several bikes together but in the end it wins when it comes to be ridden. 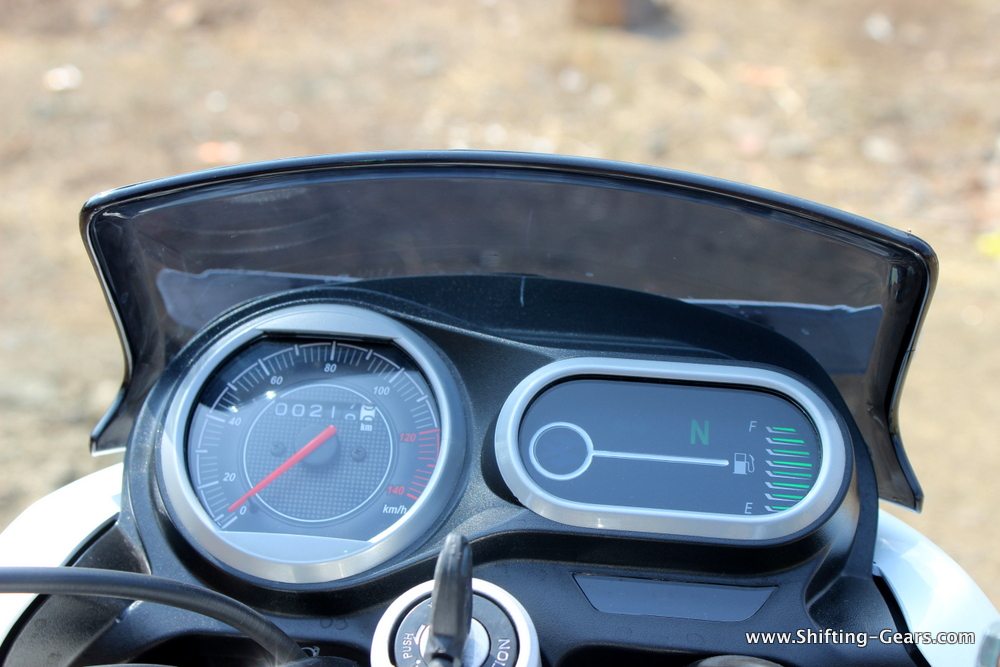 Engine, performance & handling:
The V15 is typically designed for the person who is not really into speed but could suffice with the decent performance of a city bike. At the heart of the V15 is a new 150cc, single-cylinder, air-cooled, 4-stroke petrol engine producing 11.8 BHP of power @ 7500 RPM and 13 Nm of torque @ 5000 RPM. 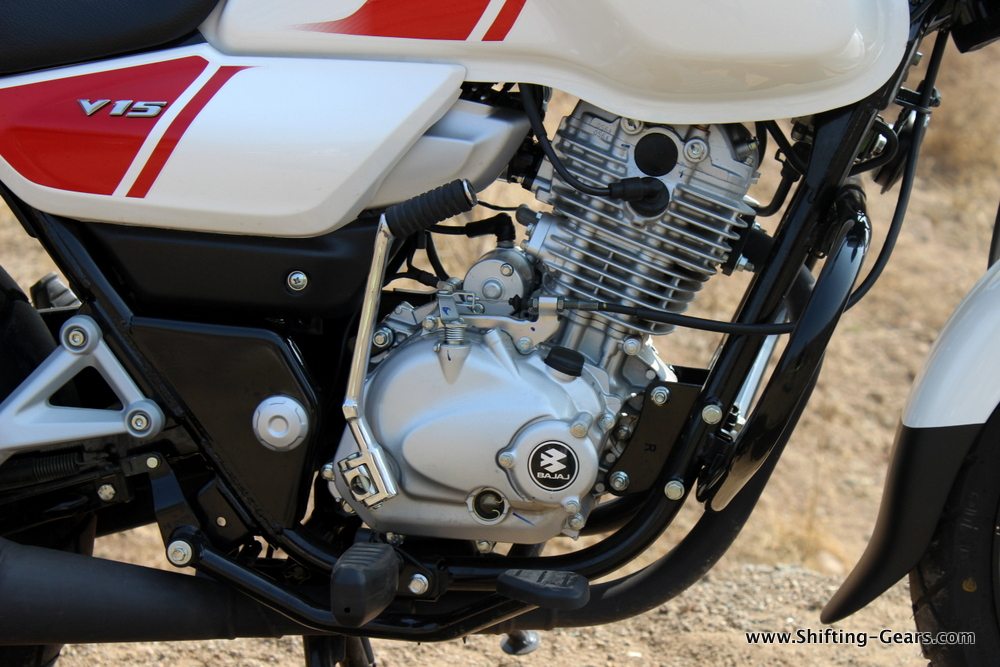 The engine is mated to a unique all-up pattern 5-speed gearbox. This is a little difficult to get as all the bikes manufactured in India have the standard one down 4 up pattern. The clutch is light and the gear shifts are nice and smooth. The engine feels torque and we had on demand power on any gear.

This torque in the engine gives the bike an ample mid-range and you could maneuver this bike in the city at any gear without a lot of downshifting or upshifting. This makes the bike a really good city commuter.

It’s not exactly your highway high speed ripping bike and we did find it a little difficult to reach triple digit speeds with ease. This is owing to the tall gearing of the bike. Another thing which I loved about this bike is the exhaust note. It sounds throaty at lower RPM’s and this is by far the best sounding bike built by Bajaj. 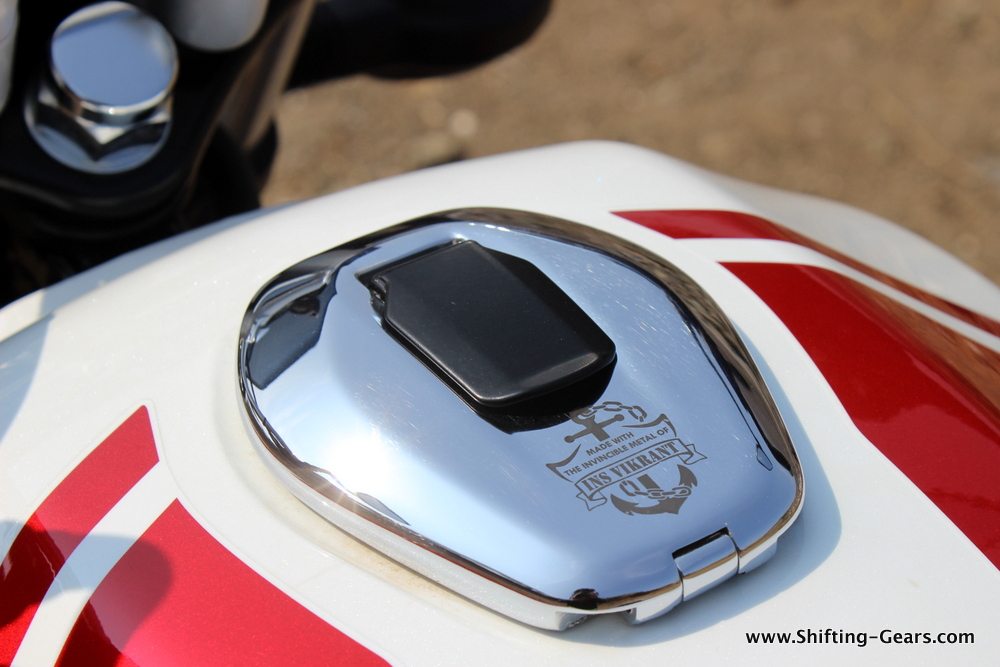 The commuter segment is the one which is on demand in India and Bajaj plans to capitalize this opportunity well. The design is not exactly the type which would be loved by all but it sure will push itself to a certain audience. The V15 is a likeable little machine with its own, unique character and it might just click for the audience that Bajaj is targeting.

In spite of all the criticism, Bajaj managed to sell 35000 units of the Avenger in March. That’s a huge number for a brand which was nigh dead. This was a very clever move by them and the bike was well received by a huge amount of fans.  Hence this is the same agenda they are using with this one.

With a price of around INR 62,000 (Ex-Showroom) this bike looks like a must-have in that price bracket and this would be Bajaj’s reason of confidence in selling this bike in the market.

Click here to check out the Bajaj V15 photo gallery.