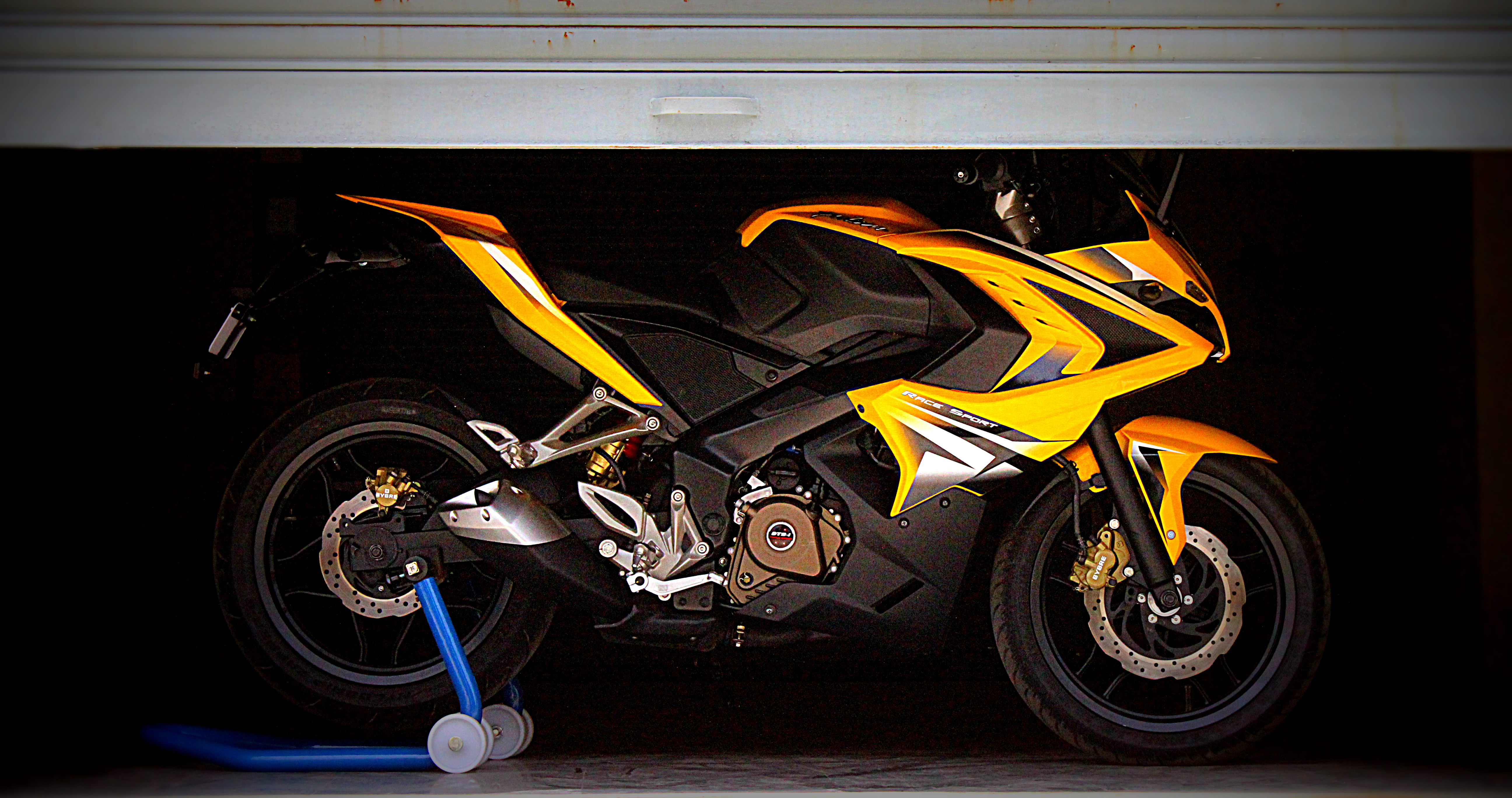 Launched a couple of days back, the Bajaj Pulsar RS200 is making quite some noise in the industry. In its 15th year in the motorcycle industry in India, the Pulsar brand has a strong fan following and a lot of potential customers are visiting Bajaj showrooms off late. While sales have been on a downfall in the recent past, the Pulsar RS200 comes as a refreshing change in the showrooms, primarily since it is the brands first fully-faired sportsbike. Not just that, Bajaj even claims this is the fastest Pulsar, yet… 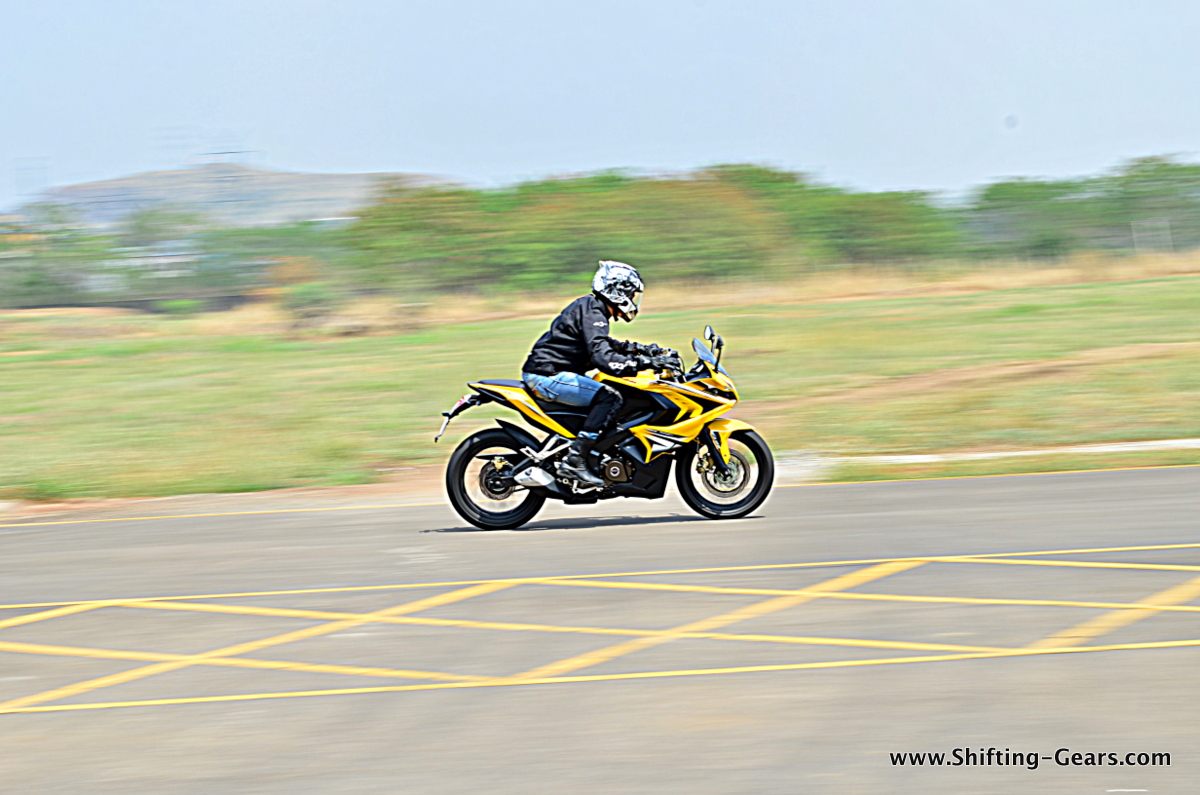 To quickly know the differences between the Pulsar RS200 Vs. Pulsar 200NS, click here.

This report will primarily focus on how the Pulsar RS200 handles on a track. Claimed to be the fastest Pulsar, is it really that good? Does it have enough punch to dominate the segment? Bajaj invited us to their private test track at Pune in Maharashtra to find out.

It was a hot sunny day in Pune today, with track temperature around 40 degrees. That track was reserved for media test rides and we were handed over the top-sped Pulsar RS200 motorcycles equipped with the single-channel ABS. 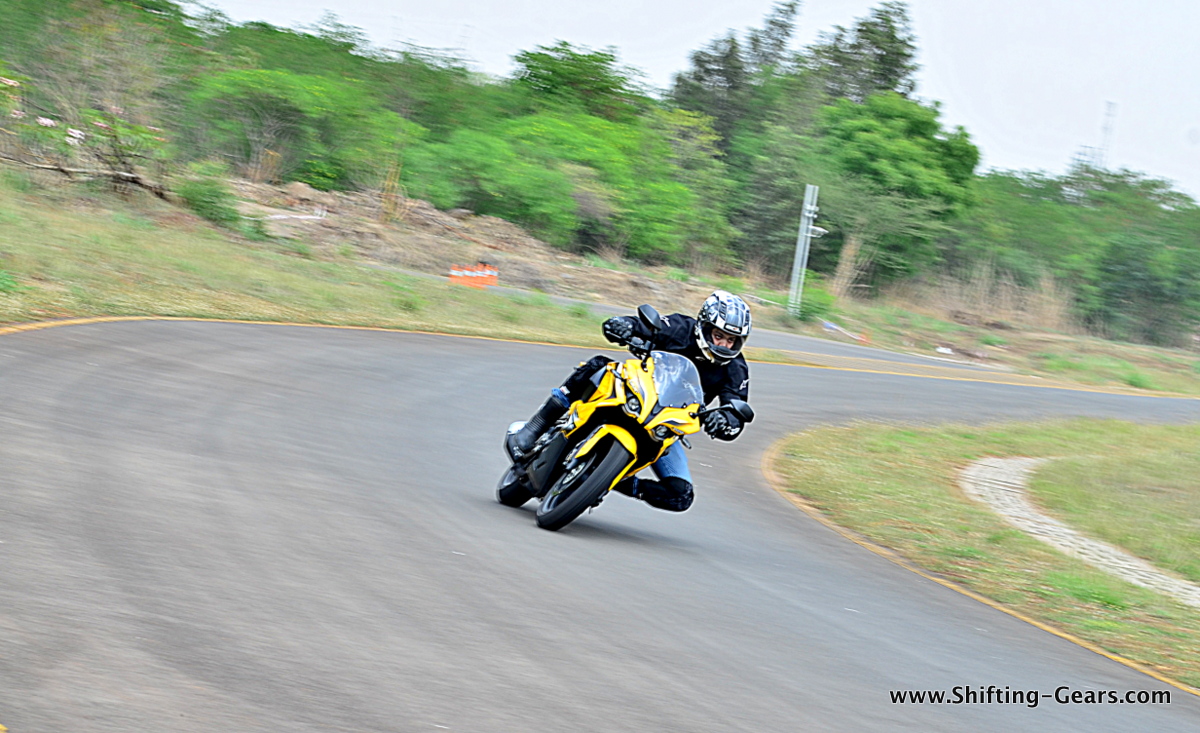 First things first, when you sit on the bike, you instantly notice that the riding position is very relaxed. Don’t get us wrong, it is the right mix of sporty & comfortable, but not very committed say like the Yamaha YZF-R15, which is actually a good things since not too many could otherwise make use of it as a daily commuter. Compared to the Pulsar 200NS, the clip-on handle bars are now a bit lower, which allow you to lean forward on the bike, and the riding posture is not really upright like the naked sibling. Riders of all heights would be comfortable on the Pulsar RS200 and although you lean a bit forward, there is no pain felt on your wrists. Foot peg position is rear-set, and almost at the sweet spot. Seats of the RS200 are different, and the seat compound is decent for short as well as long rides. We found it a bit hard, but not too many would complain about it.

Bajaj claims that there’s been no changes made to the initial gearing on the Pulsar RS200. Which suggests that in-city rideability should be as good or identical to the Pulsar 200NS. It would actually be a bit more crisp with the addition of fuel-injection. Powering the Bajaj Pulsar RS200 is a 199.5cc, single-cylinder, liquid-cooled, fuel-injected petrol motor producing 24.5 PS at 9,750 RPM and 18.6 Nm of torque at 8,000 RPM matched to a 6-speed gearbox. Power figure is 1 PS more than the 200NS and torque has increased by 0.3 Nm. 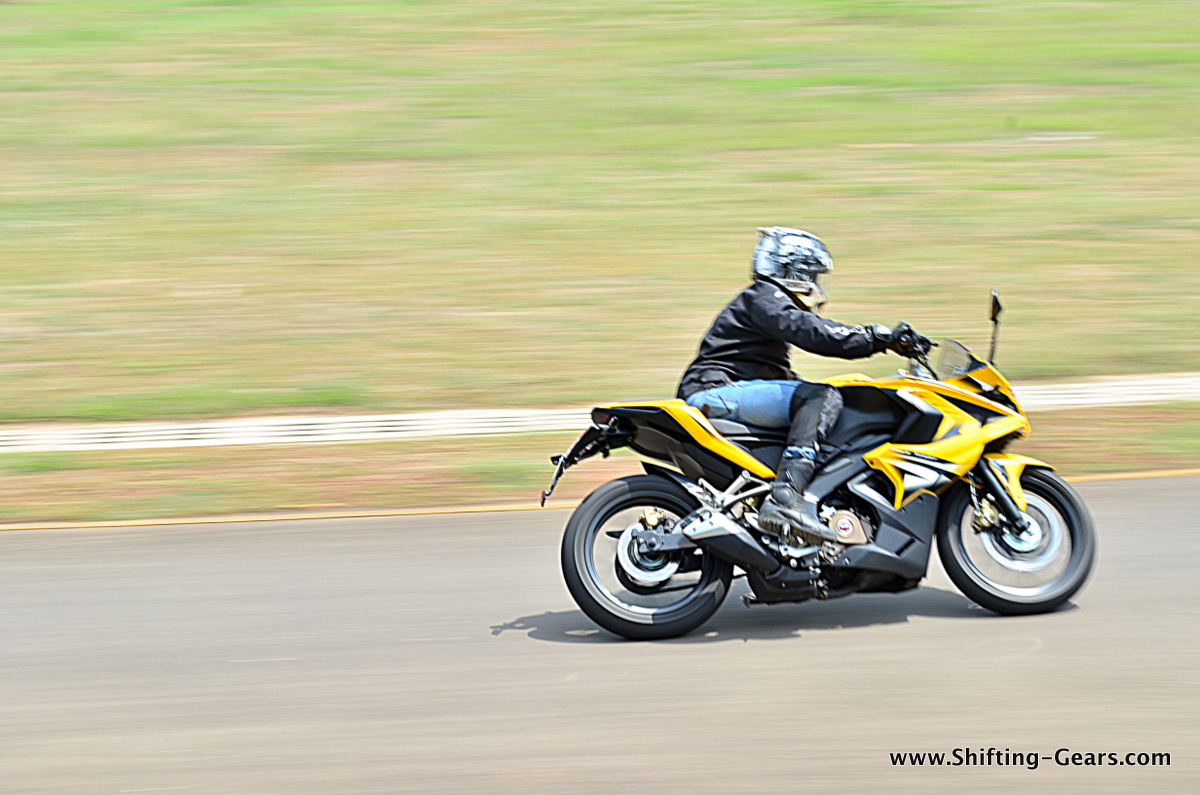 What you notice almost immediately after you fire up the Pulsar RS200 is that the NVH levels are superior to the naked sibling. The engine idles a lot smoother, and thanks to the new exhaust muffler, the bike even sounds good. Vibrations are very well contained not just at idle, but even when on high speeds and closer to the redline. We kept the engine on the boil for a good 8 laps (3 km each lap) and the engine showed no signs of feeling strained or feeling gruff. What left us impressed was that even when the needle climbed over 10,000 RPM, the power delivery although tapered off, the engine vibrations were bare minimum on the handlebar & footpegs. This is surely a step up by Pulsar standards. On a hot day, although redlining the 200cc motor frequently, the heat management on the Pulsar RS200 was adequate. Very little heat gets directed to your feet, hence riders would be happy during Indian summers.

On the move, the Pulsar RS200 climbs well over 60 kmph in second gear, easily. Zipping away from a traffic signal would be very easy for owners. While you wring the throttle, the engine is now more responsive with the addition of fuel-injection and in-gear acceleration has noticeably improved compared to the 200NS. Although we do not recommend high-speed runs on the Indian streets, at the test track, the Pulsar RS200 managed to clock 149 kmph on the speedometer. Consider a generous amount of speedo error as Bajaj claims the top whack to be 141 kmph for their fastest Pulsar till date. While 149 kmph was clocked when in crouched position, sitting upright will have the speedo held up around 130 kmph. 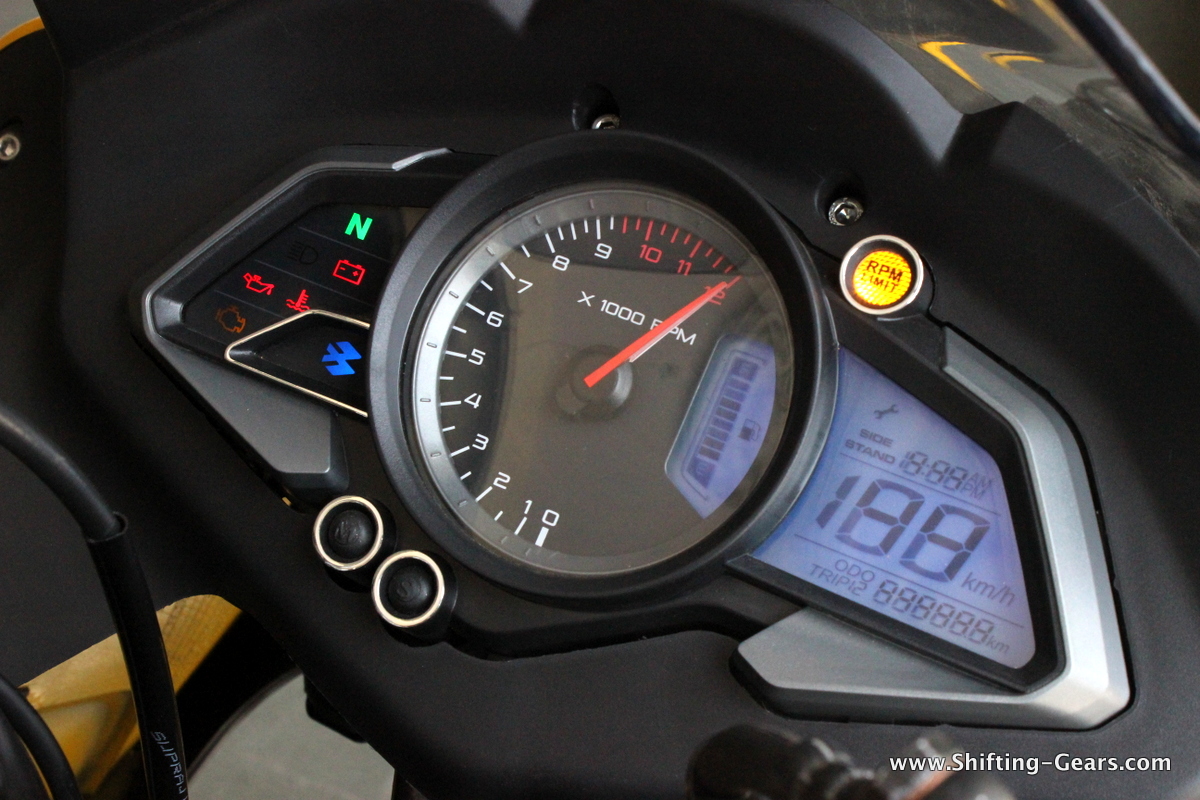 Gearshift quality is almost at par with the competition. It doesn’t really feel slick, but its not rough or sluggish at all. Not even once did we miss a gear or the engine false-shifted. The gearbox does a fair job on the track as well as on the city streets. The clutch again is light, and city traffic won’t leave you with sore fingers. Another very non-Pulsar phenomenon is that the RS200 supports clutch-less gearshifts. The gearbox is forgiving and in case your hand is not in sync with your toes, you won’t be caught in the act.

Handling department is where the Pulsar RS200 really shines. Compared to all the Pulsar models we’ve seen in 15 years, this one is surely the best when it comes to performing on the limits. The RS200 weighs a good 20 kg more than the 200NS, yet, handling is very nimble. The bike is very agile and switching lanes in the city, or attacking corners won’t be too much of a problem. If you’re more inclined to sporty riding, scraping footpegs is quite easy too. The bike leans comfortably and it is easy to flick the bike in corners, back-to-back. With the steering angle changed, the RS200 has a shorter wheelbase compared to the 200NS. This makes it even more flickable. Turn-ins are quick, but not as sharp compared to the KTM RCs. On-track performance was very confidence inspiring and we didn’t feel nervous at all. The only grouse was that the counter steer is quite noticeable and riders need to direct the bike accurately when in mid-corners. At high speed, the bike stays stable. We didn’t really face crosswinds, but in a straight line, the Pulsar RS200 shoots sharp. When crouched, the wind is deflected nicely over your helmet and aero performance is acceptable. Windblast is well controlled and you don’t feel it on your thigh section. The fairing helps deflect wind around & over the rider to reduce fatigue. Since the track was a nice flawless stretch of tarmac, we couldn’t really test the suspension performance & riding comfort. For hard riding though, the setup is decent and allows you to play around your favourite twisties. The bike remains planted and does not bounce around too much when you flick it from one corner to the other. 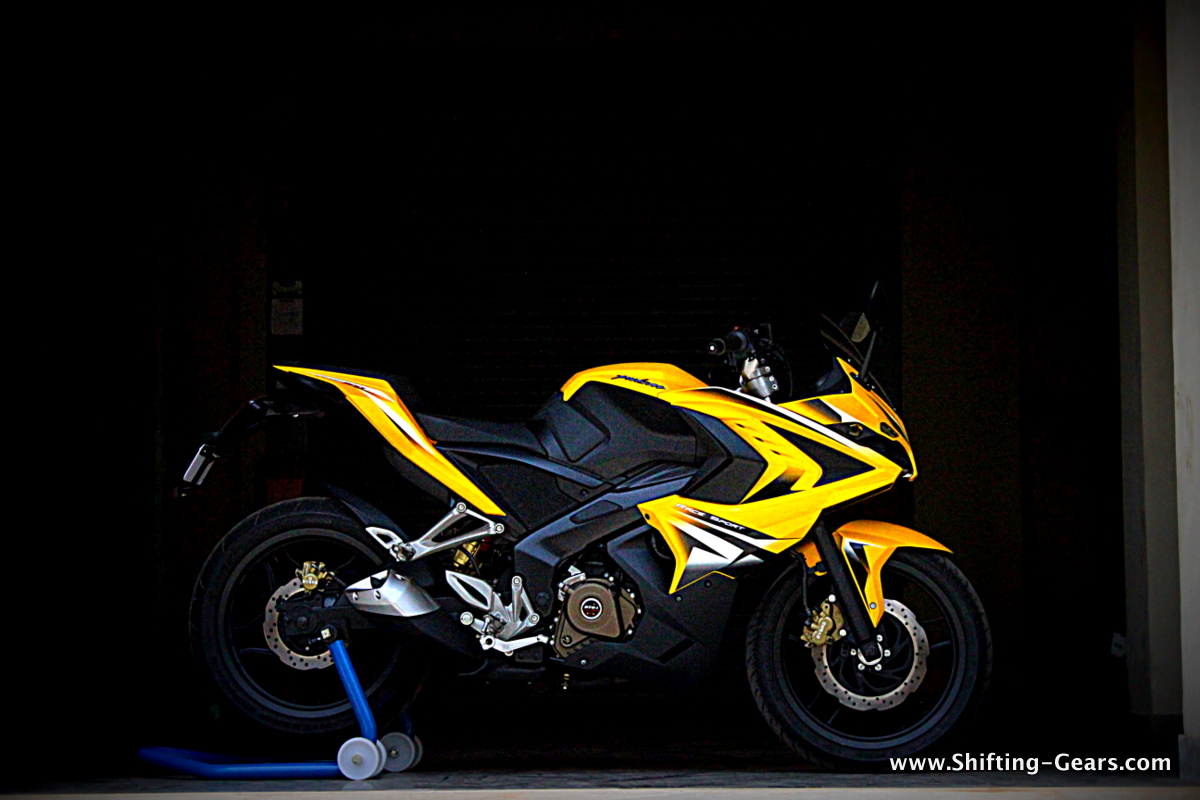 You don’t get Metzeler tyres like the KTM RC390, but the Pulsar RS200 comes shod with MRF Revz tyres. These are a big step-up compared to the horrible Eurogrip tyres which the Pulsar 200NS gets. MRF is known to offer the best of both worlds; good price and relatively more performance. When mid-corners, on high speeds or under hard braking; the tyres do not give up very easily. Grip levels are very good and more than sufficient by OEM standards. These sets are actually such that you can opt for the stock setup even after the first set is worn out.

Bajaj offers ABS only on the front wheel. A single-channel unit developed by Bosch. Although this is done for cost cutting, it would have been great if Bajaj charged a couple of thousands extra and offered a proper ABS system on the top-spec model, which is optional anyway. Braking performance is adequate. The tyres with their good grip levels do not let the wheels lock up very easily. The front wheel ABS works well and you can grab the lever without second thoughts while attacking a corner. ABS kick-in is very mild, and does not happen very often. While you see an ABS pulsar ring on the rear disc, this works only as a speed sensor, and does nothing to the rear brakes. Under hard braking, the rear wheel does lock up, which everyone would have expected given there is no ABS. Brake bite is acceptable, and even after non-stop hard braking, the brakes did not fade away, which is a good thing. 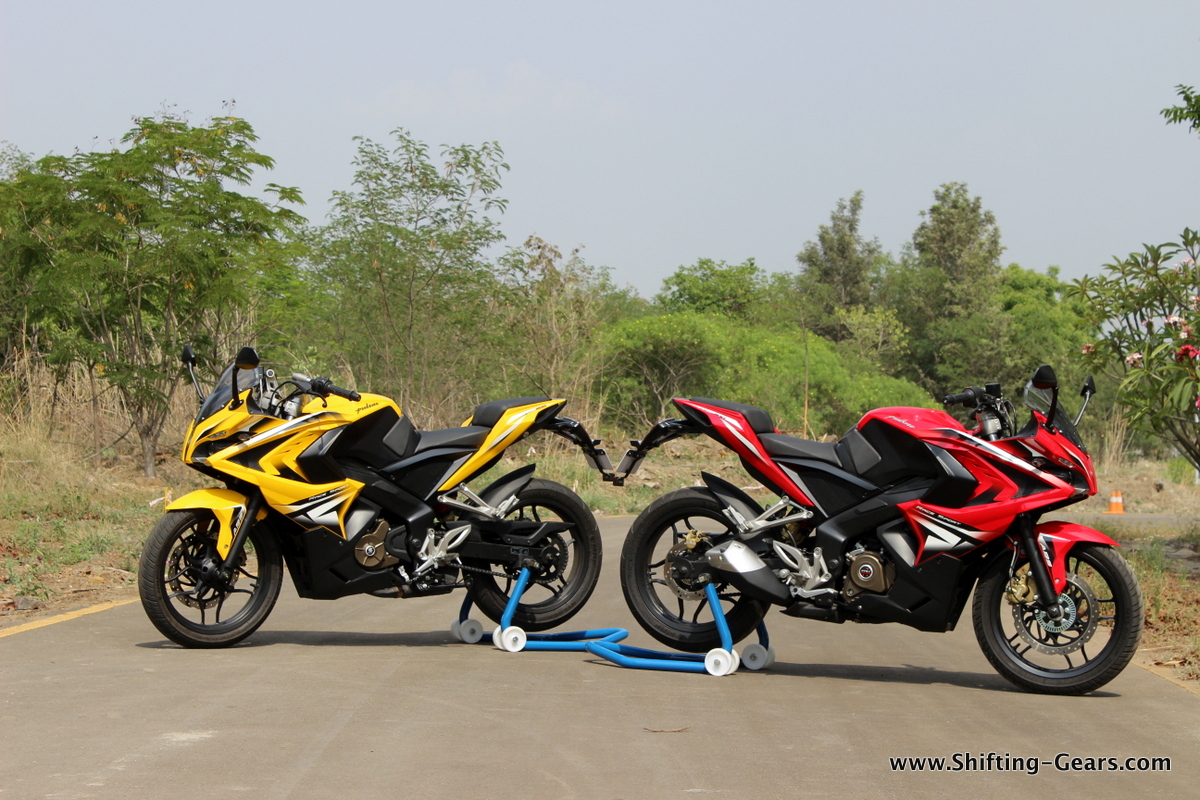 So if you’re looking for a fun motorcycle, and on a tight budget, the Pulsar RS200 offers excellent value for money. Yes, we are not a fan of the design which looks a bit to flamboyant and busy, but then, it will have its share of fanboys too. Those used to the Yamaha R15 or the KTM RC200 won’t really be impressed easily, but if this is your first supersport motorcycle; you will be thoroughly impressed. Although styled to pose & perform well at a race track, the Pulsar RS200 can perform your daily commuting task easily, without straining the rider. If you’re in the market for a entry-level motorcycle, and do not mind the cheesy decals, make sure to give the Pulsar RS200 a shot. It is surely an improvement by Bajaj standards!