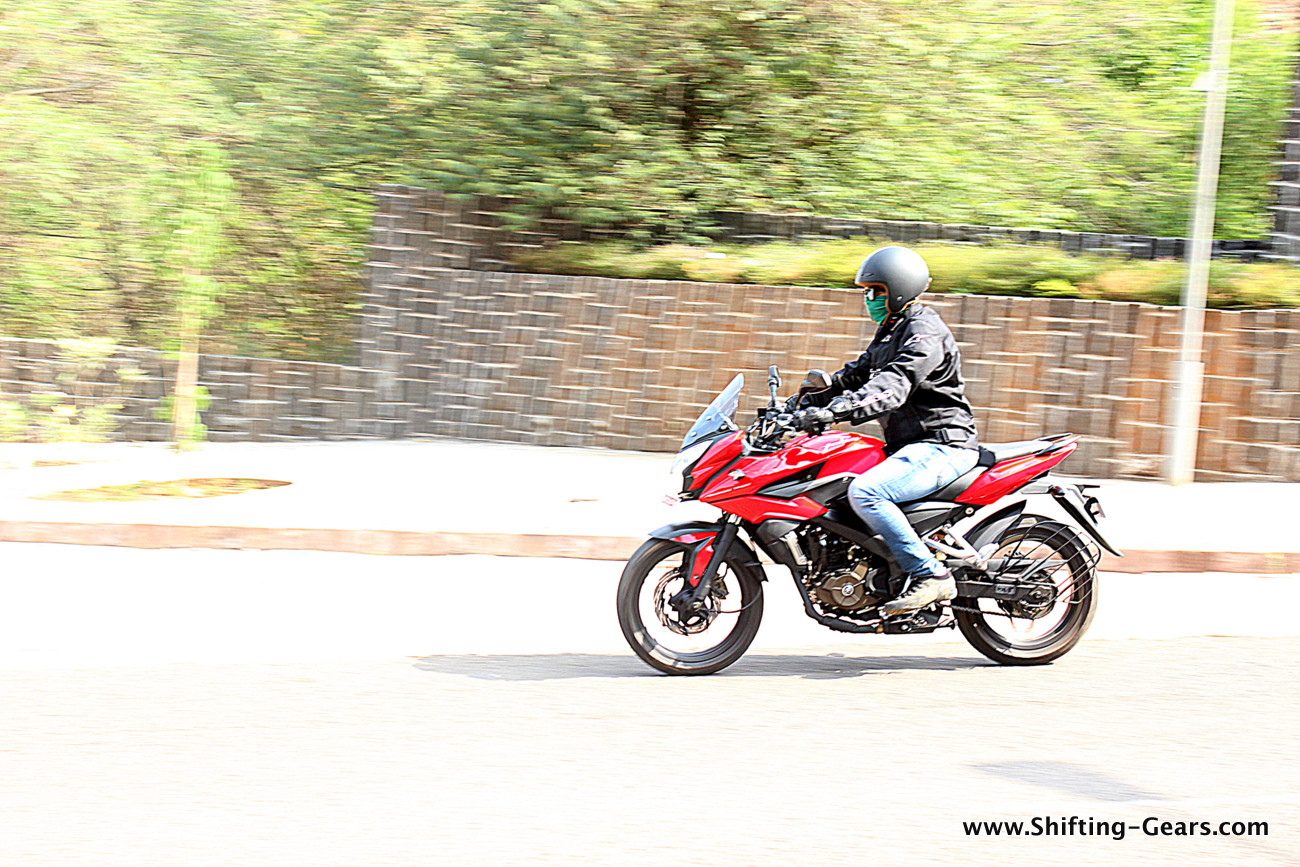 You can be a swimming champion, but sometimes, the tides can catch you unaware. This is exactly what happened to Bajaj Auto in recent times. With more and more competition entering the Indian two-wheeler space, Bajaj Auto, a company which was once a challenger for the #1 two-wheeler manufacturer slot is now struggling to hold grounds. But then, just like swimmer caught by the current, Bajaj Auto is also trying to fight back to the top. How? With their same old strategy of launching multiple models under the same brand. The Pulsar brand received two new motorcycles, in a completely new segment – the AS 150 & AS200. Although the name AS stands for Adventure Sports; Bajaj claims that these bikes are not really off-road friendly like the Hero MotoCorp Impulse, but merely regular road going bikes with the ability to tackle rough terrain slightly better. 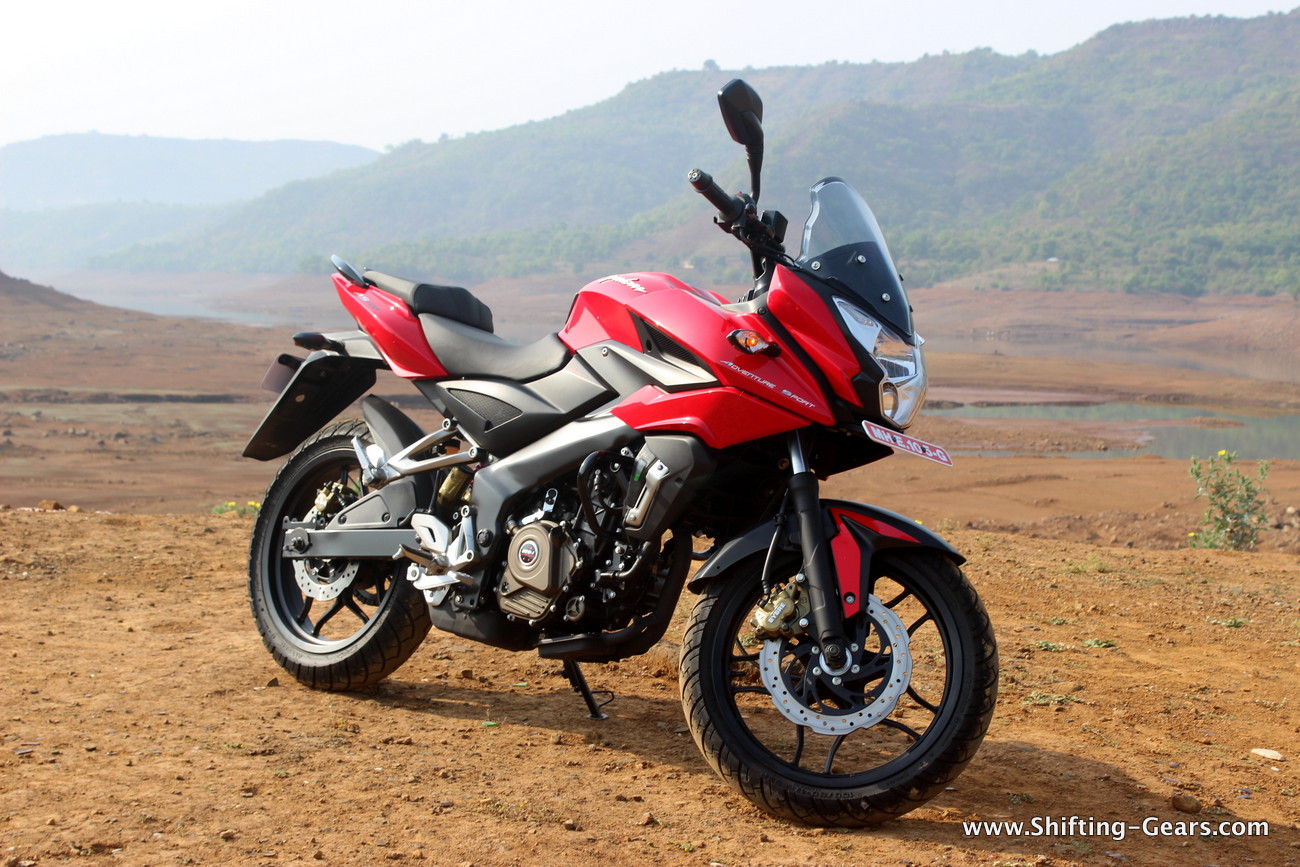 Pricing is key to any product launched here in India, and well, Bajaj Auto has always hit the sweet spot. Priced at Rs. 91,550 (ex-showroom Delhi), the Pulsar AS200 is sure to cannibalize on the 200NS sales. Ideally, it was expected that Bajaj would discontinue the Pulsar 220 post the arrival of the AS200. But Bajaj being Bajaj, wants to keep as many products possible on sale, so that they continue to appeal to a wider audience. Although this leads to a lot of confusion for buyers, Bajaj seems to be sold on this strategy, since a long time.

What’s interesting, is that the naked sibling, the Pulsar 200NS is more expensive than the latest offering. The Pulsar 200NS retails at Rs. 91,552 (ex-showroom Delhi), which is Rs. 3 more than the AS200.

So is the Bajaj Pulsar AS200 just a glamorized version of the 200NS? Does it have more to offer than just looks? We zoomed around the city of Lavasa to find out. 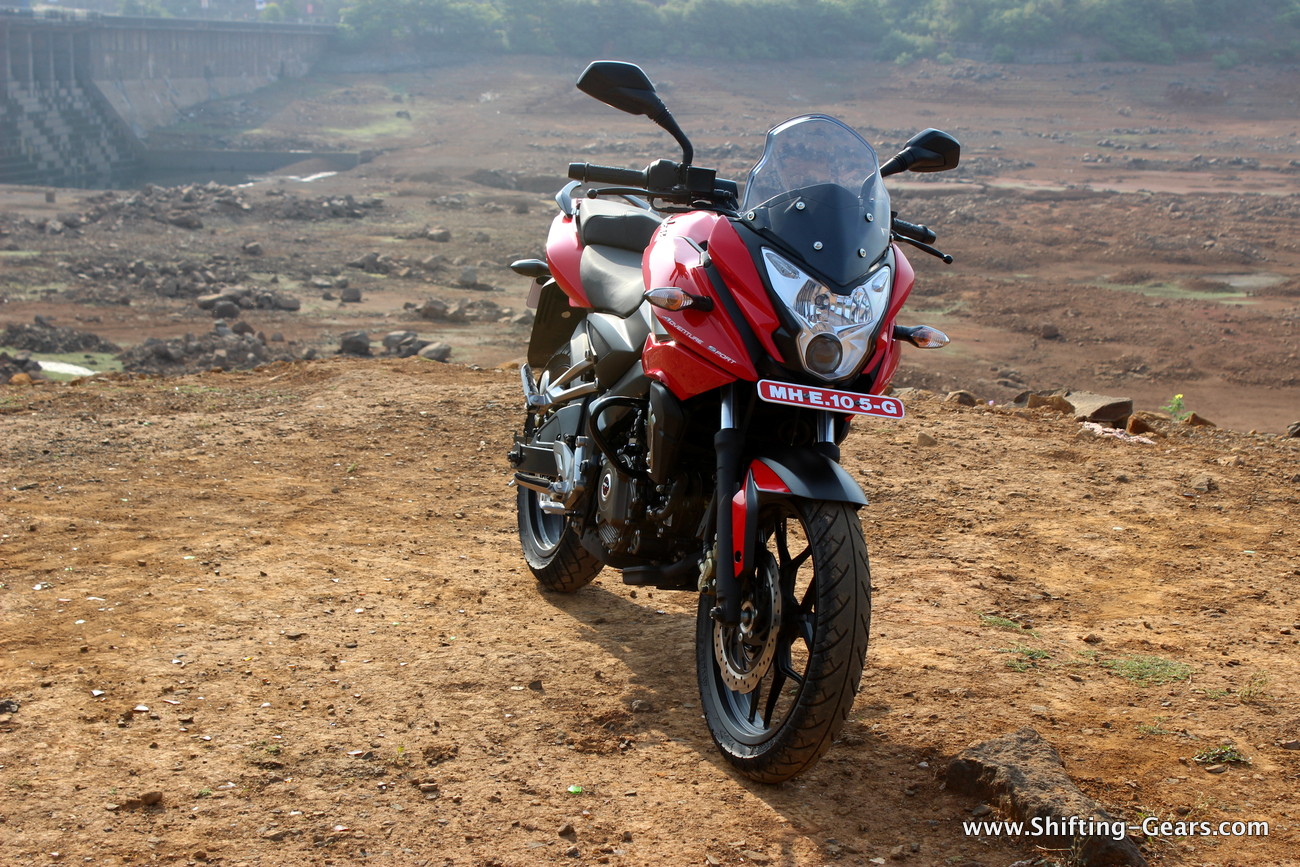 The Pulsar 200NS was a rather attractive looking motorcycle in the Bajaj stable. But still, sales reports indicated that the older Pulsar 220 still manages respectable sales figures thanks to the semi-fairing and projector headlamps. This might have kicked-in the thought process of launching a new version of the 200NS with a fairing & projector setup. The Pulsar AS200 is built around the 200NS with the same mechanicals.

All this extra at the same price sounds impressive doesn’t it? It sure is. Some might ask why has the AS200 ditched the small tail tidy number plate housing from the 200NS. Bajaj clarified that based on the overall design, the body needed to be proportionate. With more bulk added to the front thanks to the semi-fairing, a full-size rear mud guard did more justice to the design. Also, the term ‘adventure sports’ needs something to prevent the mud spray. 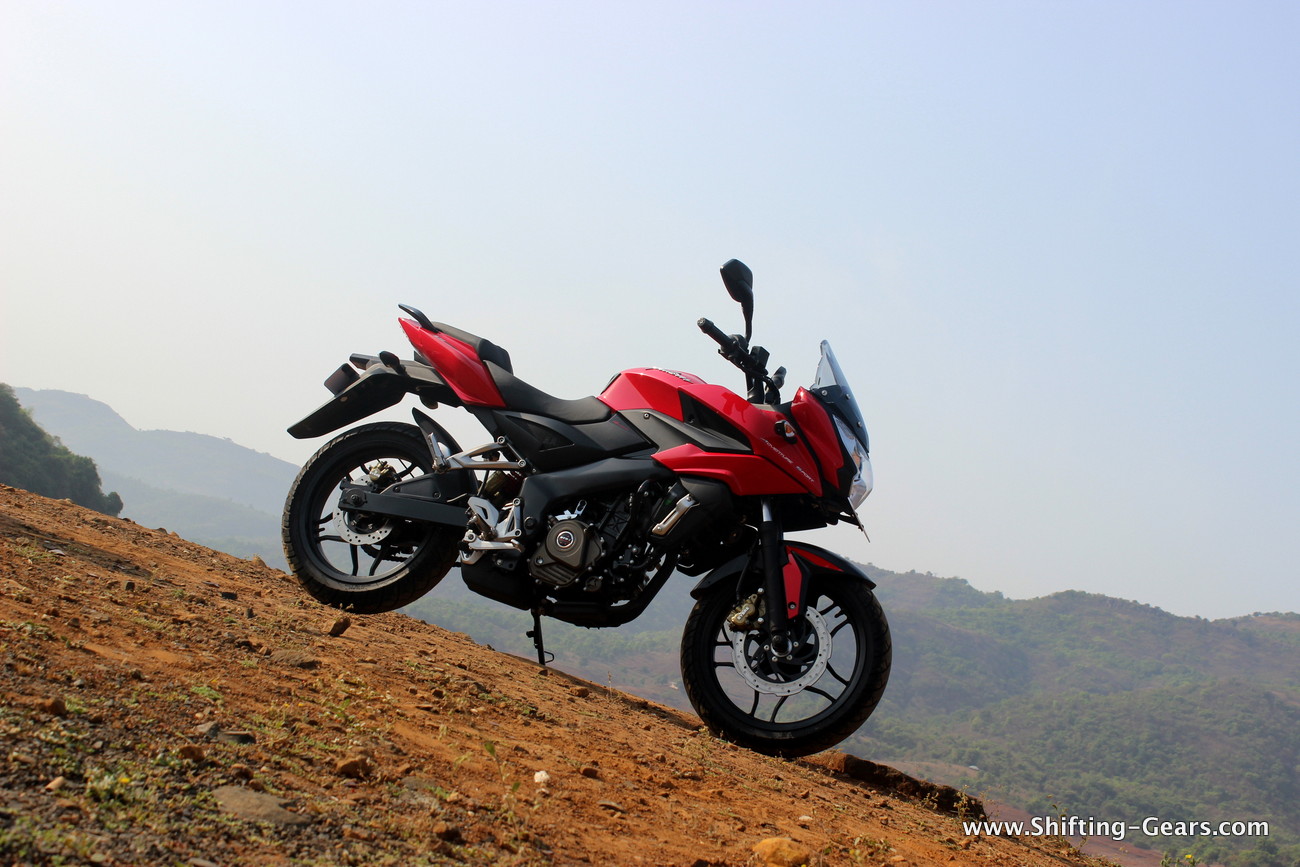 In one glance, the Pulsar AS200 is a tall looking motorcycle and should suit those on the heavier sides well. What we loved is that Bajaj did not go overboard to slap decals all around as they did with the RS200.

Instrumentation & Ergonomics:
Speedometer is shared with the Pulsar 200NS and sports the same 3-pot layout. With tell tale lamps to the LHS, tachometer in the centre & a digital display to the RHS. Fuel gauge is displayed in digital, within the tachometer section. The other digital display reveals data such as speed, odometer, trip meter, service reminder & a clock. The gear-shift light is placed on top, and lights up in amber shade. The plastic panel around the speedometer cover the area neatly, and feel good. Things are bolted on real tight by Bajaj standards. The front windscreen is also not too sloping, to interfere with your vision when looking down at the speedo console. Keyhole is placed conventionally on the handlebar. The handlebars are clip-ons, and painted in black. They are raised for optimum touring comfort. Rear view mirrors are also mounted on the handlebar. Rear view mirror quality however felt a bit cheap, and they would probably loosen with time. Also, the rearward view from these mirrors was not up to the mark. Switchgear is familiar territory and gets blue illumination as well. 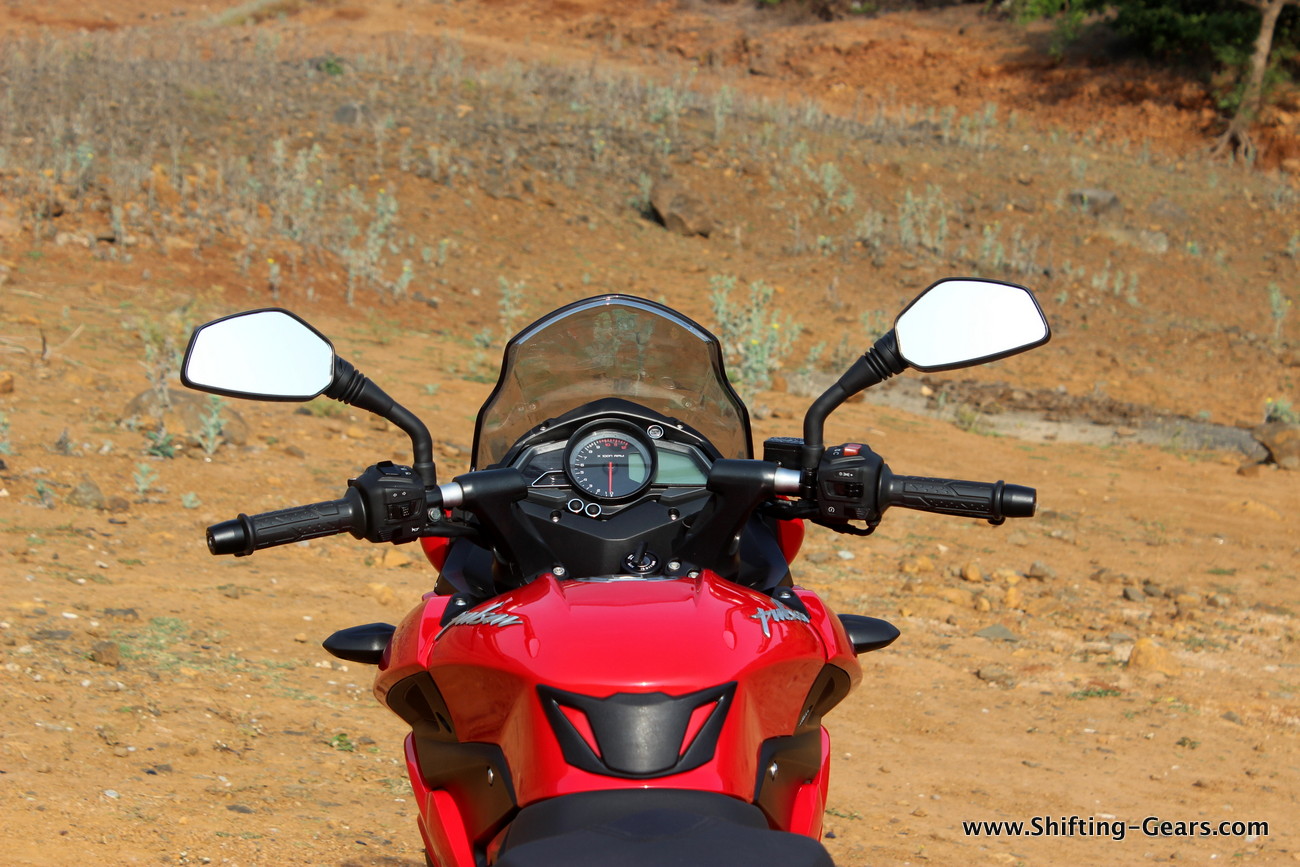 The Pulsar AS200 has a seat height of 807mm, which is identical to the 200NS. It is easy to hop on & off the bike. Seating posture is upright, thanks to the raised clip-on handlebar. This will surely enhance long touring abilities without the rider feeling stressed. Also, the front windscreen does a decent job of deflecting the wind, to avoid stress due to windblast. Foot pegs are rear set, and offer the right mix of sporty yet comfortable.

For the pillion, things are the same as on the 200NS. Seat has decent room to accommodate even those on the slightly heavier side. Seat compound is medium, and should do a decent job of not leaving your saddle sore within minutes. 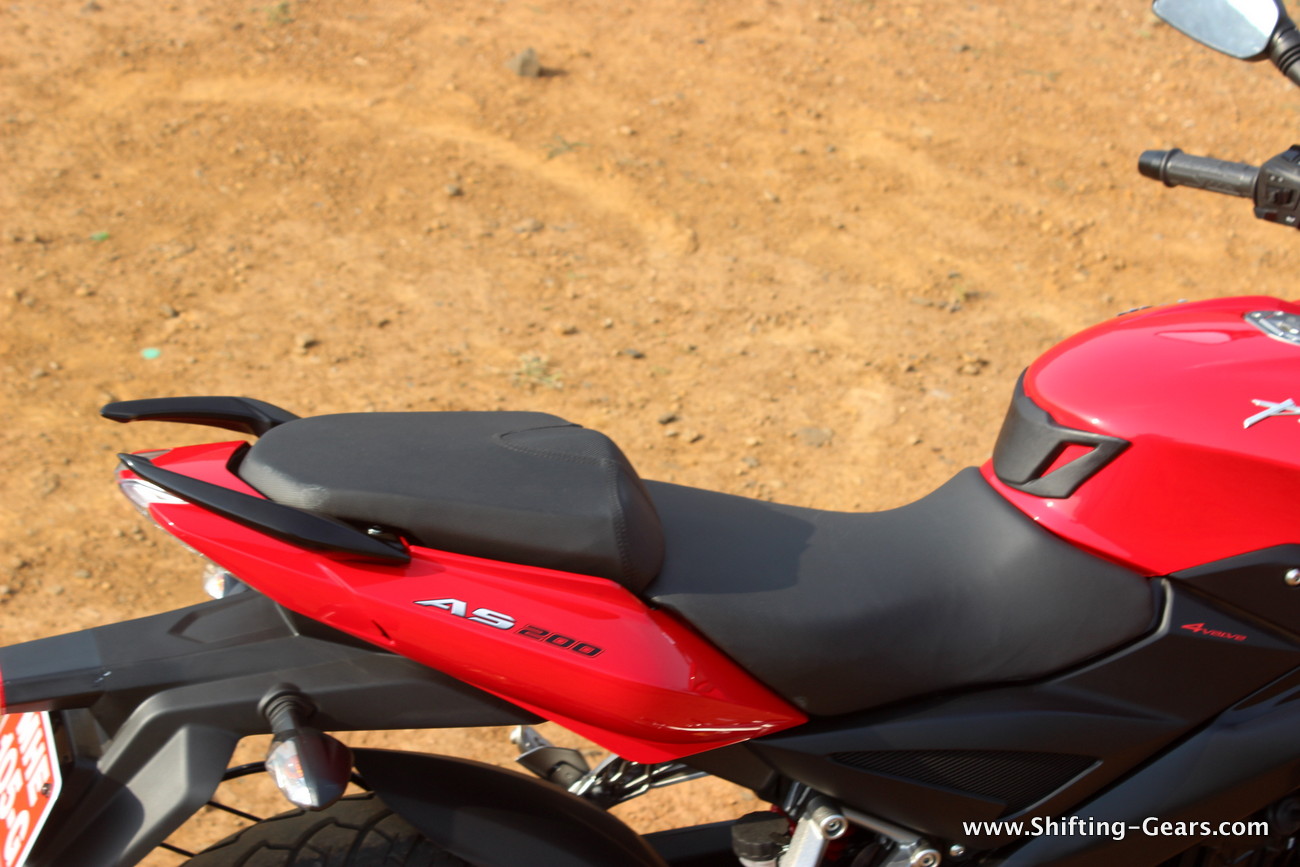 The AS200 is a good mix for riders of all age groups. The upright riding position will surely appeal to sedate and elderly riders while the rear set foot pegs & semi-fairing offer a sporty feel to attract the younger audience. 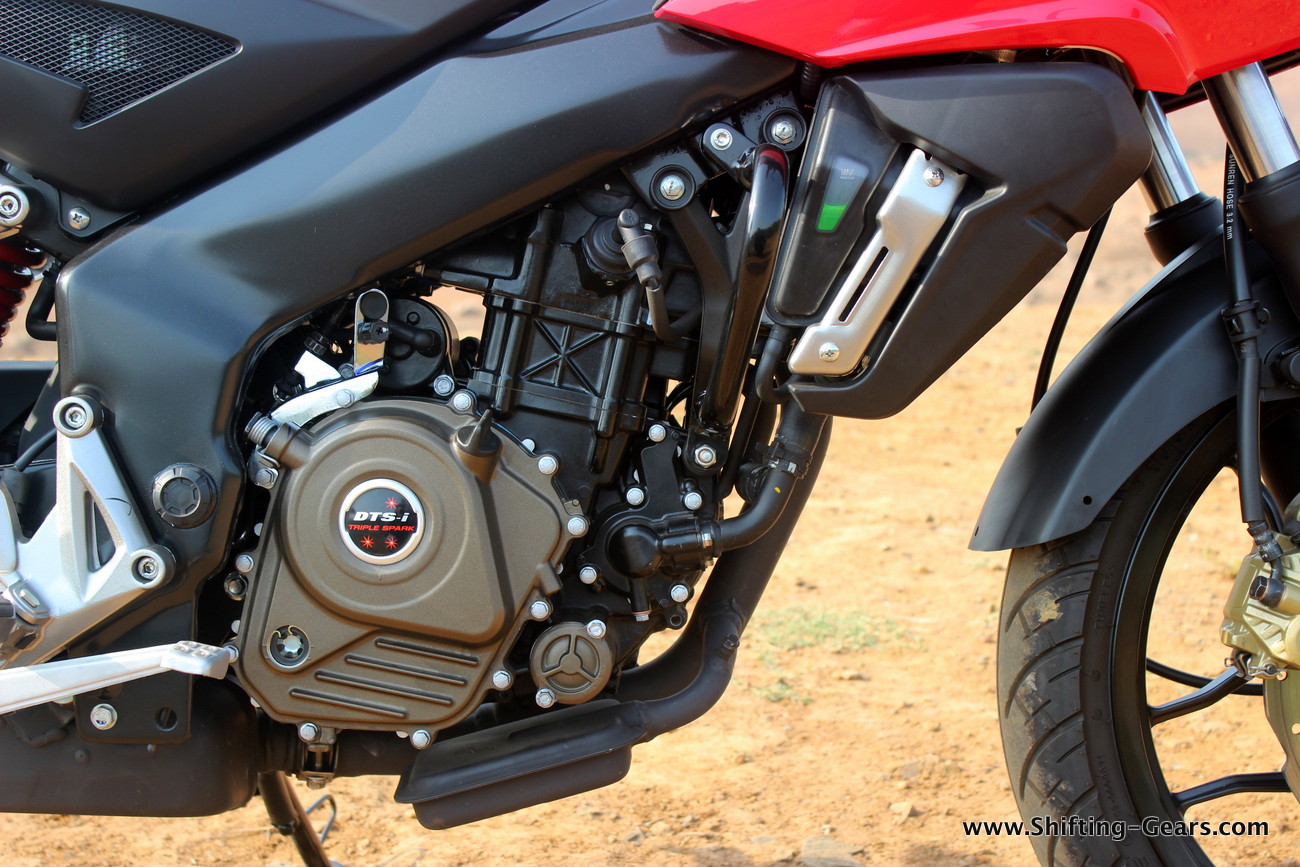 With the addition of semi-fairing on the AS200, the kerb weight has increased. But you do not feel the extra bulk during acceleration. The engine feels almost as peppy as on the naked sibling. Top speed however thanks to the semi-fairing would be marginally better with improved aerodynamics.

NVH levels are acceptable, but not as good as the Japanese rivals. Exhaust note – well, there’s nothing much to speak about it. We all know how these underbelly exhausts sound and the less we speak about them, the better. On idle, vibrations on the handlebar & foot pegs are well contained.

Slot it in first, and the bike pulls clean with little throttle input. The engine feels really smooth by Bajaj standards and marginally better than the 200NS as well. The bike feels peppy and throttle response is crisp. Power delivery is linear and the strong mid-range performance will really keep you happy. Power & torque availability lower down the revv range is acceptable, but one would need to downshift to make swift progress. If you compare the AS200 with the Pulsar 200 just because of similar styling; the difference between the engines is worlds apart. One could easily tell by the engine whine that a Pulsar was approaching, but the new generation engines are far more refined. With a ground clearance of 167mm, not only did the AS200 tackle speed breakers well, we even pushed in on unknown territory without scraping the bottom even once. This should definitely come in handy on broken Indian roads. 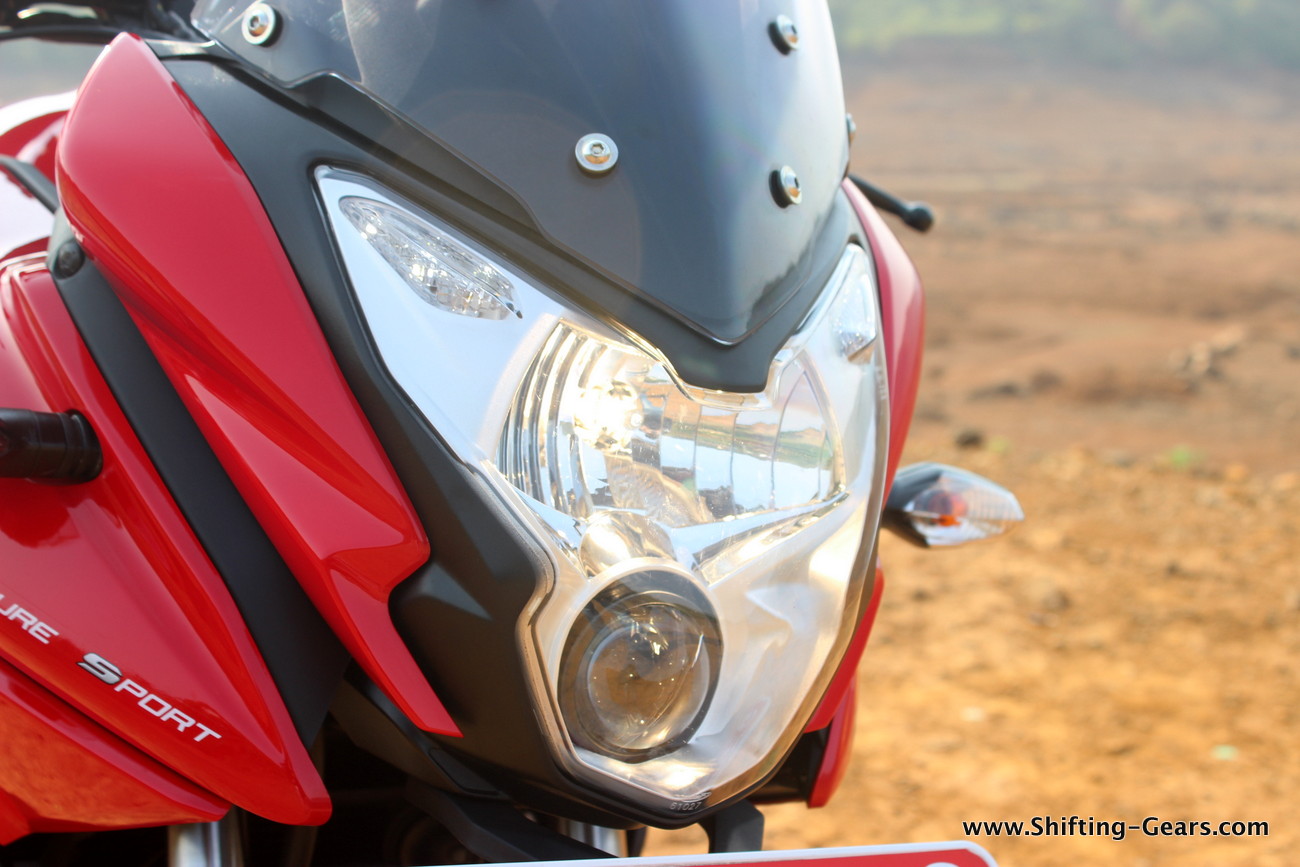 Out on the highway, the Pulsar AS200 delivers a decent amount of fun as well. With the engine redlining at 11,000 RPM, there is plenty to play around with the throttle. The engine / exhaust note gets vocal beyond 6,000 RPM and closer to the redline, some vibrations do creep in. You can easily achieve speeds over 100 kmph and the motor can maintain such cruising speeds as well. Thanks to the windscreen, windblast is also well controlled. At speeds, one can easily crouch and deflect the wind over their helmet with the help of the front windscreen. Power delivery tapers off once you climb over 120 kmph and progress beyond this is a bit slow. If you use the bikes on the highway often, the AS200 will keep you more happy than the 200NS.

Suspension setup on the AS200 is the same as the 200NS. There has been no retuning or tweaking of the suspension. The setup thus feels a bit on the stiffer side, just like the naked sibling. Riding comfort with just the rider is a bit jerky, but with two on board, the bumps are soaked better. The stiffer suspension however is ideal when pushing the bikes around your favourite corners. Combined, the ride quality is average and can meet your soft-roading demands well. The bike feels as nimble as the 200NS and is fun to play around with. Turn-ins are quick too. Although the bike sports the ‘Adventure’ tag, the suspension travel is not longer to be thrown around on rocky terrain. The bike feels stable at high speeds and will serve as a good touring companion. 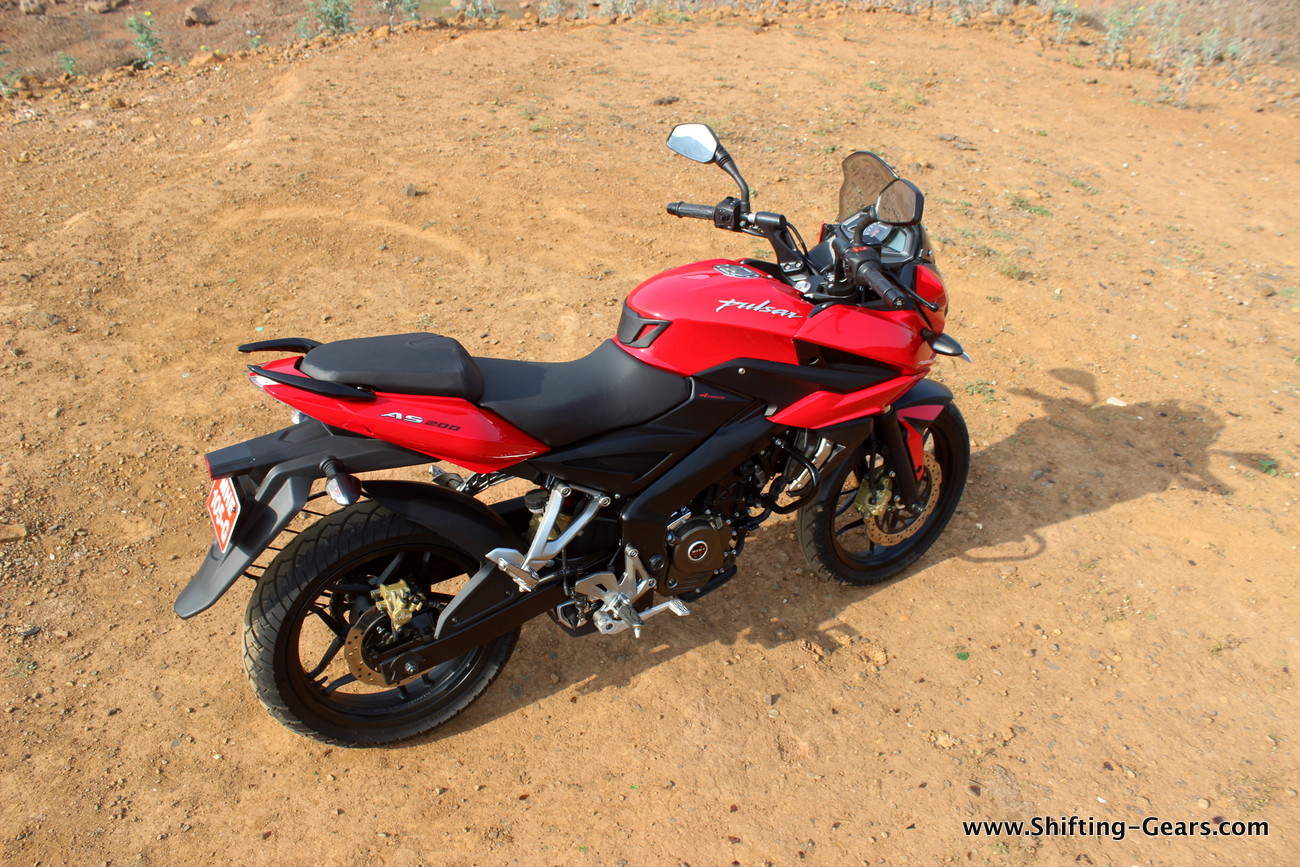 The disappointing bit comes from the tyres. The AS200 continues to make use of the TVS-sourced Eurogrip tyres which are far off the mark when providing confidence inspiring grip. The smaller sibling AS150 however gets more grippy MRF tyres. We were more at ease cornering on the AS150 than on the AS200 only because of these sub-par Eurogrip tyres. Braking performance is adequate and the front & rear disc offers good bite. Even after constant biting of the brakes, the brake-bite did not fade away. Better tyres would add that little bit extra to braking performance as well. 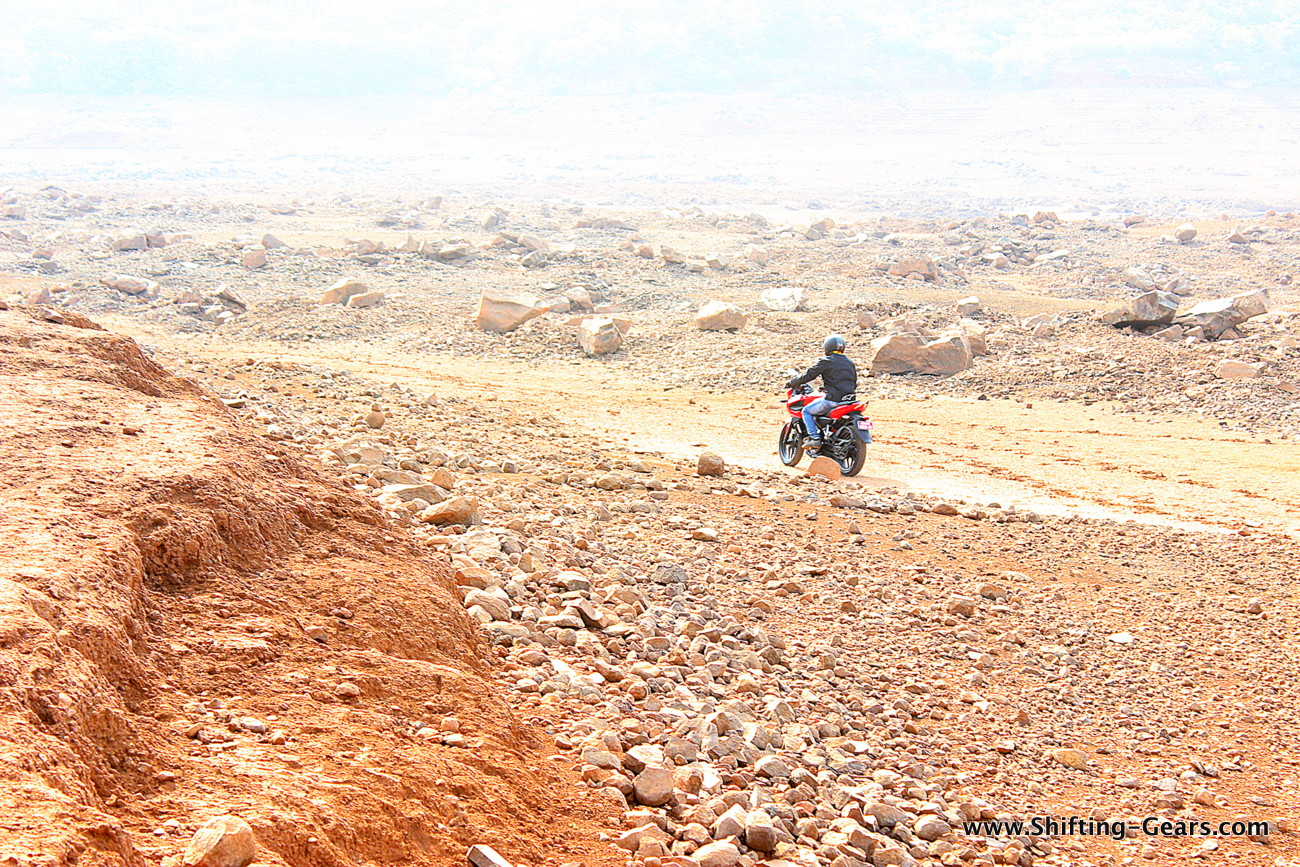 So if you’re looking for a less common 200cc motorcycle, the AS200 will surely fit your bill. Also, if you were considering the 200NS, we would recommend you at least give the AS200 a shot just for comparison. At the same price, we think the AS200 is better packaged than the naked sibling. At the given price, it offers the most value for money. If an affordable tourer is what you need, the Pulsar AS200 offers a relaxed riding position and is even relaxing on your budget.

Click here to check out the Bajaj Pulsar AS200 photo gallery.