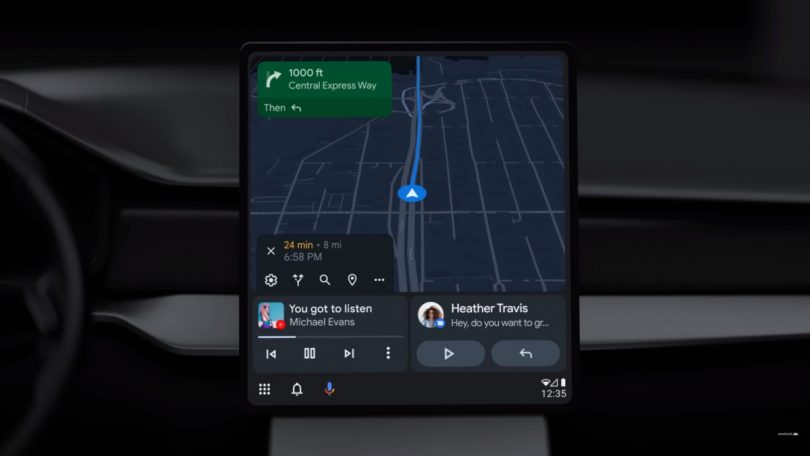 At the 2022 Google I/O conference, Google announced that Android Auto, its in-car smartphone connectivity interface, will get a big update. Google’s aim with this update is to make the software flexible and increase its usability. The update will most likely roll out in a phased manner in the coming months.

As of now, the main issue with Android Auto is the inconsistency across various screen shapes and sizes. Carmakers make different screen designs according to the interior of the respective cars. The screens may be landscape or portrait and also vary in aspect ratios. For example, a Land Rover Defender has a 4:3 screen, 9:16 in a Volvo XC60 and 16:9 in a Hyundai i20. Because of this, the split-screen function was also available only in a few vehicles.

However, with the new update, it won’t be a problem anymore. According to Google, with the latest update, Android Auto has the ability to scale and conform to any screen. This is regardless of the size or orientation. Furthermore, this also allows split-screen functionality in all the vehicles.

According to Google, the three most used aspects of Android Auto are – media controls, maps and messaging. Not specifically in that order, though. Because of this, Google will change the UI of Android Auto. The new UI will have shortcuts to these three functions. The user will have the three options on the screen all the time. Furthermore, users can tap on any one of them to expand it for more options. At the same time, Android Auto gets a visual update as well. The new look and the overall layout draw inspiration from Android’s latest ‘Material Design’ theme.