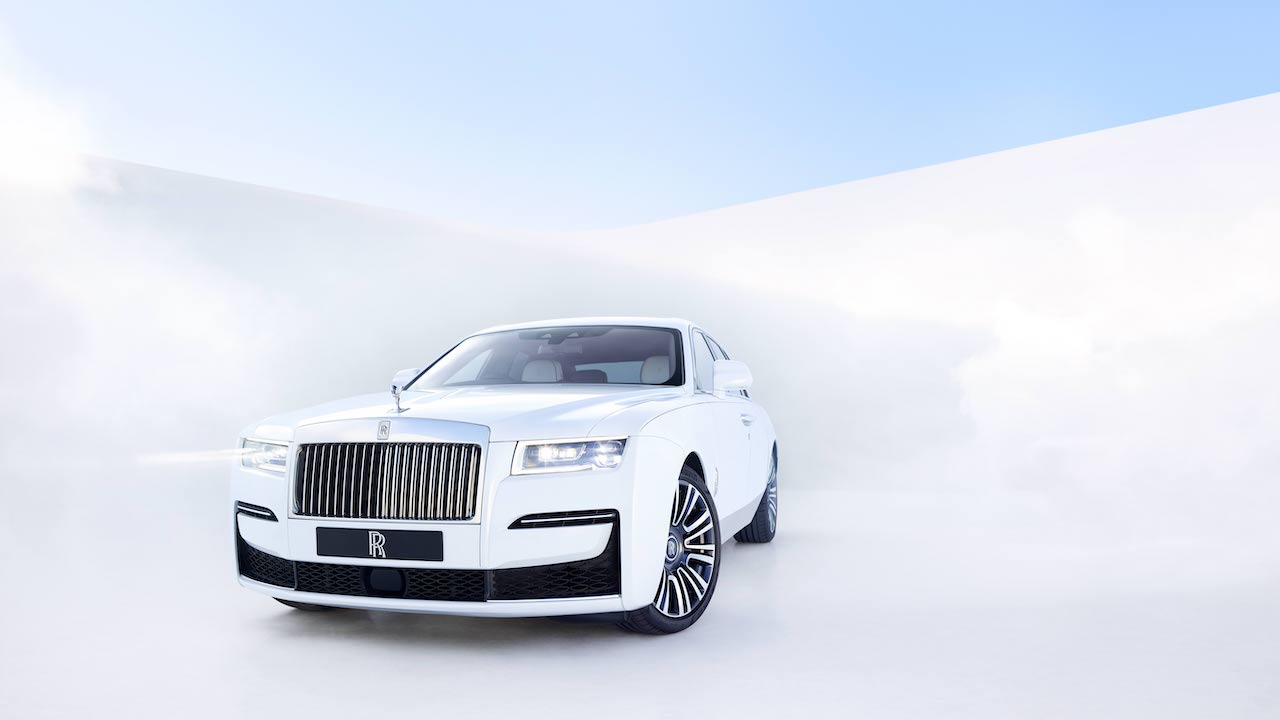 After a long-running teaser campaign, Rolls-Royce has finally unveiled the next-generation 2021 Rolls-Royce Ghost that comes with a number of revolutionary features tapping into significant engineering advances all while retaining Goodwood’s timeless design philosophy, ensuring that the British marquee meets all the expectations of its bespoke clientele and is the result of over two years of development with a collective of countless hours of work.

The Rolls-Royce Ghost entered the market back in 2009, positioned under the brand’s flagship, the Rolls Royce Phantom, bringing the customer’s the best of both world’s. The Rolls-Royce Ghost creates a perfect harmony by offering its customer’s an impeccable chauffeur-driven experience as well as the pleasure of driving the luxury motor car by themselves.

The Rolls-Royce Ghost is based on the same aluminium spaceframe chassis like the Rolls-Royce Phantom and the Cullinan and is a result of direct feedback from Rolls-Royce clients, a collective of business leaders, founders and entrepreneurs, who requested that Rolls Royce deliver a motor car that they could use more which is both refined to be driven in and even more enjoyable to drive.

The next-generation Ghost comes with innovative features such as the new highly advanced and world-first Planar Suspension System which comprises of three main elements – an Upper Wishbone Damper unit, mounted above the front suspension assembly, the second Flagbearer system, which uses cameras to read the road ahead and prepare the suspension system for any changes in the road surface ahead and a third Satellite Aided Transmission, which draws GPS data to pre-select the optimum gear for upcoming corners. The system further evolves the Rolls-Royce’s double-wishbone Magic Carpet Ride suspension system and includes self-levelling, high-volume air suspension technology. New technologies for the 2021 Ghost also include and all-wheel steering, all-wheel drive, seld drying braking system and stability control.

On the outside, the 2021 ghost is larger than the predecessor and its overall length has grown by 89mm, compared to the first Goodwood Ghost, to 5546mm, and its overall width has grown by 30mm to 1978mm. The luxury motor car looks familiar but comes with distinguishing features such as a new illuminated Pantheon grille with 20 LEDs that subtly glow the vertical vanes, new LED and Laser headlight and new taillights.

Apart from the bespoke materials – leathers, woods and unembellished metals, on the inside, the brand has gone through extreme engineering lengths to ensure that the interior components tuned to specific resonant frequency to create a sense of calmness. For example, Rolls-Royce polished out the air-conditioning ducts to produce less sound. The 2021 Ghost comes with an upright dashboard fascia imposed with an innovative Illuminated Fascia featuring the ‘Ghost’ nameplate surrounded by more than 850 stars painstakingly created using 152 LEDs mounted above and beneath the fascia featuring more than 90,000 laser-etched dots across the surface and lit evenly using a 2 millimetre-thick light guide. This not only disperses the light evenly but creates a twinkling effect as the eyes move across the fascia, reverberating with the hallmark Starlight Headliner. The new Ghost gets self-closing doors but the doors also feature power assistance while opening with the pull of the handle. The Ghost also comes with Micro-Environment Purification System and Bespoke 18 channel Audio system.

The Rolls-Royce Ghost is powered by a 6.75-litre twin-turbocharged V12 petrol engine that generates 571 PS of power and 850 Nm of torque at only 1600 RPMs matched to a ZF 8HP90 8-speed automatic transmission that can propel the two and a half tonne vehicle to an electronically limited top speed of 250 kmph. The Ghost can sprint from a standstill to 100 kmph in just 4.8 seconds. Two of the cast suspension mounting assemblies were pushed to the very front of new Ghost, placing its motor behind the front axle to achieve an optimum 50/50 weight distribution. The moveable aluminium bulkhead, floor, crossmembers and sill panels were positioned specifically to ensure new Ghost is enjoyable to drive as well as to be driven in.

The Rolls Royce Ghost most technologically advanced Rolls-Royce yet. The Goodwood Ghost boasts to be the brand’s bestseller since it was launched back in 2009 and is revered to be the marquee’s most successful vehicle in its 116 years of history. 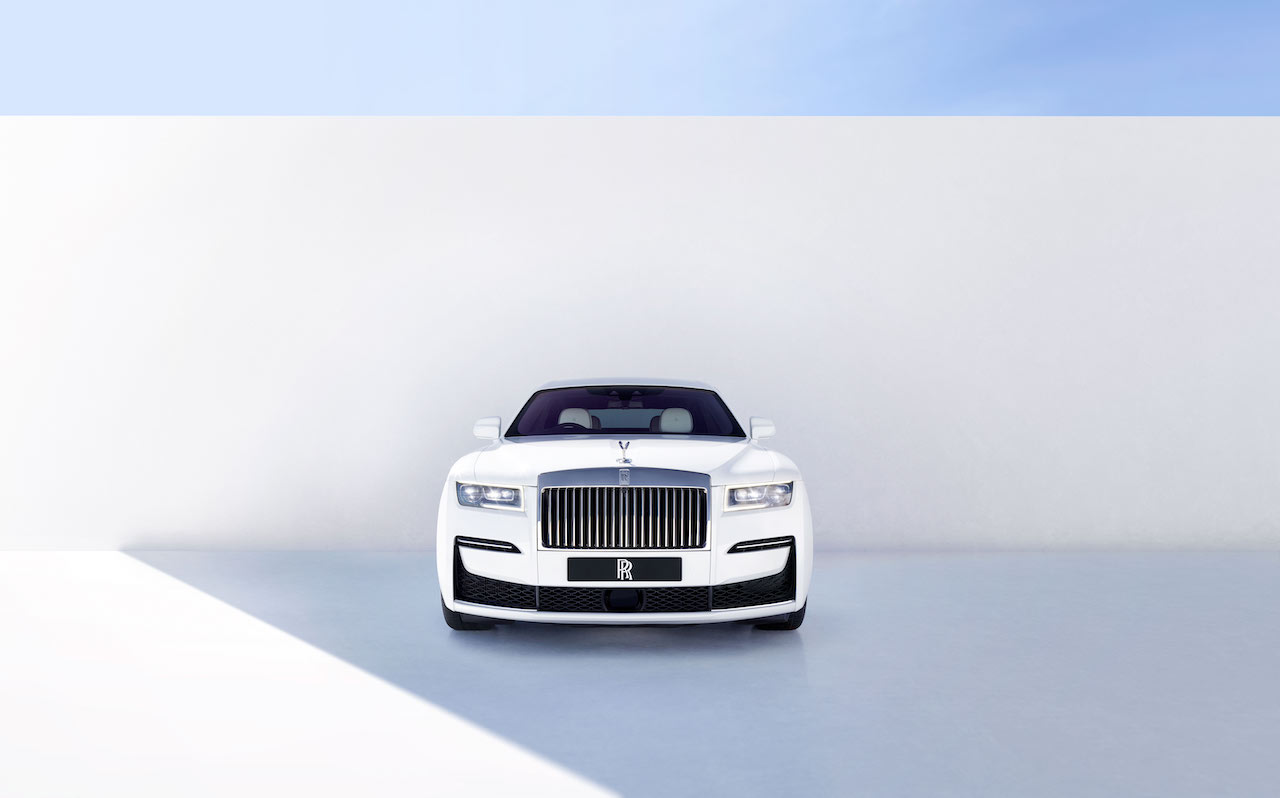 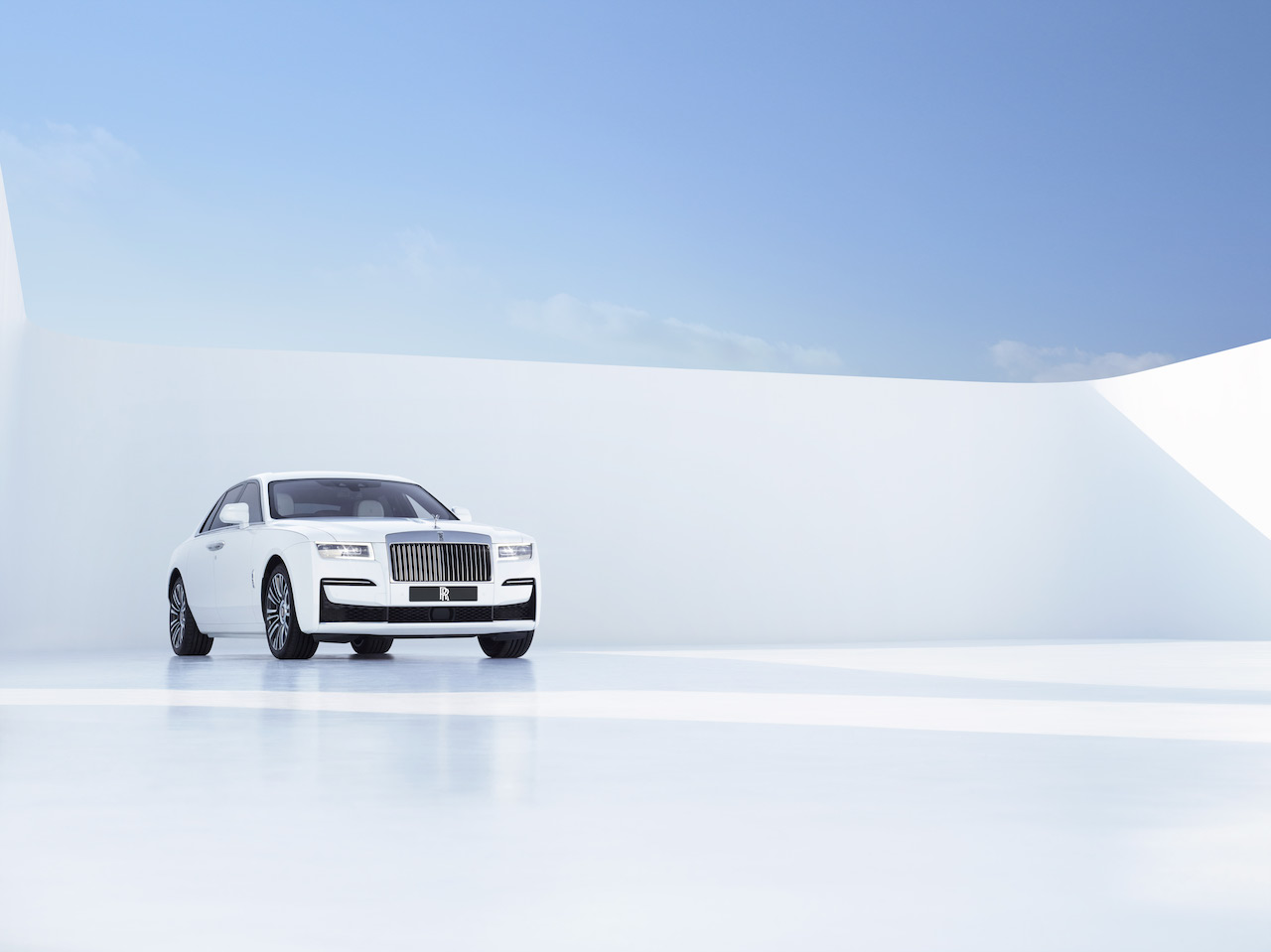 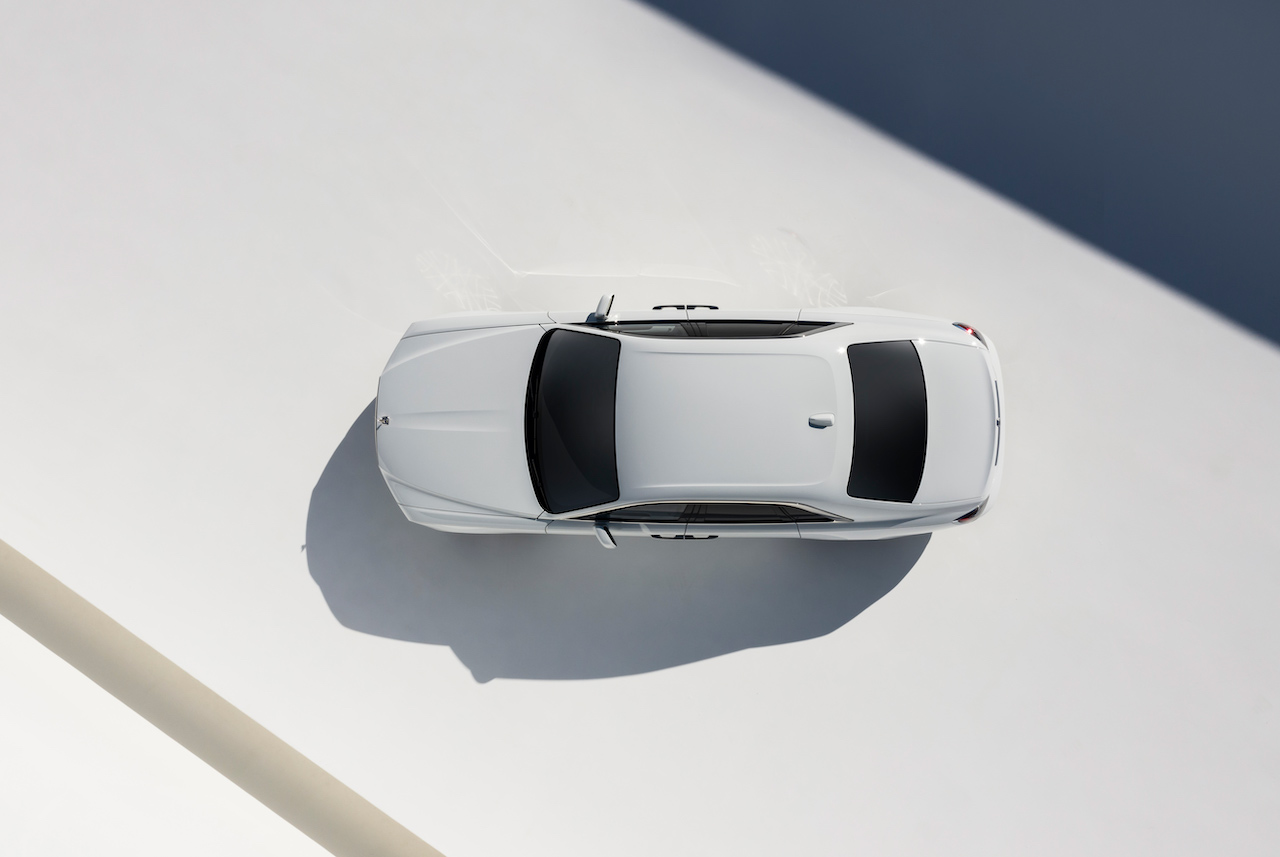 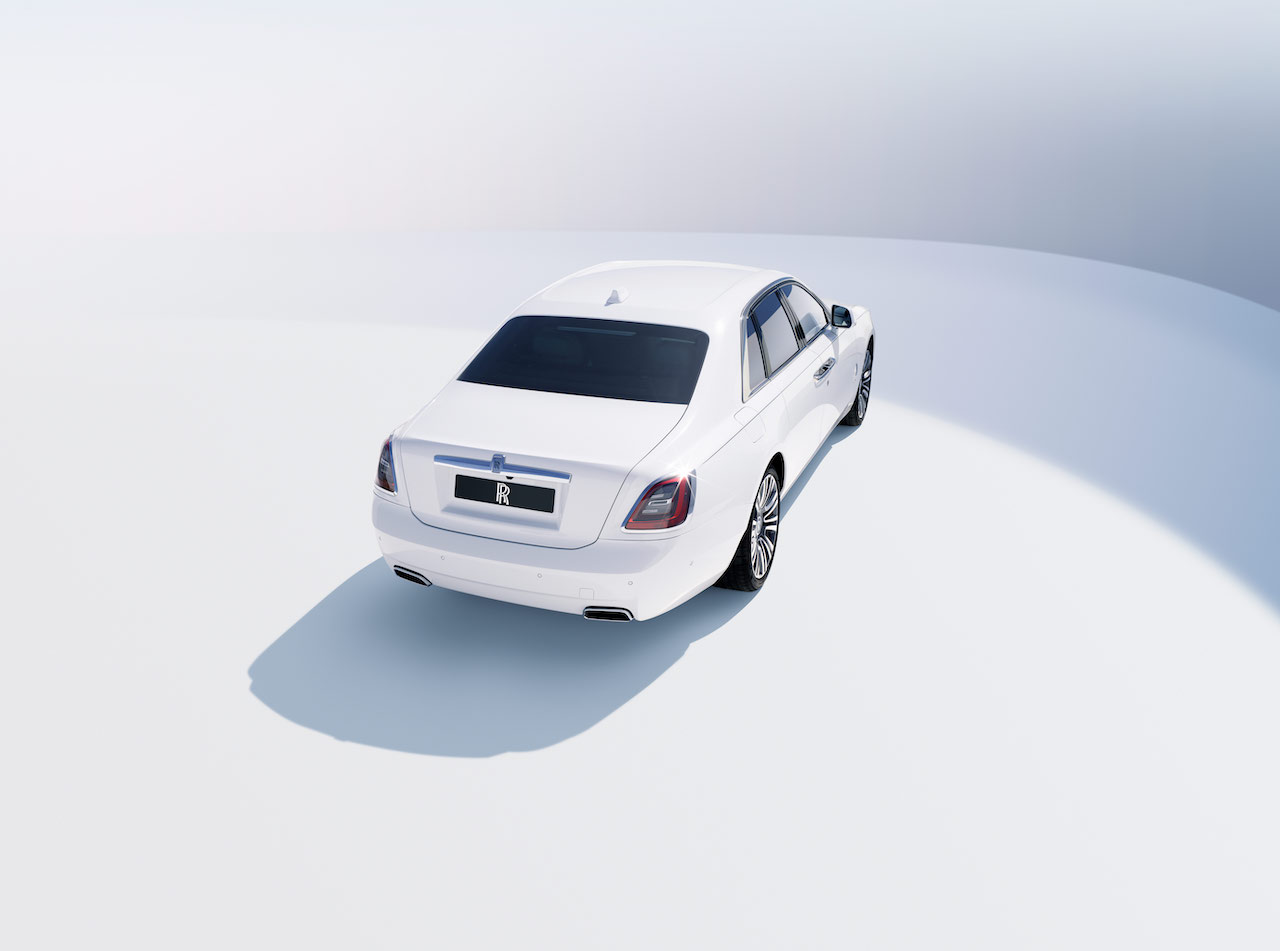 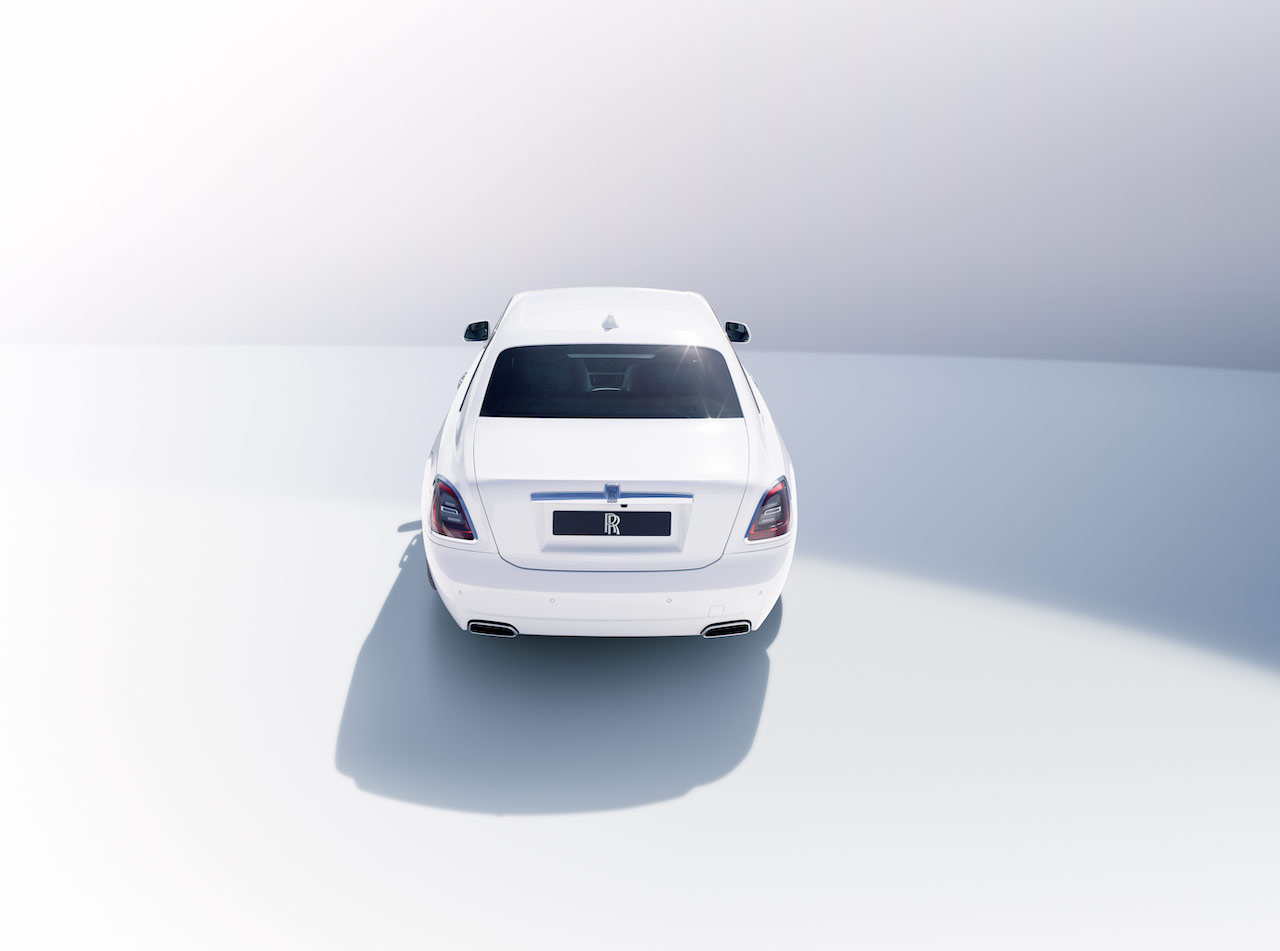 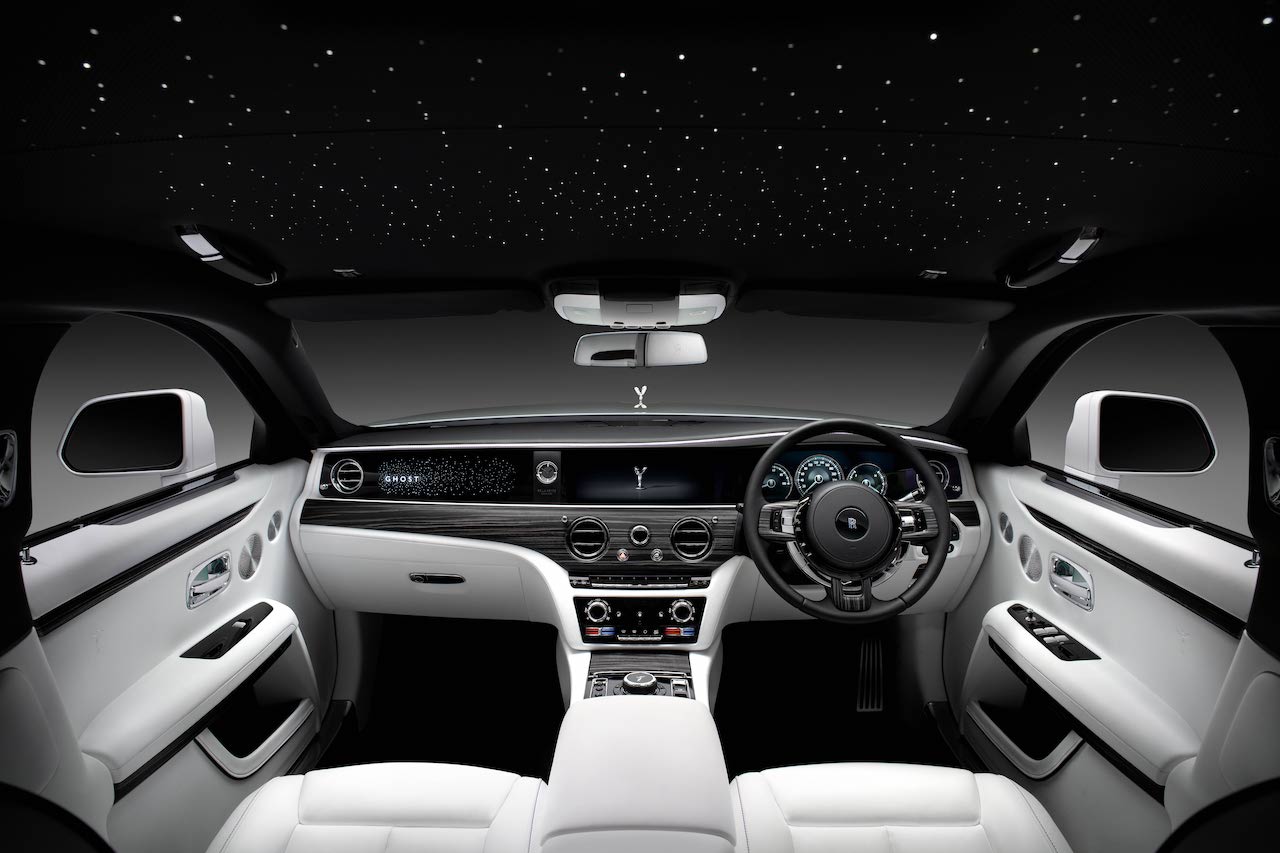 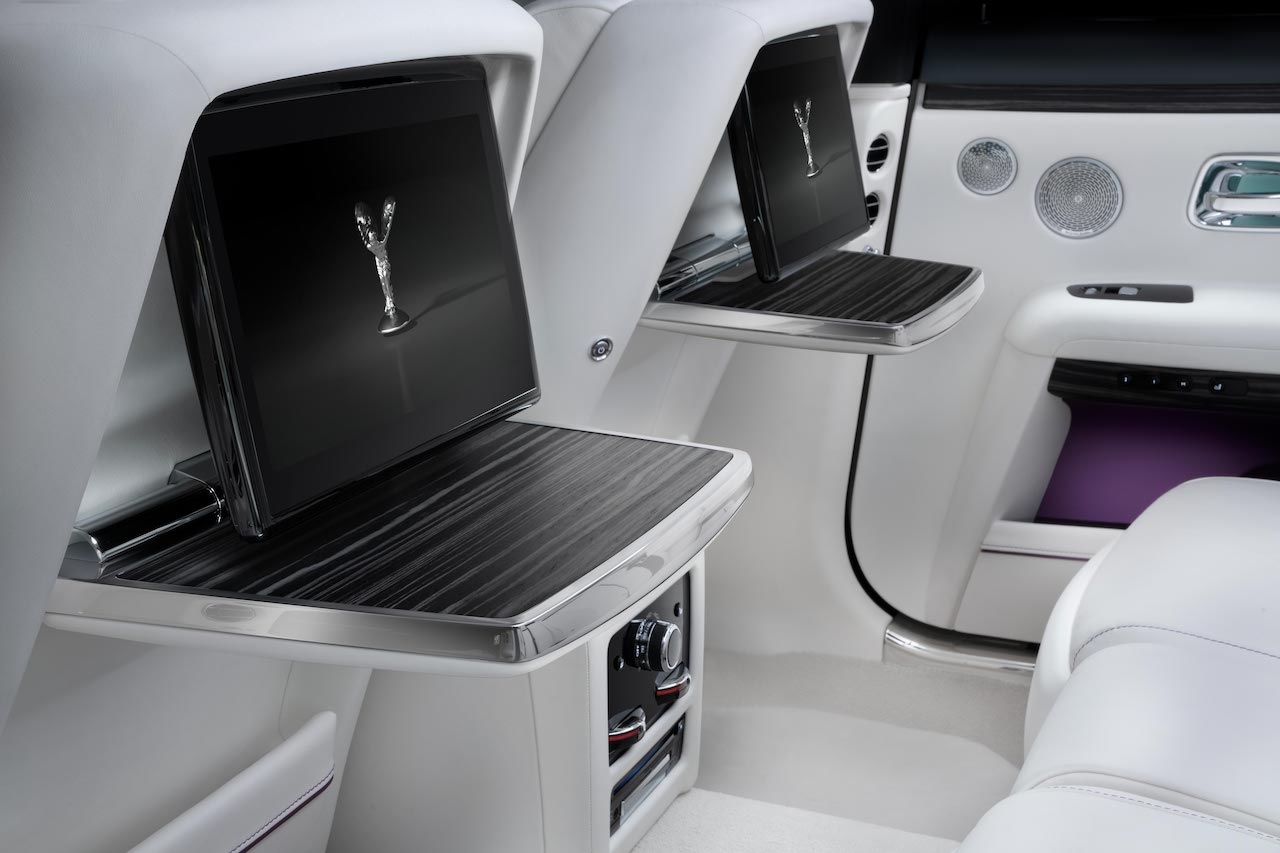 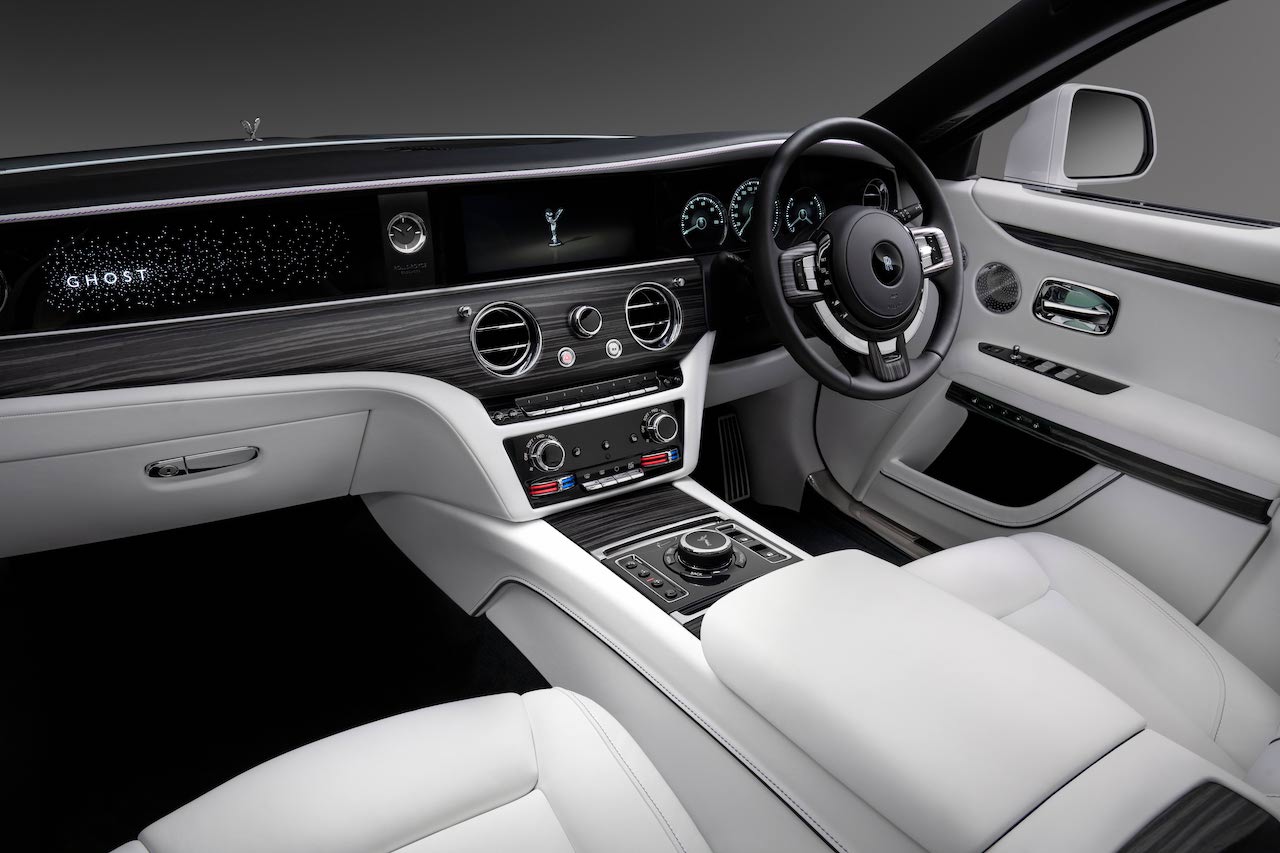 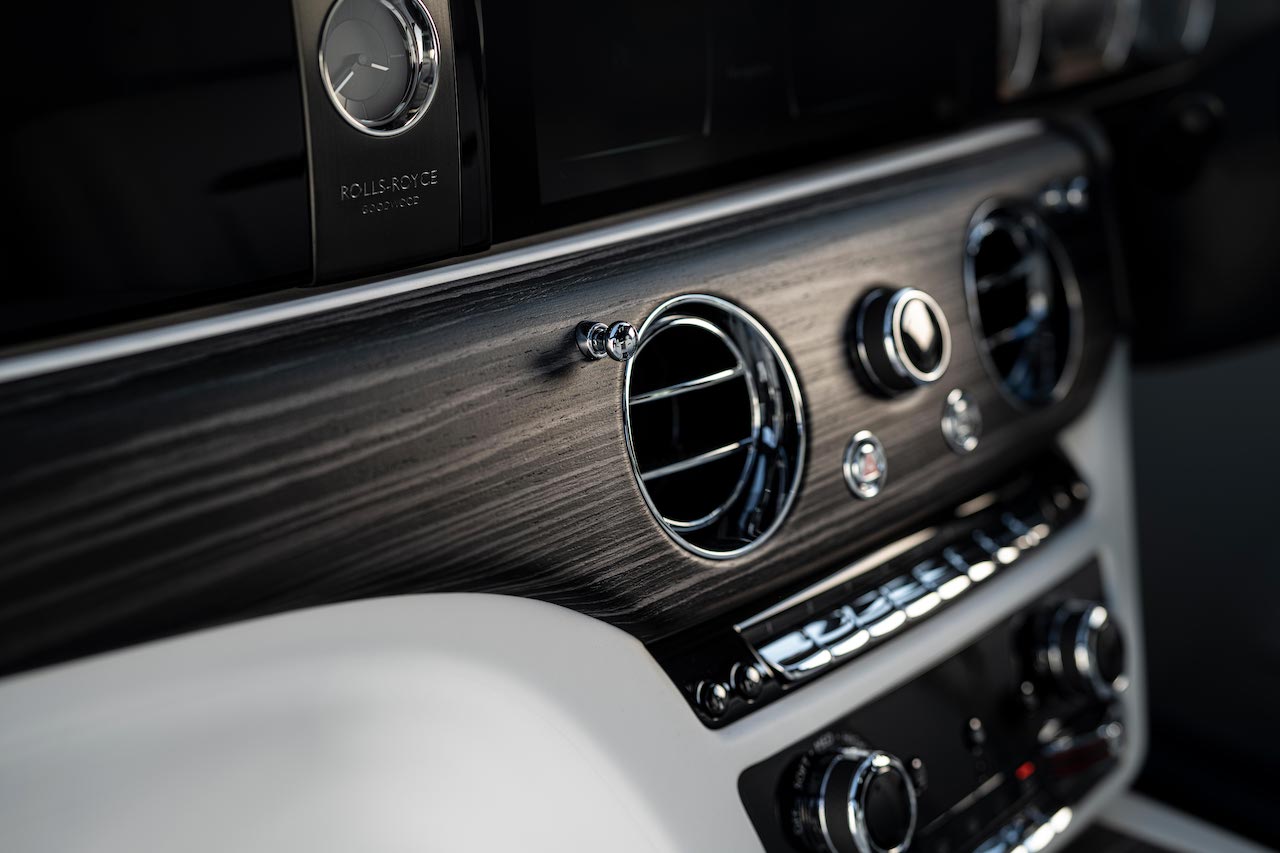 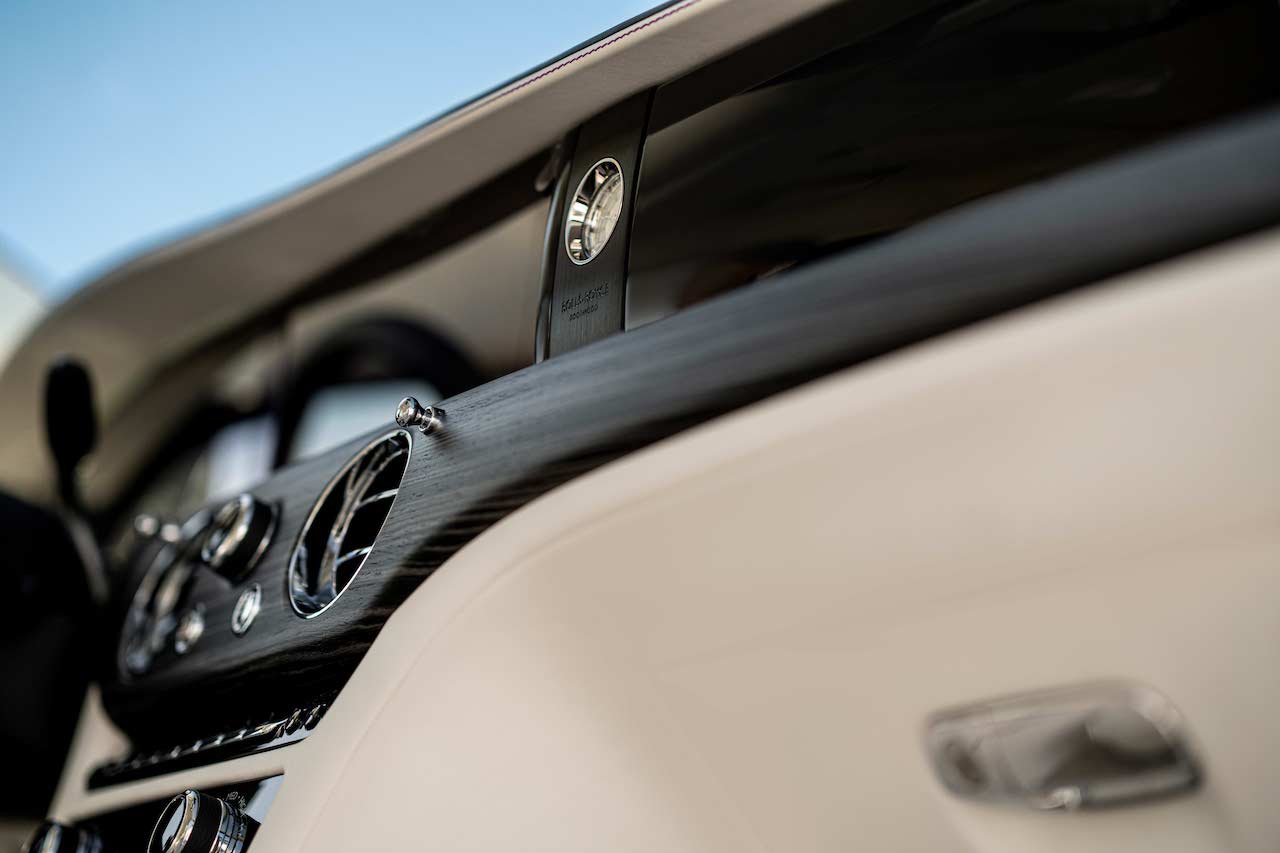