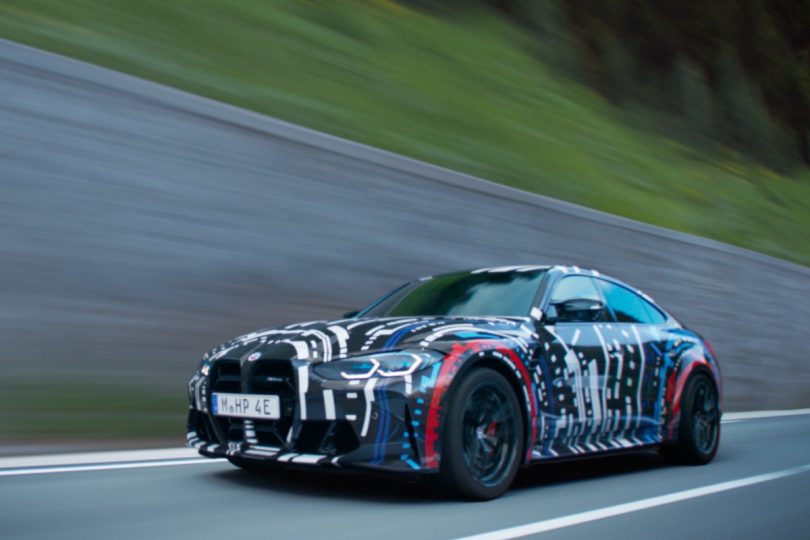 As a part of BMW M’s 50th-anniversary celebrations, the brand has announced that it is working on new fully electric powertrains. The brand has also released a teaser video which shows a prototype sporting this powertrain. In its anniversary year, BMW has already released the BMW i4 M50 and the iX M60. Furthermore, BMW also showcased the i7 M70, which is the first BMW M car to use an all-electric luxury sedan as its base. However, the i7 M70 won’t arrive until next year.

The new purely electric performance coupe uses the BMW i4 M50 as its base. However, BMW modified the body to align with BMW M design traits. It also gets wider wheel arches, enabling BMW to integrate new high-performance front and rear axle designs. At the front, the prototype uses the face of the ICE-powered M4. We can also see the model sporting a special livery. The teaser video also shows the prototype making a ‘tank-turn’. However, it looks like CGI.

The more important changes are under the body. With the prototype, BMW is debuting its electric M xDrive four-wheel-drive system with four electric motors. It also features an integrated driving control system. BMW says the fact that an electric motor drives each wheel opens up new possibilities. It allows it to have an infinitely variable, precise, fast distribution of drive torque. The brand said it has also modified the suspension, and it gets the same front struts as the M3/M4, which results in higher torsional rigidity.

BMW has not revealed any performance output figures for the quad-motor EV prototype. But since the brand claims it will have an “unprecedented level of performance”, expect them to be much higher than the i4 M50. For reference, the i4 M50, which BMW has also shown in the video, uses a dual-motor setup and makes 544 PS and 795 Nm of torque. As of now, it is uncertain whether this quad-motor i4 will make it to production. But if it does not, the technology BMW showcased will likely find its way into future M models.

Also Read: New BMW M2 will be a race car for the road