ABS or Anti-Locking Braking System, is a very well known entity in the automotive world. This technology used to be very rare and only came with high-end bikes, but, thanks to the growing technology and competition and even concern towards the safety of people, manufacturers are introducing this feature even in lower segment cars and motorcycles. TVS Apache 180 RTR is the ‘cheapest’ offerings in terms of OEM fitted dual-channel ABS system. The Indian government is ready to pass a law of making ABS mandatory for every motorcycle from 2017.

What is an ABS? 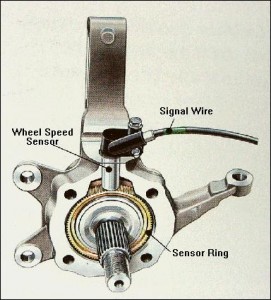 Anti-Lock Braking System basically refers to the technology of effective braking of a vehicle by using a hydraulic regulator that doesn’t let the wheels get locked in case of emergency braking. It is a very complex system which is based mainly upon working from a sensor that senses the speed and rotation of disc continuously while the vehicle is on the move. As the rider applies brakes the sensor sending continuous signal leads to the ECU (Electronic Control Unit) of the braking system where an algorithmic calculation takes place and leads to further release of pressure from a hydraulic regulator present between the ECU and the brake caliper. In short motorcycle ABS works by constantly measuring wheel speed with the help of sensors attached and adjusts the brake fluid pressure. This, is the working of an electronic ABS which are mainly fitted in premium motorcycles.

During a normal ride, the rider wouldn’t notice all these complexities of the functioning of various components involved in the ABS system. However in an emergency braking situation which is otherwise panic braking, one can be confident that the wheels wouldn’t lock up giving the rider a taste of the tarmac. 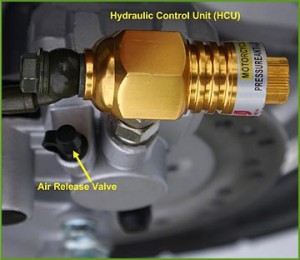 Also available are mechanical ABS which are less precise but also cheap in costs and affordable. The difference in working is very simple and they only use a mechanical hydraulic regulator placed between the brake lever and the brake caliper hosing. The amount of the brake force applied by the user is then varied by the regulator, thus, regulating the hydraulic fluid pressure needed and hence help in anti-locking of brakes.

Talking of aftermarket ABS, sadly, there are a very few available in the Indian market. Because of the lack of manufacturers of ABS and also the lack of knowledge by mechanics and less powerful production bikes, majority of international ABS makers stay away from the Indian market. But, there are some mechanical ABS copies available from Chinese market that might help. We suggest you to avoid that. Buying a motorcycle or car that comes fitted with an OEM ABS is the best solution for safety of you. In case you have brought yourselves an aftermarket ABS please visit a knowledgeable mechanic or the service station for getting it fixed. If you are trying to do it by yourself please do take care that there are no air bubbles left over in the hydraulic regulator chamber while installing. This might produce a reverse affect with jerks and can prove dangerous.

Deploying an ABS is a very complex task and it better be left over to the manufacturers, but, in a nutshell what most of us can do is try to increase our budget and then buy a vehicle equipped with ABS tech. With the new law on shores, soon, ABS would become more cheap and mandatory thus making travel more safe.