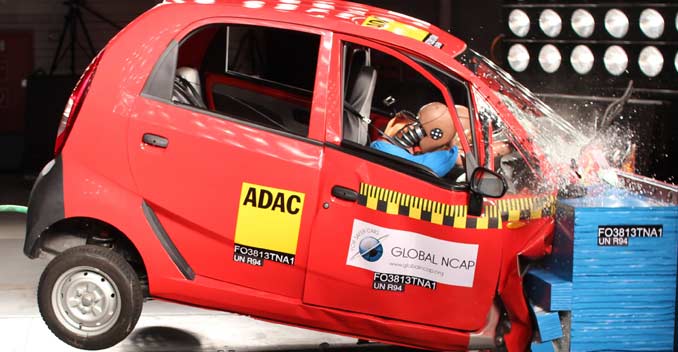 After all the hoopla post the crash test results of the Maruti Suzuki Swift which scored a 0 star rating; some amends to the system were bound to happen. Not much for the better, but for cover-up.

Now, the Ministry of Road Transport and Highways has announced that all new cars in India will have to undergo frontal crash tests from October 2015. The speed set for these crash tests is 56 kmph, lower than the 64 kmph speed of NCAP. We don’t know why the government refused to accept the global standard and is trying to reinvent the wheel in this case by creating new benchmarks. Also, going slower by 8 kmph is now going to change results from 0 stars to 5 stars anyway.

The Bharat New Vehicle Safety Assessment Programme (BNVSAP) will allow manufacturers to test their vehicles beyond the necessary safety law, and later, safety ratings will be given to each cars similar to Global NCAP.

Two things emerge out of this decision. One, that the government is taking road safety seriously and with these tests becoming mandatory; passenger safety will surely be looked upon. Two, on the other hand, it shows the amount of influence certain manufacturers have in these situations to escape and create a much more convenient law, where they can pass.