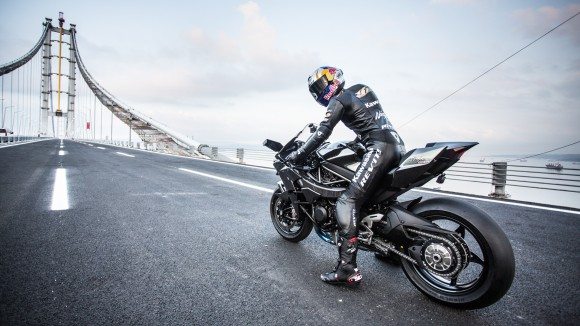 The Kawasaki Ninja H2R, which was launched only last year is probably the best every supersport motorcycle ever built with the best & latest technology. The bike is powered by a 998cc, four-cylinder, supercharged engine, which delivers peak power of 300 HP, making it twice as powerful as any street legal bike. The claimed top speed of the bike is 380 kmph, but only a speed of 348.2 km was recorded last year on an empty runway.

Kenan Sofuoglu, 31-year-old Turkish professional racer, gets behind the Ninja H2R in an attempt to set a new top speed record – 400 kmph. The racer had to undergo training to attain a speed of 400kmph in under 30 seconds as after that the tyres would give way.

Also, a fairly long stretch of road would be required. The team found a road 50 kms away from Istanbul, a new bridge across the Gulf of Izmit. An early morning attempt would be their best chance to reach that speed.

Watch his attempt below: