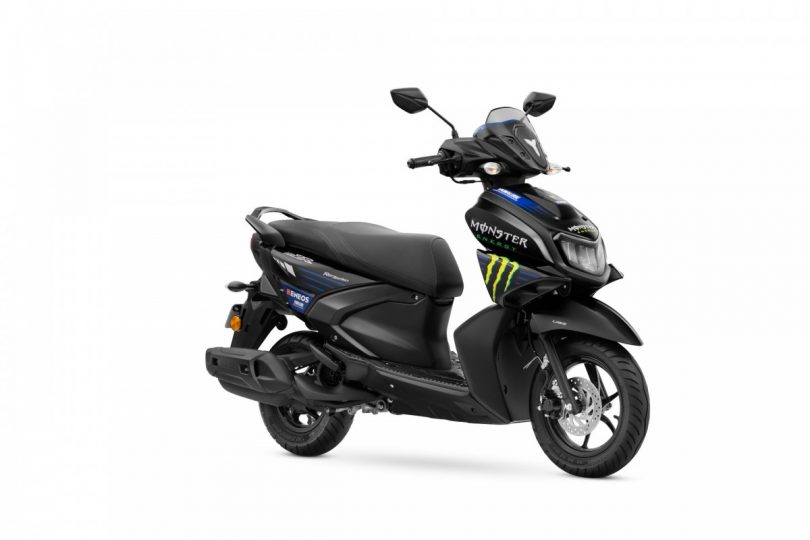 Under the initiative of ‘The Call of the Blue’, India Yamaha Motor Pvt. Ltd. today introduced its 2022 Monster Energy Yamaha MotoGP Edition models. Under this, the motorcycle maker has announced four models. This includes the Supersport YZF-R15M, the Dark Warrior MT-15 V2.0, the sports maxi-scooter AEROX 155 and the RayZR 125 Fi Hybrid scooter. Yamaha has confirmed that customers can experience the Monster Energy Yamaha MotoGP Edition model range at all the premium Blue Square outlets in India. In the recent few months, Yamaha has been quite active in expanding its network. The motorcycle has been adding its Blue Square to more and more cities so as to attract more engagement, thus boosting sales.

In the motorcycle model range for this MotoGP edition, we have the YZF-R15M and MT-15 V2.0. Both these titles showcase the Yamaha MotoGP branding on the tank shrouds, the fuel tank and side panels. All these differentials resonate perfectly with Yamaha’s Racing background. The AEROX 155 and the RayZR make up for the scooter segment as a part of the Monster Energy Yamaha MotoGP Edition. Both these vehicles get MotoGP branding on the overall body.

Yamaha has been quite committed to offering two-wheelers that live up to the global spirit of Yamaha Racing. And additions like these further assert the above fact. Yamaha has also confirmed that it will continue to offer MotoGP-inspired Editions in the future as well.

Powering the scooter is a BS6-compliant 125cc, single-cylinder, air-cooled, fuel injected (Fi) engine. The engine output reads as 8bhp of maximum power at 6,500rpm and 10.3Nm of peak torque at 5,000rpm. As the name suggests, Ray ZR also uses a Smart motor generator (SMG) that plays the role of Hybrid power assist. This results in a quieter engine start and also produces a power output which is 30 per cent and 16 per cent higher fuel economy compared to the earlier 113 cc scooter.

Customers have two variants to choose from, namely, Drum and Disc. As per 2022 standards, the Ray ZR benefits from a host of features. This includes Smart Motor Generator (SMG) System and Automatic Stop and Start System. The engine also gets a Quiet Engine Start System, and the brakes have a Unified Brake System (UBS). For safety, it also comes with a Side Stand Engine Cut-off function. For the MotoGP Edition, Yamaha has put on a sticker price of INR 87,330 (ex-showroom).