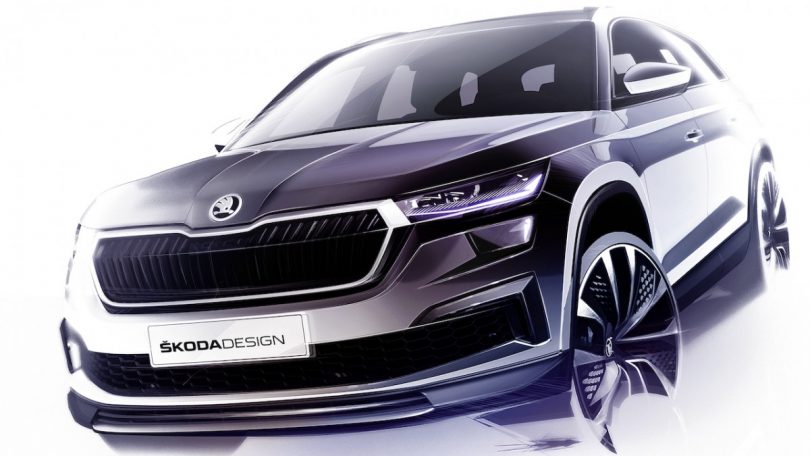 Skoda in the international market is busy upgrading the brand’s flagship SUV the Skoda Kodiaq. The Kodiaq is due a mid-life update and the brand will be revealing the facelift avatar of the Kodiaq on 13th April 2021. But before its scheduled unveiling, the brand has sent us a few design sketches, revealing the headlamp design, tail lamp design and the front three-quarter of the SUV.

The Skoda Kodiaq facelift comes with a new design refresh on its front fascia as well as its taillamps. Starting with the grille which is now a sharper much hexagonal unit and in-line with the brand’s latest design language. The grille features double vertically oriented slats, a reprofiled bonnet with a Skoda emblem in the centre, a hallmark Skoda spine in the centre, character lines and a clamshell design. The lower air intake is also new and wide with L-shaped elements flanking both ends and a sharp splitter style bumper lip. The headlamp units are much sleeker than before and come with a fog light mounted under the headlamps giving the fascia a signature Skoda four-eyed look.

The headlamp cluster consists of two LED modules stacked on one another and creates a characteristic light signature. The outer ends are swept up enhancing the sharpness of the light clusters. The headlight clusters also integrate LED daytime running lights within the main unit. The tail lamps have a sharp profile to them and a flatter form of C-shaped design. The lights consist of sharp angles as well as signature crystalline structures.

What Do Spyshots Reveal?

Skoda has been testing the Kodiaq facelift in the international market and spy shots reveal Skoda lettering on the tailgate instead of a badge, a slightly larger roof-mounted spoiler and reworked bumpers. While spy shots of the interiors are scarce, speculations are that the updates mostly cover the central infotainment system and the instruments cluster as well as the upholstery. The basic layout of the dashboard is likely to remain the same.

Skoda’s Director – Sales, Service & Marketing, Zac Hollis revealed through social media that the brand’s third launch will be the Skoda Kodiaq facelift. The first launch this year is the new Octavia, followed by the launch of the Kushaq SUV and then the Kodiaq facelift. Zac also revealed that the Kodiaq will come with a 2.0-litre TSI engine when it arrives in the Indian market.