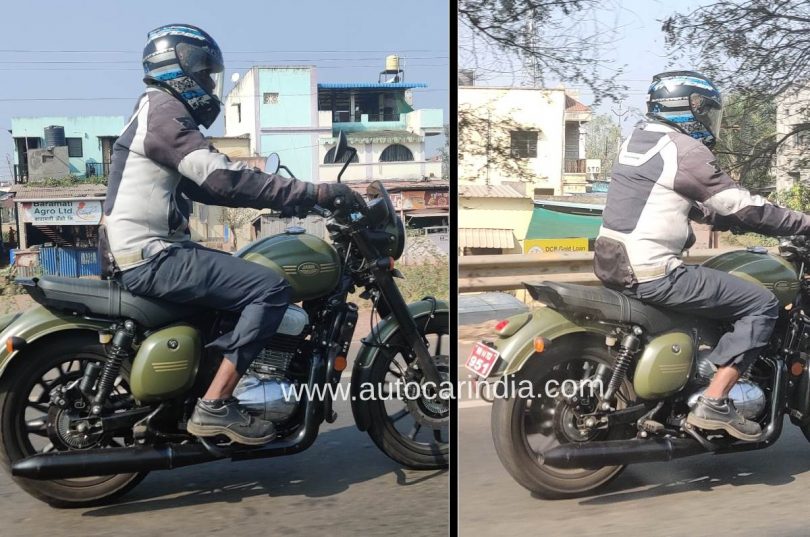 A new Jawa iteration has been spotted testing in India. The Jawa appears to be Forty-Two with new alloy wheels and blacked-out parts as well as some accessories. As of now, it is unclear if the brand will be replacing the existing model with the new updated model or the Forty-Two with alloy wheels will be an additional model sold alongside the standard.

The test mule appears to get multispoke alloy wheels finished in black and chances are that the new model with the alloy wheels will come with tubeless tyres. Currently, the Jawa Forty-Two comes with 18-inch front and 17-inch rear spoke-wire steel rims shod in 90/90 front and 120/80 rear tyres. The alloy wheel option is likely to come in the same size.

Apart from the wheels, the test mule also appears to be equipped with blacked-out parts such as the trim around the headlamp area and the pea-shooter exhaust which were all done in chrome before. The pillion grab rail on the motorcycle also appears different than what is provided on the standard version. Also, the seat upholstery appears to have been upgraded and the motorcycle also comes with a small flyscreen. The test mule is the rear disc brake variant and hence a brake oil reservoir can be seen mounted to the frame close to the rear suspension.

Mechanically, the test mule does not appear to come with any changes. The motorcycle is expected to come with the same BS6 compliant 293cc, liquid-cooled single-cylinder, four-stroke, DOHC engine with cross port technology and fuel injection that churns out 27 Bhp of power and 28 Nm of torque matched to a constant-mesh 6-speed gearbox. Other hardware is also expected to be carried over such as the double-cradle frame, hydraulic front fork suspension and dual hydraulic shock with a gas canister.

As of now, it is unclear when the motorcycle will be launched but the test mule appears to a production-ready version and the introduction is likely to happen soon.