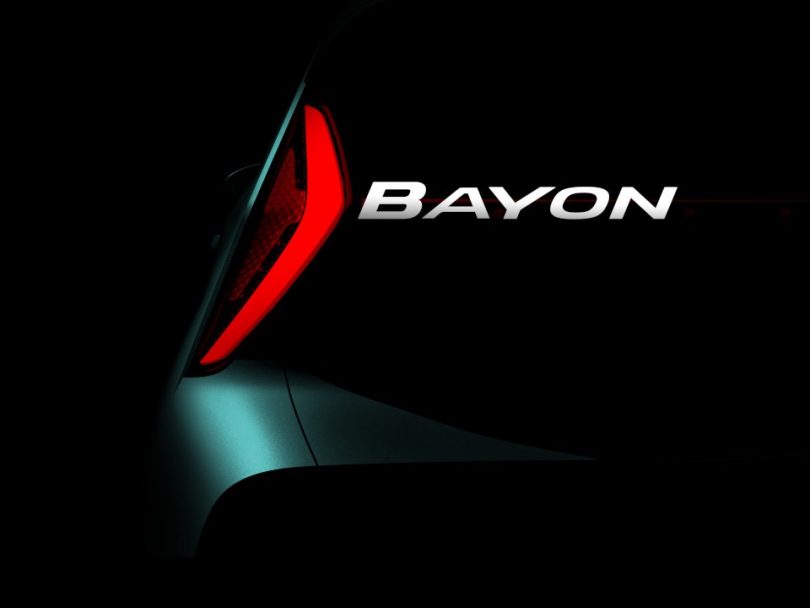 Hyundai has released a teaser for its upcoming B-segment SUV for the European market. It will slot below the Hyundai Kona which has been updated and redesigned for next year. Bayon will have a smaller footprint than Kona which has a length of 4205 mm (165.6 inches). Having a smaller size, all the mechanical elements could be sourced from the existing models of the Hyundai-Kia group.

The Bayon’s lineup will have a front-wheel-drive petrol engine which includes 1.2-litre four-cylinder naturally-aspirated motor making 84 bhp of power, a mild hybrid 99 bhp power 1.0-litre turbo engine and a 118 bhp version of the same engine. The gearbox which could be offered is a six-speed manual and a seven-speed DCT (Dual Clutch Transmission).

The Bayon will join Hyundai’s SUV squad with the likes of Tucson, Kona, Santa Fe and NEXO in the European market. There has been no official reveal of the styling of Bayon but the taillights are teased so far. The taillight of the Bayon is shaped like a boomerang with a LED setup.

Hyundai is known to derive names for their cars from different locations in the world. For example, Tucson and Sante Fe were named after cities in the states of New Mexico and Arizona respectively. In fact, Kona name was also inspired by the Hawaiian district Kona. The fuel-cell electric vehicle Nexo has its connections from Nexo, one of the largest towns in the Bornholm, a Danish island. Similarly the name Bayon is based on the French city Bayonne, a major hub for outdoor sports and activities.

Hyundai confirmed through its official website that Bayon, the entry-level SUV for the European market will be launched in the first half of 2021. More details will be out from Hyundai in the coming weeks. The Bayon is unlikely to reach Indian showrooms in the near future. Meanwhile, in our market, we have just received the all-new Hyundai i20 in its 3rd generation avatar which gaining popularity very quickly.