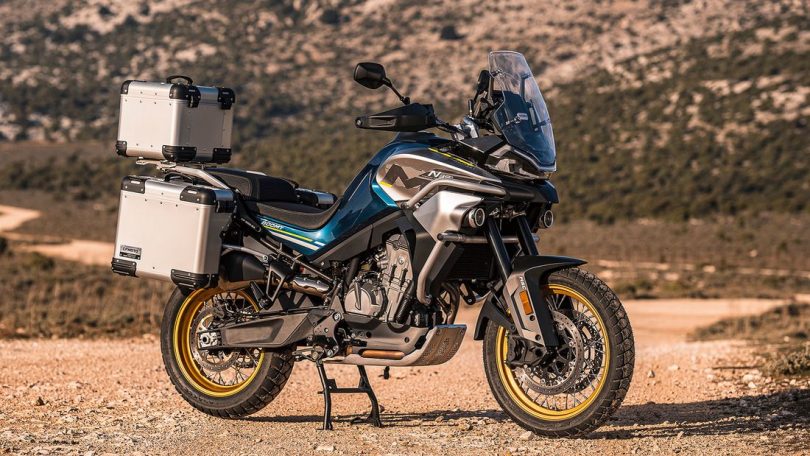 Following the spy shots of the MT 800 CF Moto has finally pulled the wraps off the brand’s latest Adventure Class motorcycle. The CF Moto MT 800 was spotted testing last year and by the end, a not so clear picture of the production-ready motorcycle had appeared on the internet. But the brand has revealed the product, which is based on the KTM 790 Adventure.

A few years ago CF Moto partnered with KTM and already manufactures the Austrian bike-makers machines at their production facility in China. The move has also led to the development of products such as the MT 800 which is expected to go on sale in the Chinese market as well as the international market.

It is also revealed that the Adventure Tourer will come in two variants a road-oriented version with alloy wheels and road-biased tyres and the off-road armour subtracted from it, but luggage mounting points are expected to remain. The Off-Road focussed version will come with 19-inch front and 17-inch rear spoke wire rims with dual-sport tyres, knuckle guards, sump protector, auxiliary lights, hard-case luggage panniers and a comprehensive crash protection system.

The CF Moto MT 800 is styled like a thorough adventure motorcycle with an upright fascia, a small beak, wide LED headlamps, tall windscreen, wide handlebars, upswept exhaust, mid-set footpegs, scooped seat, a tail rack, etc. The motorcycle comes with upside-down front suspension with long travel, a monoshock on the rear, a chunky swingarm, twin disc brakes on the front and single-disc on the rear equipped with ABS.

The engine is expected to be borrowed from KTM, and the MT 800 will use the LC8 799cc liquid-cooled parallel-twin cylinder 8-valve DOHC motor that churns out 95 Hp of power and 88 Nm of torque matched to a 6-speed transmission with a mechanically operated slipper clutch that does its duty on the KTM 790 Adventure.