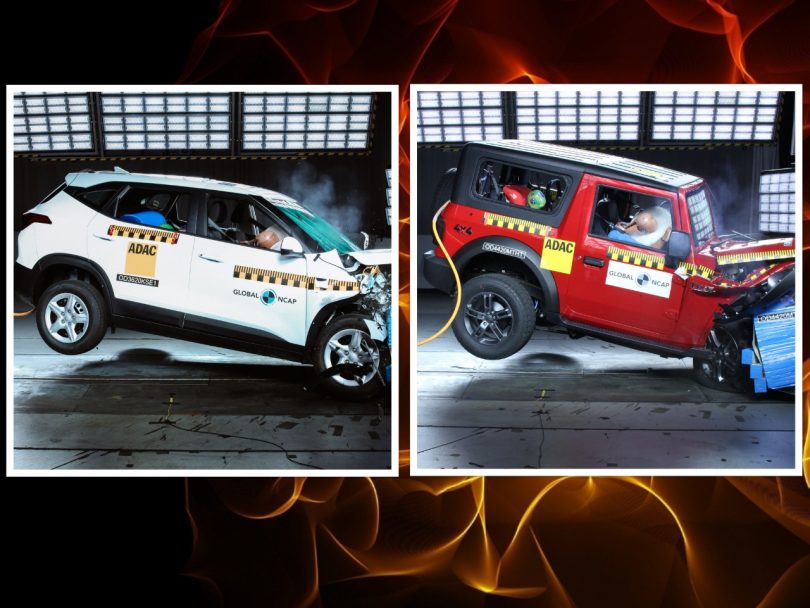 The Global NCAP (New Car Assessment Programme) crash test and reports vehicles for emerging markets such as ours under the SaferCarsForIndia initiative. Recently the international charity organisation published its reports on the all-new Mahindra Thar as well as the Kia Seltos sold in the Indian market. In this report, we compare the crash safety test report published by the Global NCAP.

The all-new Mahindra Thar has been introduced in the Indian market a couple of months ago and the lifestyle SUV has gained quite a bit of traction in the Indian market. So much so that the Thar has been sold out until May 2021 by receiving more than 20,000 bookings in very little time. On the other hand, the Kia Seltos was also an instant hit when the SUV was launched in the Indian market and in just 3 weeks since the brand opened pre-bookings on the vehicle Kia announced that 23,311 Seltos were already booked. Later on, the SUV also went on to top the sales charts even surpassing the Hyundai Creta.

The 2020 Mahindra Thar is offered with safety equipment such as dual airbags, Antilock Brakes with Electronic Brake-force Distribution, Electronic Stability Program, rear parking sensors and a roll cage. The Kia Seltos is equipped with Driver and Passenger Airbags & ABS Rear parking sensors. The Mahindra Thar is the only vehicle offered with a roll cage fitted from the factory in the Indian market. The Mahindra That at the GNCAP test was equipped with driver and passenger frontal airbags, ISOFIX child seat anchorage system, seat belt reminders, front seatbelt pretensioners and ABS. The Kia Seltos was equipped with seatbelt reminder, front seatbelt pretensioners, driver and front passenger frontal airbags and ABS.

The all-new Mahindra Thar scored 41.11 points out of 49 points in the child safety department and comes equipped with ISOFIX child seat anchorage system and the GNCAP’s 18-month old child dummy was seated in a BRITAX BABY-SAFE child restraint system fixed in the rearward facing (RWF) position using the vehicles ISOFIX anchorage points and a support leg. The 3-year old child dummy was seated in a BRITAX DUO PLUS child restraint system installed using the vehicles ISOFIX anchorage point and top tether. In both cases, the Child Restraint System showed compatibility and was able to prevent excessive forward movement of the head during the crash. Moreover, the 18-month old child in RWF seat was offered full protection.

The Kia Seltos scored 15 points out of 49 points for child safety and the 18-month old test child dummy was seated in a CHICCO KEY FIT rearward-facing child seat and the 3-year old test car dummy child equipped with CHICCO COSMOS child restraint system was installed using the adult seat belt in the forward-facing position as not able to prevent excessive movement during the crash, while the RWF seat showed good protection on the head and chest for the 18-month old. Both child restraints seats also did not show compatibility.

*It is also important to note that the Kia Seltos tested for the Australian and New Zealand markets, scored a top 5-star rating in the ANCAP (Australasian New Car Assessment Program) crash tests. The Kia Seltos for the Australian and New Zealand markets is offered with more features as compared to the vehicle in the Indian market. To read the ANCAP report for the 5-star Kia Seltos, click here. 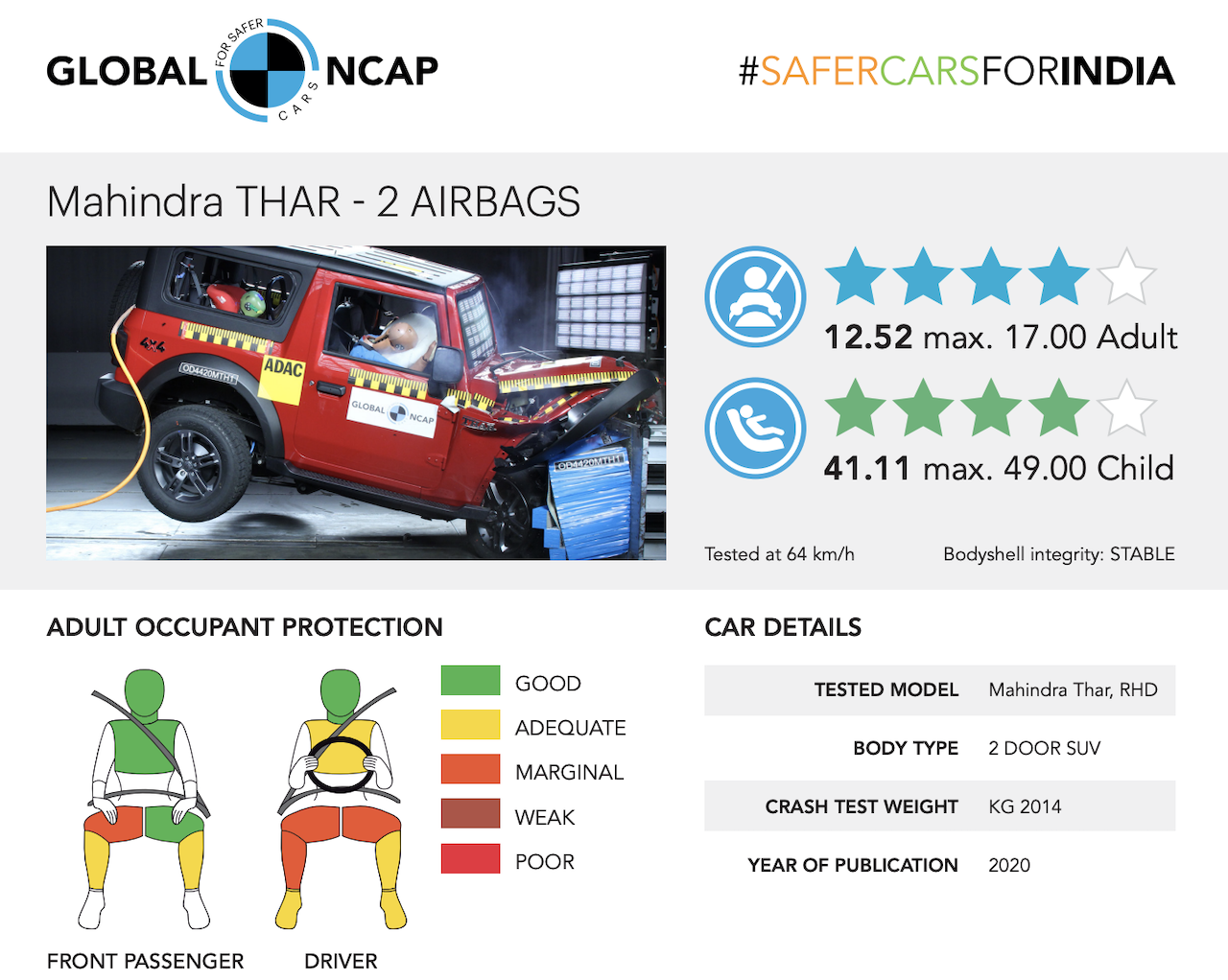 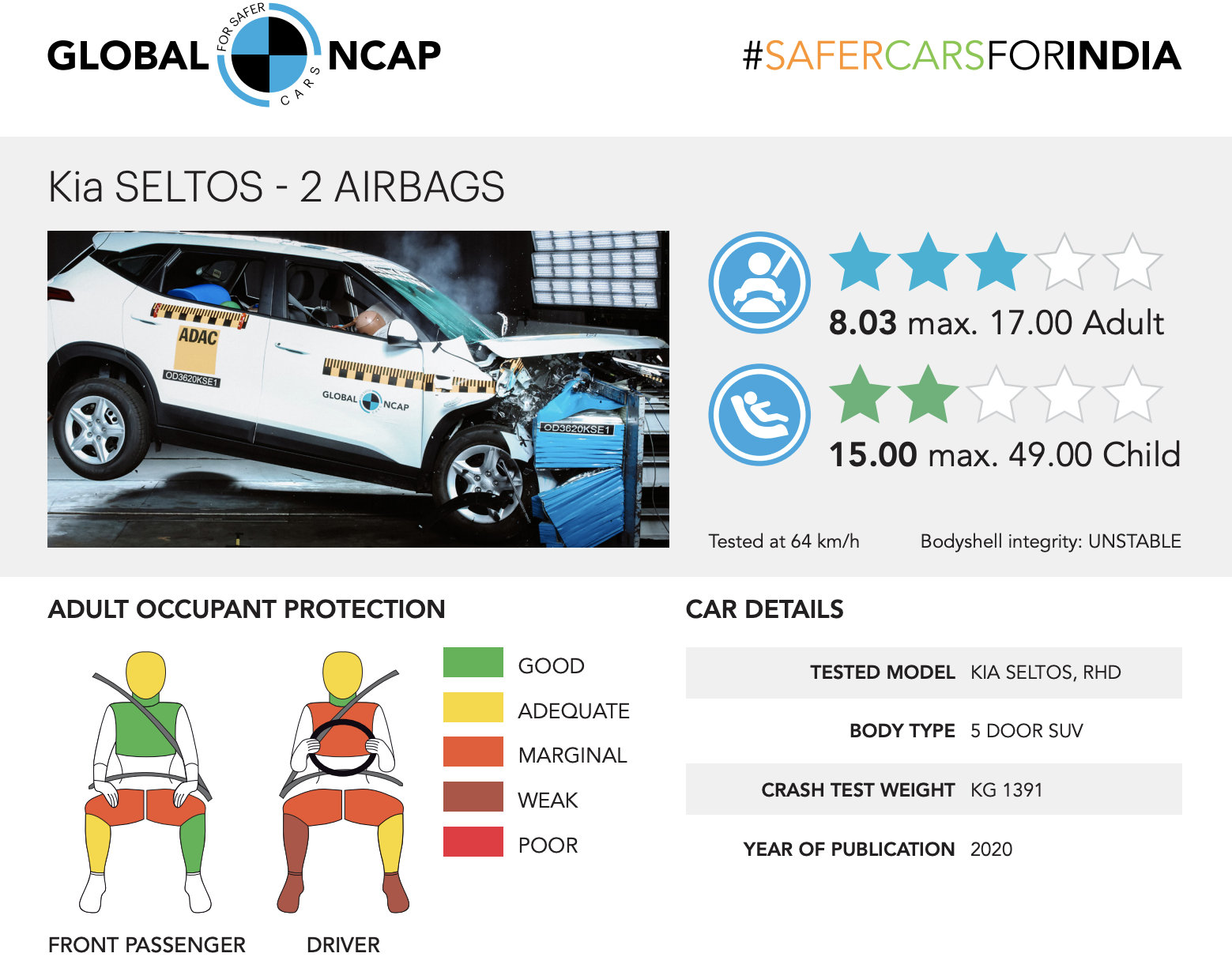