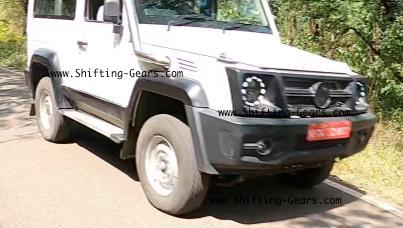 Force Motors is gearing up to launch the new 2020 facelift Gurkha SUV in the Indian market. The brand is speculated to be making final evaluations on the utilitarian off-roader and the SUV is likely to be introduced soon. The 2020 Force Gurkha has been spotted close to the ARAI (Automotive Research Association of India), an internationally recognised organisation that offers comprehensive certification and homologation of all the motor vehicles and components in India which leads us to believe that the Gurkha is in the final stages of validation and it will not be long before it is shipped to dealerships around the country.

The Force Gurkha was spotted sans camouflage in the three-door iteration which directly competes with the popular Mahindra Thar SUV. The Gurkha is also likely to come in a 5-door iteration that was available in the BS4 model. The spied test vehicle was painted in the shade of white and featured a chrome-plated snorkel that improves the vehicles water wading abilities and is expected to be offered as a standard kit.

The test mule was equipped with LED daytime running lights that are incorporated in the rounded headlamps and placed on the outer periphery. The headlamps are also likely to be LED units with projector beams. The front apron looks very offroad friendly and the test car was equipped with black bumpers and black finished grille. The production-spec model is speculated to come with a body-coloured grille with chrome-accented ‘Force’ badge and body-coloured headlight shrouds, the bumper is likely to be finished in black and is also likely to be equipped with projector fog lamps, depending on the variant.

The facelift model also comes with redesigned bumpers and headlamps. The side indicators that earlier flanked the headlamp units are now missing in action, but they could have been replaced with the one’s flanking the bonnet shutline. The side window for the second-row passengers also appears to be a single pane of glass fixed to the body unlike the slider type window from the predecessor. The third window has also been removed as the new window pane is longer than before. The new SUV is also likely to come with LED combination tail lamps that are mounted vertically on the body instead of the horizontal bumper-mounted units. The three-piece windshield on the rear has also been replaced with a single pane glass windscreen. It also leads us to believe that the rear entry will be larger than before.

The pictures of the interiors are not available at the moment but the brand is expected to have made changes to the ergonomics and quality of the material as well as the comfort and convenience equipment of the Gurkha to enable the lifestyle utilitarian lock horns with the Mahindra Thar.

In the engine department, the Force Gurkha is expected to be powered by a BS6 emission compliant 2.6-litre diesel engine that churns out close to 85 hp of power and 230 Nm of torque. The Gurkha is also likely to come with a more powerful 2.2-litre diesel engine that makes 140 Hp of power and 321 Nm of torque. Both engines are expected to come with a mated to a 5-speed manual gearbox along with a single lever selective 4×4 high and low ratio transfer case with live front and rear axles and differential lock on both the front and rear.

The brand is also expected to have made thorough changes to the body and chassis to make it compliant with the new crash safety norms and to make the SUV pedestrian safety compliant. The Gurkha is also expected to feature dual front airbags, ABS, reverse parking sensors, over-speed alert and seatbelt reminder as standard part of the pack. 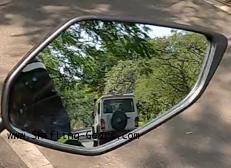