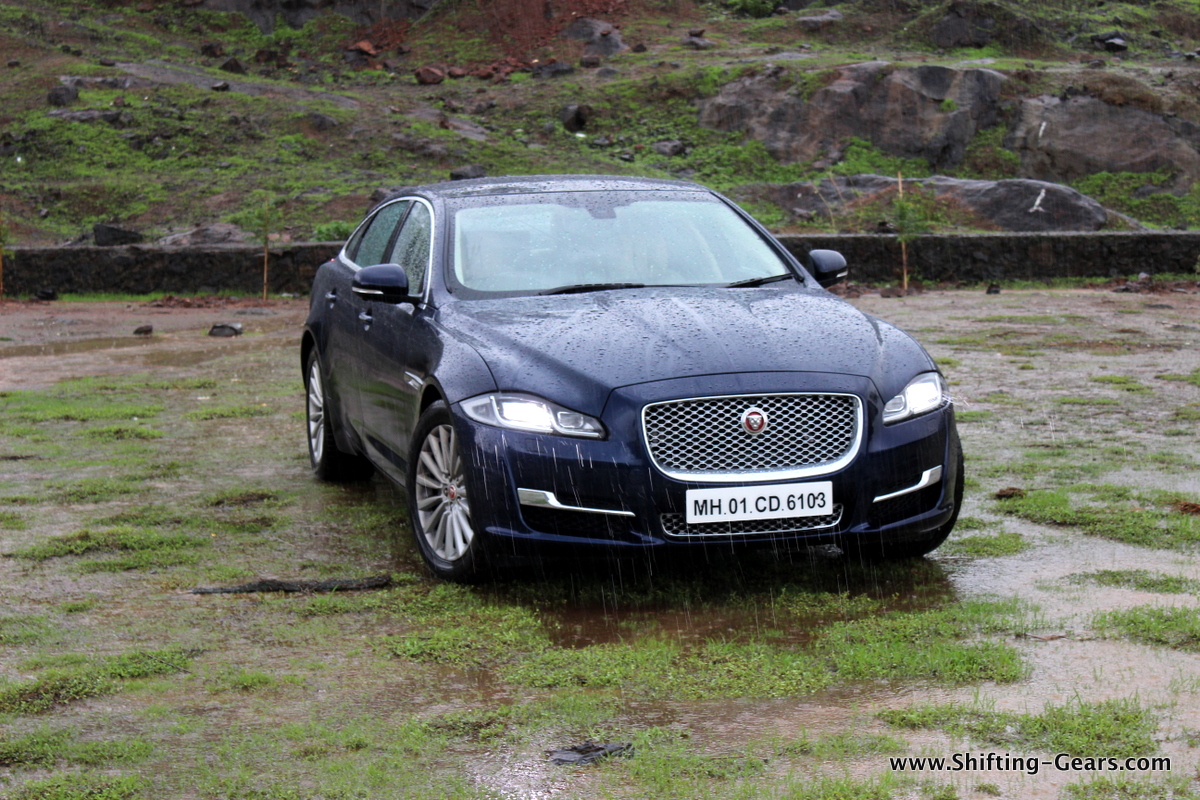 It totally lives up to its name. A ‘Jaguar’. It’s strikingly long, very bold and has the right amount of grace and elegance in its stance. It factually goes to resemble the logo and the animal which this company is inspired from. Subtle and Aggressive. She has been here since 4 years and she still looks as magnificent as ever. Yes, this is the new Jaguar XJ Portfolio and we were invited to try out this British beauty this monsoon in Bombay. 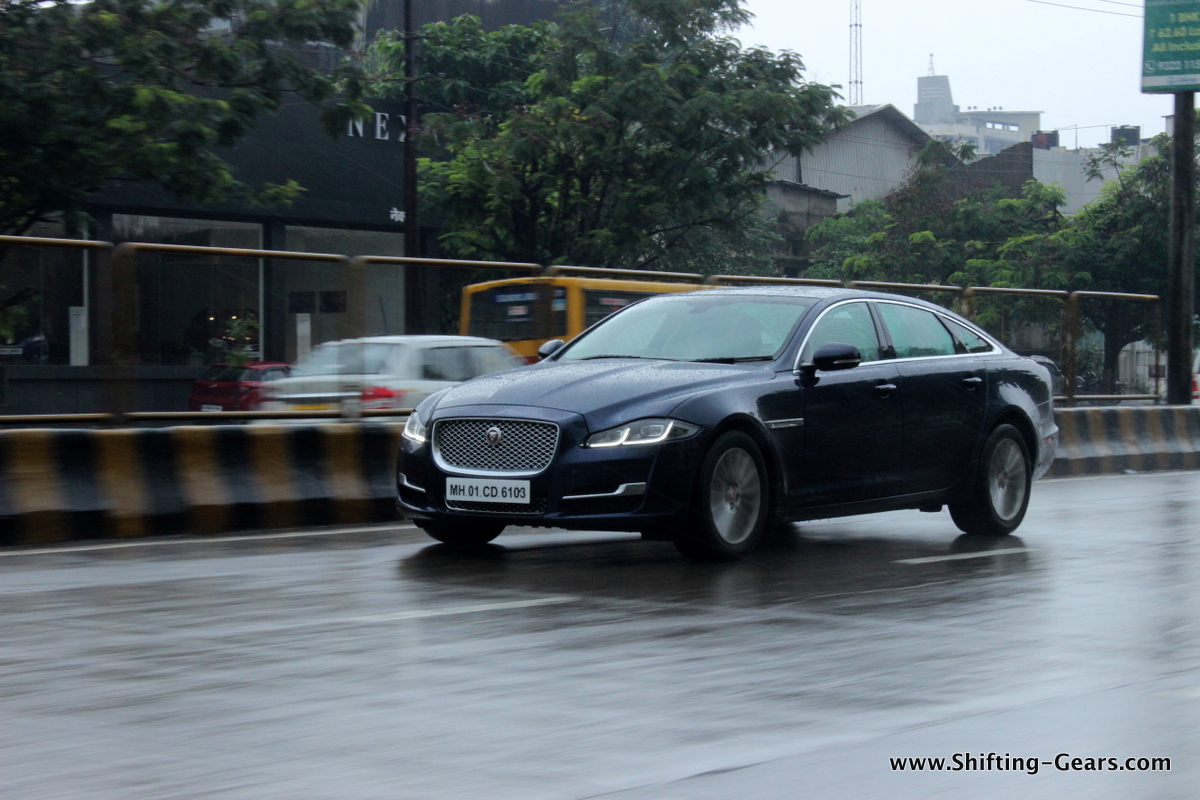 The XJ has always tried to keep itself more to the super luxury car owner who prefers to be behind the wheel rather than using the services of a driver. Its main rivals being Mercedes, Audi and BMW, the Jaguar has the sportier driving style and feel to it rather than anything compared to its class.
Jaguar have definitely triumphed over the design and performance with this new face lifted model of theirs.

Exterior:
Jaguar used the slogan “Grace, Space & Pace” in their advertisements once upon a time. I believe those words hold it absolutely true for this new modern day XJ. This car is designed with multiple elements kept in mind. It’s neither too strict like the Germans nor as flashy as the Italians. This car is pure British tradition. It’s a conformist in today’s market of luxury cars. It may not have the sporty intentions of its mainstream rivals but it has some pretty straight-line power performance all due to its new series of V6 and V8 engines which are supercharged and rear wheel driven. It’s the kind of car which would make you feel relaxed while accelerating your pulse. 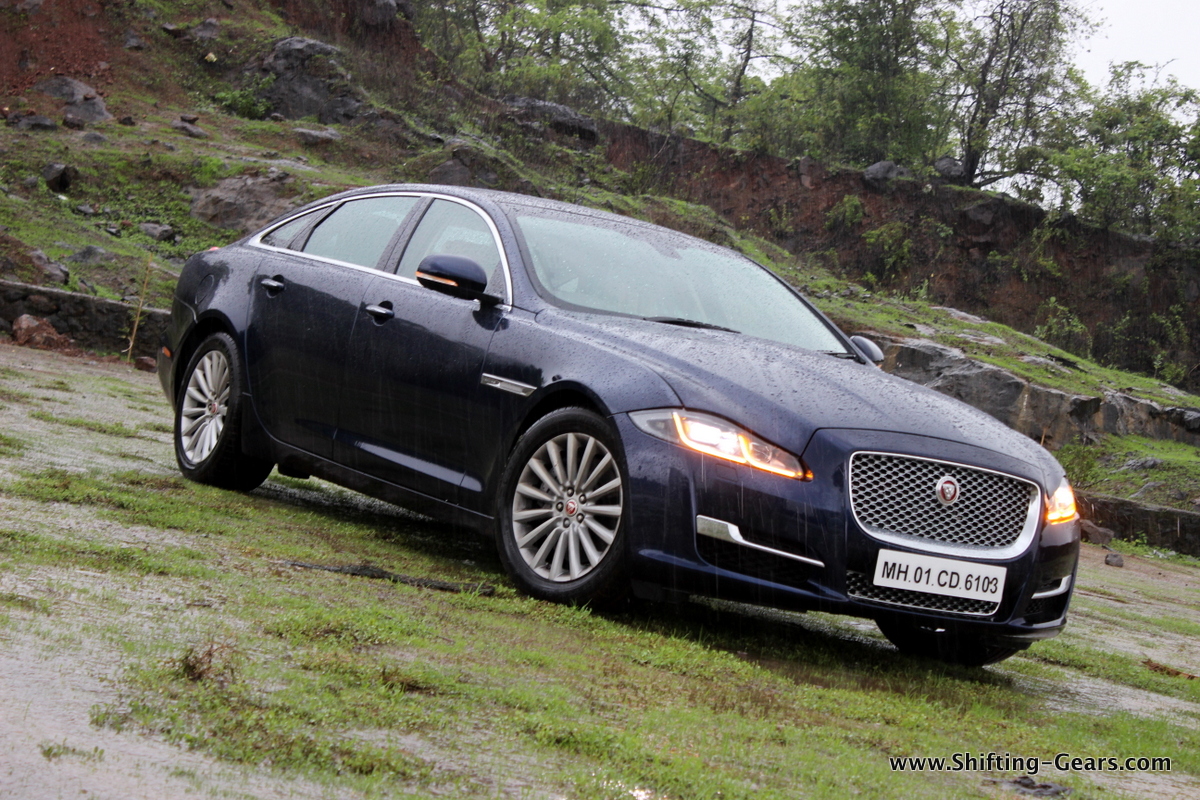 The one thing which you could be sure about this car is that it wouldn’t go un-noticed. You would definitely recognize it to be a Jaguar XJ thanks to its new chic design.

The XJ comes in a short as well as a long wheel based models. The long wheel base models have massaged seats with a heating and cooling feature with a reclining option. There are folded trays on the seat as well. It lacks some of the modern hi fi driving aids when compared to its rivals but it blends in sport and luxury specifically with unique features such as a self-leveling suspension and a double paneled glass on all their models. 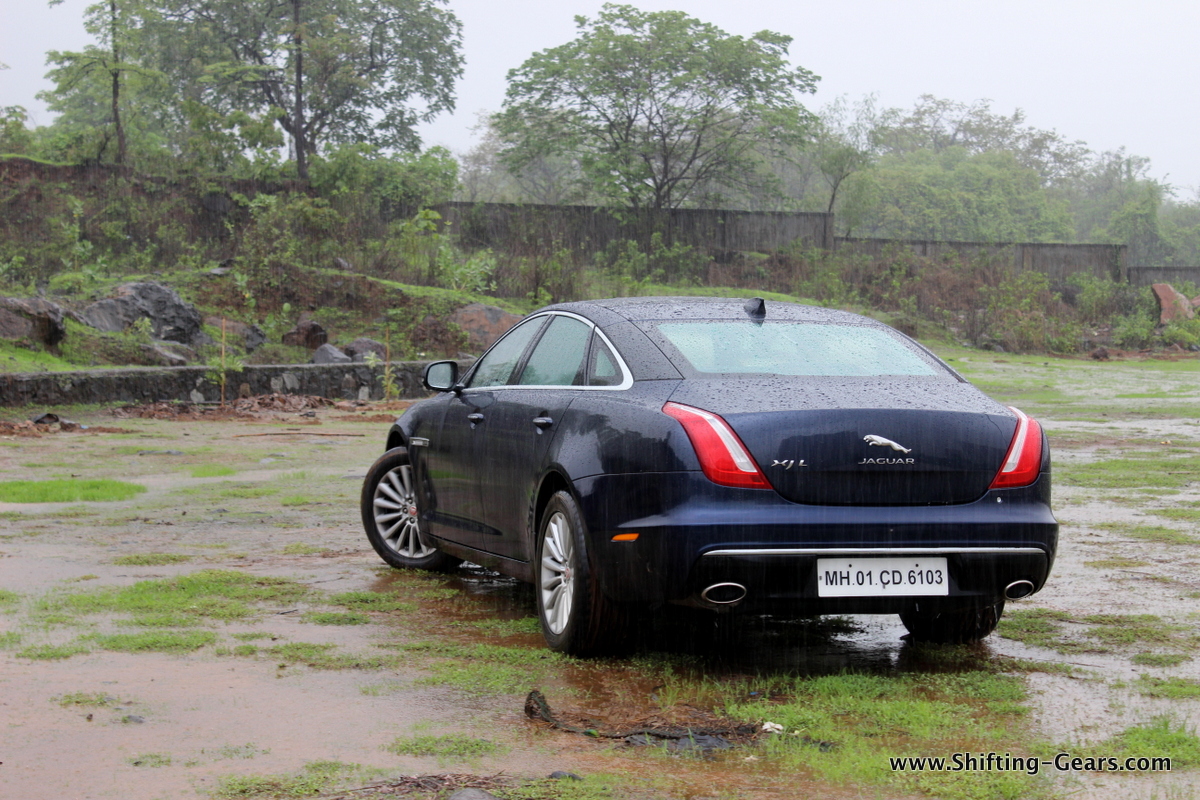 The headlights and taillights are new and the grill has been completely redesigned as a part of the new facelift. The InControl app suite in the car provides blind spot monitoring as a standard along with heated and cool seats. The XJ Supercharged and Portfolio models have a quilted seat trim. There is an option for a self-parking system in the car and the power delivered to rear wheel is assisted with an electronic power steering. Most of the other exterior design elements in this model remain the same.

Interiors:
Jaguar has worked the interiors of this car keeping a traditional approach in mind. Its rivals being focused more on ultra-high-tech, the first thing you would notice when you get into this car is the low base driving posture. The air vents are round and sporty and go synonymously with the design of the steering wheel and the logo of the jaguar positioned right in the middle of it. The dash board is loaded with high quality wood veneer and rich textured leather. I kind of believe that this appeals and looks much more genuine to the type of design this car has when you look at this with context to the other rivals. They have a cool blue ambient lighting feature and most of the buttons on the console have a metal finish to it. A beautiful blend of modern and sporty. 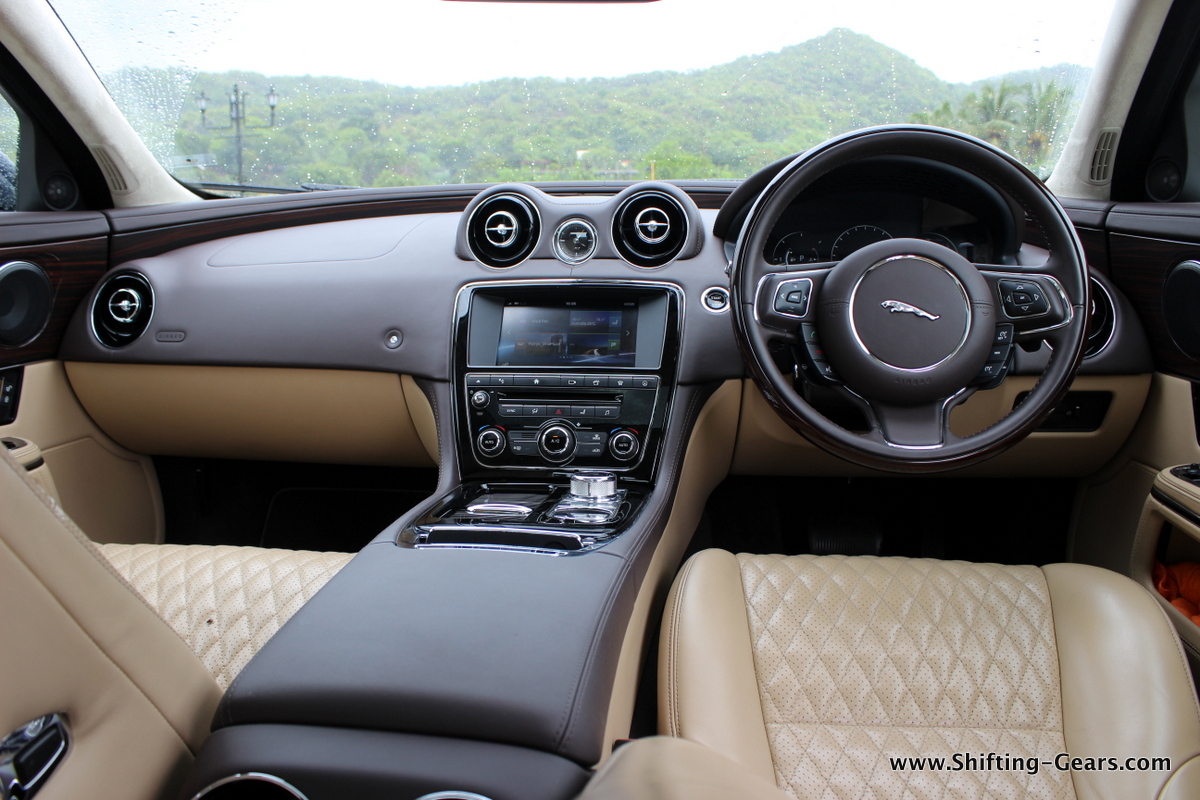 The infotainment system contains an eight-inch that has a gesture recognition feature which is very good and functional when you compare it to today’s smartphones. The dashboard has a 12.3-inch display system which converts into a sat-nav screen at the push of a button. I wouldn’t say the Jaguar could match up to the luxurious feel in terms of fitting like Mercedes Benz, but then its satisfactory to the kind of design philosophy emphasized in this car.

The steering wheel is electronically adjusted and this car can definitely accommodate a person of any size. This car is huge and believe me when I say that. It’s humungous. Hence the front, rear and side sensors come in very handy and you always have the option of a 360 camera and then, spoil yourself features like the auto park although I am not really a fan of that.

Jaguar always had an issue of their rear seats being rather claustrophobic owing to the low slung roofline of the car. In this new facelifted model with the long wheelbase its much better. It may be tighter than its rivals but it sure has that cocooning feel to it. 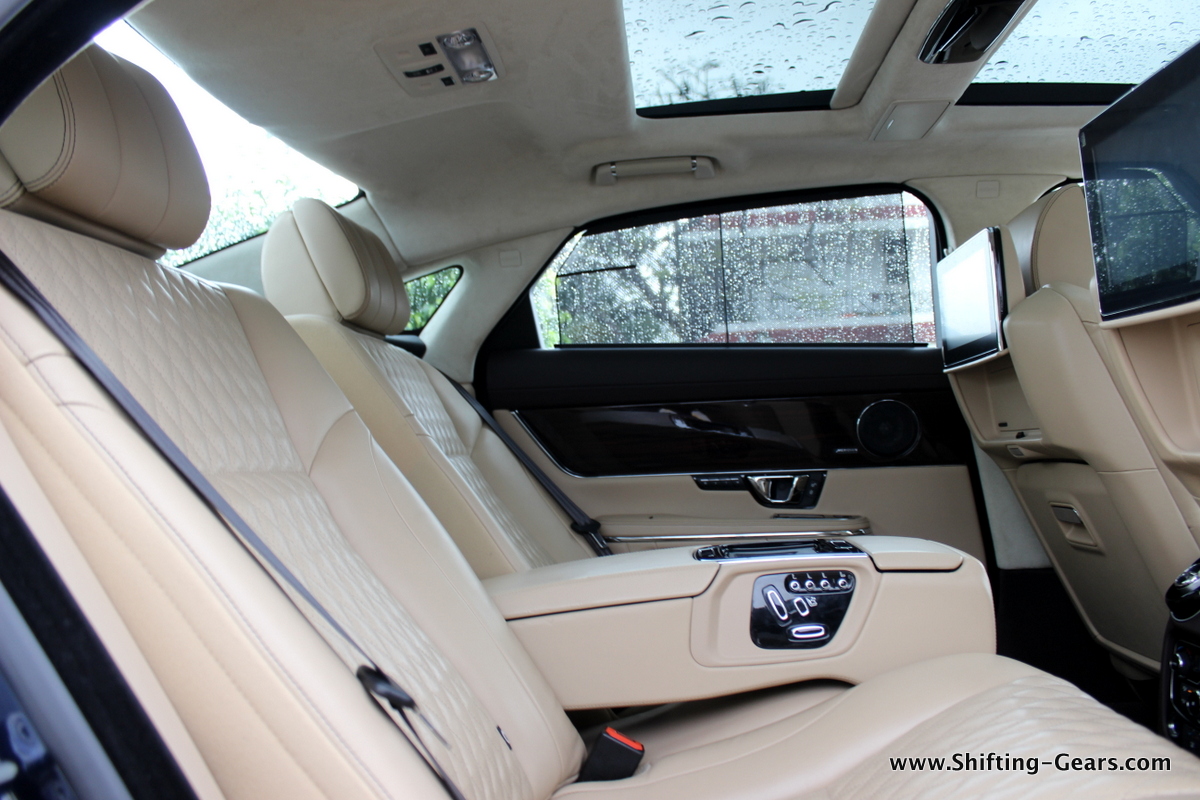 The rear seats have an entire host of features to play around with. There are electronically adjustable massage seats which have separate ventilation climate control. You could also choose the color of the screen perched on the front seat headrest.

The boot size is smaller as compared to its rivals and it would be tricky to fit in certain items into it. This is again attributed to the low base design flow of the car. 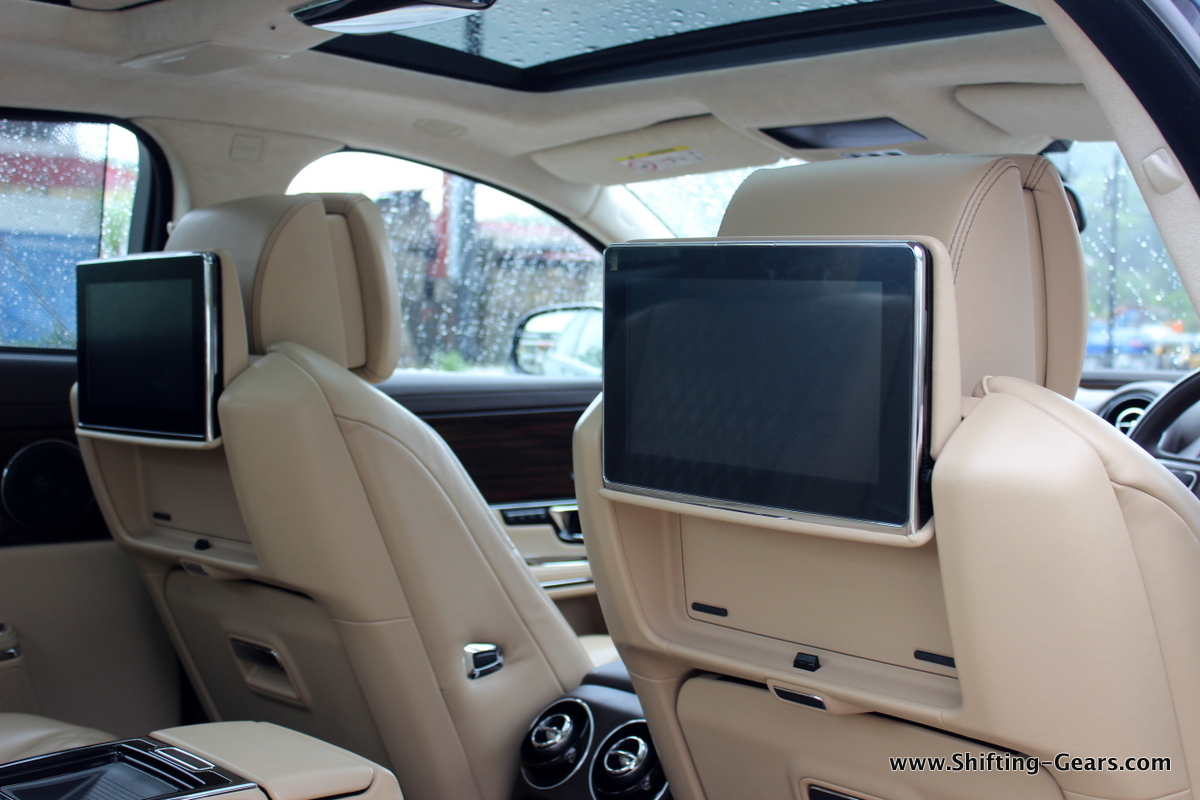 To sum it up, Jaguar has blended a great harmony of luxury and active sportiness while designing the interiors of the car. It has a really inviting feel to it.

Engine, performance & handling:
Under the hood, the most preferred option is the Turbocharged 3.0-litre diesel V6, as it provides the best balance between performance and efficiency. It produces 296bhp, which is usefully spread right across the rev range. This is the one we tested and I particularly say that this is totally apt for our Indian roads. 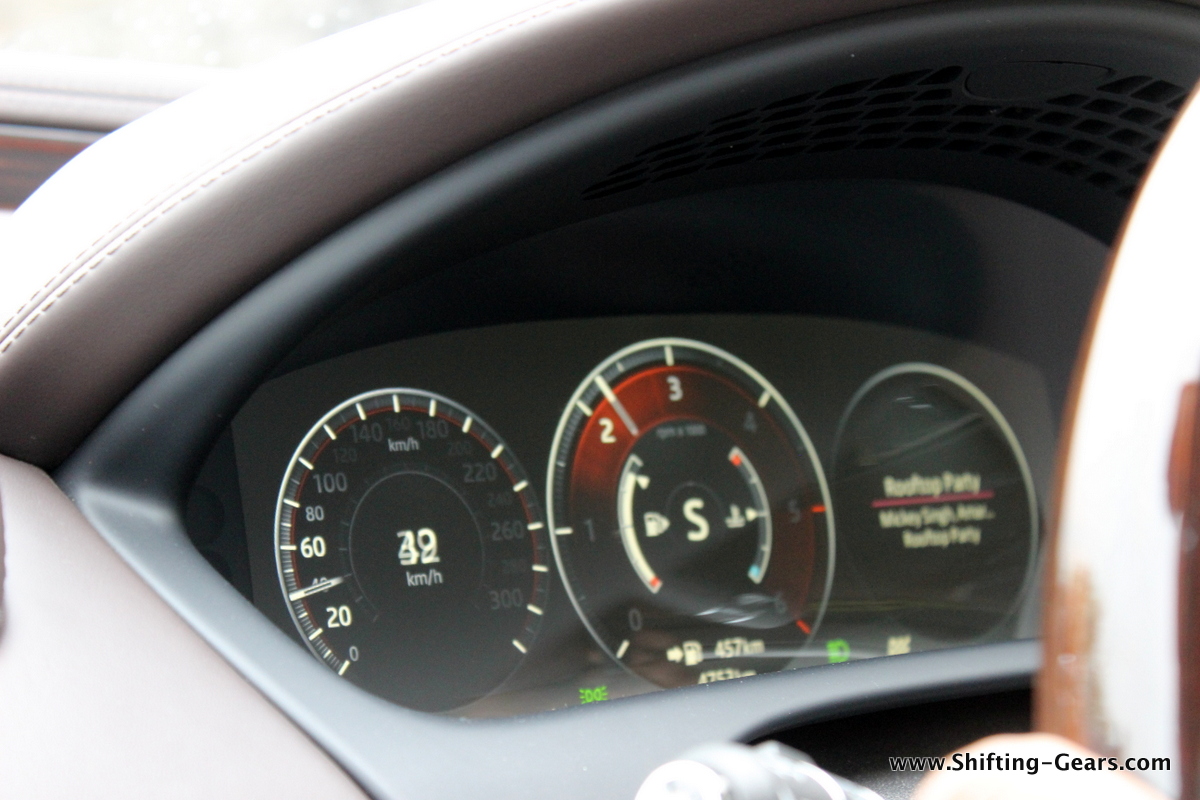 The petrol engine is a Turbocharged 2.0-litre inline 4 producing 227bhp. The engine gives the feeling of a pure 6 cylinder by having a broad power band and on demand power from lower rpms.

Diesel versions of the BMW 7 Series and Mercedes S-Class are cleaner and more efficient, however, and will therefore be more appealing to driver businesses. The lack of a hybrid option for the XJ also marks it out compared to its more modern rivals in this recent rush for greener car.

Our choice would be the 3.0-litre diesel in Portfolio spec. The equipment list is plenty to spoil yourself and the diesel engine provides the best power and economy in the range, with solid performance to extract. 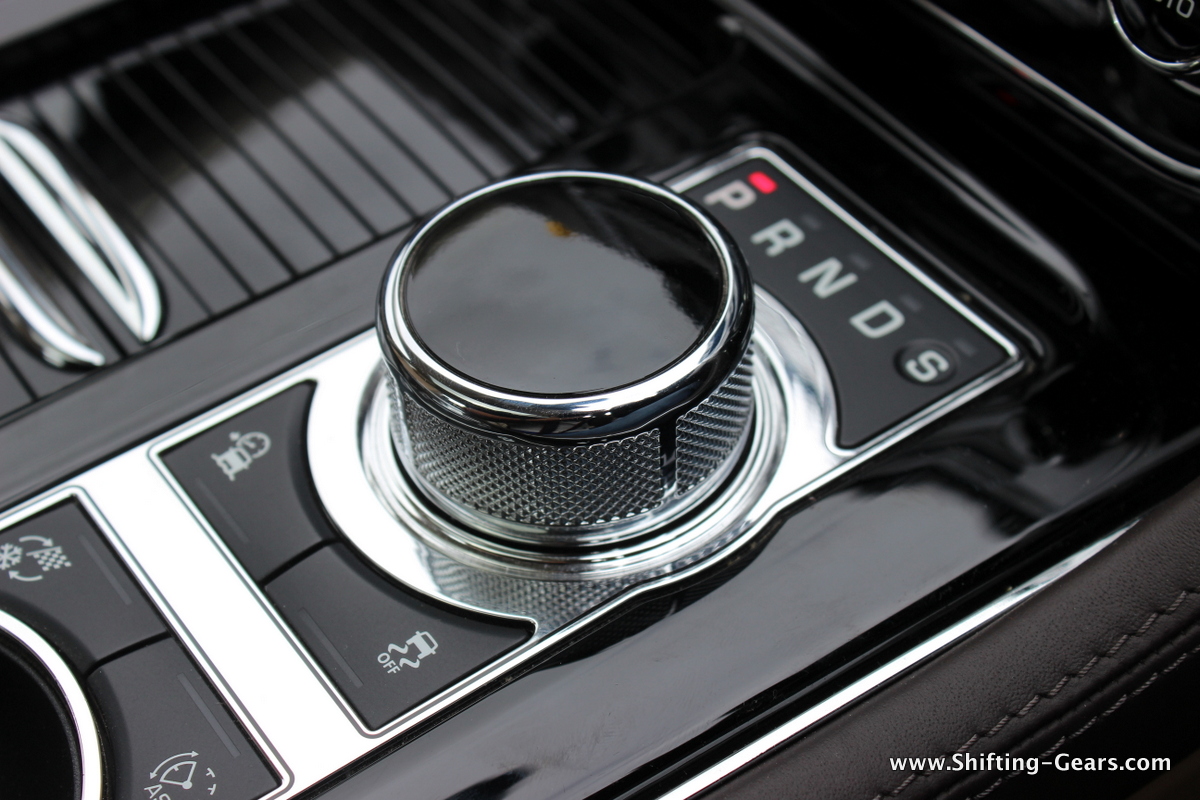 Driving the Jaguar XJ and the whole feel of the car is when this British beauty leaves its rivals far behind. It’s extremely agile and fun to drive especially when the roads get meandering and bendy. The car seems to lower and shrink down in size for you and become more and more maneuverable as you keep pushing it hard.

This driving experience is attributed to the electronic assisted new steering wheel which makes it really precise and accurate. The feedback is so good that you could judge the cars limits and weightlessness especially when experimenting and pushing her real hard on the dynamic mode. Along with this, they have decent and powerful setup of brakes which makes the drive reassuringly safe.

Testing this diesel beast on the NH3 was a breathtaking experience. The car accelerates with an agile yet heavy resonating rumble of a pure muscle car. The dynamic mode is highly responsive and keeps the car within the constant 2000rpm range enabling it to deliver the maximum usable torque. 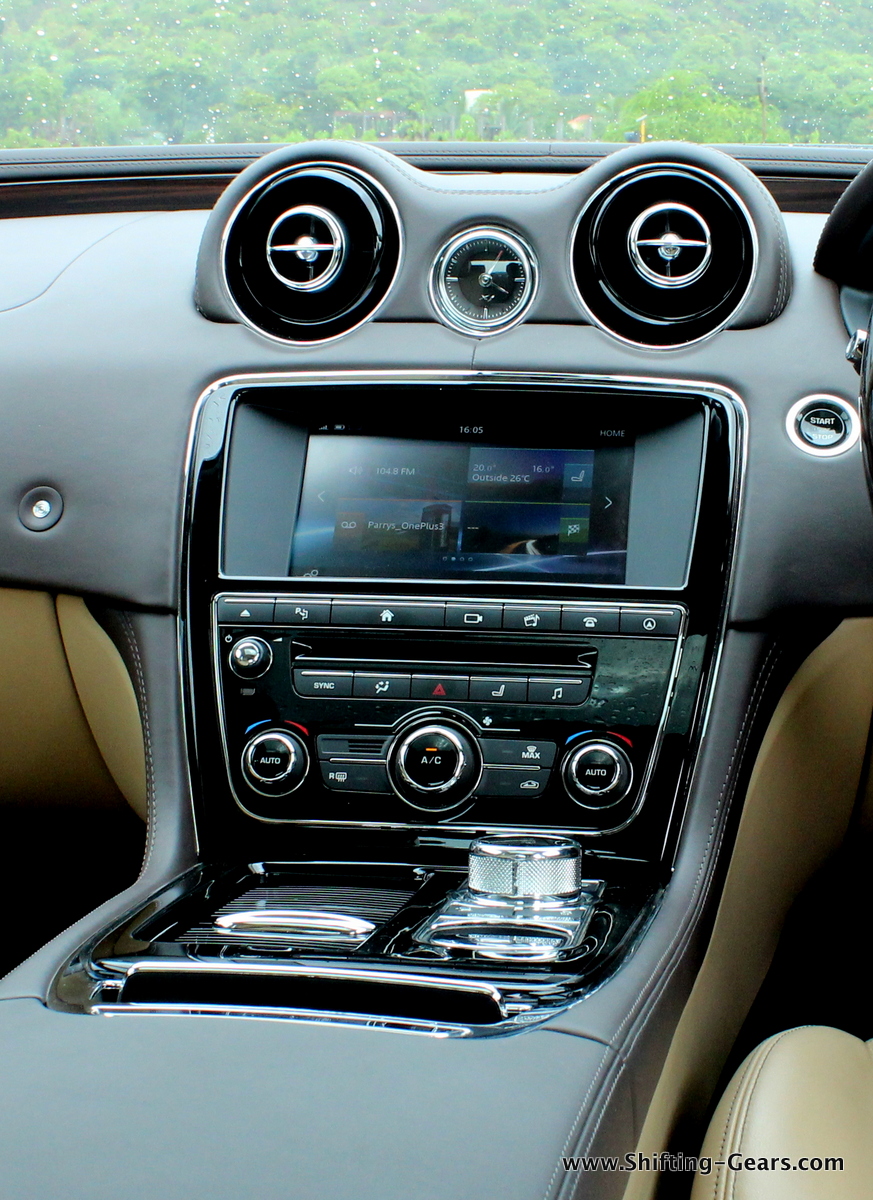 For a passenger perspective, Mercedes and BMW would take the crown owing to their features of pre road suspension setups by automated scanning. The XJ is more basic when you put these features to play as there are preset modes. But the force feedback from the 20inch alloys is pretty harsh and minute ripples and bumps on the road could slightly be felt when and as compared to its rivals. There is also a audible road roar at high speeds from those huge wide profiled tires.

The electric power assisted steering wheel on the new XJ enable a feature called Queue Assist. This steers the car in slow moving lines of traffic and while the automated parking feature is used. The 360 degree camera provides the driver with a complete bird’s eye view of the surrounding. There is an adaptive cruise control, auto-dipping headlights and fog-lights which work with bend illumination.

Most of the remaining safety features are standard as compared to the older model. 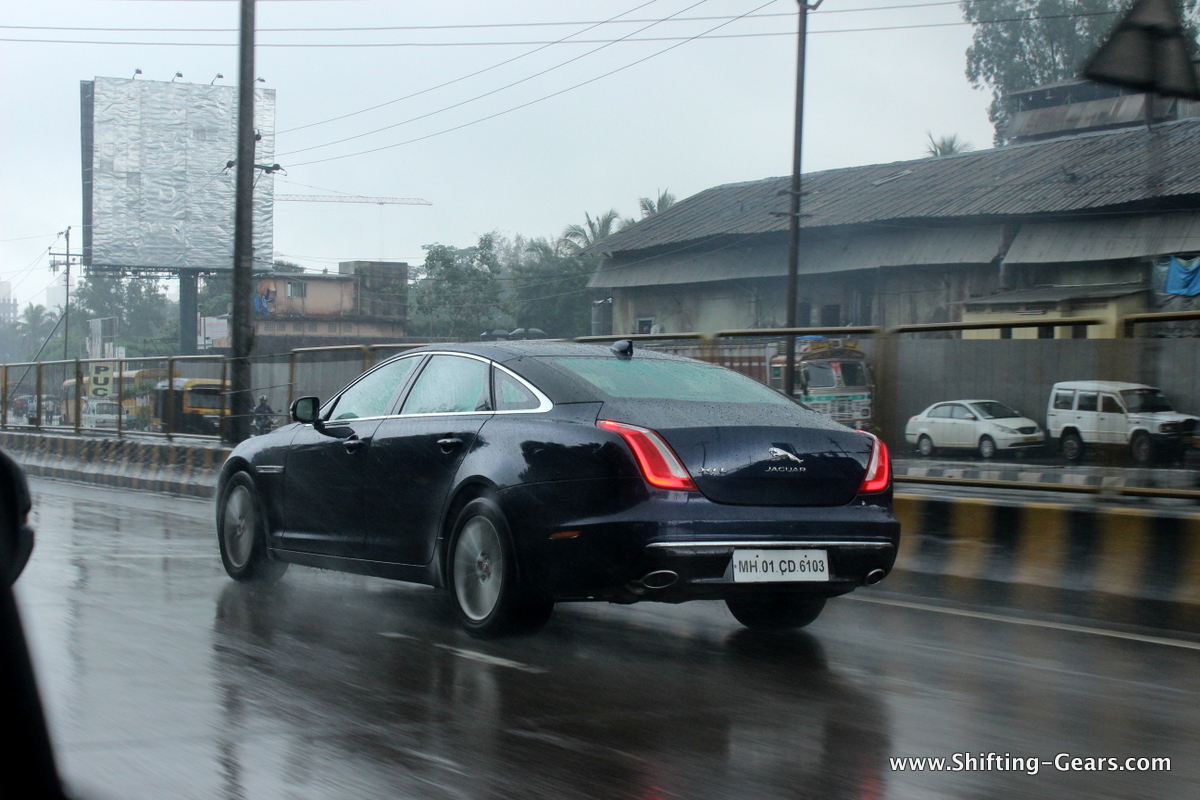 The wait for the Jaguar XJ facelift model has been totally worth it. There’s an excellent new diesel engine which provides on demand power with a very decent fuel economy and loads of high tech features to keep it in touch with the ever rising competition among its rivals. There was a little trouble in the damping out our harsh road impacts. The whole aluminum body makes this really nimble and the driver-selectable settings for the transmission and the engine give the driver smooth or hard responses on the driveline