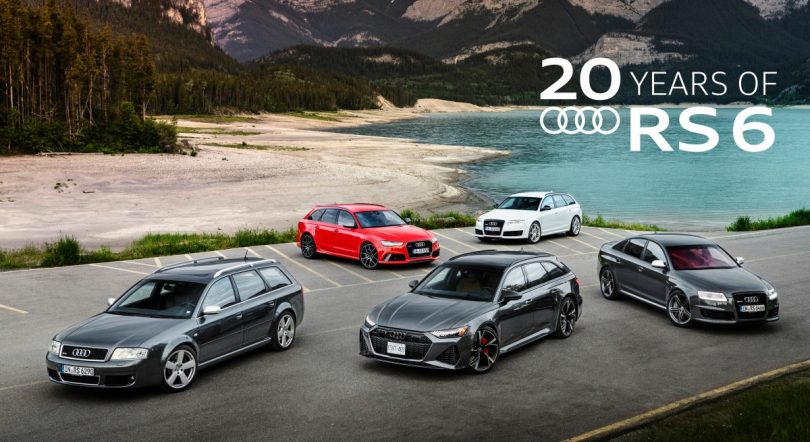 For 20 years, Audi RS 6 has inspired Audi Sport GmbH and a worldwide fan community. The RS 6 has set the tone for 20 years across four generations for high-performance station wagons with its performance and everyday usability. It owes its success to the underlying concept from 2002 for its double-charged engine and all-wheel-drive. With every generation of the Audi RS 6, the basic concept stayed the same. Every generation has set new standards in its competitive environment again and again. And it continues to do so. 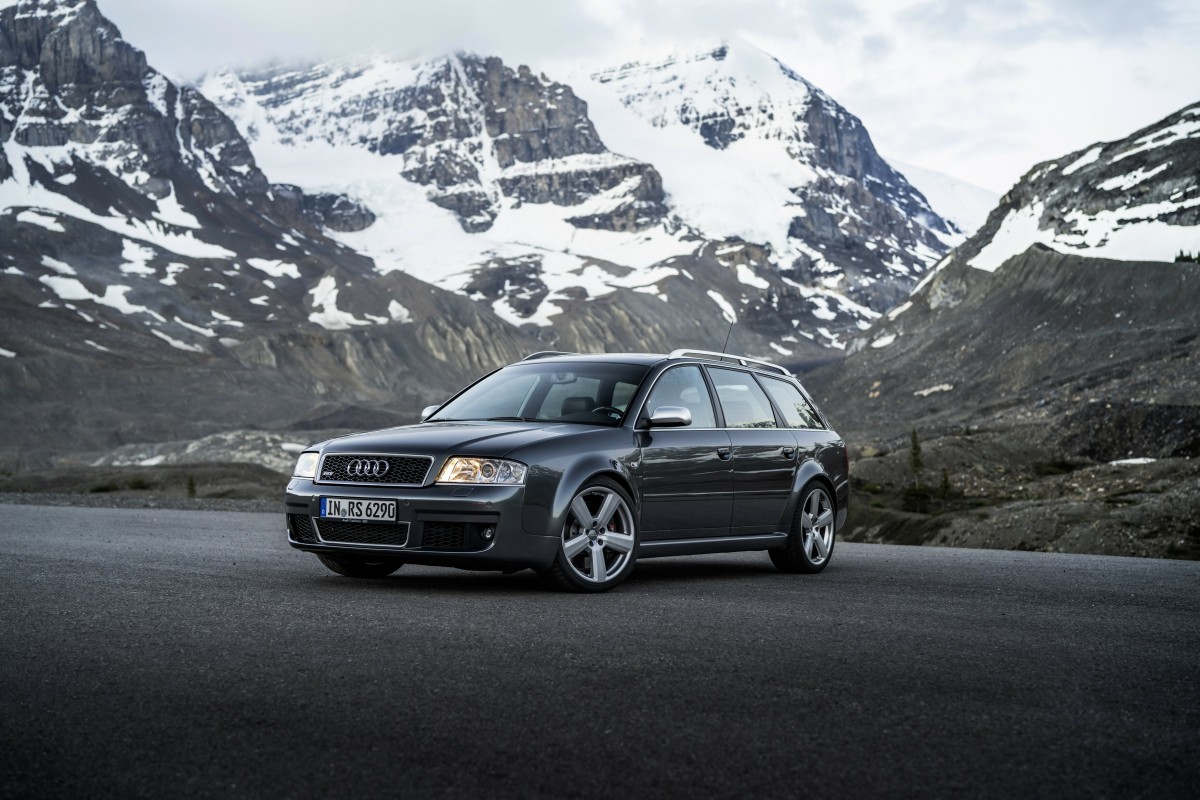 Shortly after the start of the 2000s, Quattro GmbH (now Audi Sport GmbH) was faced with the question as to which car it should give a sporty renovation after the RS 4. After the first generation of the A6 underwent a product enhancement in 2001, Audi also wanted to add more horsepower to the model. Audi engineers put in a lot of effort to make the A6 a sportscar. The brand didn’t stop at making changes to the engine, transmission and suspension. Audi increased its length and width by 40mm and added new skirts, wider sills and a spoiler for the Avant version. Furthermore, it also got larger 18-inch or 19-inch wheels and two oval exhaust tips to emphasise its sporty character.

For the C5 RS 6, Audi took the 340 PS naturally aspirated V8 engine from the S6. It then added two turbochargers and increased the displacement to 4.2 litres. Audi had to extend the front of the A6 by 40mm to fit the engine. The engine was fine-tuned in England by Cosworth. The result was 450 PS and 560 Nm, which put it at the top of its segment. It also featured a torque-converter automatic for the first time on an RS model. The transmission reduced shifting times, which resulted in a 0 to 100 kmph time of 4.7 seconds. It also featured Audi’s Dynamic Ride Control to strike a balance between sporty handling and comfortable ride.

All the C5-generation RS 6 were built on the production line as well as by hand. Audi made the initial car at its plant in Neckarsulm. From there, they would take it to an adjacent hall. Over there, Quattro GmbH workers added the RS-specific components and individual interior decor.

To date, the C5-generation is the only RS 6 that is also a racing car from the beginning. Champion Racing used the RS 6 Competition, which won at the hands of Randy Pobst at the 2003 SPEED GT World Challenge. The RS 6 Competition’s bi-turbo V8 made 475 PS, was a manual and won in its first attempt.

At the end of the C5 generation, Quattro GmbH also added a “plus” variant. The power went up from 450 PS to 480 PS, torque remained the same at 560 Nm. Furthermore, the brand also increased the top speed from 250 kmph to 280 kmph. Equipment that was previously optional also became standard. 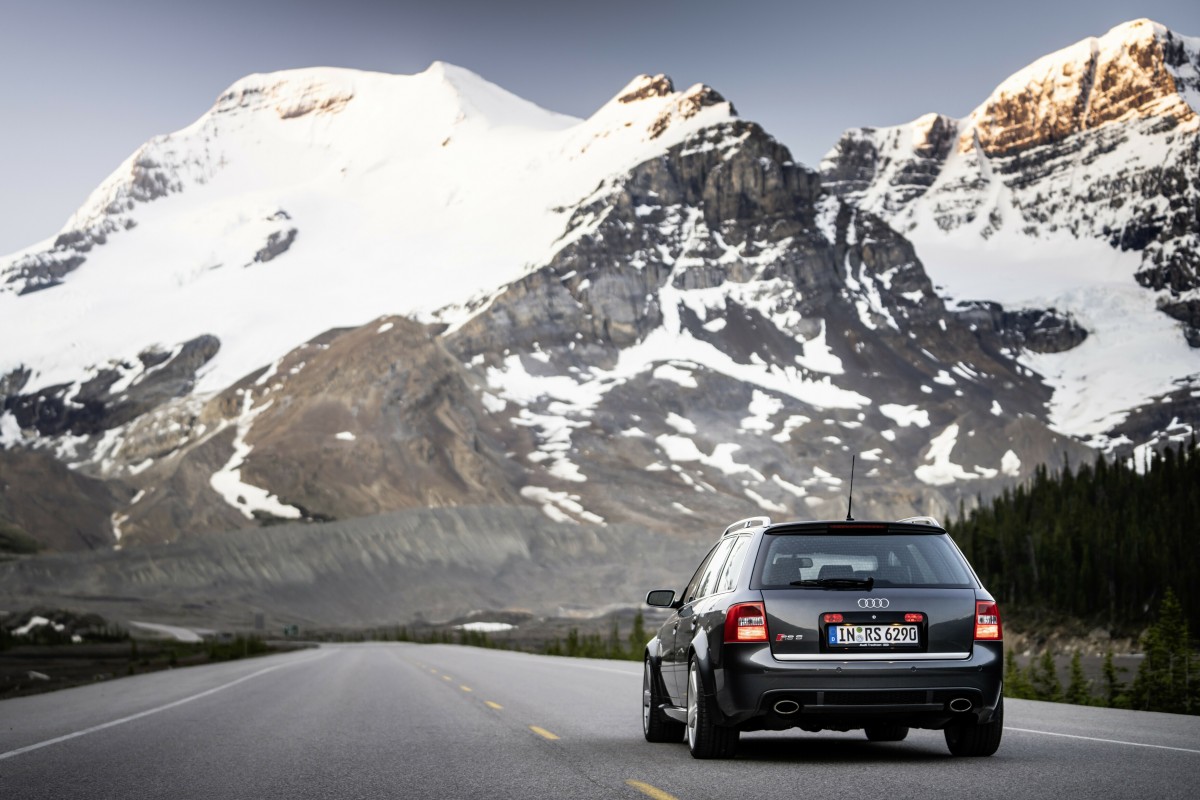 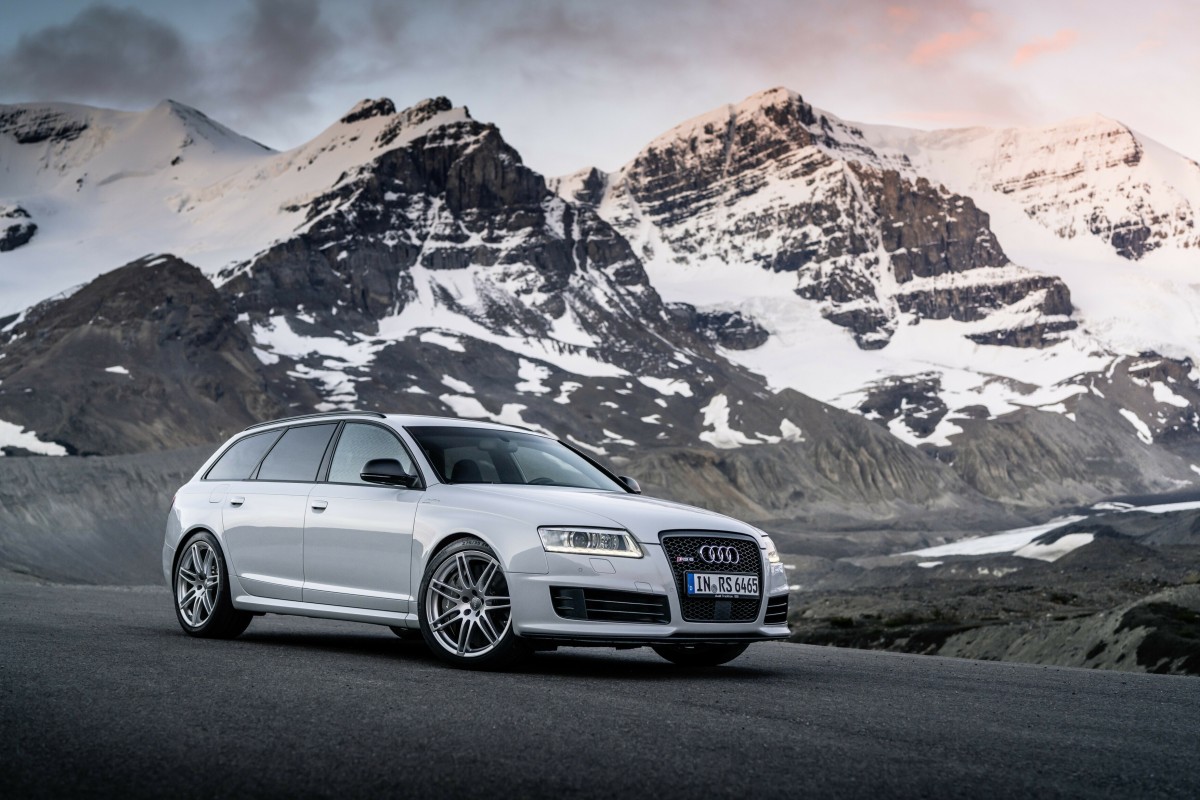 In 2008, six years after the C5 RS 6, the second generation C6 followed. In addition to power and displacement increases, Audi also added two extra cylinders. This took the total number of cylinders to ten. It continued to have two turbochargers, but the displacement was now five litres. All this resulted in a total output of 580 PS and 650 Nm of torque, which was available from as low as 1,500 rpm. Back then, these numbers even exceeded the Audi R8 GT’s 560 PS.

Audi produced the largest RS engine ever for three years. The engine weighed 278 kg, and Audi used motorsport-inspired dry sump lubrication. The latter ensured oil supply through curves at high speeds. This also allowed Audi to mount the V10 lower, which also gave it a low centre of gravity.

As with the C5, it needed a new transmission to handle all the power. Audi improved the six-speed automatic’s cooling, shifting speed and power distribution for this. With the new engine-transmission combo, the brand achieved a top speed of over 300 kmph for the first time with the RS 6 plus. The regular C6 RS 6’s top speed was 250 kmph, and 280 kmph was available as an option for an extra charge.

The Sedan took 4.5 seconds to go from 0 to 100 kmph, while the Avant took 4.6 seconds. The performance on offer also needed brakes to match. For the first time, the RS 6 came with optional ceramic brakes. The front discs measured 420mm while the rear discs were 356mm. This helped the RS 6 stop reliably from high speeds. Audi continued to use the DRC suspension, which was now standard on the Sedan and Avant.

Like before, Audi kept the design subdued. The brand added protruding fenders, which made it 35mm wider and large 19-inch wheels with 255/40-section tyres to set it apart from the regular A6. Additionally, Audi also offered 20-inch wheels and 275/35-section tyres as an option. Like the C5, the C6 also went from the production line directly to the Quattro GmbH hall for extensive refinement. Quattro GmbH workers finalised the car here as they did with the C5.

For the finale, C6 ended as an RS 6 Plus Sport or an RS 6 Plus Audi Exclusive. Audi limited its production to 500 units. All of them came with a numbered badge on the interior, special 5-spoke alloy wheels, leather instrument panel and RS 6 logos on the floor mats. 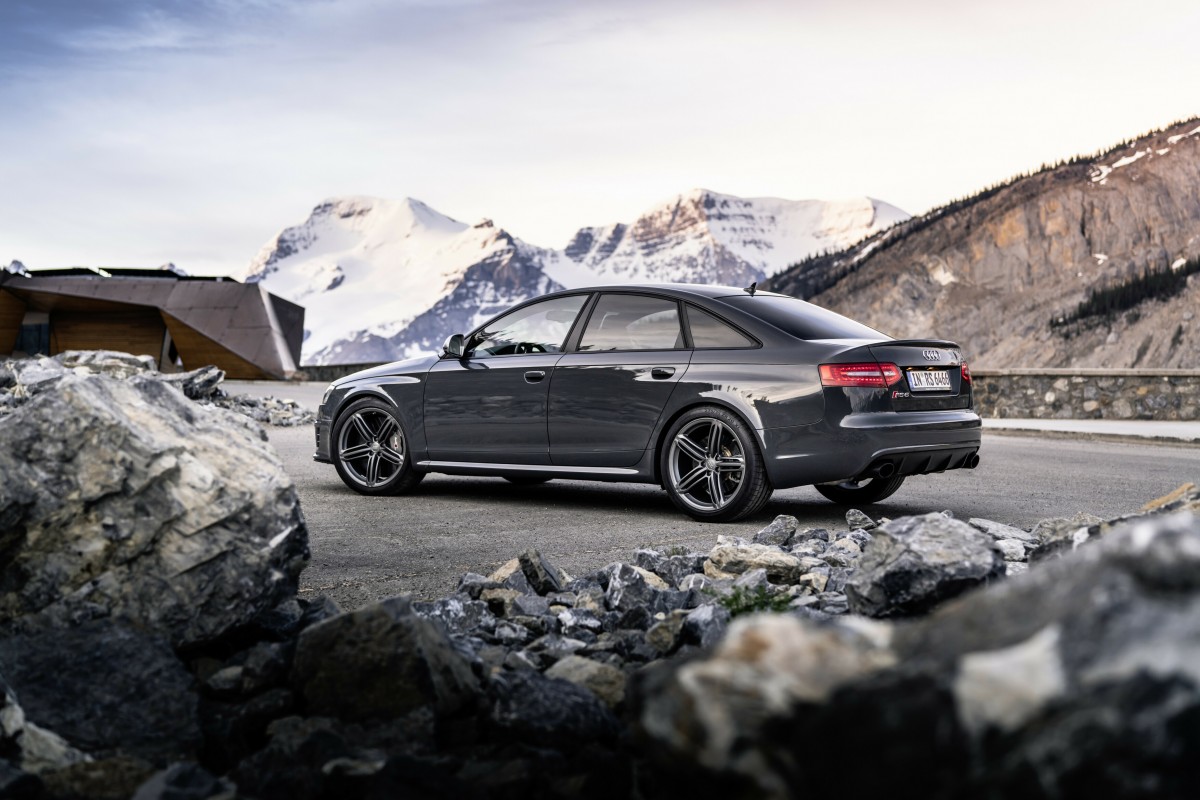 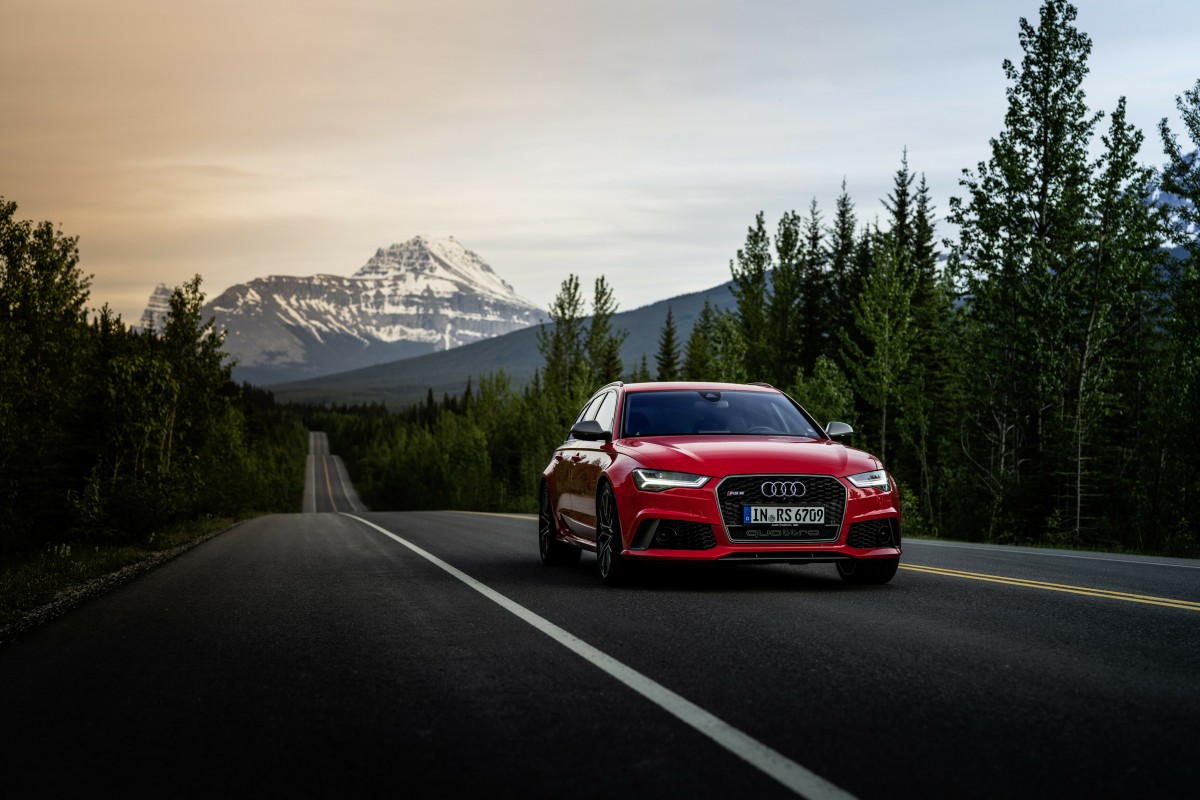 In 2013, Audi moved from the bi-turbo V10 engine back to a bi-turbo V8. The displacement also went down from five litres to four litres. It was the smallest engine in the RS 6’s history. Audi also discontinued the Sedan version. In the US, the Audi RS 7 served as its replacement. The move to a smaller displacement engine and discontinuation of the Sedan was heavily criticised, yet it ended soon. The brand had put together a package that left previous RS 6 models far behind in terms of driving dynamics and efficiency.

Another advantage was the reduction in weight. Among other things, increased use of aluminium reduced the weight of the C7 by 120 kg. Audi reduced the total mass that was laid on the front axle from 60 per cent to 55 per cent, which amounts to saving about 100 kg. Another reason was that the engine was also moved 150mm further behind.

Out on the road, dropping two cylinders and 20 PS did not affect its performance. With the new 8-speed Tiptronic and 700 Nm of torque, it took the C7 only 3.9 seconds to reach 100 kmph. Thus, its 0 to 100 kmph time was half a second less than the C6. The instrument panel also showed a top speed of 305 kmph. Like before, ceramic brakes were available as an option. In the C7 generation, they measured 420mm in the front and 365mm at the rear.

In addition to the increased performance, the C7 had 30 per cent lower fuel consumption than before. This was not only a result of the weight reduction but also technologies like cylinder deactivation. When on light loads, it made the C7 RS 6 into a four-cylinder, thus increasing efficiency.

The C7 RS 6 stood apart from previous models in every area – the drive system, suspension, comfort and efficiency. However, it still had one thing in common with all its predecessors. The C7 also switched halls during its production at Neckarsulm.

Bestseller & Market Leader In Its Segment

Over the years, Audi extracted more and more power from its four-litre eight-cylinder engine. For the first time, the RS 6 had more than 600 PS (605 PS, to be precise). It also got an overboost function which took the torque output to 750 Nm for short bursts.

Despite the initial criticism about having less power and fewer cylinders, the C7 RS 6 became the bestseller and market leader in the high-performance station wagon segment. Its successor continues to hold this top position to date. The Audi RS 6 C7 resonated around the world. 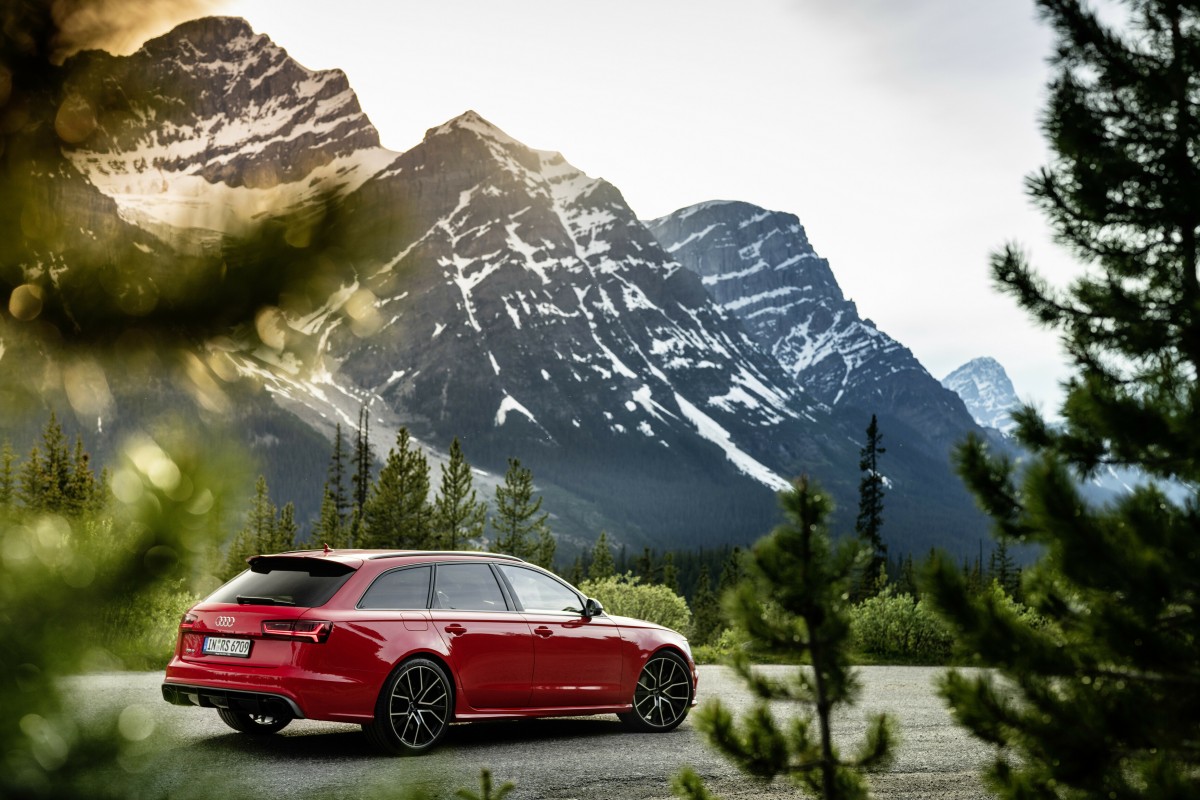 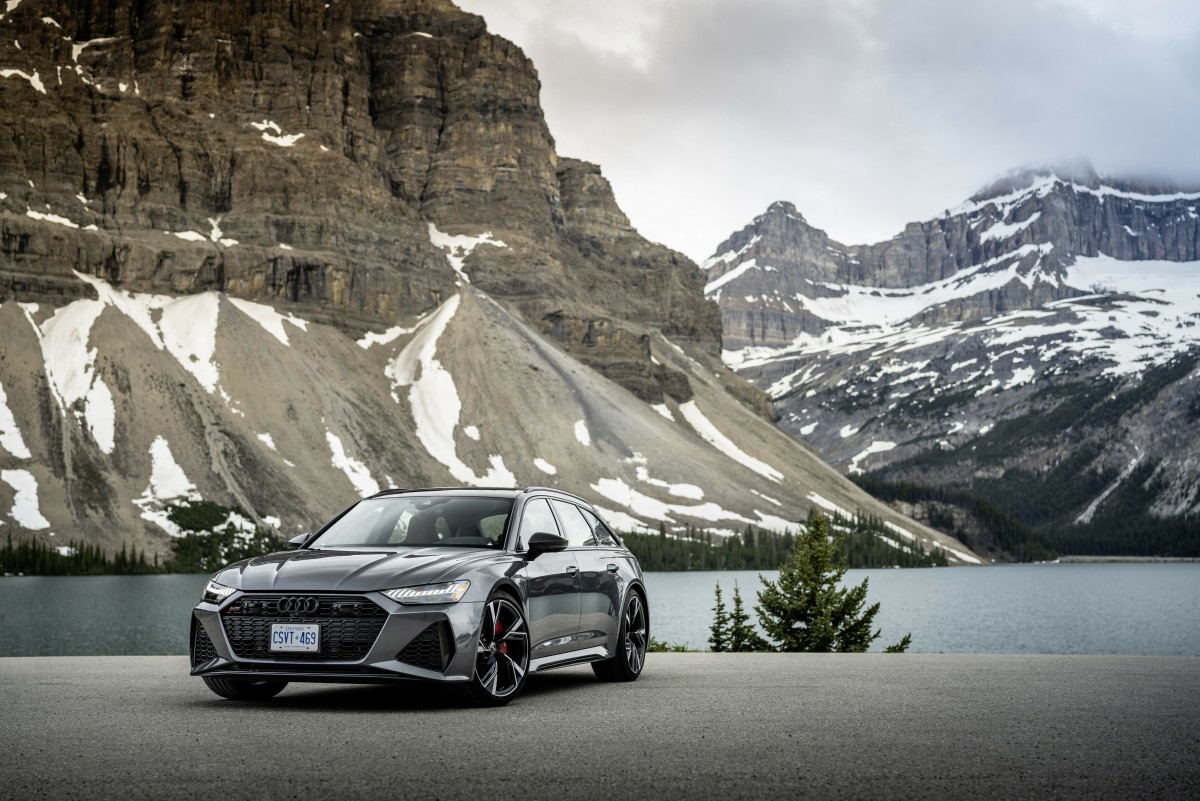 In 2019, three years before it turned 20, the fourth generation (C8) of the RS 6 rolled out the showroom floor and remained faithful to its heritage. Four litres of displacement, bi-turbo, 600 PS and now 800 Nm of peak torque. Furthermore, for the first time in its history, a 48V mild-hybrid system supports the car, further improving its efficiency. Despite putting on weight, it still manages to accelerate from 0 to 100 kmph in 3.6 seconds. Furthermore, the C8 RS 6 only needs 12 seconds to reach 200 kmph. There’s little to doubt about its straight-line performance. Additionally, the C8 also sets a new standard for itself when it comes to lateral acceleration and cornering.

New all-wheel steering, which turns the rear wheels in the same direction as the front at high speeds, improves stability. At the same time, at slow speeds, the rear wheels turn in the opposite direction to the front wheels, which helps reduce the turning radius and makes it easier to park. However, a hassle-free parking experience is not the only thing important to customers. Like before, they also wanted to take a trailer with them. More than half of European customers ordered RS 6 with a trailer hitch. This showed that they wanted a sporty drive as well as everyday practicality. Thus, Audi continued to offer the trailer hitch as an option and air as well as DRC suspension.

Where the previous RS 6 generations only stood out as power station wagons on the second look, the C8 creates an altogether different impression. Audi says even laypeople will recognise right away that the C8 RS 6 is not a normal A6. The C8 RS 6 only shares its rood, front doors and tailgate with the regular A6 Avant model. Audi altered the other components specifically for the C8. The brand also widened its body by a noticeable 80mm. Few people know that the C8 RS 6 also has an independent hood for the first time ever. All these alterations mean it can also use the Matrix LED headlights with laser lights from the Audi RS 7.

Unlike its predecessors, the C8 RS 6 is not manufactured in separate halls. It now rolls off the assembly line in Neckarsulm and is ready for the showroom floors. Audi says this also indicates how flexible these production sites are. Additionally, due to high demand, Audi introduced the C8 in the US for the first time as the RS 6 Avant. The model is evolving from a niche car to a success story that is in demand worldwide. 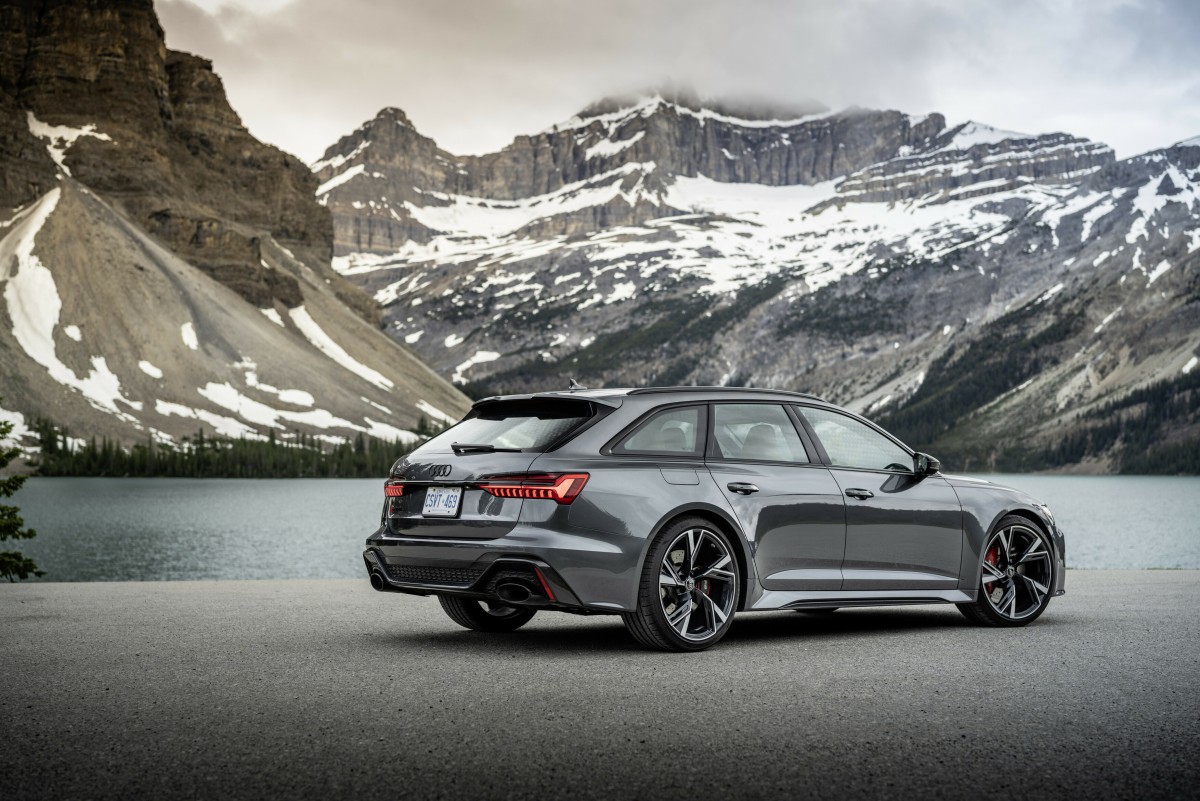 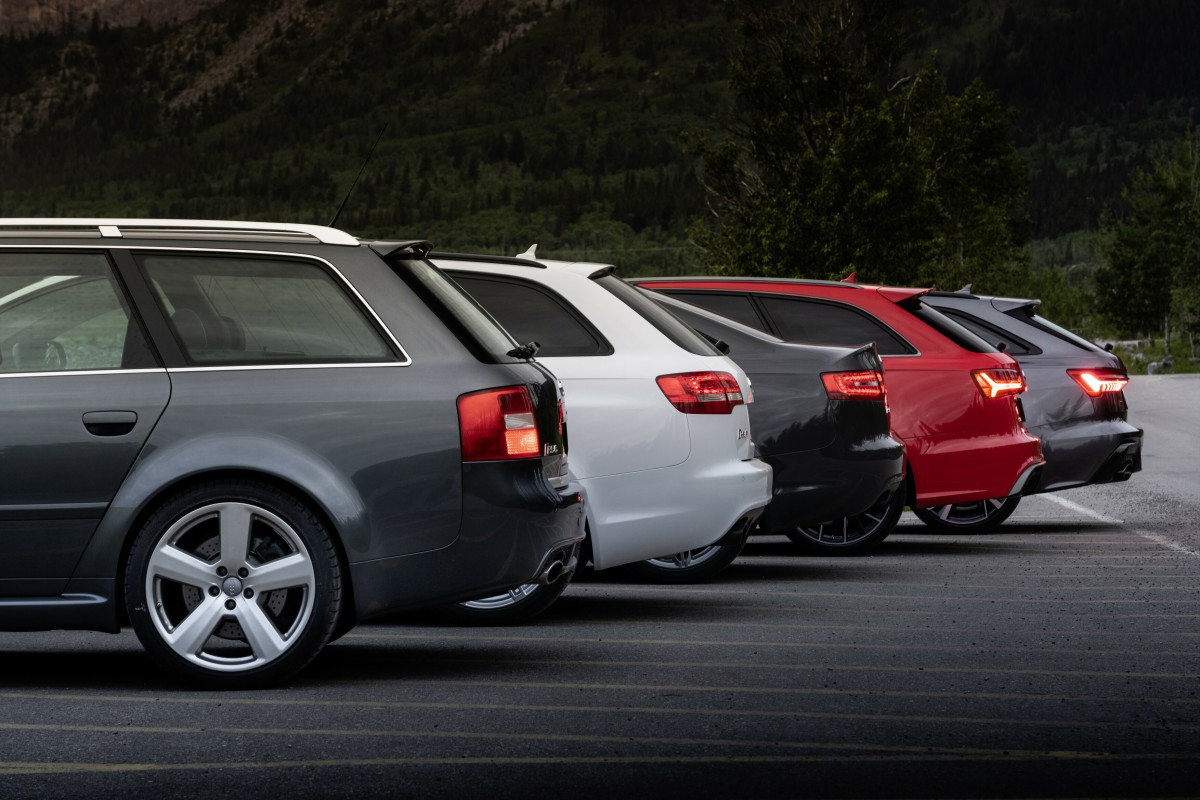